It’s hard out here for a survivor

Let me introduce you to The Refugees. They’re a hardy bunch, ten survivors who banded together in an abandoned strip mall. Every member of their post-apocalyptic community brings a little something different to the table. Oscar, or Grouch as he likes to be called, fashions himself as a lawful sheriff, quick to lend aid to other pockets of humanity and always prepared to dish out justice. Terri is a bit of a loner; a former goth teen who’s knows her way around a building’s plumbing system.

For two straight weeks, The Refugees pushed back against a world where walking, talking, and even breathing are significant detriments to a happy and healthy life. But now they’re doing alright. Life seems manageable. Oscar and his computer-loving pal Zeke rigged solar panels to their base, and a few others have secured more than enough food and medical supplies. Sure, there are zombies everywhere, but for now, The Refugees plan to feast. They all might be dead in the morning anyway. State of Decay 2 is brutal like that.

It took a few dozen hours to build up The Refugees’ resources to the point where the survivors could afford to relax. State of Decay 2 is a game where progress is measured in inches rather than miles. As a genre-bending experience that’s equal parts survival game, post-apocalyptic management sim, and action romp, State of Decay 2 has a steep barrier to entry. But to a certain kind of person — one who finds careful planning and resource management just as exciting and lopping off a few hundred zombies’ heads — this might be one of the year’s most entertaining games. 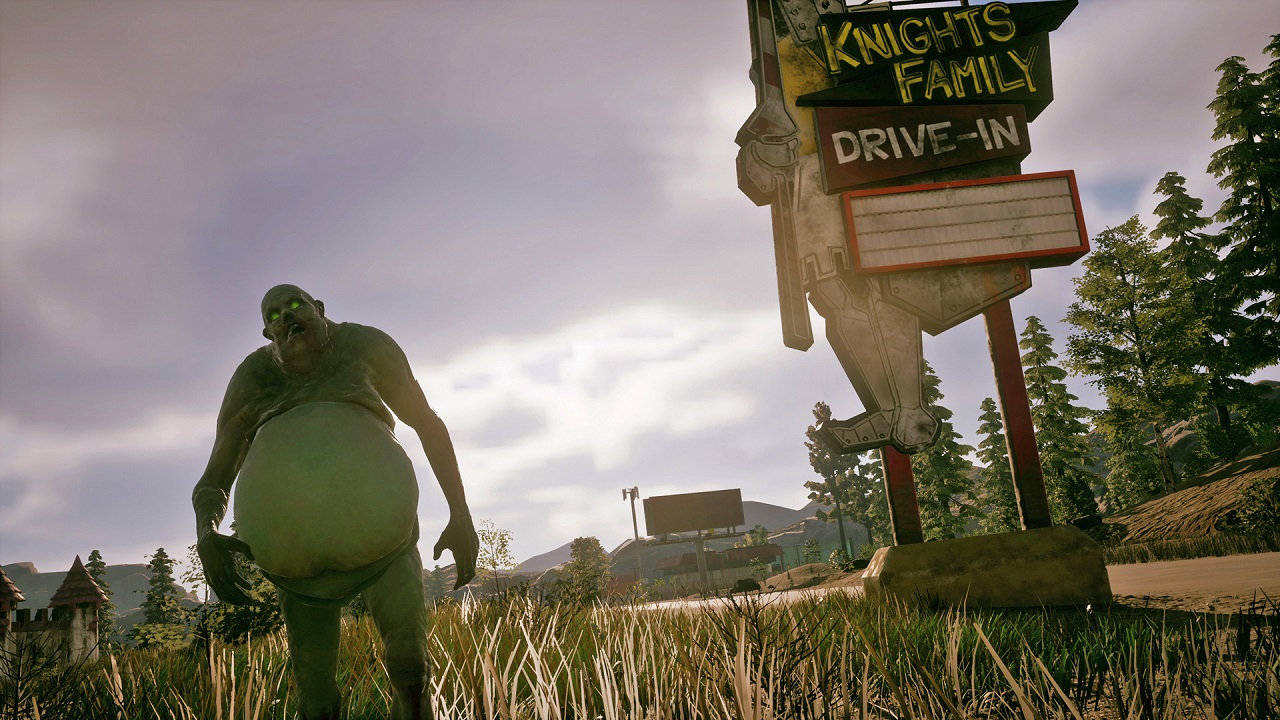 State of Decay 2 starts with little fanfare. Its opening tutorial sequence leans hard into the established zombie canon. After selecting from a roster of prebuilt, two-person teams, players see their characters racing towards a military outpost with scores of undead at their heels. Although the goal is to make contact with the army, it becomes apparent that the site’s been abandoned for a while.

With zombies nearby, players learn the game’s core mechanics like scavenging and combat, before linking up with the outpost’s last remaining humans and setting out to find a new place to call home. It’s straightforward, but the first thirty minutes do a decent job of introducing the systems and tone that will come to dominate the next twenty-plus hours. (Fortunately, veterans can choose to skip this sequence and dive right into the central part of the game with a custom group of survivors.)

And those systems — the slow-spinning process of carefully looting, squirreling away resources, and fighting zombies while avoiding their bites — are the game’s biggest draw. State of Decay 2 isn’t the prettiest game on the market, and it’s not without its rough edges, but as a piece of media that asks players to engage in an all-or-nothing approach to survival, it’s completely and utterly engaging.

There’s something powerful about the insistence on balancing long-term goals with shorter projects and dynamic events that drives State of Decay forward. Combating ever-dwindling resources by frequent supply runs and base-building upgrades might sound repetitive on paper, but within the context of the game, the process exists almost as if to say that our ability to follow a routine when the world’s gone to shit is what defines a human.

That human element informs a lot of the design choices. State of Decay 2 relies heavily on randomization, ranging from the available loot in searchable containers to the pockets of survivors scattered about the map and even character personalities and traits. Every person has a unique backstory that manifests in varying quirks and passive abilities. Attributes like “awful singing voice” are just as meaningful as “surgeon,” as every little detail causes ripples in a community’s collective morale. Similarly, as survivors raise their status within a community, they unlock specializations and pre-defined classes, like a Warlord, that open up different questlines and facilities.

Despite being a randomly-generated collection of survivors, seeing how different characters you recruit interact and affect one another not only makes for colorful conversations, it also drives the game forward, as players can switch between their community members whenever they’re at a base. Using the same survivor for too long means they’ll become fatigued and accruing too much damage means they run the risk of serious injuries, so swapping characters is vital to survival.

It’s a good thing, too, because State of Decay 2 gives players plenty of latitude when it comes to interacting with the world. After completing the tutorial sequence and securing a starting base on one of the three different maps, the game throws an overwhelming amount of information at you. In addition to looting and combat, concepts like base-building, outposts, and trading are rapidly introduced. The deluge of mechanics and steady decrease of resources can seem as insurmountable as an army of zombies, but by exploring — cautiously at first — and getting your feet wet, State of Decay 2‘s gameplay loop is compelling. What initially seems like an opaque list of potential chores becomes the rites of a ritual that, when completed, means you just might live to see another day.

And so, the bulk of a player’s time in State of Decay 2 revolves around addressing their community’s ambient needs while trying to take back some land from the zombies. Scattered around the map are locations overrun by Plague Hearts, which require preparation and serious firepower to topple. Destroying these infestations is the survivors’ primary long-term goal while establishing outposts — places that, once cleared of zombies and fully explored, can be claimed for a daily boost to resources — and crafting new base facilities (or relocating to a bigger stronghold) make up the more immediate action. Along the way, it’s not uncommon to hear radio requests from other groups in the area. Choosing to interact with factions adds another layer of tension to the mix. There’s no way of knowing if your new neighbors are amicable, scrappy scavengers or a group of cannibals. Whether or not players interact with other survivors is entirely up to them, but more often than not, the jobs they need help with end with valuable material rewards. 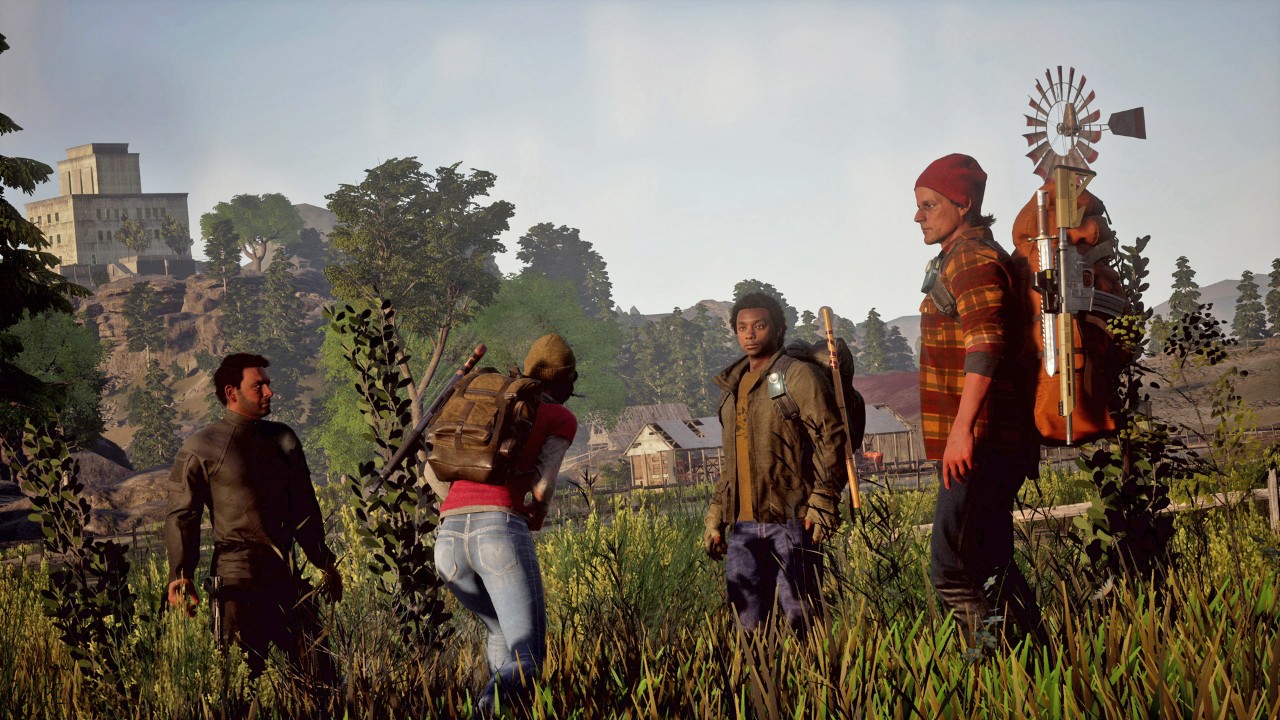 During moments when there are few immediate concerns, proactive players can use a survivor’s radio to hone in on specific supplies, locate Plague Hearts, contact nearby communities, and initiate multiplayer sessions (in which four players can play cooperatively). Using the radio requires spending Influence, State of Decay 2‘s catch-all currency, but its benefits far outweigh the costs. Because there’s always so much happening during minute-to-minute gameplay, it’s easy to forget about the radio services, but it’s a useful asset whenever your supply cache is looking thin.

For as entertaining as its various systems are, State of Decay 2 isn’t a perfect game. It lacks a few obvious quality-of-life features, like an easy way to swap items between survivors when they’re exploring in a team and a less cluttered inventory system that can be read at a glance. These annoyances are compounded by technical hiccups, collision issues, and wonky physics that are frustrating at best and quest-breaking at worst. Fortunately, the radio has an “I’m stuck” function that warps characters back to their last stable location, which helps alleviate the pain of losing progress.

State of Decay 2 comes together as a game that feels designed for players who like to make checklists and chip away at long-term tasks. That notion might sound contradictory to existence in a zombie apocalypse, where death comes fast and often, but engaging with the game from this perspective makes its rough edges seem more like minor smudges. State of Decay 2‘s unique approach to survival and management might not appeal to everyone, but it certainly feels like an instant cult classic.