You must learn control

In the time since I posted my review-in-progress for Star Wars Battlefront II, EA temporarily halted the sale of in-game purchases. “This means that the option to purchase crystals in the game is now offline, and all progression will be earned through gameplay,” the company said. “The ability to purchase crystals in-game will become available at a later date, only after we’ve made changes to the game.”

When exactly microtransactions will return and to what extent isn’t yet clear. But I do know this: even without the option to spend real money on loot crates that award randomized Star Cards (active abilities and passive boosts) for character classes, ships, and heroes, there’s no escaping Battlefront II‘s unpleasant progression system. It’s good that the real-money option is gone for the time being, but there’s much more work to be done, and it needs to come to fruition sooner than later. 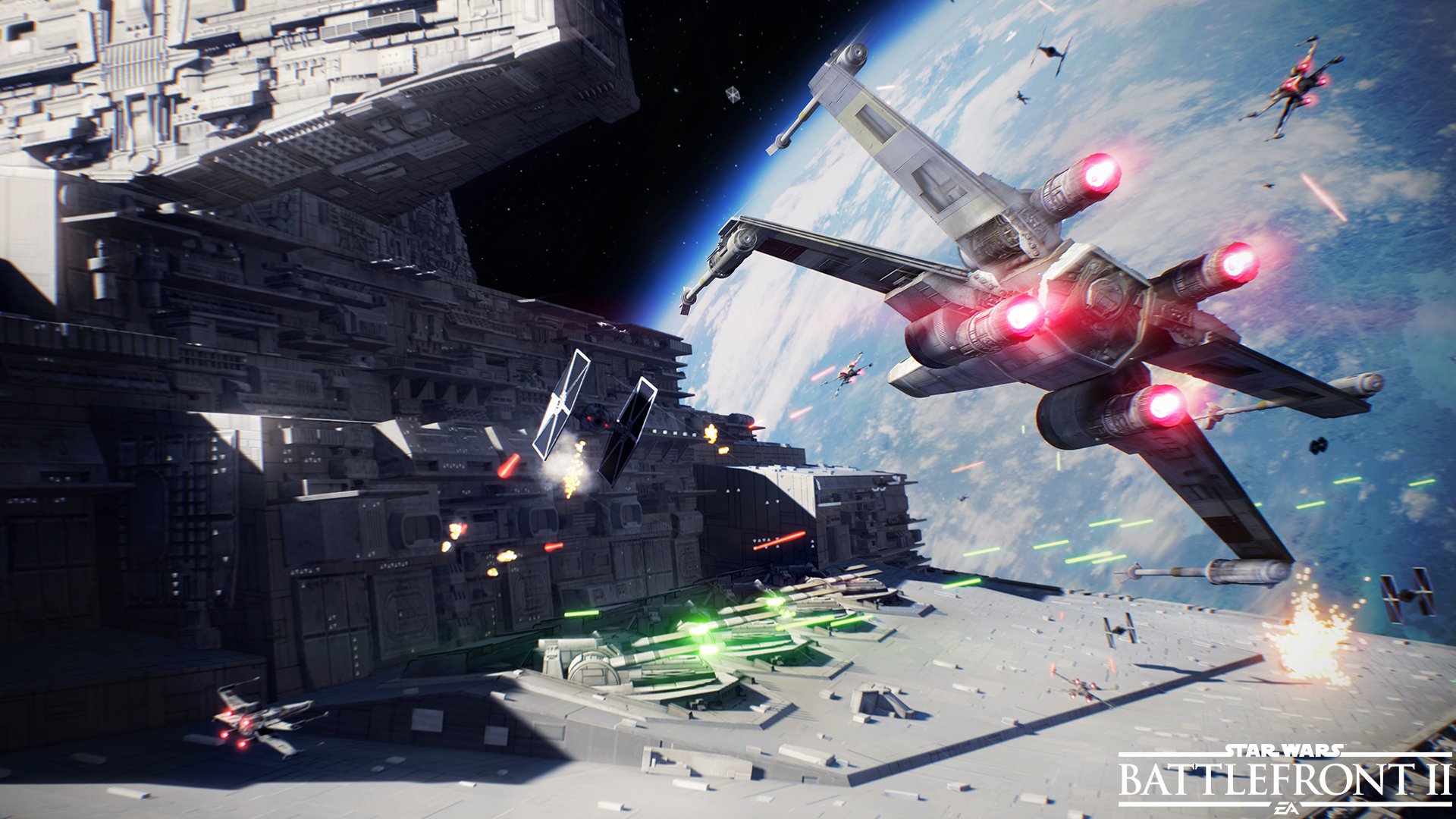 My assessment of Battlefront II‘s story campaign hasn’t changed one bit, so if you’re mostly curious about that aspect, consult my review-in-progress. I found it to be adequate on the whole. It’s of course stunning from an audio-visual perspective, much like the rest of DICE’s work, but the mission design is wildly uneven and it plays things much too safe with an over-reliance on key Star Wars figures. If you’re eager to take a break from the rebellion and step into the shoes of an Imperial commander, you will almost certainly be left disappointed. Despite what the trailers show, this isn’t really that game.

The multiplayer portion is about what you’d expect, though, especially if you played the last Battlefront and have kept up with recent backlash surrounding the sequel. Not every mode and character made it over, but what’s here is an okay start. You’ve got the grand spectacle of Galactic Assault’s 40-person battles on maps like Naboo and Hoth; the smaller, more tactical Strike; and Blast for folks who want no-nonsense team deathmatch. My enjoyment of these three modes has varied a great deal in my 20-some hours with the game, particularly when it comes to Galactic Assault. It can be a slog.

With the way certain maps are laid out, it can feel like you’re repeatedly sprinting to your all-too-inevitable death. You might be the one who finally breaks through a choke point to achieve tangible progress, but more than likely you’ll stare down a firing squad of defenders, step on a grenade, or run up against a powerful hero or villain character and waste another of your team’s lives. Battlefront II tries to spawn players in groups of up to four in the hopes that they’ll stick together and have their chosen classes (assault, heavy, officer, specialist) complement one another. That sure would be nice. In reality, there isn’t enough incentive to encourage focused, sustained cooperation. People tend to do their own thing because squads are so haphazardly assembled and they don’t have the tools to communicate.

Heroes vs. Villains and Starfighter Assault have proven more interesting, at least for me. The former mode has teams of characters like Darth Maul, Yoda, Lando, and Kylo Ren trading blows in an effort to protect their (regularly shifting) VIP while also taking out their opponents’. It’s not the most balanced format in practice, but it’s a step up from what we had in 2015’s Battlefront; you’ll always get to play as iconic characters instead of being forced to wait your turn as a random soldier. That said, DICE has disappointingly gated Luke, Darth Vader, Palpatine, Chewbacca, Leia, and Iden (the story’s protagonist) behind in-game-currency purchases. In an already stingy game, this decision is downright irritating.

I didn’t get much out of Battlefront‘s simple take on aerial combat, but that’s what I keep coming back to this time around. Starfighter Assault is by far my favorite thing here. The ships still have that arcadey sort of feel, but now, levels unfold like significant battles with dynamic objectives to either attack or defend as opposed to mere dogfights. It’s not quite Rogue Squadron, but hey, we’re getting there.

Lastly, it’s worth noting that Battlefront II lets you play multiplayer against the AI. There are only two modes available here (Team Battle and the one-versus-many Onslaught), but you do have control over modifiers like your team size and total life count, the AI difficulty, which classes are allowed, how quickly abilities recharge, and what kind of minimap there is if at all. There are also 16 preconfigured Battle Scenarios you can hop right into if you don’t want to mess around with modifier settings.

If this is generally sounding all right so far, yeah, it should. Most of my complaints from BF1 were addressed (or at the very least attempts were made), and while the gunplay still feels straightforward compared to other competitive shooters, I think there’s a tad more nuance and longevity. Unfortunately, the experience is brought down by out-of-game annoyances. Making progress with your characters is a slow, convoluted, and actively unpleasant process because it’s nearly all tied to loot crates. (Notably, it’s possible to unlock weapons and weapon mods by reaching in-game milestones.) Rather than break it down beat by tedious beat, I’ll summarize: you’re going to unearth a lot of stuff you don’t want in these boxes, and you can’t avoid this scheme because everything you play as in this game is individually leveled up based purely on how many Star Cards you possess and what tier the cards are. 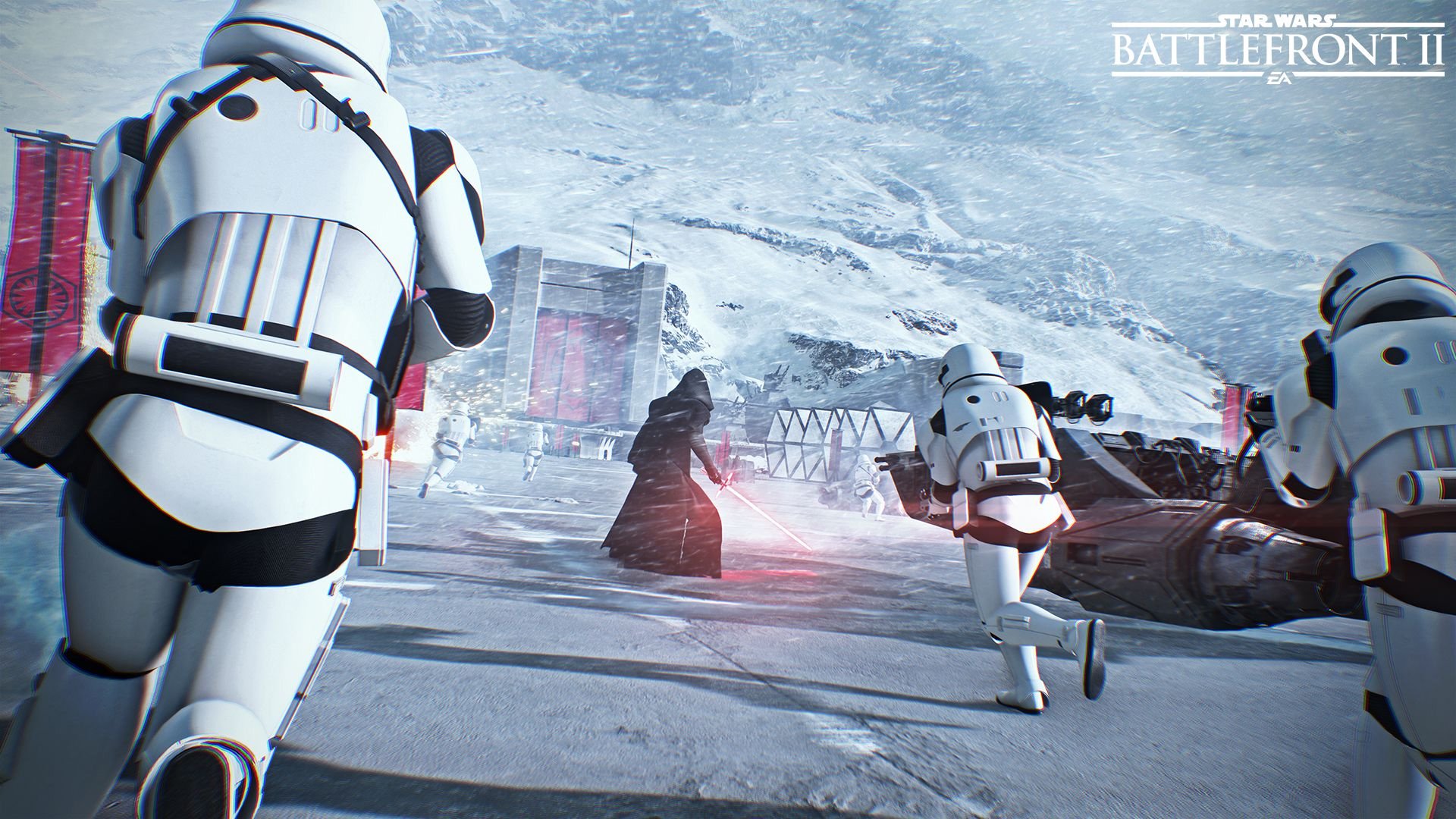 You’ve probably seen angry posts about this stuff. They aren’t wrong. The progression system is so off-putting. Worse yet, it only gets slower and more frustrating the longer you play. There are also balance concerns at the back of my mind. Star Cards can do things like increase your ship’s maximum health by up to 20% or give your long-range specialist up to 25% explosive damage protection. EA may have temporarily stopped letting people spend real money on loot crates, but that doesn’t address the numerous foundational issues with the way Battlefront II handles ability loadouts and unlocks.

Are these practices enough to sour the rest of the game? That’ll be up to you and your tolerance level. As much as I loathe this implementation of loot boxes, I still keep playing Battlefront II and I will probably continue to do so on and off. I mean, I do like the game. I just wish it wasn’t being squandered like this. You’d be well-advised to wait until overhauls arrive — assuming they ever do.