Sorcery was announced before the PlayStation Move had even graced a store shelf, and it quickly became the most promising motion title out of Sony’s small stable of software. Unfortunately, the spell-slinging adventure never made it in time for launch, with the Move launching in 2010 and this review appearing in the wonderful future universe of 2012.

It’s a long time to wait for what has been, quite frankly, the only game designed explicitly for PlayStation Move that has looked original, unique, and geared toward the typical PS3 consumer, devoid as it is of inane carnival minigames while making use of the criminally ignored navigation controller.

Nevertheless, over a year and a half is a long time to wait for anybody who bought a Move and expected it to have more uses than as a gimmicky alternative controller for first-person shooters. At the risk of ending this introduction with a trite question, one has to ask — can a single late game justify the PlayStation Move? Sorcery cannot answer that question because, if there is a game that can do it, this isn’t going to be the one. 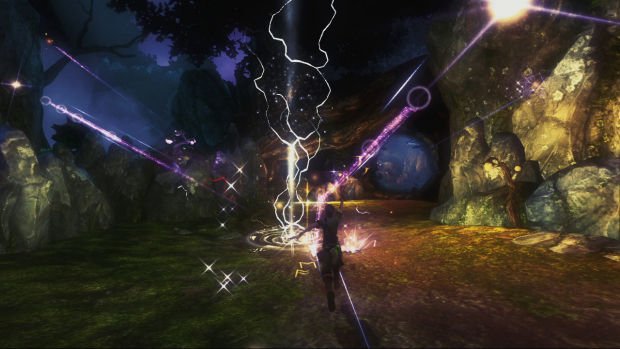 Sorcery tells the story of a boy apprentice named Finn who, true to the stereotype, just cannot help playing around with his master’s magic when nobody’s looking. Aided by a talking cat named Erline, the apprentice sets off on an adventure to stop the Nightmare Queen before she does something generically evil. A relatively light and family-friendly story, Sorcery‘s narrative presentation relies on comic-style cutscenes and lame jokes in a manner not unlike last year’s “big” Move title, Medieval Moves. Luckily, Sorcery manages to stay a step above that particular title, despite the similarities.

Armed with a Navigation controller and PS Move, the player controls Finn in a traditional third-person manner, pressing X to dodge and L1 to center the camera. The Move is used to control our hapless apprentice’s wand-bearing hand, where a flick of the remote sends a bolt of arcane energy in a direction vaguely corresponding to one’s physical movements. Yes, despite the Move’s 1:1 control, Sorcery wisely adds a dose of aim assist to make sure you hit targets at least 70% of the time. Magic spells often have an alternative use, usually triggered by sweeping the Move across a wide arc to curve shots, create area-of-effect traps, and other such useful tricks.

Naturally, there is some banal busywork involving turning keys in locks and waving the remote from side to side in order to sweep obstacles from a pathway, but the vast bulk of the game involves combat versus a range of melee and ranged enemies, as Finn runs through fairly typical levels consisting of winding corridors broken up by large enemy-rich arenas. While the idea of motion-controlled arcane battling is a noble one, the limitations of the technology leave much to be desired, and it seems nobody was interested in working around those limitations, only plowing blindly through them.

The biggest obstacle is the targeting system and associated camera issues. When enemies are present, Finn will automatically alter his movement to strafe mode, while the camera will focus in the direction of the most salient threat. Of course, the game’s idea of a pressing threat is not always the player’s idea, since its camera cannot cope with large rooms of enemies that may be coming from multiple directions. When the game chooses to focus on an enemy, it will almost always stay focused until that particular opponent is dead, even if there are monsters behind or flanking Finn that are far closer and more worthy of attention. This becomes especially frustrating when facing elemental enemies that require certain spells to defeat, forcing the player to change their tactics on the whims of the game, rather than making any decisions for themselves.

When the camera isn’t completely failing, you’re left with a fairly typical shooting game in which the only real objective is to run around, firing at stuff with magic until all lies still. To do that, expect to be snapping your wrist back and forth like you’re practicing for the national Wank-a-thon, because you’ll be cracking that remote around at a rapid pace. In truth, there is some pleasure to be had in the fast-paced action, though it’s a shame that the only real attempt at difficulty comes by way of the, “just throw as much at the player as possible” variety. Often, victory comes down to base attrition more than skill, especially when projectiles are being thrown at such a rapid pace that Finn literally cannot fire back without taking at least some damage, or enemies repeatedly knock him to the ground and hit him again as soon as he’s stood up. Outside of these inelegant spikes of annoyance, the game remains fairly easy.

Things get a little more interesting in the latter half of the game, once players have unlocked elemental spells to augment their standard issue bolts. Finn is drip-fed a range of spells corresponding to earth, ice, wind, fire, and lightning, with each elemental bolt behaving in a different manner. Even better, spells can be combined in a variety of ways to create deadly hybrid attacks. For instance, Finn can use the fire spell to draw a wall of flame in front of him, then shoot regular bolts through it to create fireballs, or he can summon a whirlwind and charge it with a lightning shot to create an electrical storm. 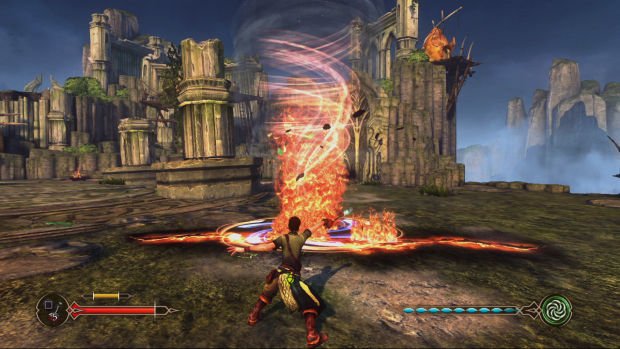 The tactical potential of spell combinations really opens up the combat, showing off a great deal of potential that could turn a mundane shooter into a compelling one. Sadly, that potential ends just a few yards from the starting gate, with only a handful of spell combos available and even less worth using. I also despise the method of spell selection, which is done by holding a button and waving the remote in one of five swirly directions, so similar to each other in motion that the game often selects the wrong one. It’s almost depressing, how predictable these problems with motion controls are, and how unaware of them developers seem to be. It would be an easy fix — have an actual selection wheel, a’la Ratchet & Clank, or something similar. You could even still keep the precious gestures that way. Instead, everything has to be done with swirly motions, because user-friendliness once again takes a back seat to gesture showboating.

One thing to really enjoy with Sorcery is the upgrade system. Finn doesn’t level up in a traditional manner, but instead uses potions that enhance his abilities in a variety of ways. Potions are brewed by purchasing or finding ingredients and combining three of them, provided you have a potion bottle in your inventory. These potions increase health, mana, and the effectiveness of various spells, with a few joke upgrades thrown in for good measure (being able to turn into a pie ingredient, for example). Once the correct ingredients are discovered, players create the potion themselves by grinding, sprinkling, and stirring with the remote. They can then shake the Move and make a swigging motion in order to ingest. It’s simple and silly, but I actually rather enjoyed the downtime between combat that the potion mixing provides. I just wish the same drinking motion wasn’t required for health potions. There’s nothing quite like having to wave one’s arm around, utterly defenseless, in the middle of a fight. 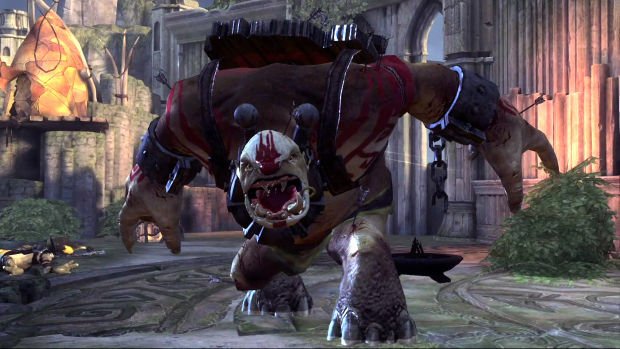 Sorcery is not without its fun. At times, the frantic fighting can get a little exhilarating, and one can’t help but love summoning a whirlwind, setting it on fire, and shooting the defenseless monsters trapped within the blazing storm. I also love how, for once, the colorful ball on the end of the PS Move actually corresponds to the gameplay. For instance, if you shake a health potion, the ball will glow a soft pink and gradually darken to a deep red, simulating the potion itself as it mixes and becomes consumable. Different potions and activities will cause the Move to glow in various colors, which may only be a minor aesthetic detail, but remains genuinely amusing.

Still, for all its promise, Sorcery is nowhere near good enough to justify the wait for a killer PlayStation Move title. In many ways, it still has that “tech demo” feel to it, a game of potential without much in the way of substance. Over the five or six hours it may take to beat, the game never evolves to any remarkable degree, and never becomes about the player as a masterful, powerful spellcaster. There are ideas, hints of brilliance, but no crescendo at the end of all that build. Perhaps if it had managed to launch alongside the Move in 2010, Sorcery might have looked better, but we’re so far past the need for demonstrations of technology, and the Move needs games that capitalize on its potential, rather than simply showcase what could be. It’s time motion control moved beyond the gimmick stage, if it can, but Sorcery seems content to still wallow in the mindset that gesture control exists simply to promote gesture control. 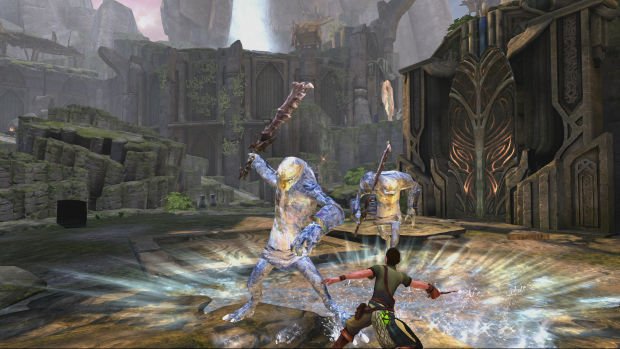 For those desperate to use their Move controllers in something exclusively centered around the Move, Sorcery provides a few hours of inanity that can be gratifying, if in a slightly underwhelming way. Still, the game’s chaotic camera and unwieldy controls can frustrate, not to mention the alarming tendency for the PS Move to need consistent recalibration. Had more been done with its most promising features, and had it dropped the arrogant insistence on using gestures for almost everything, Sorcery could have been the hybrid of old and new game design that Sony promised. Instead, we’re left with a game that, for all its possibilities, simply lacks the imagination to step beyond the same old experiences we’ve had before, along with the same old problems.