Space sims aren’t where they used to be. Once the peak of triple-A development, today the genre’s torch is carried mostly by outfits catering to hardcore, nostalgia-seeped joystick-grippers. And while that approach has proved profitable for independents and niche publishers (and gamers still willing to consult printed control reference charts), it hasn’t exactly lit up the lasers of the main stream.

Seamless Entertainment has attempted to change that with SOL: Exodus, trying to translate the thrill of space-based shooting for a generation steeped in more ground-bound warfare.

While it’s still too early to tell whether or not their efforts will pay off, I am happy to report that they’ve succeeded in creating the accessible, exciting spacefighter sim they aimed to deliver. 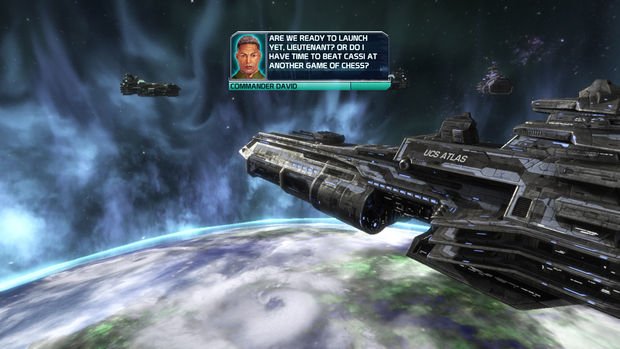 SOL‘s premise will be familiar to most anyone with a cursory interest in sci-fi. The solar system is dying, and humanity has sent out countless expeditions to find new worlds fit for colonization. The UCS Atlas has finally found a suitable planet, but is attacked by the Children of Dawn, a cult of sun-worshiping fanatics intent on keeping humanity in the solar system until the final day of supernova-borne rapture. And by “rapture” they mean “extinction.” Now the Atlas must race home to spread the word while fighting off the faithful.

The plot draws heavily from Battlestar Galactica, with its hook of a lone ship journeying home whilst battling an implacable foe. One mission even lifts its setup from a particular episode of Ron Moore’s 2004 remake.

The familiarity extends to the game’s music, as well. Heavy on tribal-sounding drumbeats and strings, SOL‘s soundtrack is like a mash-up of Homeworld‘s and Galactica‘s aural aesthetic. The plot isn’t quite as complex or self-serious as either of those two productions though, opting to strike a pleasantly campy tone. The main antagonist in particular deserves praise for hamming it up in the best traditions of Khan or Emperor Palpatine. 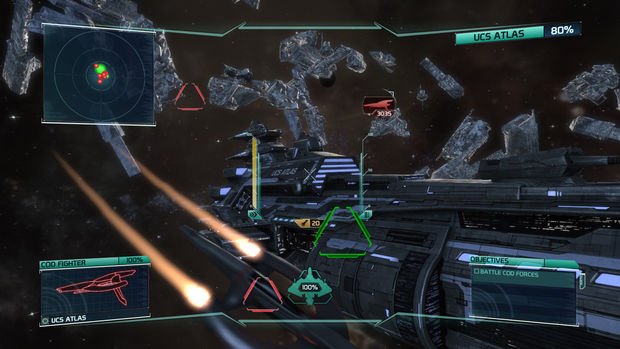 Early on, Seamless Entertainment billed SOL as merely the “first half” of the Atlas’ saga, prompting worries that the game would be an incomplete experience. No need not fret, though, because SOL‘s relatively short seven-mission campaign (which I completed over the course of a weekend) wraps up neatly, while leaving room to anticipate a sequel or expansion. Thus, even if SOL‘s second half never materializes, players won’t be left wanting.

They also won’t be left wanting for a good weekend’s worth of shooting things among the stars. SOL‘s combat is fast and hectic, with your tiny spaceship flying into veritable clouds of flying fanatics, firing noisy machine guns and fiery homing missiles. Larger bombers and gunships can be dispatched using a heavy Arc Cannon, which fires off with a hearty electrical crackle.

The thing that might disappoint gamers looking for the next Freespace, Freelancer, or Elite is the fact that SOL: Exodus isn’t quite those things. It’s much more “space shooter” than “space sim.” You won’t be rerouting power to shields — there are no shields, for one — or launching countermeasures or buying and selling space commodities. For that matter, the weapon selection I’ve outlined above is the weapon selection. Besides a basic upgrade system (players can allocate points to boost their weapons, health or speed between missions).

Then again, the pace of combat is too fast to allow for such distractions. A “slide” button can be held down to keep the ship moving in one direction and facing another, but that’s pretty much the extent of advanced tactics in SOL, with one exception. 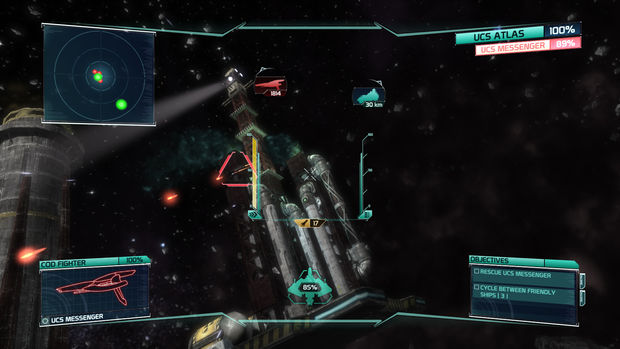 That exception is, of all things, a hacking mini-game. That’s not as bad as it sounds. In fact, it’s actually pretty novel, and the main way by which players will deal with big, otherwise invincible capital ships. At points in each mission, various communication relays on each capital ship can be targeted and hacked in real time. The minigame itself is simple, just involving picking a password that briefly flashes on screen. The results, though, can be dramatic.

Hacking a target will allow pilots to get up to all manner of hi-jinks, including sabotaging a ship’s engines (to keep it from closing with the Atlas), turning its missiles or turrets friendly (thus significantly thinning the opposition), and eventually highlighting weak points that can be attacked with the Arc Cannon, destroying the enemy in dramatic fashion.

Speaking of dramatic fashion, SOL‘s graphics are high-tier. Surfaces are shiny, the blackness of space is overflowing with color, and particle and smoke effects fill even the most mundane scenes with activity and detail. Combined with the quick action and flashy special effects, every SOL dogfight feels like a whirling storm of bullets, lasers, bright target brackets, and raining space debris.

The game supports keyboard-and-mouse controls, gamepad controls, and traditional joysticks, with all options available for simultaneous use. Given the pace of combat, I preferred to use a mouse for extra precision it affords. Chasing lead indicators at those speeds isn’t as easy on a joystick or gamepad. 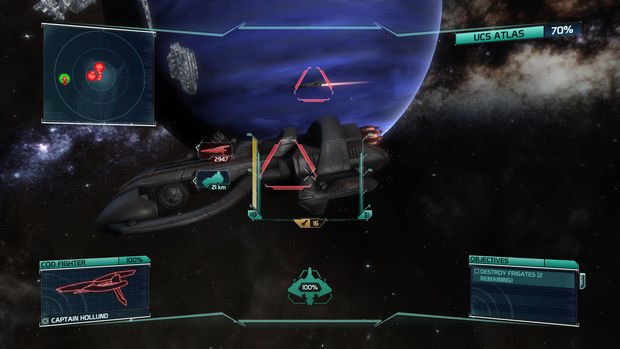 It’s fortunate that SOL is as short as it is, because it tips its hand a bit early, revealing a disappointing lack in variety. The Hades fighter’s three weapons are all the weapons players will ever get, and the Children of Dawn only ever field a handful of enemy types. Capital ship engagements, a hallmark of classic space shooters, never approach a significant scale, and mission types skew in favor of simply defending the Atlas or some civilian craft from waves of enemies flying in from opposite sides of the map. There is also no multiplayer option, with the game more bent on inspiring competition via online leaderboards for the existing campaign missions.

A few missions do stand out as beacons of originality, and are among the more memorable incidents I’ve played. I shan’t spoil them here, but other, grander space games (or perhaps SOL‘s sequel) would do well to use such experiences as inspiration.

Further still, Seamless has demonstrated an impressive amount of post-release support. Within days of release several design decisions I would have complained about in this very review were fixed, and one rather unenjoyable mission was rewritten and rescripted completely, with Seamless stopping short of generating entirely new assets. SOL has definitely not been a “ship-it-and-forget-it” release for them. 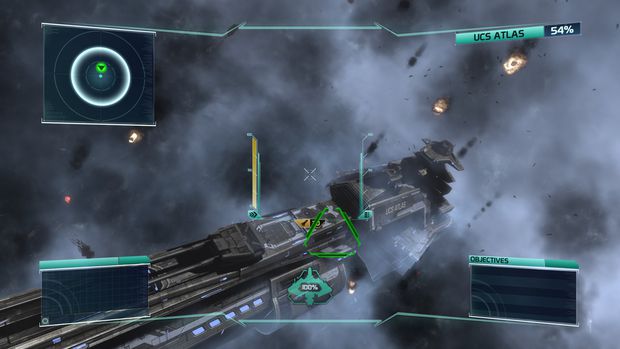 I try to avoid taking price into account when reviewing games, especially with pricing as fluid as it is in the age of Steam sales. One person’s $60 game could be another person’s torrented game, and “I’ll wait until it’s [x amount of money]” is one of the most discouraging comments a gamer can make, whether they know it or not.

That said, SOL: Exodus is being sold for a paltry $9.99 on Steam, before sales. It’s a superlative amount of content and refinement compared to many so-called “triple-A” productions that sell for six times that amount. Anyone looking for a good space dogfight should feel obliged to give it a try. It’s even got a demo!