It seems like these days everybody and their gran thinks they are photographers, and where once the only people with cameras on them at all times were press photographers, now we all have them in our pockets. It was only a matter of time until the fad of documenting one’s life in pictures wormed its way into the hobbies of automatons; robots are always trying to copy humans, and they always try to get one up on us, too.

Armed with a super-powered camera, Pic, the the metallic protagonist of Retro Affect’s Snapshot, has made the last week hell for me. The developers now owe me the deposit on my flat, which will undoubtedly be lost to me thanks to a hole in my bedroom wall, and my beautiful voice, which has now been rendered hoarse through hours of shouting. Snapshot is a delightful puzzle platformer, and I hate it so very, very much. 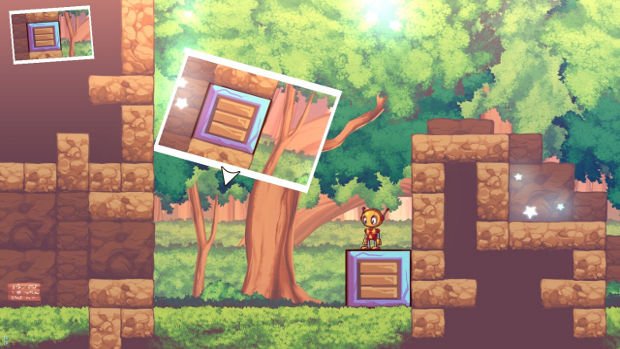 When Pic crash lands on an alien world, he immediately starts to chase a pretty little butterfly — what else would a stranded robot do? His glowing lepidopteran guide draws him through a changing landscape laden with obstacles and pitfalls, all of which must obviously be overcome by the chipper little robot. Luckily, he has two skills in his mechanical arsenal which keep him in good stead throughout his challenging journey: his trusty camera, and some rather springy legs.

His camera isn’t just for taking black-and-white pictures of old people or falling leaves in autumn, it’s a significantly more awesome and unusual device than that. Certain objects in the world, after being photographed, can be returned to reality in a different location. Controlling Pic with the keyboard and his camera with the mouse couldn’t be more intuitive, though the high-jumping robot can be somewhat imprecise at times, making some of the platforming a little bit frustrating.

At first, things are incredibly simple, and shifting boxes to reach places too high up to jump to is the main use for the camera. New objects start getting introduced quite quickly, however, and it’s not long until physics starts to play a role and things begin to get tricky, eventually crescendoing with some downright evil obstacles. 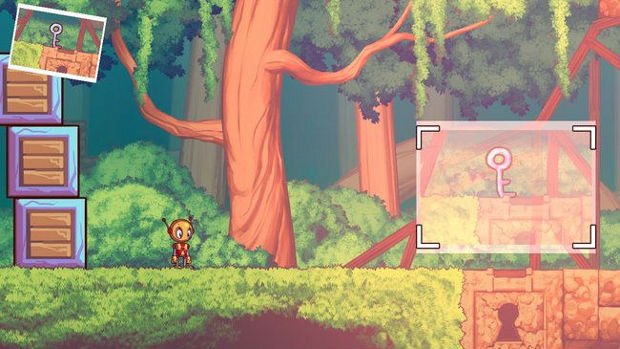 Objects photgraphed in motion retain their momentum after they are placed back in the world, so a falling object can be turned on its side and fired at another object like an absurd missile, and shapes in the background can be turned into new objects in the foreground if photographed at an appropriate angle — what I’m getting at here is that Snapshot can be devilishly clever.

The small stages range from gorgeous and simple, to incredibly intricate and sometimes sadistic, but they are all possible to finish rapidly. The par times for each area sometimes border on the ridiculous, at least if you are as lacking in coordination as I appear to be, and I must admit that I only managed to get a few after several attempts.

Beyond the challenge of the puzzles and trying to keep the speed up, there are some less welcome elements. Death is introduced early on, with Pic dying should he fall into spike pits, and this causes the level to reset. With such small levels, one might not consider that a big problem, but repeating some of the more common or infuriating puzzles over and over again because of the occasionally imprecise controls can be something of a chore. 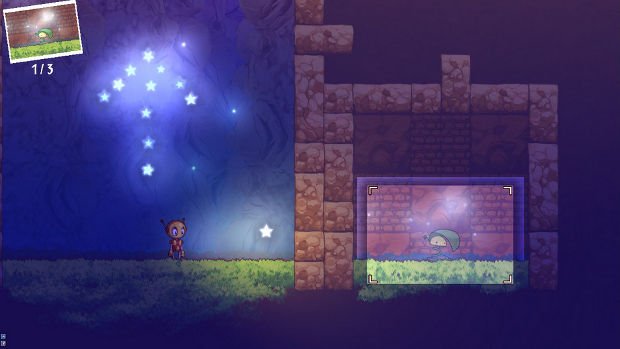 In the second part of this alien world, Pic starts to encounter hostile things and all of a sudden damage is introduced. These more dangerous levels rank amongst the game’s most inventive and made for some extremely intense moments of action packed photography; Frank West would have shed a tear. With the camera, enemy projectiles can be used to knock blocks out of zones where photography is banned (surely the location of a tiny secret military base) or smash walls. The world isn’t all mean, as friendly animals can aid the snappy robot in his journey. Elephant trampolines, crab elevators, telepathic monkeys — I never knew animals could be so damn useful.

Each level comes with three extra goals on top of just getting to the end: Pic can collect stars, the crack of videogames; photograph hidden objects, usually in those hard-to-reach places where even a back-scratcher isn’t enough; and complete the level in the aforementioned par times. They give the wee areas a little bit more meat, and make for a wonderful impetus to replay some of the really clever ones.

The vibrant 16-bit inspired art and upbeat soundtrack make Snapshot a very welcoming title, which goes a long way to offset the fact that it may very well kick your arse a few times. Even if you aren’t interested in racing through the game and solving puzzles at breakneck speed, the often complex design and the whimsical nature of the game make a slower-paced playthrough just as enjoyable. The puzzles and photography definitely overshadow the platforming, but generally they are so well integrated that the whole package is very solid. Unlike my wall. Which still has a hole in it.