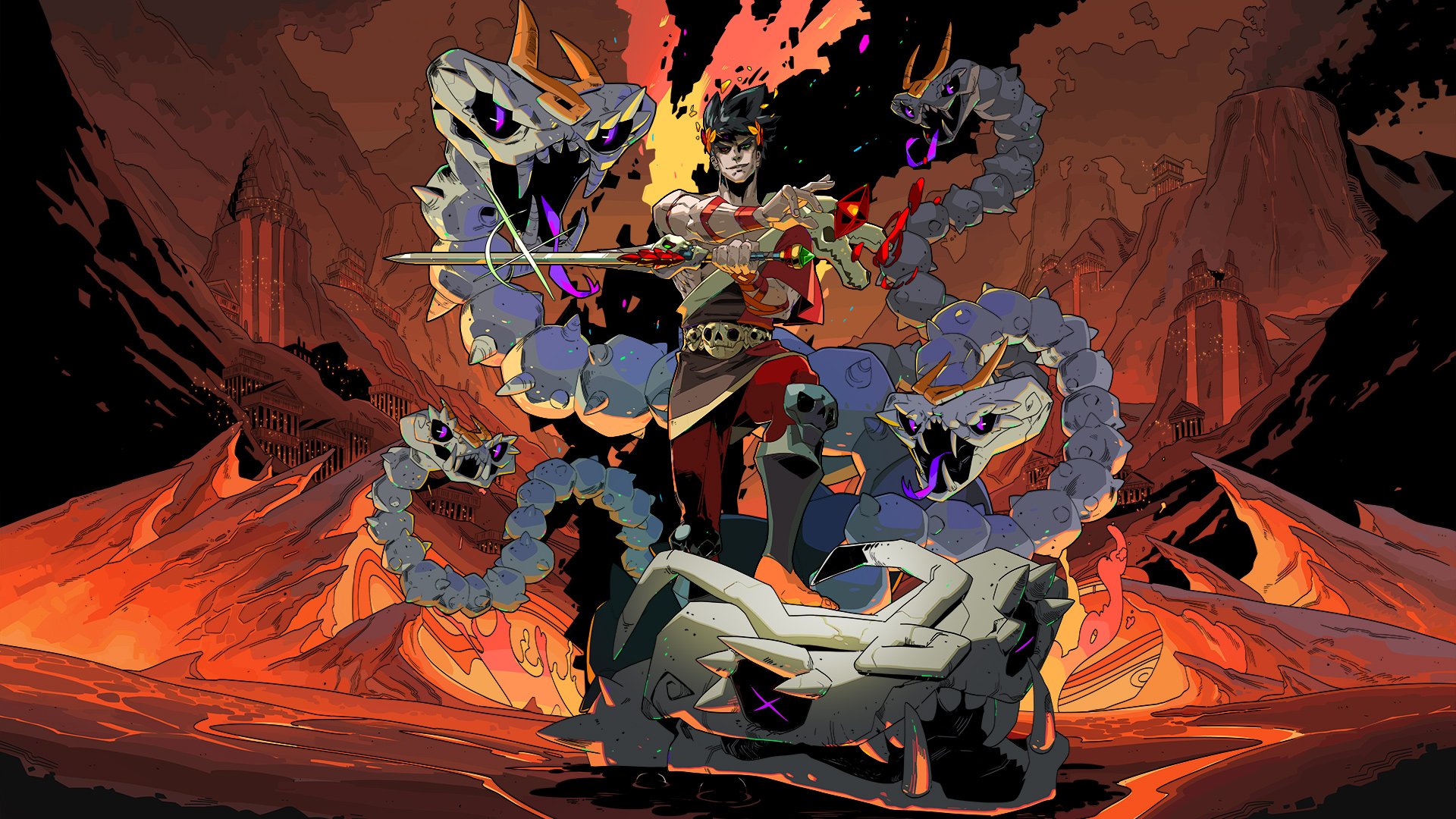 Thank you, sir, may I have another?

The buzz surrounding Hades is spot-on, and it only took one failed escape from hell for me to fall in love with its isometric hack-and-slash combat. It’s blisteringly fast but readable even when your screen is full of fiends. It’s easy to pick up but full of tough decisions. There are six weapons, all of which feel worthwhile, and countless god-given boons with which to improve and drastically alter them.

If you’ve been holding out for the 1.0 release of Hades because you try to avoid messing with Early Access on principle or you wanted to wait for a proper conclusion to the story, the time has come.

For all of 2020’s misery, I can’t believe how many incredible roguelikes this year has brought us.

I’ve put something like 20 hours into Hades‘ final release, and I have no regrets – which is good considering I’m bound to double that tally. I keep trying to get Hades “out of my system,” but it’s unshakable. This is the culmination of everything Supergiant Games has been working toward.

The secret sauce – aside from stellar action-RPG combat – is character-driven storytelling.

As Zagreus, the defiant son of Hades, you’ll make a mad dash through Tartarus, Asphodel, and Elysium with hopes of reaching Greece and gaining insight. Along the way – during runs and also back home at your “base” of sorts – you’ll converse with legendary mythological figures, all of whom are voiced and full of personality in thoughtful ways. Rather than tell a linear story, Hades is dished out through morsels of conversation that fit the context of a world in which death is an inevitable inconvenience.

It’s a perfectly-conceived setting for a roguelike, one that often feels alive by reacting to what you, the player, are up to – without coming across as artificial or “game-y.” These character interactions are wonderful. Supergiant’s carrot-on-a-stick story and repeatable game loop go hand in hand, and that takes the sting out of defeat. After mastering the default half-hour-or-so run, I feel motivated to keep playing, in large part, for more incremental story bits. At the same time, I’m still loving the flexible combat system and I’m pushing myself by toggling on some of the many endgame difficulty modifiers.

There’s a lot of minutia in the background initially, to the point where Hades‘ first few hours run the risk of overwhelming players who are (understandably) curious about permanent upgrades. Several meta currencies can be used to improve your odds of breaking out of the underworld, and if you fixate up front – if you’re too concerned with “winning” as early as possible – you’ll be doing yourself a disservice.

Win or lose, ultimately, you’ll be pulled back to the House of Hades. Zagreus is stuck in an endless loop, but life goes on. At home, you’ll run into bosses (even the Big Guy himself) that you potentially fought and slayed on your last run, with no hard feelings – chances are they’ll have something interesting to say about it. You might chat up Achilles, pet Cerberus, or train with Skelly, and be on your way again.

In other words, Hades rewards every attempt. The main narrative concerning Zagreus, Hades, and Persephone will start coming into focus as you continuously teach your old man a lesson, but the personal stories – including friendships and romances – can and will play out in spite of botched runs.

What if you don’t care to engage with that side of Hades outside of the bare minimum? The good news is that it’s still a ridiculously fun, well-balanced action-RPG experience, and you won’t be bogged down by dialogue. After 20 hours, I still enjoy beating up the most basic creeps. That says something.

There are three full biomes, the first two of which are an eternal pleasure to burn through and the third of which sometimes has slight pacing issues depending on your build and how equipped you are to handle waves of enemies that need to be killed twice to truly die. A fourth zone, the Temple of Styx, serves as a smaller choose-your-own-adventure “time to stock up for the final boss” buffer. It’s all right.

Within these biomes, you’ll fight monsters or chat with friendly faces on a room-by-room basis rather than explore a continuous stretch of land. In most cases, there are two choices – you can pick which room to enter next and you’ll plainly see what reward is going to be up for grabs (once you learn what each symbol means). Later, with an upgrade, you can even re-roll rewards if you don’t like the selection.

At first, I was expecting more of an exploration vibe from Hades – it’s almost non-existent – but I grew to appreciate the straight-to-the-action structure. That makes it a joy to replay and grind for upgrades.

Speaking of which, expect to die a lot until you’ve made permanent purchases with the Mirror of Night in your bedroom. These unlocks can give you benefits like an extra dash, more longevity – including, at most, three “extra lives” on each run – and also boost your odds of seeing higher-tier boons pop up.

Boons are frequently doled out as a reward for clearing rooms, and they’re your chance to hear a message from the gods of Olympus, each of whom has a gameplay-specific area of expertise. Athena can help you deflect projectiles back at their source, Zeus has lightning chains, and Chaos will offer a range of powerful perks in exchange for a harsh temporary debuff. Boons are used to create and modify your build on the fly for the duration of your current run; they’re my favorite part of Hades by far.

Each boon can branch off in a few different initial directions, and those directions can further mix and match and be upgraded as your run progresses. I can’t oversell how satisfying these abilities become. There’s rarely a clear-cut best choice – everything has potential, and I never quite know where my character build will take me. I can’t say the same for most other action-leaning roguelike games.

Going a step further, every weapon – from the Eternal Spear to the Adamant Rail (gun) to the Shield of Chaos – has hidden “aspects” that you can permanently unlock to specialize your playstyle. I’m obsessed with the Heart-Seeking Bow and its ability to “tag” a target with my main arrow and then fire off a spread of homing shots from a safe distance. I love powering that up with assists from uncle Zeus.

Zagreus also has a metered ability (based on the different gods) that you can charge up throughout battles and there are finite spell-like projectiles that you can “stick” in enemies, recover, and fire off again. Without breaking down every mechanic, let’s just say combat is fluid, dynamic, and full of life.

For those of us who adore a capital-g Grind, this one delivers. Supergiant gives ample opportunities to accumulate meta currencies during dungeon runs, and you can even trade them (to get precisely what you need) back home. I was able to easily prioritize and work toward the specific unlocks I wanted.

If anything bummed me out in Hades, I’d probably point to unevenness in the latter two zones, which sometimes feel like I’m going through the motions, and an arguable missed opportunity for a larger boss roster. Supergiant designed several genuinely memorable (and highly replayable) fights, but it leaned a bit too heavily on variants. They don’t all shake things up as much as I would’ve liked.

At the same time, those criticisms stand out to me mostly because everything else is so excellent. If you’ve enjoyed this studio’s other games, for what it’s worth, I’d call Hades the best of the bunch. And if you’re worried about hitting a brick wall and potentially missing the big-picture story moments, don’t be afraid to turn on the “God Mode” toggle for a guilt-free defensive boost to help you defeat dear dad.

Hades had the unenviable task of bridging a well-established action-roguelike format with impactful character-driven storytelling, and neither element feels like an afterthought. They lift each other to new heights. The finer details – all those little artistic touches that add up over time – really seal the deal.

It’s hard to imagine anyone other than Supergiant pulling off this Herculean feat with such style.