BASE jumping both terrifies and fascinates me to no end. As a general rule I don’t mind heights, I don’t get motion sickness, and I can play vertical-heavy games like Jumping Flash and AaAaAA!!! – A Reckless Disregard for Gravity all day long. It’s just the falling part that really freaks me out.

Naturally, I had to try out Skydive: Proximity Flight, and was pretty surprised with the results. 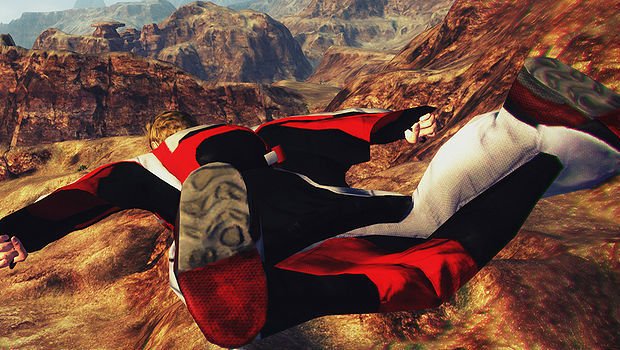 So, Skydive: Proximity Flight kind of came out of nowhere. In fact, I had no idea it existed and was randomly offered a review code for it, which I cautiously accepted. In the end though, I’m glad I took it, because it’s actually pretty fun — if you can get used to the idea of falling through the air over and over.

For a PSN game Skydive looks excellent, with a solid draw-distance range and beautiful locales like the snow-capped mountains of Switzerland, the Grand Canyon, Hạ Long Bay, and the vistas of Italy. My favorite is probably the Death Valley map, with tightly enclosed gorges straight out of a Star Wars film.

Control-wise Skydive is versatile, offering up the DualShock’s Sixaxis motion controls (remember that?), traditional analog stick control, or even the PS Move if you want. After trying out all three I opted for the traditional method, but the alternatives worked just fine once you get used to them.

Skydive is simple to pick up, as the X button engages tricks, the triggers queue up a speed-boosting shot of adrenaline, and the Square button opens your parachute to end a run. That’s it. Like A Reckless Disregard for Gravity, you’ll get extra points for being close to the ground, and otherwise acting like a crazy person. 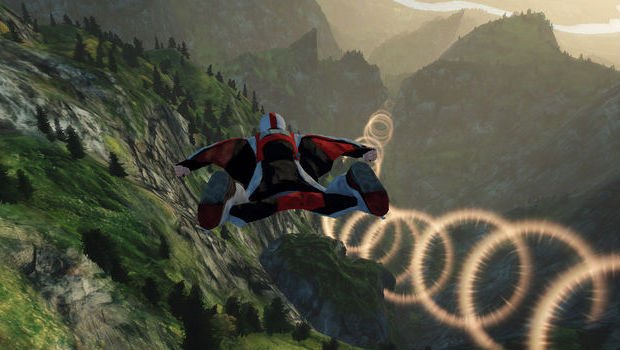 You can view the action from a first-person perspective, or opt for one of two leg cams, and a drawn-back third-person camera. The latter option is the most practical since you can literally see everything, but first-person flight can be really fun, and I can see the future Oculus Rift-supported PC version rocking this.

So what can you actually do while you’re flying around in your wingsuit? Well, there are 43 missions in which you attempt various objectives like flying into rings, diving certain distances, and busting out a certain amount of tricks. It’s nothing too out of the box, and although some of the levels tend to blend together, many of them will keep you on your toes, constantly improving your game.

Should you saturate everything there is to do in terms of missions, there are four races to compete in with AI opponents, which are actually quite challenging. One of my favorite mechanics of the races is the cool light trail that follows your opponents, so you can plainly see new routes to take and improve your skills.

There’s also a freestyle mode that lets you just fly freely in any level you wish, as well as leaderboard support and the ability to create challenges for your friends. I took me quite a while to get through everything, and even then I found myself messing around in freestyle mode from time to time, just exploring the landscapes and enjoying myself. 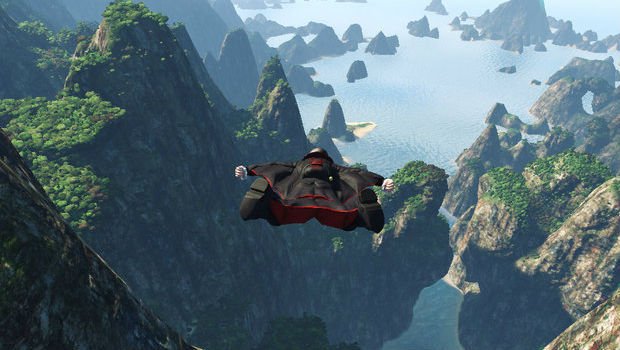 Despite all of this content, Skydive‘s main problem is that it starts to become stale unless you really like the concept of falling from the sky. There also isn’t a whole lot of creative design to help entice the general public — most of the extras are oriented towards BASE jumping fans, such as the inclusion of pros like Joakim Sommer. Skydive does have a few wacky characters like Dracula and “Squirrel Girl,” but that’s not nearly enough, and adding something unique like the abstract Mirror’s Edge DLC levels really would have done wonders for the appeal of the game.

Skydive: Proximity Flight is set to arrive at some point on the PC with Oculus Rift support, which would be really enticing. As it stands, your mileage will vary in terms of the console versions. Like a NASCAR driver that enjoys turning left, if you can see yourself soaring through the air over and over without getting bored in an hour, Skydive is your huckleberry.