When I first saw the debut trailer for Screamride, I assumed it was a simulator. Growing up with Sim Theme Park and RollerCoaster Tycoon, I relished the idea of creating and managing my own commercial park and divining new and innovative ways to thrill people.

That’s not what Screamride is. Instead, it’s more like a series of minigames based on three concepts — creation, destruction, and riding. You do that over and over, with mixed results.

In the end though, Frontier Developments’ formula is a therapeutic way to spend an afternoon, even with its faults. 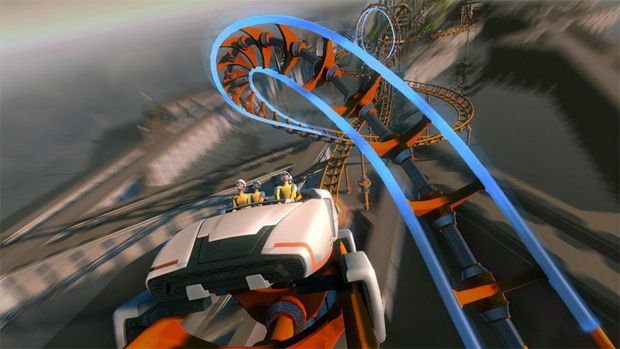 Believe it or not Screamride actually has some semblance of a story. In a dystopian future, a mega-corporation has recruited thrillseekers to test out various dangerous rides and experiences “for the future of mankind.” It’s all very eerie while at the same time adding in comical effects like people flying off the back of a boat to their death. It’s never laugh-out-loud hilarious but it strikes a nice balance tonally to the point where I’m typically smiling.

The thing I like most about Screamride is the commitment to the theme. Whether it’s the chill electronic soundtrack or the bright and beautiful skylines, I’m constantly in a state of therapeutic bliss. The actual game on the other hand is very simplistic — often to a fault.

Everything is broken up into three core concepts, strung across six different zones. You’ll get the “Ride,” “Demolition,” and “Engineer” subtypes, with roughly three to four stages for each activity. A certain score is required to progress through the campaign, which should take you roughly 10 hours or so to complete.

“Ride” is probably the least exciting of the bunch, as it’s basically Kinect Sports without the Kinect. Some of you out there might be jumping for joy at the lack of motion controls, but a fair bit of Kinect Sports Rivals was actually well done and innovative. With this minigame, you’re just controlling a coaster, literally on rails, to its destination. Your job is to boost every so often and not fall off.

“Demolition” is easily my favorite, and the one I play most often. In short, it’s a ‘roided up Angry Birds, subbing in orbs with people in them as the “bullets,” so to speak. You’ll control a catapult as you aim and fire each shell into various buildings and targets, with a slight aftertouch control to ease you into your destination. On the Xbox One, the physics are beautiful, and the destruction is gloriously detailed.

You’ll also get quite a bit of variety here as the game ramps up and gives you more powers, like the ejection pod or the jet-propulsion pod. To hinder or help your chaos there’s a bunch of bounce pads, explosive barrels, wall-blocks, and basketball hoops to navigate through, adding a lot more depth over time. What feels like a basic Angry Birds clone eventually turns into something much more than meets the eye. 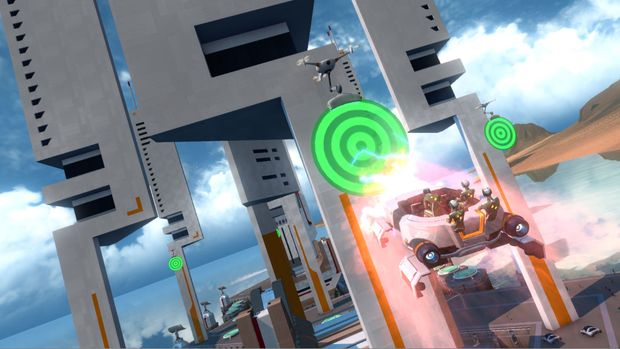 “Engineer” is the last bit, which is basically more of a tutorial for the sandbox mode. You’ll get to create the coasters that you got to play with in “Ride,” adding in your own twists like bigger drops, tighter corners, and higher hills. The only real selling point here is challenges, which aren’t present in the sandbox mode. Sandbox will be the bigger draw for creative types, as there are a lot more tools at your disposal.

If you’re so inclined you can also add in objectives for other players and share them online. There’s already some crazy developer creations that were more fun to ride around in than the campaign, so as if the community stays active, there will be extra content to play around in down the line. That’s a big “if” though. The main problem with Screamride is that the creation process doesn’t feel as grand as it could.

I was hoping that I’d be able to jump in and craft a giant universe of rides, but instead the game only gave me smaller islands to work with. Creating your own coaster with hundred-foot-high hills can be thrilling, but it can only go so far until you want to move onto something else. In a future sequel, I’d love to see ten or more concepts, not three, all working in tandem. 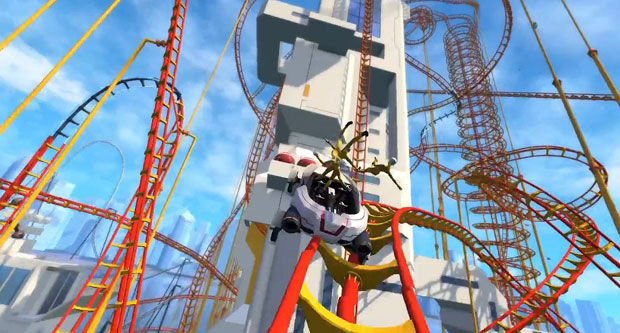 Screamride is a limited romp, but its core selection of minigames are fun to play. It’s enjoyable for what it is, whether you have a creative mind or just want to blow shit up. I can see myself going back from time to time to top my best score — I just won’t be creating things for months on end.