Raise your hand if you still hold water for Battletoads outside of that GameStop meme. I see…a few people in the horizon!

Wait, am I one of the only ones who played all seven games in the series, including the Tiger Electronics handheld release? Who is this 2020 version of Battletoads for? After playing it, I’m even more confused and delighted. 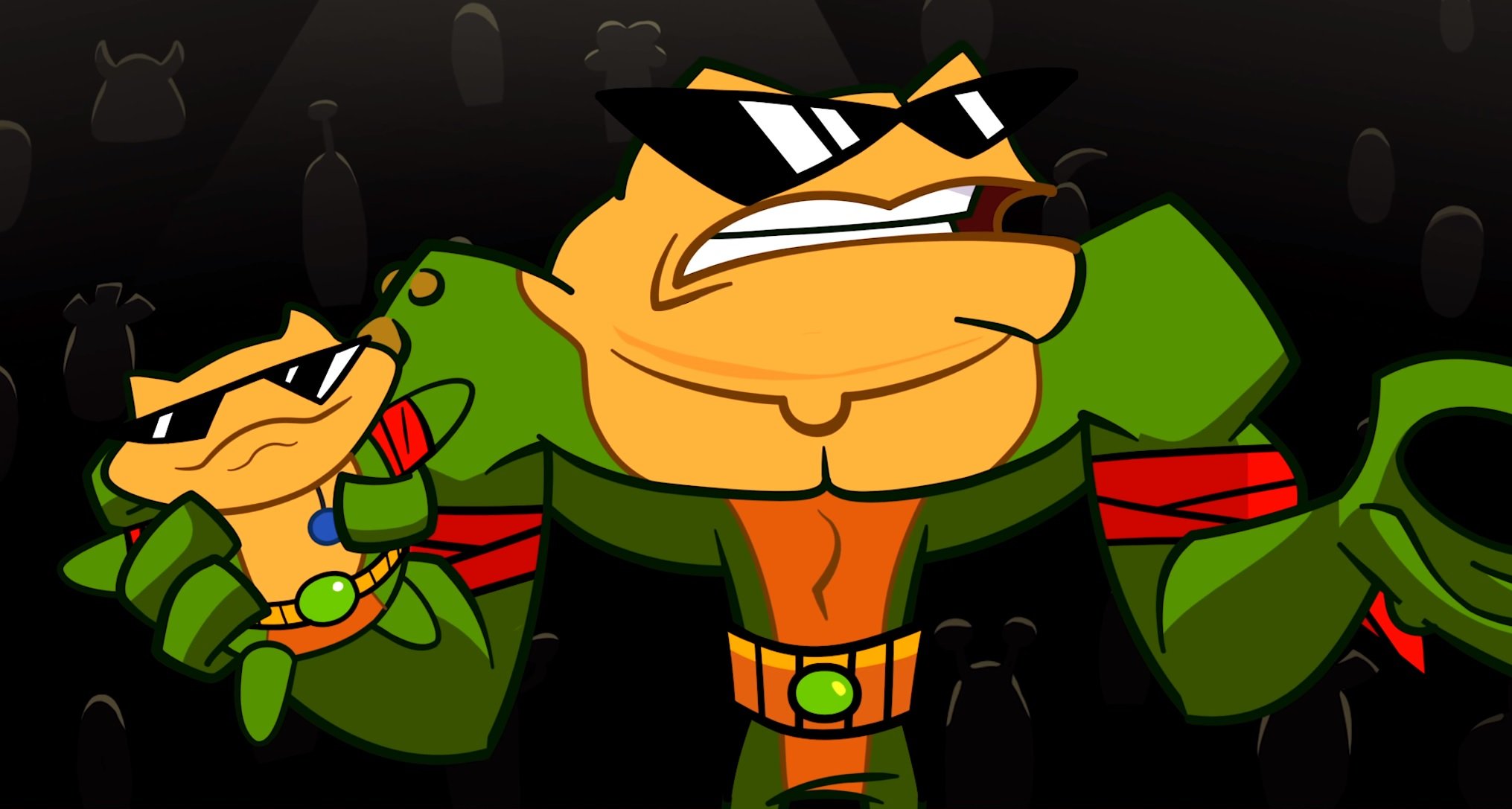 Battletoads is one of the most bizarre games I’ve played this year — possibly this generation. It’s an absolute roller-coaster in more ways than one.

Did you expect it to be a beat ’em up? Because it’s not just a beat ’em up. It’s part Mario Party, part shoot ’em up, part…Keep Talking and Nobody Explodes for a level? Yeah, it gets weird, and I respect the hell out of it for trying something different.

In order to make the toads relevant again, our heroes Pimple, Zitz, and Rash are shoved into the modern era (of a galactic sort) 26 years after they saved the galaxy from the Dark Queen. They’re washed up, and the story isn’t afraid to poke fun at the fact that they started out as bonafide stars but eventually became a failed attempt to capitalize on the Teenage Mutant Ninja Turtle craze.

I was really worried at first when the game leaned heavily on cringe humor, but there’s a small narrative reason for that early on and it eases up a bit from there. Onward, it morphs into a combination of a ’90s cartoons (with beats of the DuckTales reboot) alongside of self-referential and occasionally macabre absurdity not unlike Rick and Morty. Nearly the entire game is fully voiced (with feeling!), and the cutscenes are plentiful and silly fun: almost like a limited-run TV series. It’s part of the charm, as the development team nailed the premise of old hat “rad dudes” trying to adjust to a new world that left them behind.

While the cartoons are a big part of the package, it is part-brawler though, with a character select screen available at the start. You’ll pick one of three titular toads: Pimple (the slow bulky one), Zitz (the quick one), and Rash (the balanced one). The standard attack button serves as a dial-a-combo, but you’ll also sport a launcher (that hits enemies upward), a special attack button (that works a lot like Dynasty Warriors‘ special system in tandem with the standard attack), and a stun.

Eventually you’ll learn the ways of the toad tongue, which lets you stun enemies with gum projectiles, lick enemies closer, shoot elements of the environment, and grab onto foreground and background rings to zip around the arena. It’s not the deepest brawler in recent memory, but it gets the job done. The dash is extremely elegant and smooth, especially on the hyper-fast Zitz, who basically teleports when he dashes.

Slowly but surely I started to pick up the combat system, which is predicated on prioritizing high-impact enemies while darting around the small fries and errant projectiles. With support for up to three players, everyone can control their own toad; but you can also “tag-team” in the characters you aren’t currently controlling in two-player or solo play. If any single toad dies you have a chance to revive them amid the chaos, lest they be subject to a cooldown timer.

But as I hinted at earlier, it’s not just a brawler. I even counted: 18 out of 25 chapters are actually minigames, vehicle sections or interactive cutscenes. One entire act is basically a collective of puzzle-platforming stages (Celeste style) and shmup gauntlets. The Speeder Bike sections also return and can get pretty tough as the campaign progresses, requiring fast reaction times close to the original game, but with more forgiving checkpoints. The same goes for the 2D vehicle sections that take a page out of the chase sequences from Rayman Origins/Legends. 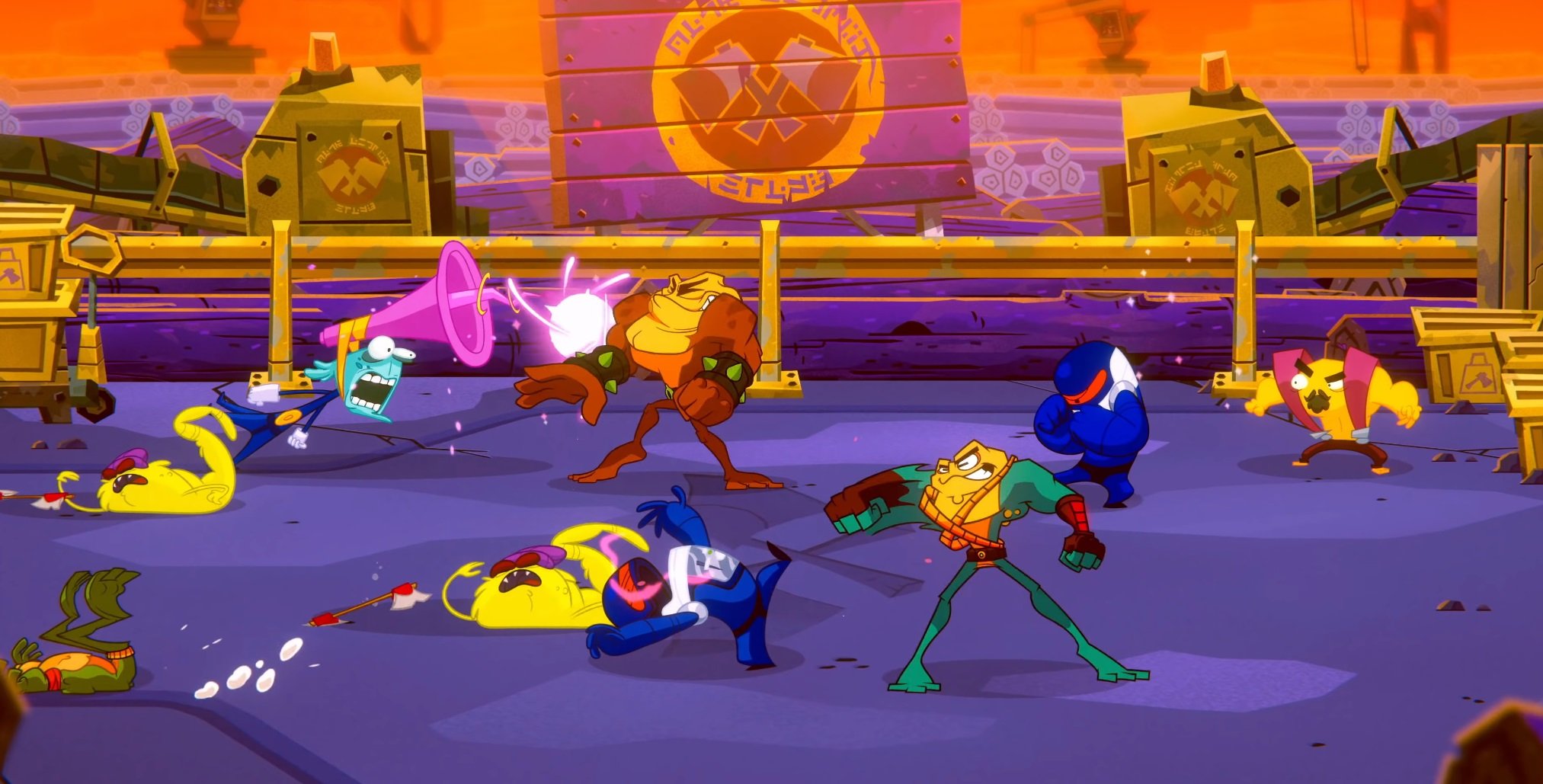 Didn’t I tell you that Battletoads was kind of all over the place? Not all of those diversions are given an equal amount of love and care.

At one point I had just come off of a minigame that was basically Pose Mii from Wii Play, as I transitioned into more minigames. This is fresh off of a fever dream of playing multiple rounds of an in-game version of rock paper scissors. You might find yourself thinking “What the hell am I even doing?” multiple times throughout the course of Battletoads. I even said it out loud when the aforementioned Keep Talking and Nobody Explodes bit popped up and my co-op partner had the strangest look on their face. It’s best to just roll with it.

All of this madness takes place across four acts, which last around four and a half hours in total. You can play it again on one of three difficulties (with options to make this tougher like turning off enemy attack tells) or try and grab every collectible when you’re done. There is no online play available for Battletoads: just local support for up to three people.

Battletoads is another one of 2020’s infamous oddities. I suspect it’s going to be highly polarizing (not only due to the adherence to retro style difficulty but the newness of the art and humor), but it somewhat won me over due to sheer force of will. I also can safely assume that I’m going to be on the higher-end of the spectrum of liking it: but if we never see these dudes again because this game was an absolute cacophony, I’ll be a bit bummed.