If you include its alpha period, Minecraft turns 10 years old this year.

I know! For some that’s a long time; but for others, it feels like it’s always been there. For years the folks at Mojang have been slowly building on the original concept, boosted by C418’s beautiful score and the promise of limitless creation. After Microsoft took control of the property, Minecraft only expanded from there on new platforms, with cross-play uniting people all across the globe.

Now that everything is beyond stable, it finally feels like it’s the right time for a spinoff.

Minecraft Dungeons is a little more straightforward than Minecraft proper. Kicking off with an epic (and I mean that in the literal romantic sense) intro in the signature blocky style, the framework of having to stop the misunderstood-but-ultimately-tyrannical Arch Illager is easy to grasp but still very Minecraft.

The mechanical premise is just as painless. Dungeons is a dungeon-crawling action-RPG (ARPG) in the style of Diablo, but with simplistic control and design philosophies that a lot of ARPGs could learn from. For instance, your health potion is on a cooldown: there’s no need to annoyingly micro-manage them. Food is eaten automatically and provides limited-time buffs. Your dodge is linked to RB (R1) or the right analog stick, where you can roll in any direction (on a cooldown to prevent spamming) like God of War, which also serves as a way to “leap” across gaps.

Beyond managing your skills, a standard melee slash, and arrow shots, you’re good. While hardcore inventory-puzzle-solvers might long for more, it’s a great compromise that helps keep you in the game and out of menus. Of course there are menus, but they’re streamlined and meant for a small amount of customization for your melee/ranged weapons, suit of armor (one slot), and three optional relics.

Minecraft Dungeons also eases in roguelite tendencies in a non-annoying way. Upgrades (called “enchantments”) are random rolls for each item, akin to something out of Rogue Legacy. They encourage players to re-roll characters and try out new builds, or enchant brand new items to see what they get (and salvage them for parts or more enhancement points if they are dissatisfied). Dungeons themselves are also randomized (with a method to their madness — sometimes too methodical) to promote replayability.

Part of that replay factor, mind, is predicated on the wacky powers that enhancements grant. Abilities can cleverly chain, like equipping firework arrows then imbuing your bow with the “multi-arrow” enchantment for a spread of explosive projectiles. You also might build your character a certain way, like attaching a piece of armor that fires out an occasional stunning blast with the fishing rod (one of several callbacks to classic Minecraft items) to chain stun and focus on controlling elite enemies.

Even though there might not be as many raw abilities compared to other ARPGs, the combinations remind me fondly of the Ultimate Alliance/X-Men Legends series. Some enemies can get stunlocked or stomped too easily if you go too far, but given that the developers have openly said they’re okay with overpowered builds, you just have to choose not to use them if you’re uncomfortable with it. There’s more drawbacks to that laissez faire approach, like wonky auto-aiming for ranged attacks and frequently unhelpful map navigation. But the mentality works as a whole and those shortcomings are easy enough to compensate for. 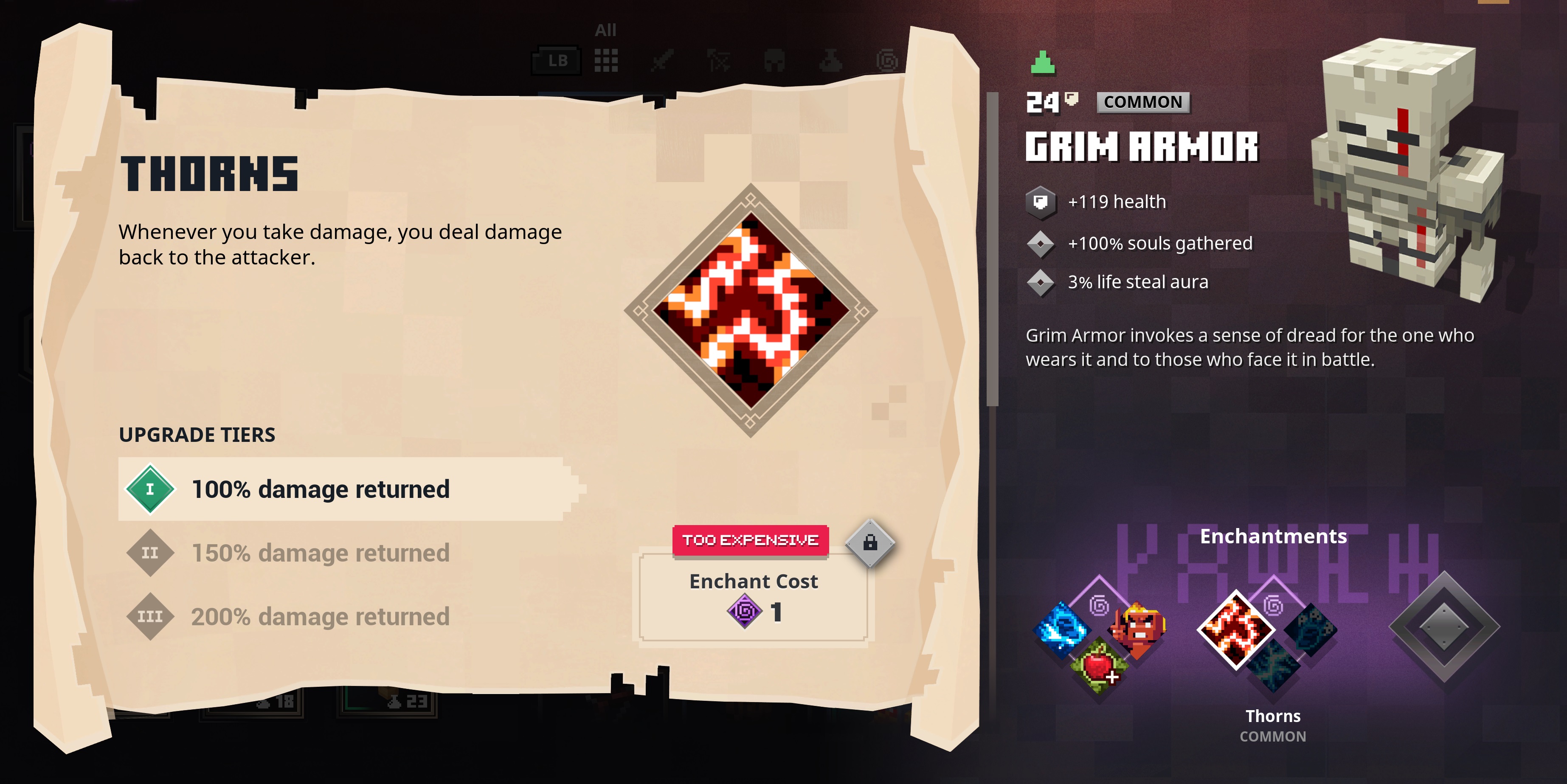 If you’re not content with solo play, you can go in with four friends locally or online (without mixing the two, and cross-play is coming later). Extra difficulties (Adventure, then Apocalypse) are unlocked sequentially after beating the game (a process that you can do the first time in an evening), which offer tougher enemies and better rewards. You can jack up the difficulty of individual missions on a sliding scale for improved rewards. The entire game is scaled, actually, and even postgame settings are all on the same shared world map (like Nioh). You don’t even need to beat every level to reach the final boss.

Although there’s a lack of building mechanics, Dungeons is true to the Minecraft aesthetic. The world looks the part, and the camera is positioned just right to allow players to focus on the environments and character models while providing a bird’s eye lay of the land. The unique bits of Dungeons also shine through on their own merits: if you don’t laugh when the anthropomorphic keys (who have little legs!) try to wiggle free, you don’t have a heart.

There is a certain fatigue involved with playing Dungeons for extended periods. The world and its environments are compelling, but by virtue of making every character baseline the same, there’s no real connection to the story. That story, mind, is very brief and mostly lore table setting for each zone, with layouts that can feel very guided at times. There also aren’t enough unique minibosses to encourage experimental postgame runs, and having DLC “coming soon” on the world map rubs me the wrong way, even if the base game feels complete and is budget-priced, and the DLC is included in the 10-dollars-more hero edition. 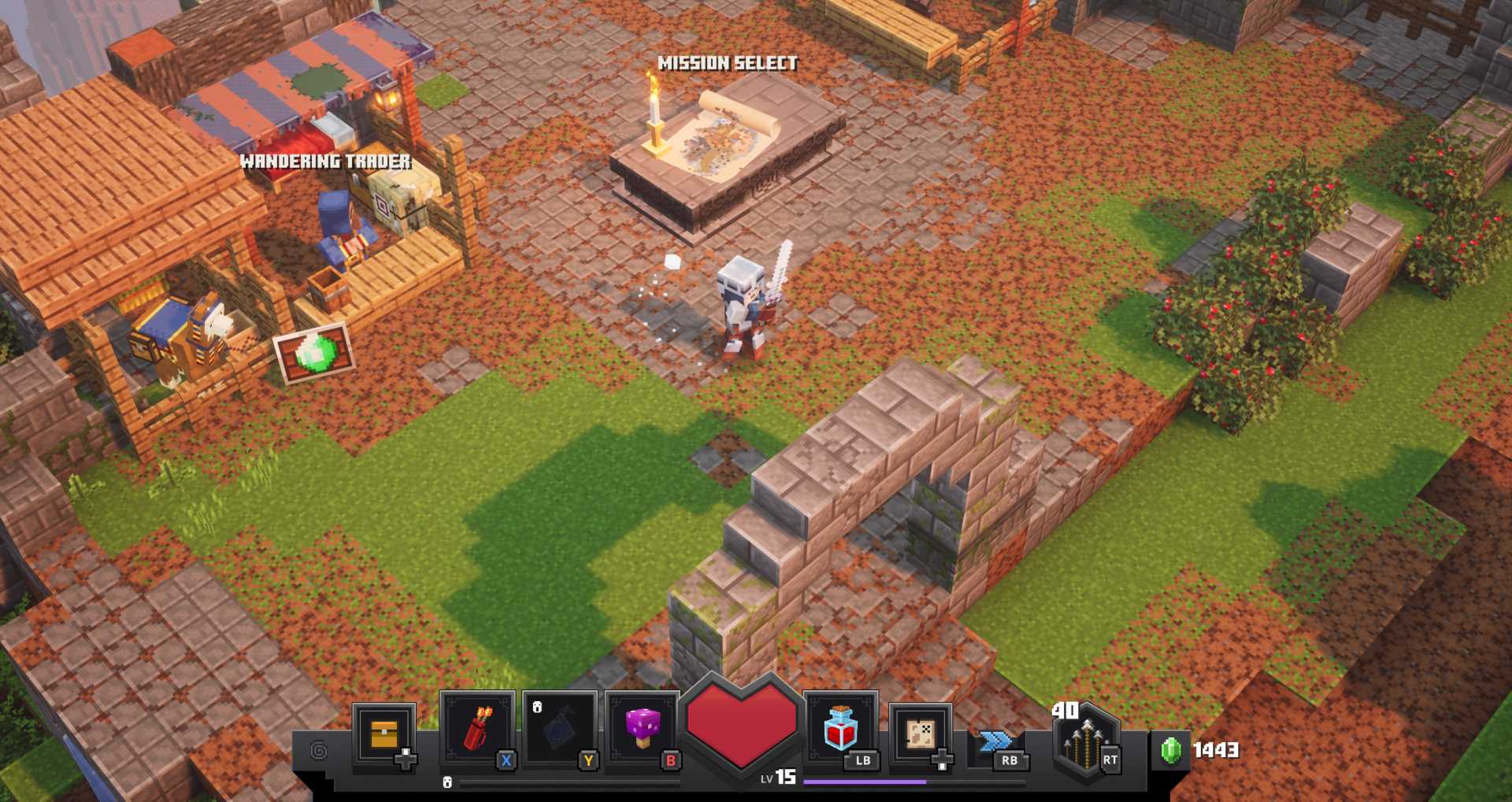 Although Minecraft Dungeons might not have the depth that a lot of hardcore dungeon crawler fans are looking for, it’s an easy game to pick up and play at pretty much any point: solo or otherwise. Minecraft has proven itself to be quite the enduring and endearing IP over the past decade, and Dungeons is now partially responsible for that legacy.