You know how in “The Cartridge Family” (season 9, episode 5 of The Simpsons), Moe shows off how “with a few minor adjustments” he turns five guns into one gun? 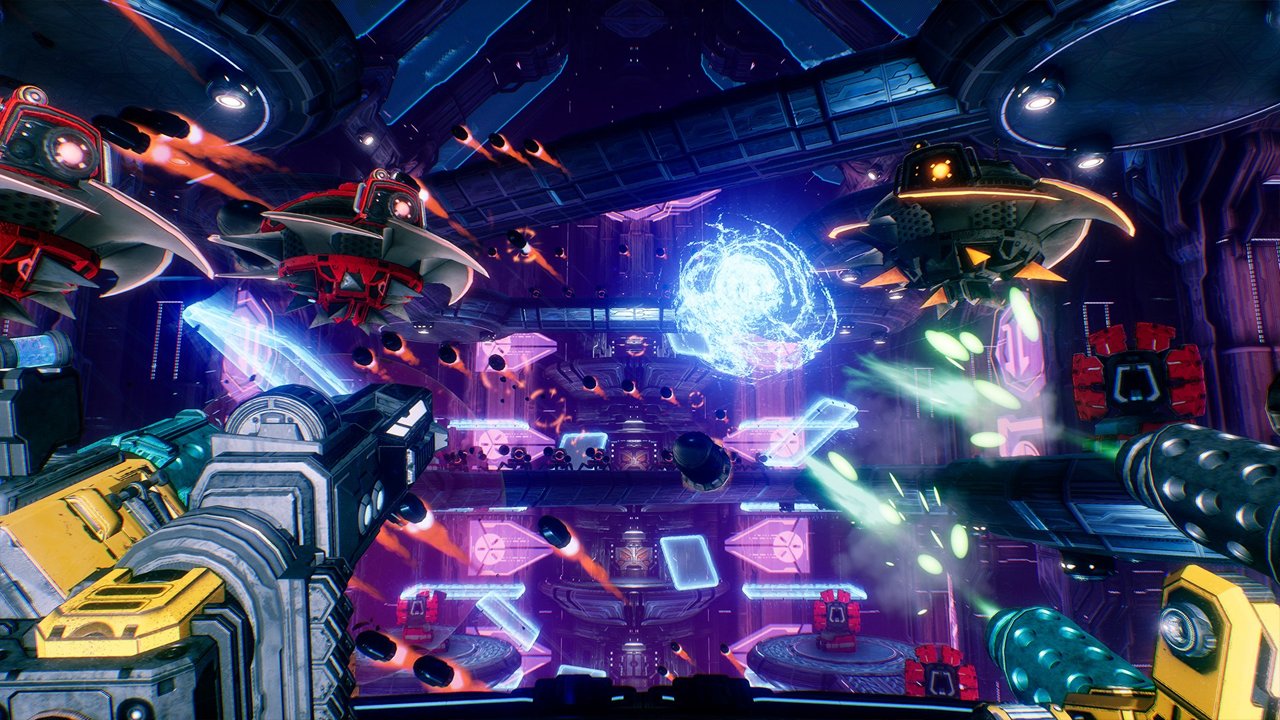 Mothergunship is a first-person shooter roguelike that allows the player to create crazy combinations of guns to take out room after room of deadly robots aboard alien spaceships. For anyone who has played the studio’s last title, Tower of Guns, this is very much a pseudo-sequel. It feels the same as its predecessor, yet builds on top of it to create a different enough project to justify its existence. If you have not played Tower of Guns, what the heck, man?

The player has a right and left arm to equip with whatever weapons they acquire over a specific run through an enemy ship. Depending on the mission, players can bring with them a set of items to start with; otherwise, they’re left to just their punchy fists (which are awesome). Certain mission types will give the player a set of items to use, though it is possible to ignore them and simply use the punchy fists (seriously, they’re awesome).

Items are broken into three categories: connectors, barrels, and caps. Connectors are the pieces that guns attach to and allow players to put many different guns on the same arm. Barrels are the guns, which come in various sizes and shoot in all sorts of different ways. Caps are small attachments that act as modifiers; some will make shots ricochet, others might increase damage and/or the shot pushback.

Combining everything into a mangled mess of a gun is where the excitement comes into play. Throughout each run, enemies will drop coins that can be used in the shop. The shop will randomly show up in rooms and is only accessible once the room is cleared of enemies. Items have different levels of rarities, and depending on the rarity and impact of an item, the cost varies. Guns can also only be added/edited at the beginning of the level or in one of these shops.

In general, there are two to four opportunities to utilize the shop, and there’s plenty of opportunities to have a modified gun on both arms. The levels tend to be just short enough to prevent any sort of crazy gun combination from being concocted, which is a huge shame. In fact, I lost track of how many times I created interesting gun combinations only for the level to be over. I’d be collecting coins and anticipating the next shop, only to have it be in the very last room. Since it only unlocks when all enemies are dead, it was a moot point.

The guns and parts collected in a run are added to a permanent bank that can be brought into missions in the future, but there is a cap of 100 total items total. I understand the need for this, but it becomes incredibly frustrating once that cap is hit. After a mission, if the bank is exceeded, the player goes through the entire list of items and selects however many they need to get back to 100. This is an awful process that feels archaic and clunky. 85% of the screen isn’t used and the player is forced to scroll through a list of items that shows maybe seven at a time. Most of the time, I just wanted to select the items I picked up on the previous run, but they were already all lumped in together. Again, I understand the need for this cap, but maintaining it must be streamlined. 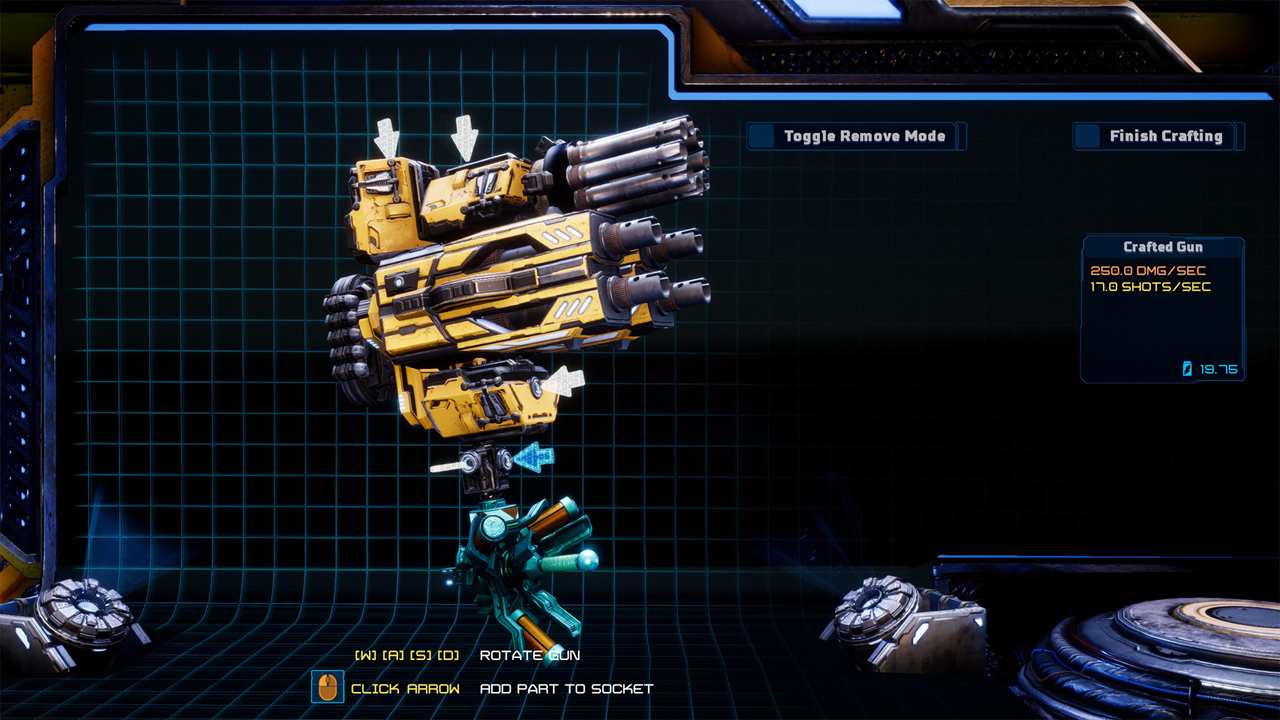 Rooms are randomly selected, as are the enemies within. So while you may encounter the same room many times, the enemies may be different. It seems as if there are certain combinations of enemies per room, as I have seen the same exact room more than once, including the enemies and their placements. This does tend to result in the non-story missions feeling nearly identical at times, as the aesthetic never changes. These missions also don’t have boss fights, so the mission just ends after stepping on a self-destruct button. Even the story missions have only a few bosses in total, which is a major disappointment.

Regarding the story missions — they’re quite wonderful. The aesthetic is different and pleasing, and while the enemies don’t vary much from side mission, the room size (often very large) and strategies necessary are unique. These missions are often on the difficult side of things too, so the idea is to play the side missions to gather items and utilize the best ones in the story missions. Most story mission rooms are also randomly chosen (from a different set of rooms), though some are always the same. Since dying in a mission results in a loss of the guns and parts taken with you, I would generally enter a story mission with nothing (just my super awesome punchy fists) and see how far I could get. By the end of that usually-failed run, I would know what items were best to bring in to help guarantee success.

The plot itself is told by a cast of characters over a communications line and is easily one of the most memorable parts of Mothergunship. The voice acting and writing are hysterical, and I loved every minute of it. Hell, there’s even an interesting twist at the end that completely caught me off guard! The lines of dialogue are given when in the main headquarters or while in the waiting chamber in between rooms. For such a fast-paced game, it was a joy to kick back and listen to the crew every so often and crack a smile. 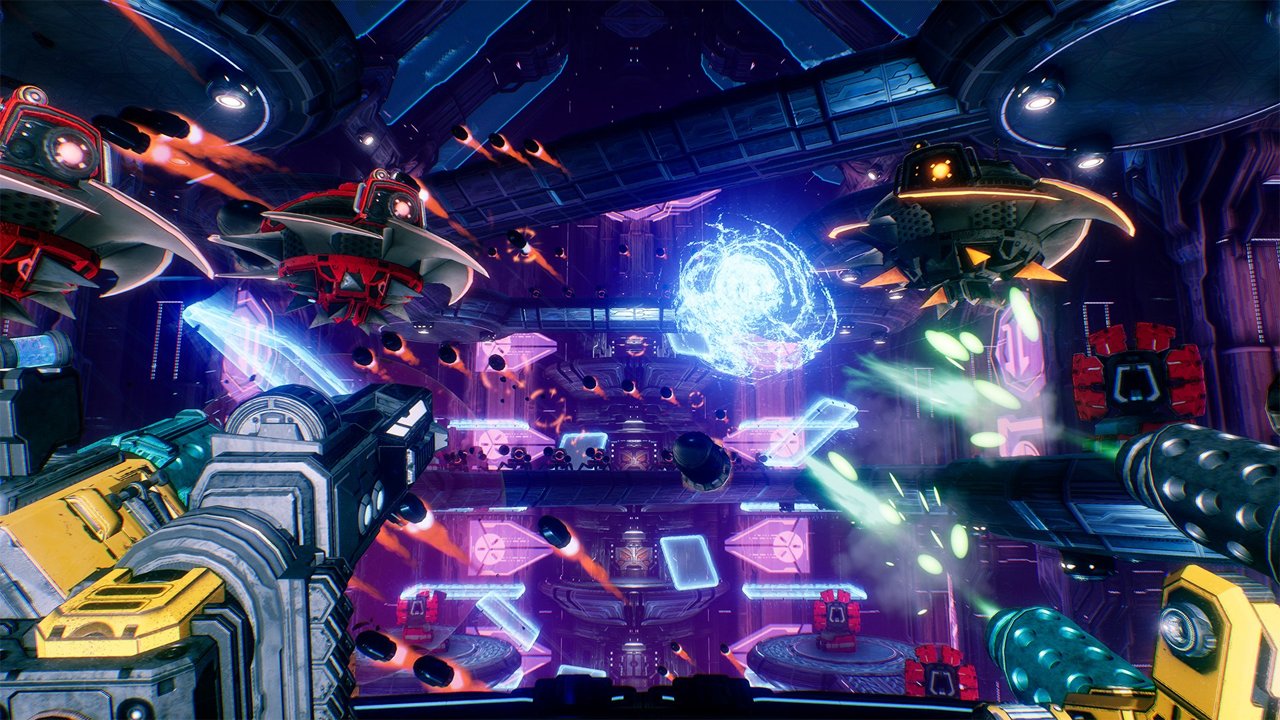 Oh and believe me, this game is fast. Fans of ’90s first-person shooters like Quake and Unreal Tournament will feel right at home with Mothergunship. Upgrades are available for the mech suit the player pilots, and among the upgrades are increased number of jumps and increased movement speed and hooo boy can that thing go fast and jump a lot. Additional jumps can also be gained mid-run, and, well, let’s just say that I’ve gotten the achievement for getting 40 jumps at once. There’s a whole lot of jumping and circle-strafing to be done here, so prepare those WASD fingers.

The game doesn’t quite end when all of the story missions are over. Other than the endless mode (which is where the gun combos can really get crazy), there’s an endgame that allows the player to keep going, leveling up and facing harder and harder ships. There are also a slew of planned updates, including more guns and two-player co-op, but what is present at launch feels like a solid foundation. There are some odd and annoying design decisions, and it can feel frustrating to rarely get to really let loose with the gun creations, but damn if I don’t keep coming back to go through a few ships and see what destruction I can cause.