Punch, punch, it’s all in the mind

I’ve played a lot of endless runners in my day — and by “my day,” I mean ever since I’ve seen the iOS and mobile market get flooded with them for the past three years.

There’s only so many times you can watch a dude run from one end of the screen to the other on an infinite loop before you shut it down and play something else.

But not every “endless” title is created equal. Games like RocketCat’s own Hook Champ and Ubisoft’s Rayman Jungle Run broke the mold with charming graphics and an actual established leveling order, while Jetpack Joyride owned the scene with its unique take on quests.

Punch Quest isn’t as good as Hook Champ, Jungle Run, or Jetpack Joyride, but it’s still worth piling into the “endless runner” folder on your device. 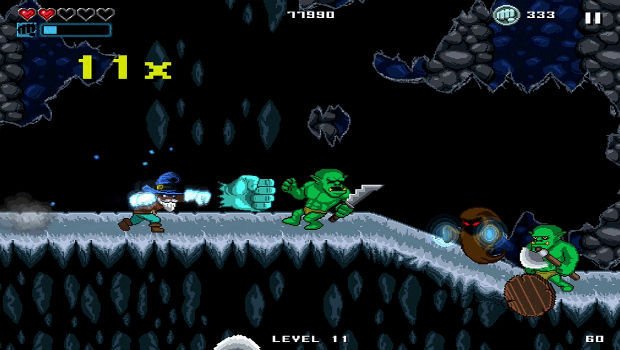 Punch Quest differentiates itself from the competition right off the bat, as it’s a tad over the top. For starters, there are giant eggs that cause you to explode, then transform into dinosaurs or gnomes. There’s special food where, if you eat it, you start seeing gnomes and embark upon a special bonus area.

But despite the wackiness, the game is actually very simple to pick up.The left side of the screen triggers a vertical uppercut punch attack, and the right side functions as a forward/horizontal straight punch. There are a few advanced moves you can do, such as pressing both of them (or swiping) to block attacks, or uppercutting first, then forward punching to get extra air and clear some gaps. While there isn’t a whole lot of depth here, the control scheme is easy to use, and gets the job done.

Another cool thing that sets Punch Quest is the fact that you’re going to do a minimal amount of jumping. Although there are spike pits and some platforming segments, for the most part, the game is combat-centric and not hung up so much on traversing pitfalls. Also, the addition of blocking is a great mechanic that’s often not found in these types of games, as it adds a small layer of strategy and split-second timing to your journey.

Just like a number of other contemporary runners, there are three “quests” to complete during each run — such as “block three attacks,” or “uppercut 20 enemies.” The game also has bosses, which is a rarity in the runner genre. 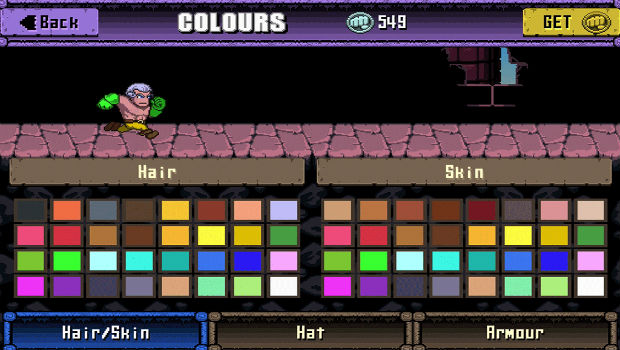 Aesthetically, Punch Quest is a good mix of old school retro and RocketCat’s signature art style, which comes together nicely. My favorite part is probably the strong focus on customization. If you want to be an African American Punch Wizard, go ahead!

If you want to be a heavily armored Phalanx-style Punchette, you can do that too. Personally though, I was fine with the original base character. In terms of other visual options, RocketCat promises iPhone 5 optimization, mainly the addition of more screen real estate — but since I only had an iPhone 4 on hand for this review, I wasn’t able to test said optimizations.

I was longing for real quests with an actual conclusion. It would have been nice to have an option to play a mode with a payoff at the end — that’s the kind of mechanic that keeps people playing for hours, and something other games in the genre have handled brilliantly. 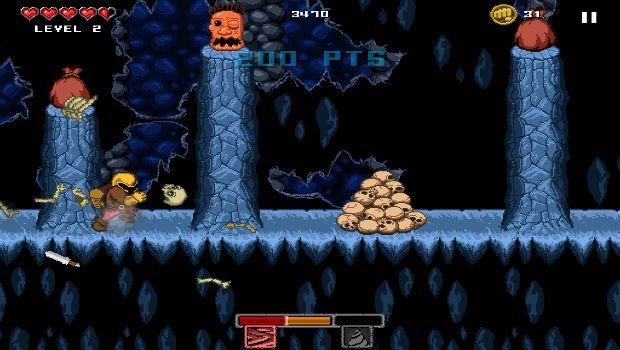 Provided that you’re willing to see a number of the same screens over and over, longevity shouldn’t be an issue, so long as you have the fortitude to work through the hundreds of potential in-game currency options. Once you’ve exhausted your Power I, Power II, Super Move, passive upgrade and hat options, you can move onto boosts, which temporarily increase your abilities for one run — essentially elongating your experience to an infinite amount of playtime.

Given that the app is free, in-app coin purchases are included, should you choose to pay real cash for upgrades, but just know that I never once felt like I hit a paywall. While it may feel like some upgrades are a bit grind worthy, the game doesn’t feel like it’s withholding content, because the bulk of your expensive purchases are going to be solely for aesthetic value (hats, faces).

At the end of the day, I wasn’t enamored by Punch Quest, but I enjoyed my time with it, and it has enough content to keep you going for a while. If you like endless runners and punching things, odds are you’ll enjoy RocketCat’s latest effort. If not, I doubt it’ll make any convincing arguments to convert you.