Soaring above the rest

Welp, it was worth the (eight-year) wait! 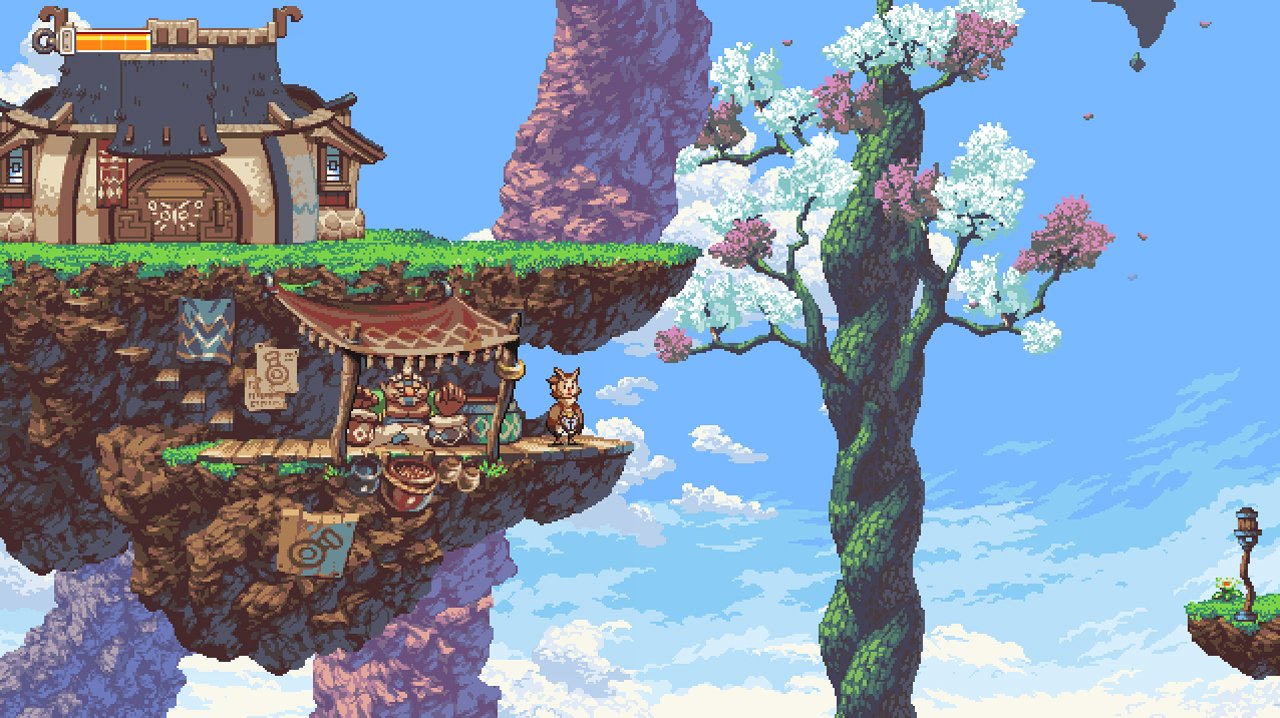 One of Owlboy‘s many strengths is its ability to get the player invested in the plot and its characters immediately. It all starts with Otus, a young, mute owl, who begins his adventure in a very relatable experience to most people: a negative student-teacher relationship. Players will be rooting for Otus’ success immediately because of his situation and just how expressive he is.

Speaking of expressiveness, holy cow does this game nail character animations. If there were no dialogue at all, it would still be easy to determine the personalities of every single character. Otus will twiddle his fingers, his companion Geddy will wave his arms about, characters have detailed facial expressions while talking or reacting — everything about the animations is special. It doesn’t matter if the character is the main focus of the scene or not, which is really what makes it all so brilliant.

Okay, back to Otus’ story. The opening scene deserves special, yet vague, mention. The relatable relationship should hit home for many people, but the way the gravity of the situation and its impact are conveyed is nothing short of amazing. In fact, I would say that the only scene in Owlboy better than its opening is its ending scene, though I won’t go into detail for obvious reasons.

This is a game that explores a lot of themes throughout its roughly eight- to ten-hour journey. The strongest is that of friendship and at times it really pulls at the heartstrings. I wasn’t expecting this much of an emotional rollercoaster, but damn does D-Pad Studio know how to play with emotions. This goes a long way towards getting the player invested in what is actually happening on a more personal level. I don’t want to go get the bad guy because that’s obviously what happens next, I want to get him because HOLY SHIT DID YOU SEE WHAT HE DID?!

The overarching story follows the Owls and explores their past, present, and future. It’s easy to comprehend and doesn’t throw out an insane amount of jargon at the player that serves only to make things more confusing. The Owl homeland gets besieged by pirates and Otus and friends set out to put a stop to their dastardly deeds.

Even the gameplay feels fresh and exciting. Otus is equipped with only a spin move and relies on others to do damage for him. The first companion is Geddy, who wields a pistol. While carrying Geddy, the player can’t use Otus’ spin move but can utilize Geddy’s pistol to shoot enemies. It’s possible to teleport Geddy (and others) directly into Otus’ hand with a tap of a button, so there’s no “Oh shit, where did I leave him?” moment.

As the story progresses, Otus connects with two more NPCs, each with their own abilities. This isn’t a spoiler, by the way, because the menu screen blatantly gives this away as soon as you look at it. There are also instances during the plot where Otus carries temporary friends who also have unique abilities. While the base mechanics are simple, I loved the open-ended opportunities. 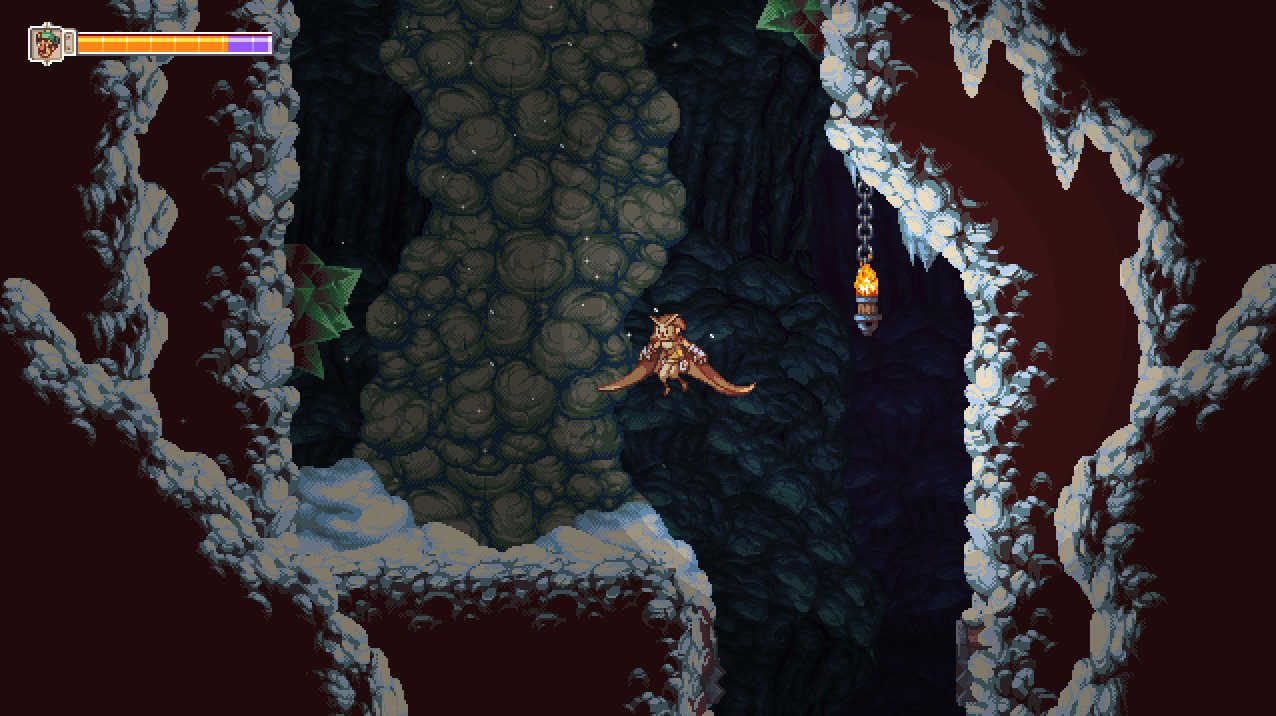 Every time I saw an NPC, I found myself thinking “What if I teamed up with them? What abilities might they have?” It reminded me of playing Shining Force, when you never knew who exactly would join you and what they could do. It immediately made me interested in each new character that was introduced.

It feels remarkably satisfying to utilize multiple characters and Otus all at once. To use an early example with just Otus and Geddy, I’ll use the armor-covered cyclops-bat enemies. Normally, the player can just fire a few pistol shots and kill the bats no problem. However, since these guys are armored, I would throw Geddy up in the air, spin as Otus to knock off the armor, then either catch Geddy (for extra flair) or teleport him to me before he hit the ground and fire off a few shots. It’s not an overly dexterous feat, but god damn does it feel badass.

All of this is exemplified in the boss fights. Each encounter feels intense and unique, usually forcing the player to utilize a recently-learned technique. In fact, if you’re having a hard time, just pause and think about what maneuver you’ve been using for the past 20 minutes or so! Now, this isn’t a case of getting the fire rod and then obviously using the fire rod on the ice guy (though there is some of that). Everything is integrated together to feel amazingly cohesive. 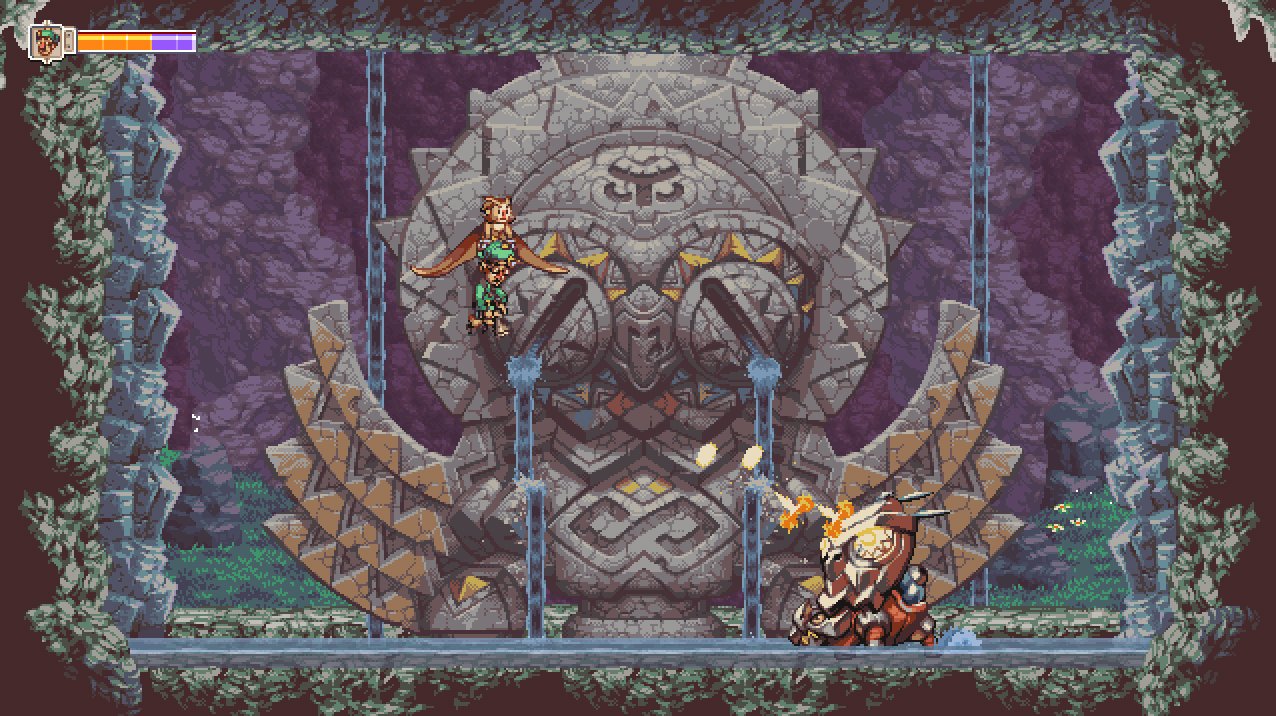 Outside of combat, there are puzzles to solve in most of the game’s dungeon-like areas. Often times Otus will need to carry an object like a bomb to another area to blow it up or insert an item into another doohickey. They aren’t particularly challenging to figure out, but there are more instances of puzzles than just the story-related ones. Evidently, there’s still some mystery that has yet to be solved by the pre-release media, which is exciting. I have an idea as to what it might be, and you can bet that I’m going back to try to figure it out.

There are also coins to collect that allow for Otus to unlock upgrades for him and his companions. Now, don’t be fooled: you never spend any coins on anything here. You simply have a running total of coins and when it passes certain thresholds, you visit Buccanary’s shop (one of the best NPCs in the game, by the way) and receive some upgrades.

There are a finite amount of coins, and the game plainly tells you how many you are missing from each area. For the completionists out there, don’t worry, there is plenty to keep you coming back after the story has wrapped up. It helps that you’ll want to spend as much time in this world as possible because of how charming everything is! 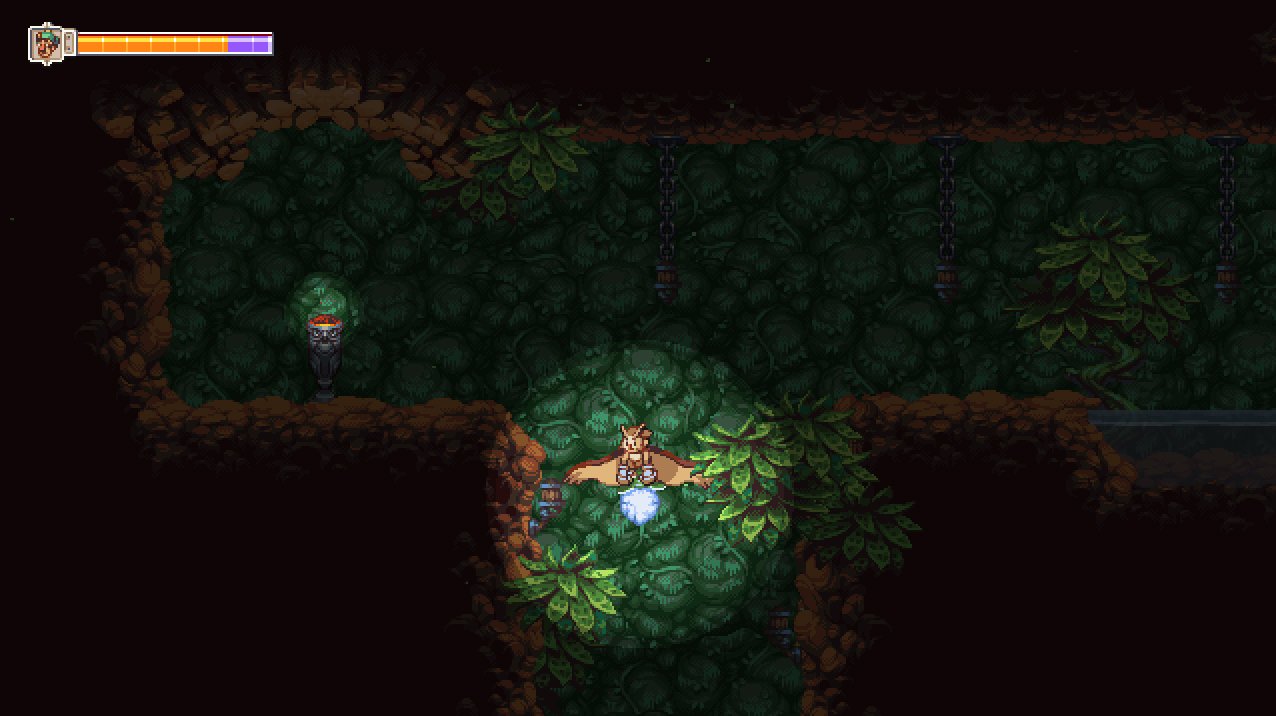 If you haven’t noticed by now, the art is beautiful. It uses “hi-bit pixel art,” which is the technical term for “since when did pixel art look so amazing?!” This is the type of experience where players will, at times, simply stop everything and look around. Have you ever been outside somewhere and all of a sudden notice that nature is unbelievably beautiful? Well, Owlboy is the video game version of that.

And the music! Oh gosh, the music. If there’s a version of Owlboy that comes with the soundtrack, buy that version! I wish I had spent years of my life as a music critic so I could eloquently describe how great it is. The mood constantly shifts from lighthearted to serious to somber to joyous, and all of that would fall flat without strong musical accompaniment. I’ve had some of the tunes stuck in my head for about a week now, and I can’t say that I’d want it any other way.

Dang, I could spend forever talking about moments, both little and big, that occur in Owlboy that are just so smart, but it’s better just to experience them for yourself. The design of everything from levels, characters, abilities, and mechanics all feels incredible. There’s always something new being utilized; rarely will players encounter the same thing multiple times. 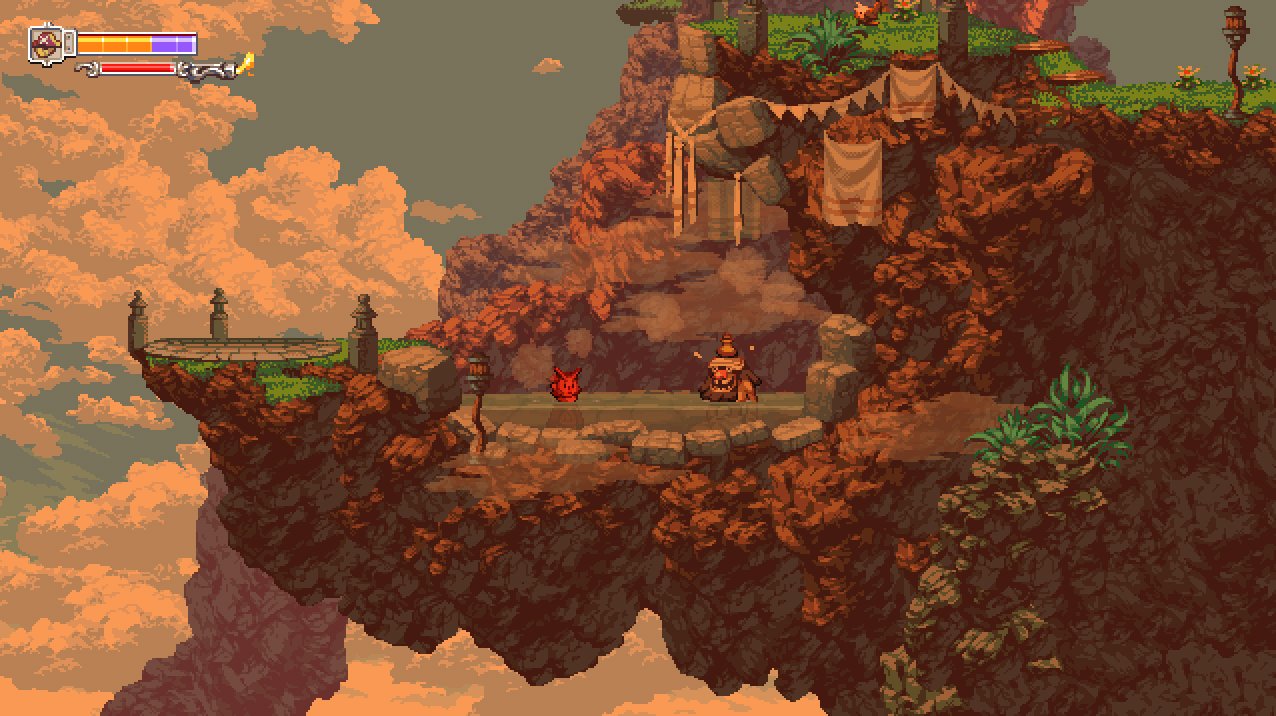 I’m sure you’ve seen people praise the design of games like Mega Man X or even Super Mario Bros., where enemies are casually introduced in a stress-free environment only for the designers to layer other obstacles on top as the player progresses, creating a gradual increase in difficulty. Owlboy takes this philosophy and runs with it, elegantly blending teaching and gameplay into one.

Owlboy is a special game. Almost a decade in the making has certainly allowed for a rarely seen amount of polish and effort in an industry brimming with day-one patches and rushed deadlines. I’m at a loss when trying to think of critiques, honestly. I can’t even say that I wish there was more of it because what is here is just so damn satisfying from start to finish, and I wouldn’t want to ruin that.