Overcooked is an absolute riot.

Some of you already know this. After all, the manic cooking game has been out on a few different platforms since early August. But many of you have yet to experience the joy (and utter misery) of running a kitchen with a partner who isn’t quite on your exact wavelength. You’re missing out.

In search of a weekend time-waster, I bought Overcooked based only on a vague idea of how it plays and a desire for something, anything, with local co-op support. My sister and I were instantly hooked. 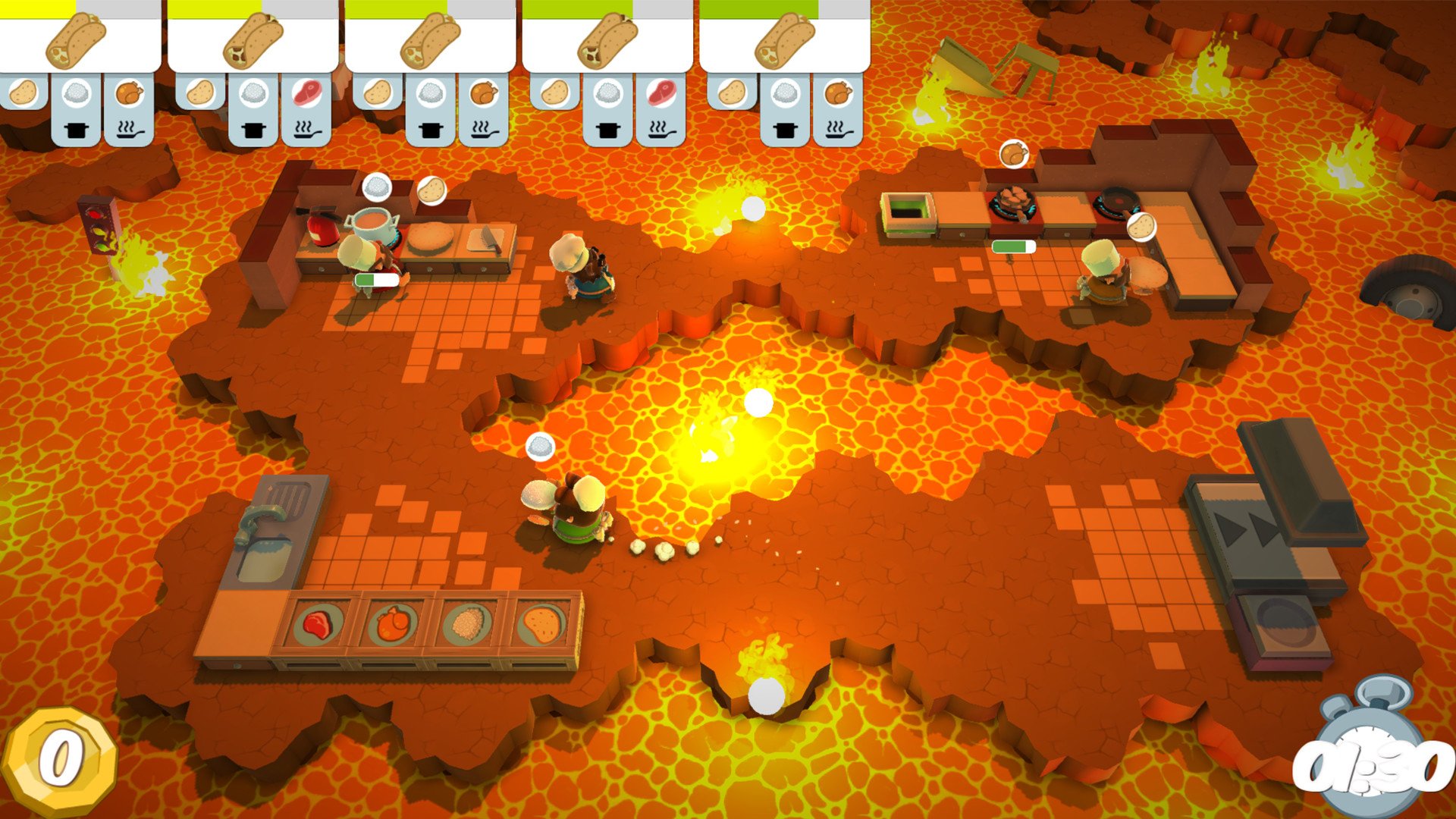 Overcooked is a simple game, and that’s what I like about it most. It’s easy to comprehend and control, but never dull — not even for a second. That approach makes for a wonderful shared experience.

Using only a few buttons, you and up to three other cooks set out to fill incoming orders as quickly and correctly as possible while not getting in each other’s way and burning the whole place down. And if flames spread, well, there’s an extinguisher somewhere around here. Always know where it is.

Let’s take a completely decked-out hamburger, for instance. We’d need a bun, patty, lettuce, and tomato. Easy enough! We can do this together. But first, the bun is going to need a plate — a clean one, at that — so someone get to scrubbing. Another one of you will have to prepare the meat before it can start sizzling, and if you absentmindedly leave it on the burner for too long, it’ll catch on fire, no doubt screwing us all. While that’s happening, we’ll also want to slice the vegetables. Hop to it.

With each of those tasks completed at hyperspeed in a super-cramped space, then and only then can we combine everything and deliver the finished burger for points. Onto the next order which, shit, is about to expire, resulting in a penalty. Actually, wait, forget that. There’s only 20 seconds left to go in this level. Damn! Damn! We won’t have time for that person’s meal! Forget the toppings. Just chuck a barely-done burger through the kitchen window so we get some credit. You’re closer! Go! Oh thank god you made it. Except, wait — what the hell? We were 60 points shy of a perfect three-star run on the level. No way. How do you even begin to pull that off? What could we have done more efficiently?

Whether it’s flipping burgers, baking pizzas, or rolling up burritos, that all-too-real scenario represents my average Overcooked playthrough. It’s equal parts madness and heavenly bliss. Eventually, you don’t even need to yell, much less calmly give directions. Your team can form this master-chef hive-mind in which everybody knows what job to do and when. Then the trick becomes learning each level’s optimum route or strategy — particularly with the more puzzle-like gimmicks where you have to scurry over sheets of ice, or hop between kitchens that are infuriatingly housed inside moving trucks.

While you can play alone (by controlling two separate cooks), it just isn’t the same that way. It’s a lesser experience, one I have a harder time praising. And, unfortunately, Overcooked doesn’t have online support. It’s such a bummer to have to share that caveat. But with even a two-person crew, the game is beautiful chaos. You just need convince one other human to come over and help you save the world. Assuming you don’t irrevocably piss each other off and form a lifelong feud, you’ll probably want to invite them back a second or even third time, too — the time-traveling story is surprisingly meaty.

Aside from from the local-only consideration and some inconsistencies with the scoring criteria and stage layouts, man, what a game. Overcooked is the best co-op experience I’ve had in recent memory, and despite going back through to fully clear every level, I wish there were more. Don’t overlook it.