At this point, with the debut of Night of the Hangry Horde, I can safely recommend that everyone who digs Overcooked 2 should get the season pass at their convenience. It’s twenty bucks well spent. Ghost Town has proven that it knows how to add fun new beats to the rhythm of frantic co-op cooking.

The twist this time around – zombie survival levels – isn’t one I ever would’ve expected for Overcooked, but it works so dang well. In fact, I hope this is only the beginning. Eight horde levels aren’t enough! 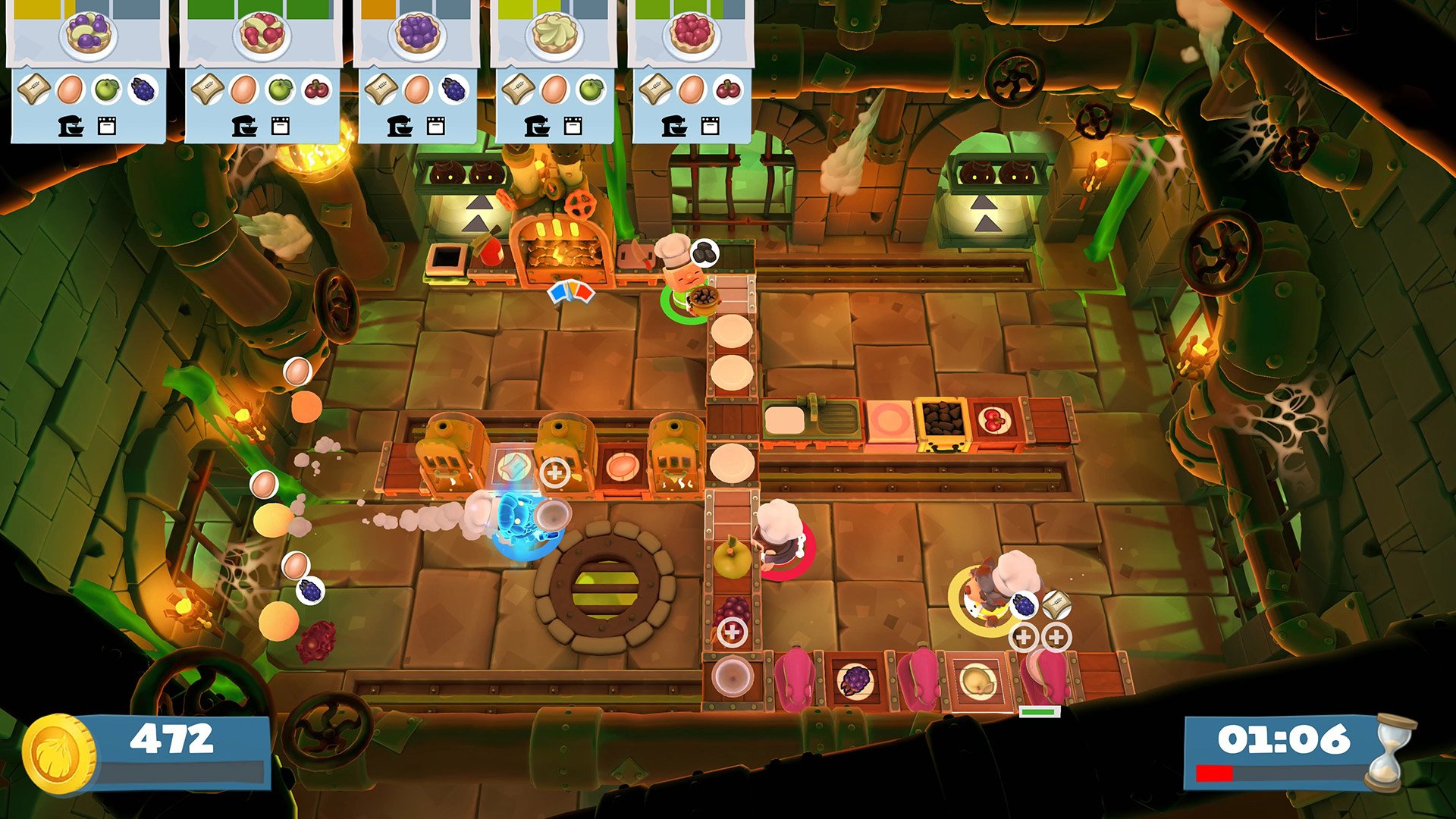 I was a little skeptical going in, but the horde concept ended up being my favorite part of Night of the Hangry Horde. Imagine Call of Duty‘s Zombies mixed with the vibe of Plants vs. Zombies and you’re on the right track. The DLC also comes with nine traditional levels and three secret Kevin levels, too.

You’re still prepping ingredients like normal, but when it comes to delivery, you have more options. The shuffling unbread will try to break down multiple barriers to get into your kitchen, and it’s on you to figure out which ones to prioritize. Do you deliver to the fast-moving chili peppers to take them off the field as soon as possible, or should you get rid of the powerful two-order-craving zombie apple?

Then there’s the matter of repairing. Using funds earned from successful meal deliveries, you can repair your defenses or, in some cases, spend the cash to open up kitchen shortcuts. The horde levels are balanced such that you’re constantly making tough calls on what food to make and which barriers to repair. It’s not uncommon to run out of money during the more hectic horde waves. The timing can be really tight. As for scoring, zombies will chip away at an overall health bar if they manage to break in, and – best-case scenario – you’re shooting to end the level with one hundred percent health.

I can’t say enough good things about how well horde mode meshes with Overcooked. It’s riveting. The final level felt like a 15-minute endurance test and you should’ve heard our exhausted sighs of relief.

The rest of Night of the Hangry Horde doesn’t feel quite as fresh – especially when it comes to the new recipes, which are reaching the point of diminishing returns – but the DLC is still enjoyable overall.

As with some of the other add-ons, there’s an emphasis on improving your cook times (in this case, by intermittently tossing a bucket of coal into a furnace). That mechanic doesn’t do much for me; it’s just another task to keep track of. There’s also a guillotine, perfect for lining up a row of produce and chopping everything in one swoop. It’s satisfying to use, but it doesn’t reach its full potential. Both of these elements, as well as the new fruit pies and roasts, quickly fade into the chaos of Overcooked.

That said, the non-horde levels are all well-crafted. To exceed, you’re going to need to have a solid grasp on strategically throwing food, flipping switches to rearrange the kitchen layout during key moments, and being efficient with when and where you move your pots, pans, and bowls. Both in scope and challenge, Night of the Hangry Horde is exactly where I want Overcooked 2 DLC to land. I wasn’t keeping precise track of time, but it took us three decently lengthy sessions to finish all 20 levels.

If you’re ever in the mood for more Overcooked 2, try not to sleep on Night of the Hangry Horde for too long. Ghost Town Games has really come into its own with these DLC releases. There’s still one final expansion pack left to go in the season pass, and at this rate, my expectations are only rising.