It isn’t often here at Destructoid that we don’t review a game that has been released for almost four years across seven platforms, but Oceanhorn is one of those cases.

This Zelda-like started out as an iOS game way back in the age of Obama in the year 2013, before the dark times we currently live in. The developers at Cornfox & Bros. have managed to combine the setting of The Wind Waker with the multi-layered gameplay found in A Link to the Past in a serviceable game that isn’t quite on par with an actual Zelda title.

So, basically about what you’d expect from an indie attempting to clone one of Nintendo’s biggest franchises. 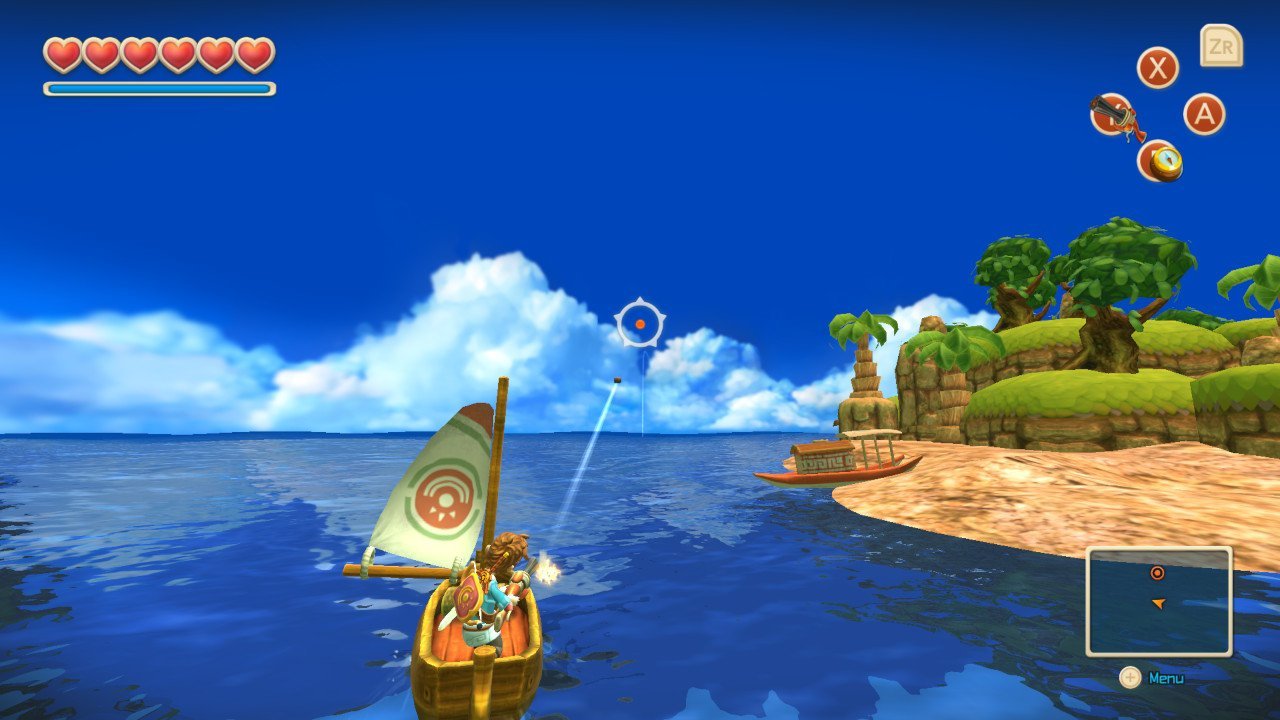 The story of Oceanhorn isn’t all that interesting or important. You play as a boy who wakes to find out that his dad has set out to kill Oceanhorn, a mechanical monster that has terrorized the world they live in. You set sail (literally) to find and help him. Thankfully the sailing here is mostly automatic aside from aiming a gun (which you can only use on the boat for some reason) at some enemies, and obstacles; a process that is over in no time but quickly grows tiresome thanks to how often the game forces you to do it.

There’s a decent amount of islands to discover, all of which can be explored to their fullest in around 12 hours. The islands can consist of repetitive beachy overworlds, caves, dungeons, and, of course, a graveyard. Variety is not Oceanhorn‘s strong suit as nearly every island consists of the same handful of enemies and textures.

Combat is very simple, consisting of swinging your sword, throwing bombs, shooting arrows, and blocking. Thanks to some basic AI most enemies can be taken down quickly just by running up to them and mashing the attack button, which I guess is understandable considering the original version of the game was made for touchscreen devices; that doesn’t mean it is all that fun.

A few other minor annoyances include having to use a menu to switch items when doing so on the fly could have been easily assigned to the shoulder buttons, and checkpoints right before one of the few bosses that force you to watch their introductions each time you die by their hand. Amateur mistakes, if I do say so myself. Worse is that there is a stamina meter for running, swimming, and eventually jumping and rolling. This meter takes far too long to refill and runs out quickly, and the same can be said for the mana meter which requires you smash pots or kill enemies to refill. Pots respawn whenever you enter and exit an area, allowing you to easily refill your mana, so having the meter at all is pointless and stamina only serves to slow down the player’s progress. Two outdated and not at all fun gameplay elements I hope developers stop using, immediately.

I don’t mind how simple most things in Oceanhorn are except for the puzzles, if you can call them that. Most dungeons will have blocks that need to be pushed to specific spots clearly marked on the ground, or levers to be found and swiped to open gates or reveal chests. Rarely did I ever feel like I needed to think about what I was doing, which is alright if you’re looking for a more casual escape from all the hardcore survival and multiplayer-only titles flooding the market these days.

Performance-wise, the Nintendo Switch version of Oceanhorn looks a bit dated, but that makes sense considering this is based on the PC version of the game from two years ago. Plus, the Switch isn’t exactly known for being a graphical powerhouse. That said, Oceanhorn manages to run at a pretty solid 1080 60fps docked, and 720p 60fps while handheld. Meanwhile, the wonderful soundtrack was composed by Kalle Ylitalo and has a few tracks by Nobuo Uematsu and Kenji Ito who are known for their work on the scores of Final Fantasy and the Mana series, respectively.

If you’ve got a hankering for a game with a stamina meter, sword swinging, and pot smashing, there is at least one other better title on the Nintendo Switch that I can think of, but Oceanhorn is an alright little throwback to retro Zelda titles that could help you bide your time between Nintendo’s slow trickle of AAA games this year. Now, when do I get to play the sequel?