Livin’ on the edge

Most people who know me are aware of the fact that the original Mirror’s Edge is my dream game. And I don’t mean that in a nebulous “dreamy” sense, I mean I literally had a lucid dream as a child about a first-person free-running video game, and roughly 10 years later, that game was created by DICE.

The sequel, Catalyst, is let down by over-engineering and very “sequel” things a bit, but the move to an open world pays off in a far bigger way than I could have imagined. 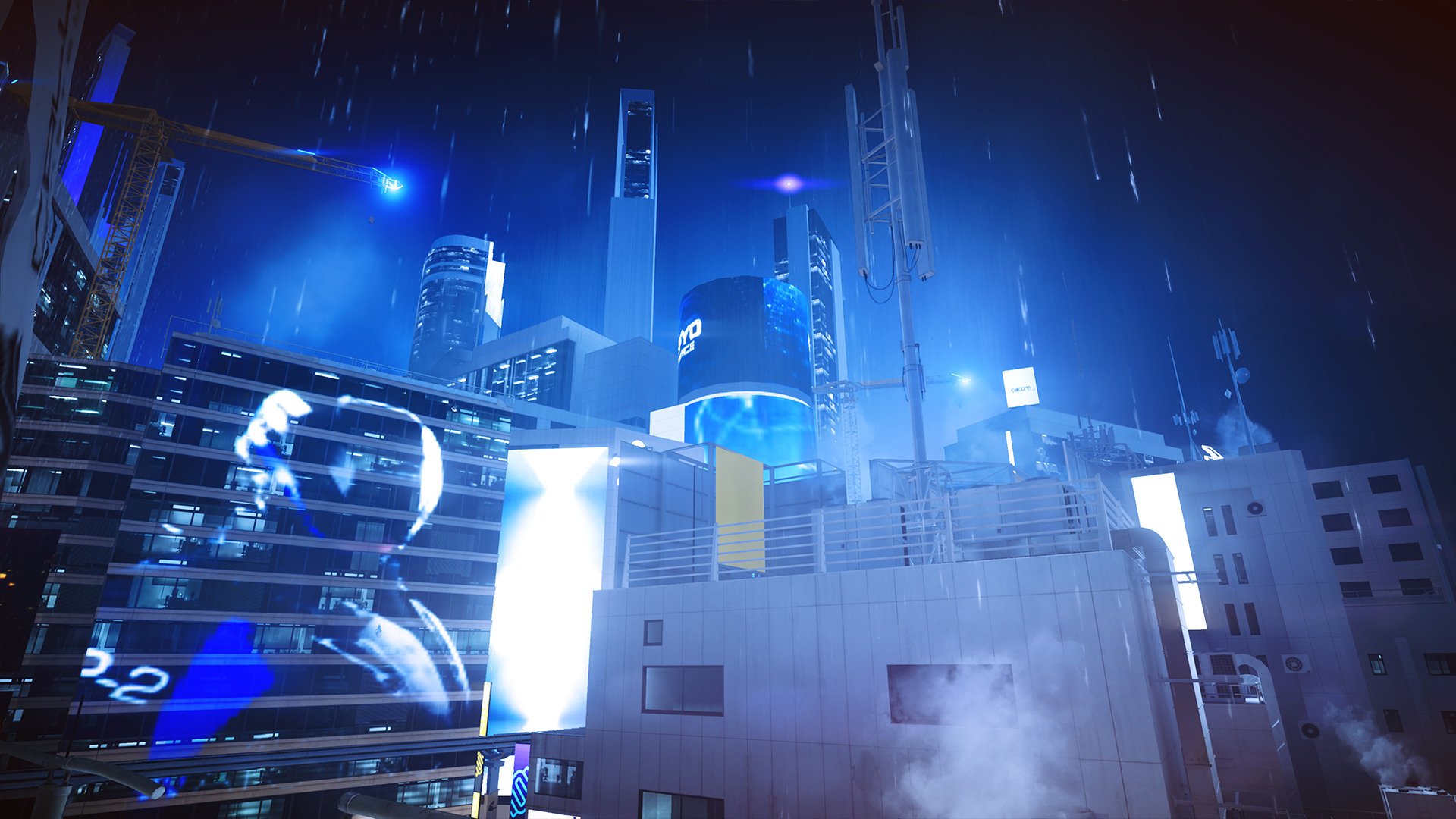 Let’s dive right into the story. Following my adventures last week, it hasn’t improved, not one bit. I remember the exact moment I actually cringed, too — when Catalyst introduced “Plastic,” the “eccentric teenage hacker girl” (exact quote). Just about every character except Icarus, oddly enough (who has an actual arc and some development), is insufferable, and the “good versus evil” parable is so mustache-twirlingly hokey, you can predict every twist and turn. Thank goodness some saintly speedrunner probably advised the team to allow players to press a button to skip every cutscene in the game. My advice? Skip it. Skip it all with reckless abandon.

Alright, now that I’ve settled down, it would be a tad extreme to say that it “ruins” Catalyst, because the original narrative, while not nearly as bad, was kind of a non-starter too. The more I played, the more I was drawn into the world, perfecting time trials (you can create your own now), and the gameplay, which is what matters to me more than anything. There are some incredible setpieces in Catalyst that blow its predecessor away. Offices feel more alive, billboards have some unreal artwork, and the city itself looks beautiful — major credit to the design team for bringing it all to life.

It looks less muted than the first go-around, which has its drawbacks (I quite liked the surrealistic feel of the first game, which didn’t seem like a design limitation so much as a pointed choice), but ultimately I’m glad DICE didn’t copy and paste. As I progressed, I started to notice even more detail, like the almost haunting giant glass server rooms and the cherry blossoms on the rooftops of the more pristine districts. One area reminded me of my favorite Mirror’s Edge experience to date, the abstract “Pure Time Trials” DLC, by way of hanging artwork to grab onto. Nice.

But the time trials here! The best part of Mirror’s Edge? Man, they’re still in. There’s preset runs called “Dashes,” and hundreds of user-created activities, which can be crafted as easily as pressing a button and running the outline yourself. Which leads me to my “eureka” moment for Catalyst — it nails exploration.

After the specter of completing the game was done looming over me, I had the chance to just run around, and hot damn was it fun. One session I must have spent five hours roaming around, never touching one node, opening one menu, or making a point to go for the padded nonsense collectibles. That’s a feeling you can’t replicate in the first, even if the illusion is shattered by opening up the supremely cluttered (to the point of unwieldy) world map.

All of the collectible “orbs” and “chips,” are just… there, and although it can get annoying, they’re not the end of the world. In fact, they can be a welcome respite, a reward for running into a conspicuous area. The closest comparison I can think of is Jet Set Radio Future, which is one of the highest compliments I can give. My reaction to it was pretty surprising, and the same goes for the combat. Really, anything would be an improvement from the first game, and the elimination of guns entirely goes a long way in Catalyst.

At first, I was miffed at the increased focus on fighting here, but eventually I saw it as a new puzzle layer, almost in a Matrix sort of way. The traversal attacks, which basically grant Faith greater striking power if she doesn’t stop moving, is a very cool concept. Oftentimes I’d divine new ways to take out foes in my path while running away. Even the several arena sections (by my count, three in total), which simply should not exist, were tolerable because of this principle. Against all odds, the few “Batman gadgets” like the grappling hook don’t get overly stupid either; crutches to allow one to get across large gaps, to be sure, but fun all the same and most importantly a way to just keep moving. 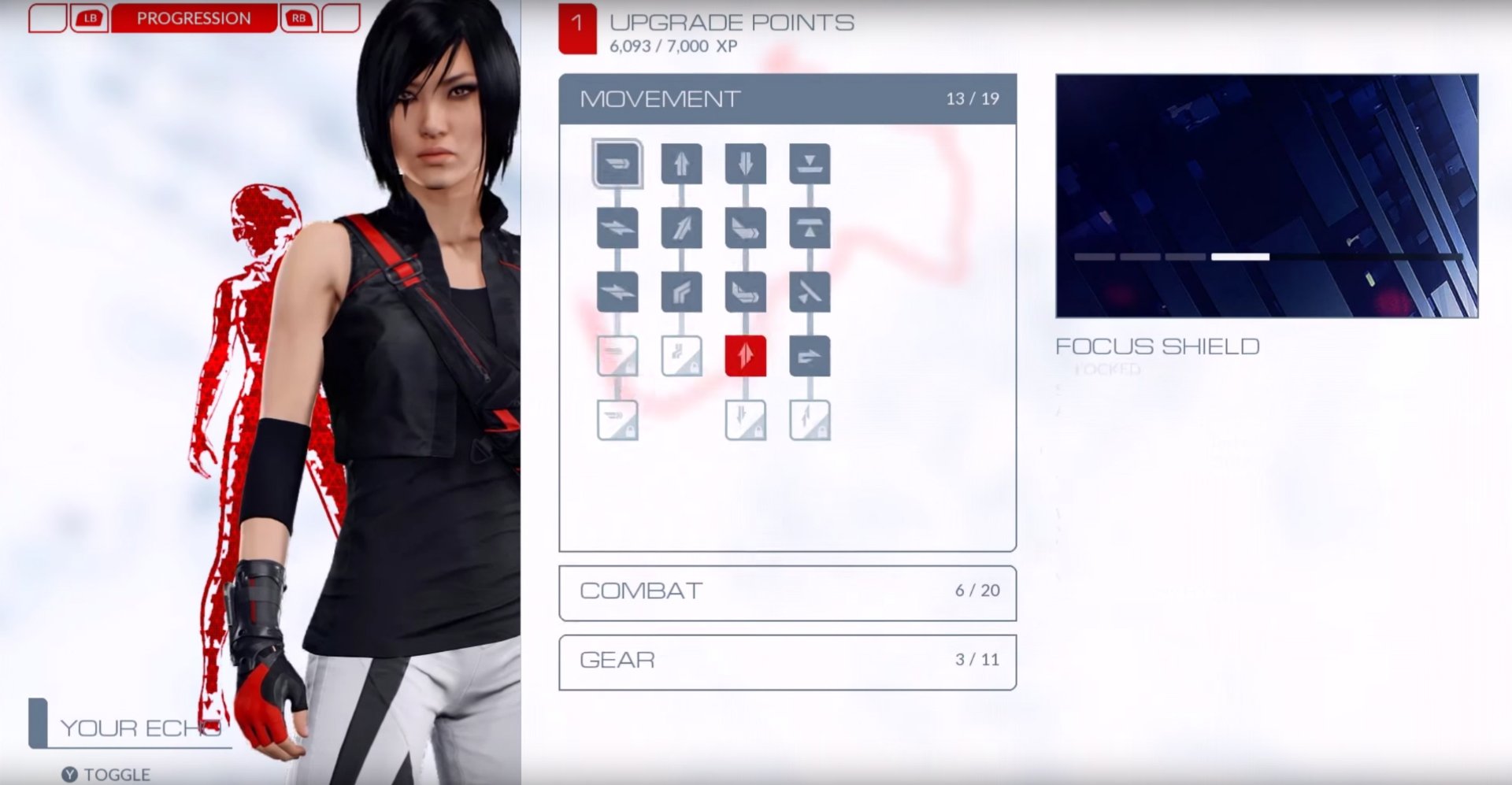 In my estimation, there’s about 10-15 hours of story, 50 hours of collectible bullshit, and endless amounts of free-running to be had. Multiple times in the past few days I’ve popped it in just to mess around and find new routes, and I can foresee plenty of rainy evenings doing just that.

But it’s been quite the journey, as Mirror’s Edge Catalyst is one of the toughest reviews I’ve tackled in some time. It was so hard to acclimate to the changes and suffocating AAA mentality after the original was near perfect, but I think once people get over that initial shock, they’ll come to adore it in spite of that.

[This review is based on a retail build of the game provided by the publisher. This piece was originally published on May 6, 2016.]