You know what puts a smile on my face? Watching Joan Rivers dressed as a princess use a big wad of cash to “Zsa-Zsa” a turkey with a face on its butt named “Twerkey.” That’s funny, and it’s just one of the weird, odd and amusing things I see on my journey to save the faces of Miitopia. 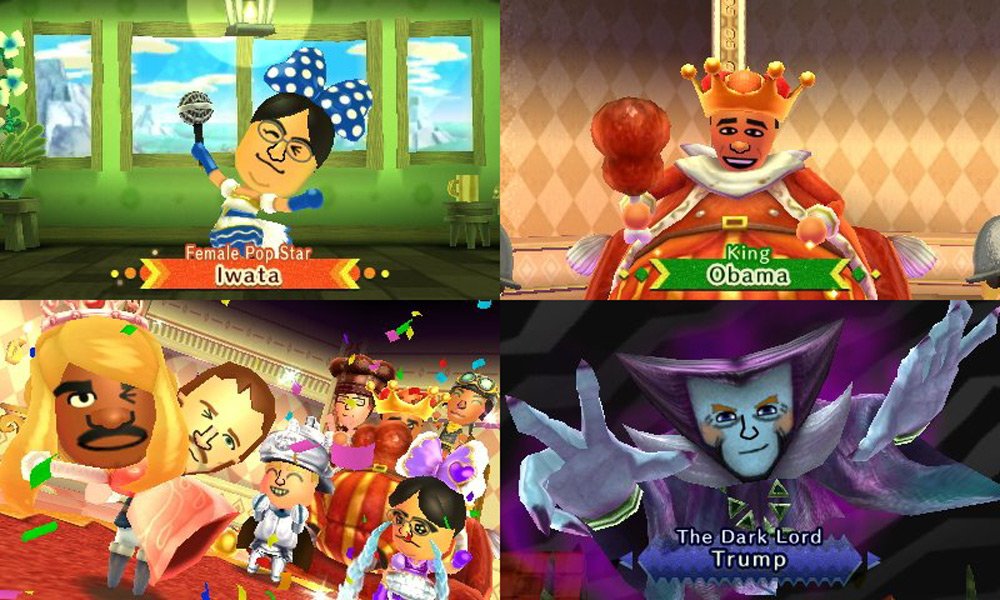 [For a review of the 2021 Nintendo Switch version of Miitopia, click here.]

Try as I might, I cannot talk about Miitopia without bringing up Tomodachi Life. In my preview of the game, I called it Tomodachi Life: The RPG. 33 hours later, I still very much feel the same way. Tomodachi Life is a hands-off life sim that shined due to its unapologetic weirdness and likeability. Miitopia walks a similar path, though its trail is marked with monsters and mayhem.

The cause of that mayhem is the vicious Dark Lord. He, as well as everyone else in the game, is made up of Miis. Townsfolk are selected at random, but the central players are left up to me. I opt to let fate decide who is cast in the role and end up with Dark Lord Trump, one of two different Donald Trumps found in my game. I’ve also come across three Bayonettas, fat Obama, beautiful princess Doc Lewis, two Kirbys, and the worst looking Mr. T I have ever seen. You know all those extremely creative looking Miis of Pokemon and cartoon characters we’ve seen over the years? Sorry but most of them look like absolute crap in this game.

The Dark Lord is on a bit of a face hijacking spree and it’s up to me and my team of nine other Miis to stop him. Every character in my squad I create from scratch, generate from a QR code, select from the residents of my Tomodachi island, or grab from the online-required Mii Central. I don’t know why I can’t pick a face from Mii Plaza, but I can’t. After a character is designed, I assign them a personality along with a class. Both of these decisions are of great importance because they dictate how a Mii will act in my adventure. A “cool” character, for instance, will occasionally dodge an attack. Energetic characters may become so excited to fight they hurt themselves while laid-back Miis will often hide behind a friend to avoid getting hurt, jeopardizing their relationship. The same goes for classes. Amusing jobs like chef, tank, and imp will use their friends as a weapon whether they like it or not.

It’s my job to keep everyone on speaking terms. That’s the whole point of this shindig. The stolen faces and Dark Lord provide the motivation, but it’s building unbreakable relationships that is the overall goal. I’m basically the babysitter of the bunch and as such, I choose to give up control of my original Mii to the AI. It honestly feels like the intended way to play this turn-based RPG. I have no battle control over the other characters anyway, so why not let my Mii make his own decisions. If Bob Belcher the chef, Terra the flower, and Nurse Joy the cat can act on their own, so can CJ the scientist.

Whether I choose to play a passive role or one that is more active, I have a set of tools to assist every member of my team on the journey. With magic salt shakers, I can refill their health and magic, breathe new life into their fallen corpse, shield them from attacks, or give them the Miitopia equivalent of cocaine to do massive damage. I can also move an injured Mii to a safe spot where they can regain their health and magic away from the carnage of combat.

Outside of battle, I decide sleeping arrangements, food dispersal, class changes, and which Miis are allowed out into the field. I can also give money to a Mii for new gear though they may choose to buy something else instead. Eating is important as it increases stats that stay with the character if I decide to change classes. Room assignment dictates which Miis build friendships as well as help them get over a feud. Characters will often request I place them with a specific person, a process that unlocks a short scene between the two. 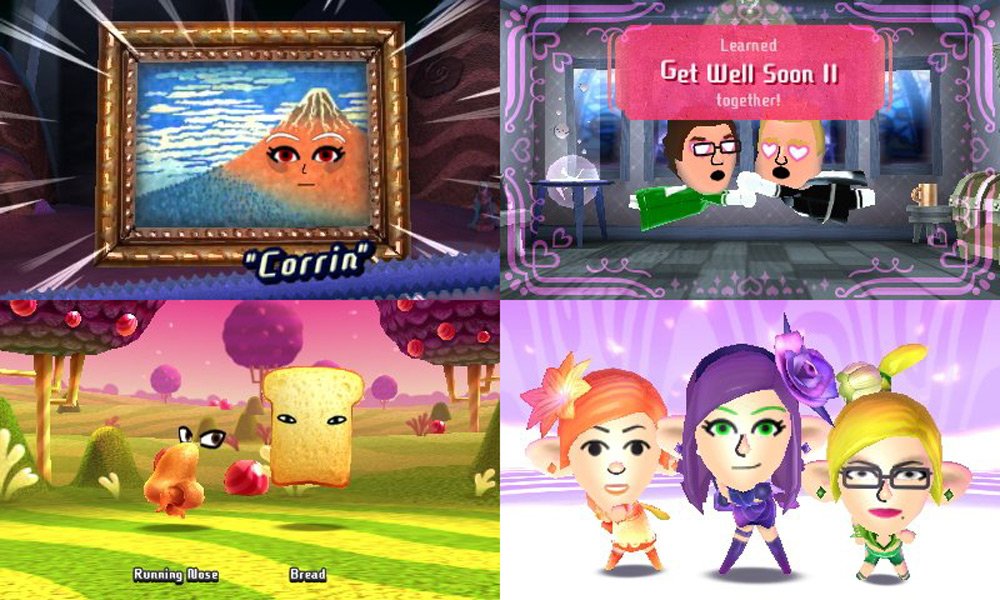 These little episodes, as well as the banter between my squad as they hop and skip their way across the map, grow old long before my adventure ends. The quite ordinary events repeat far too often, forcing me to watch characters have a conversation I’ve already witnessed. The chatter on the world map largely doesn’t make sense. There is no real dialog happening, just random sentences popping up from time to time. It’s all cute at first, but after 34 hours, I find it less amusing to see Morgan Freeman wonder if anyone just farted.

Despite the repetition, it’s worth it to see the end results of the relationships my team has built play out in battle. There is something endlessly invigorating about watching these Miis work together to defeat their enemies. They team up in attacks, occasionally bombarding an adversary with a 4-on-1 assault. They come to each other’s aid when one of them gets hurt. If a Mii falls in battle, one of his friends may avenge him with a devastating attack or risk life and limb to save the friend they care about so much. It’s such a fun, positive experience, culminating in a final battle that really is the sum of everything I work towards.

With the easy 30-hour campaign behind me, I’m having a great deal of fun with the post-game content. There are new maps to unlock, new classes to discover, and daily quests I can conquer. I could easily stop playing now and dive into something a bit meatier, but the pleasant nature of Miitopia, as well as seeing so many poorly recreated famous faces in random roles, is a curio that deserves to be kept in my 3DS until I see it through to the very end.