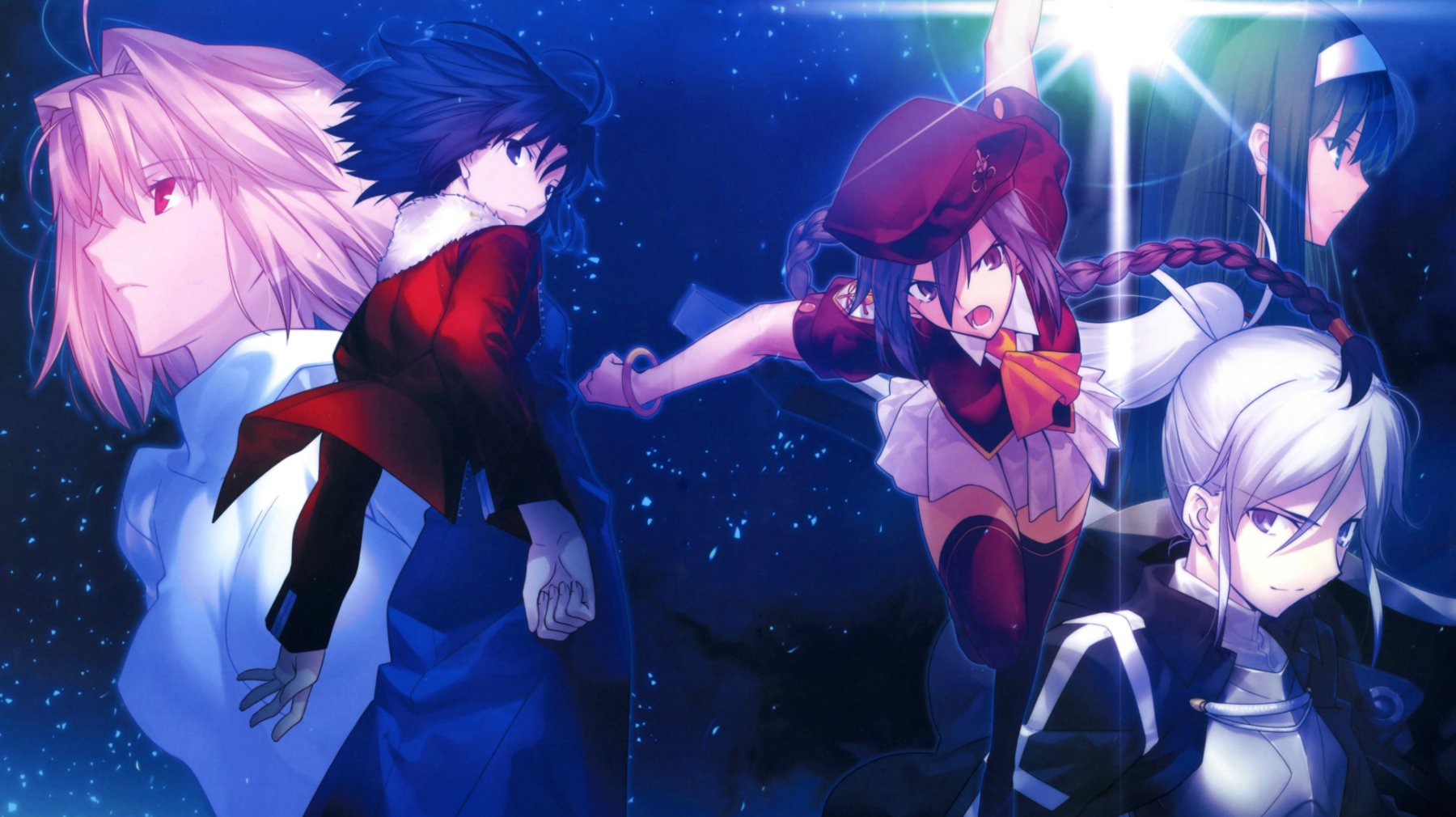 In the 1960s, the United States imposed an embargo upon Cuba that has, for more than 50 years, forbid American citizens and companies from doing business within the nearby island nation.

As a result, the influx of cars into the country, amongst a myriad of other products, has been severely restricted, thereby forcing many Cubans to continue driving “classic” pre-embargo vehicles to this day. For outsiders, setting foot on Cuban streets and looking at the traffic can feel like stepping back in time. It’s an idiosyncrasy that draws a stark comparison with much of the rest of the world, including a nation just 90 miles away, where droves of people trade in cars every year for newer, shinier models.

On an admittedly less profound and politically-influenced level, Melty Blood feels similarly out of step with its surroundings. It’s a relic from a bygone era that has persevered far longer than anyone could have expected. With the support of a zealous, cult-like community, it’s a project the teams at French Bread, Type-Moon, and Ecole Software have kept on the road for more than a decade by continually tinkering with its mechanics and making special modifications underneath the hood of its aged chassis.

She may not look like much, but she’s got it where it counts, kid. 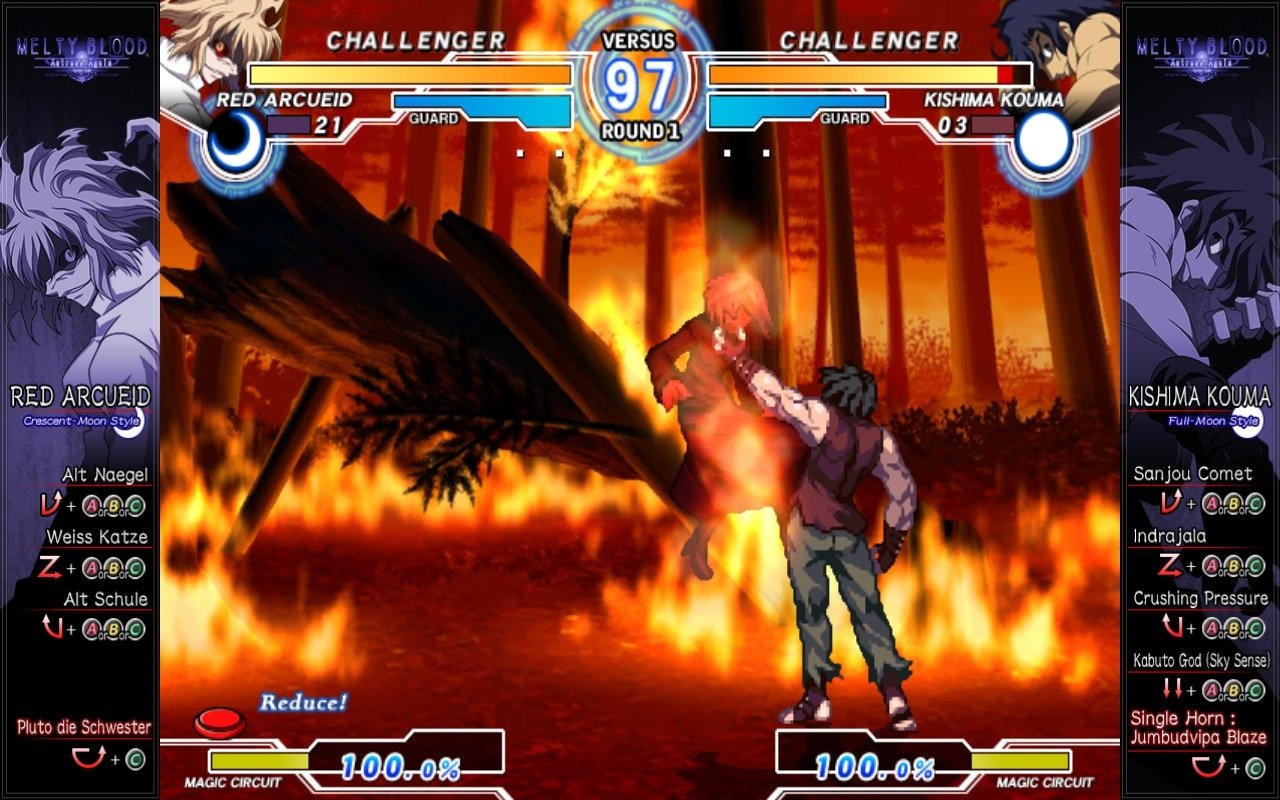 Melty Blood originally debuted in 2002 at Tokyo’s winter Comic Market, a doujinshi fair that draws hundreds of thousands of people biannually. At the time, it was a hybrid of fighting game and visual novel based on Type-Moon’s adult-oriented Tsukihime franchise, which had released at the same event two years earlier. Since then, its makers have moved away from the visual novel elements of the game and refocused on the combat, publishing various iterations of the experience on a number of platforms.

This process continued until 2011, when the dreadfully-named Melty Blood: Actress Again Current Code made the jump from arcades to PC. And now, half a decade later, it’s finally been officially localized.

I say “officially” because Melty Blood has had an international following for years. Despite having not been published outside of Japan until now, it’s always been a sort of esoteric darling of the fighting game community, making regular appearances at tournaments (even if relegated to less-than-ideal locations, like hallways and parking lots, or so the story goes), including a featured spot at EVO 2010. 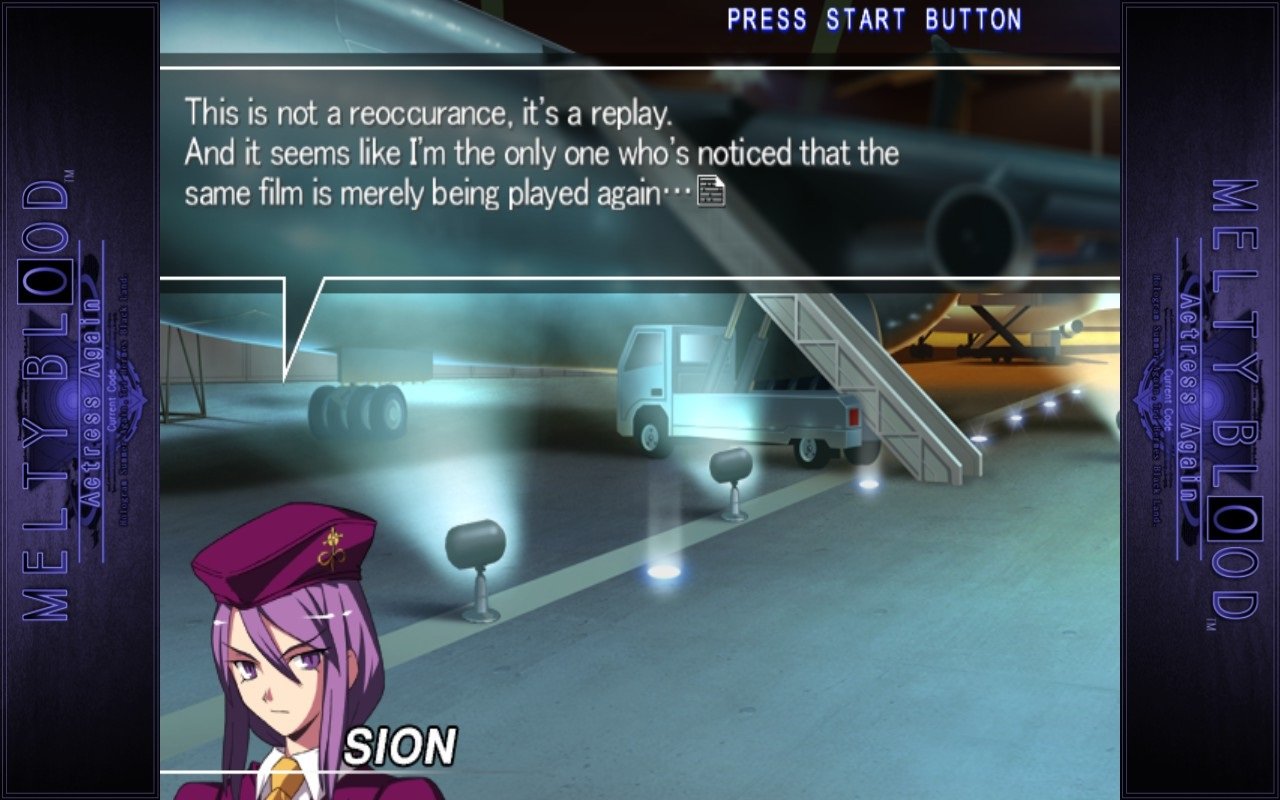 Full disclosure: While Melty Blood has been on my radar for years, I didn’t come into Actress Again with a great deal of knowledge about the series or its source material. I did, however, recognize Sion Eltnam, who made a guest appearance in French Bread’s more recent and also incomprehensibly-named gem Under Night In-Birth Exe:Late. But beyond Sion’s familiar face, the finer points of Melty Blood‘s story were lost on me. Which, honestly, is fine. I’m just here for the action. And on that front, it delivers.

As fighting games go, Melty Blood is of the fast-paced aerial variety, and is also the sort that aims to be easy to pick up, but difficult to master. Since none of the basic commands require much more than a quarter circle or z-motion to pull off, chances are, anyone who has played a 2D fighting game with any regularity shouldn’t have too much trouble getting started with this one.

With that said, there are a number of baroque systems bubbling beneath the surface of Actress Again that could keep you busy for a lifetime. One of the first ones you’ll notice is when selecting one of the game’s 31 (!) characters. At the outset of every match, players will be prompted to select one of three Moon phases (crescent, half, and full), all of which have a unique impact on how a given character plays. 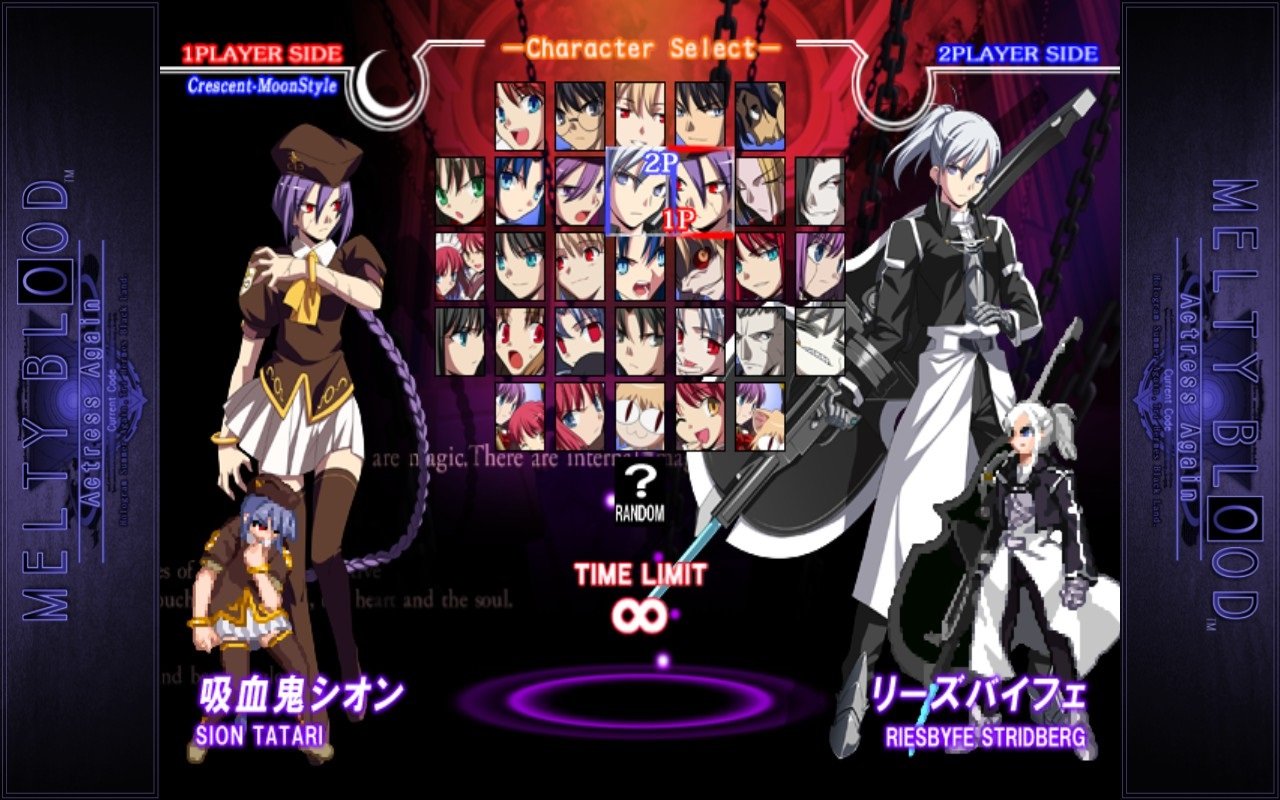 Similar to the Groove system from Capcom vs. SNK 2 and Street Fighter Alpha III‘s ISMs, Moon phases alter how characters maneuver, build meter, deal damage, and even dictate their movesets. While a Crescent Moon character looks identical to her Full Moon counterpart, they can play very differently. The specific impacts of Moon phases vary from character to character, but, generally speaking, Half Moon characters typically trade power for extended combo potential and defensive options, while Full Moon ones go all-in on power, and Crescent Moon types represent a more balanced style of play.

The controls use a four-button setup, with three buttons for attacks and one for defense. The latter can be used both to shield against chip damage (at the cost of meter) and perform EX Guards, which, similar to Street Fighter III‘s parries, allow players to use a well-timed block to reverse an incoming barrage of attacks, and strike back at their opponent within a momentary frame advantage window.

There are also other defensive options, some of which depend on a character’s Moon phase, including dodges, defensive bursts, and more complex maneuvers like cancelling out of a Shield Bunker (another type of counter) into an attack. But even when you fail to avoid taking damage, there are systems that allow you to reduce how much pain you’re feeling and even use meter to recover health. 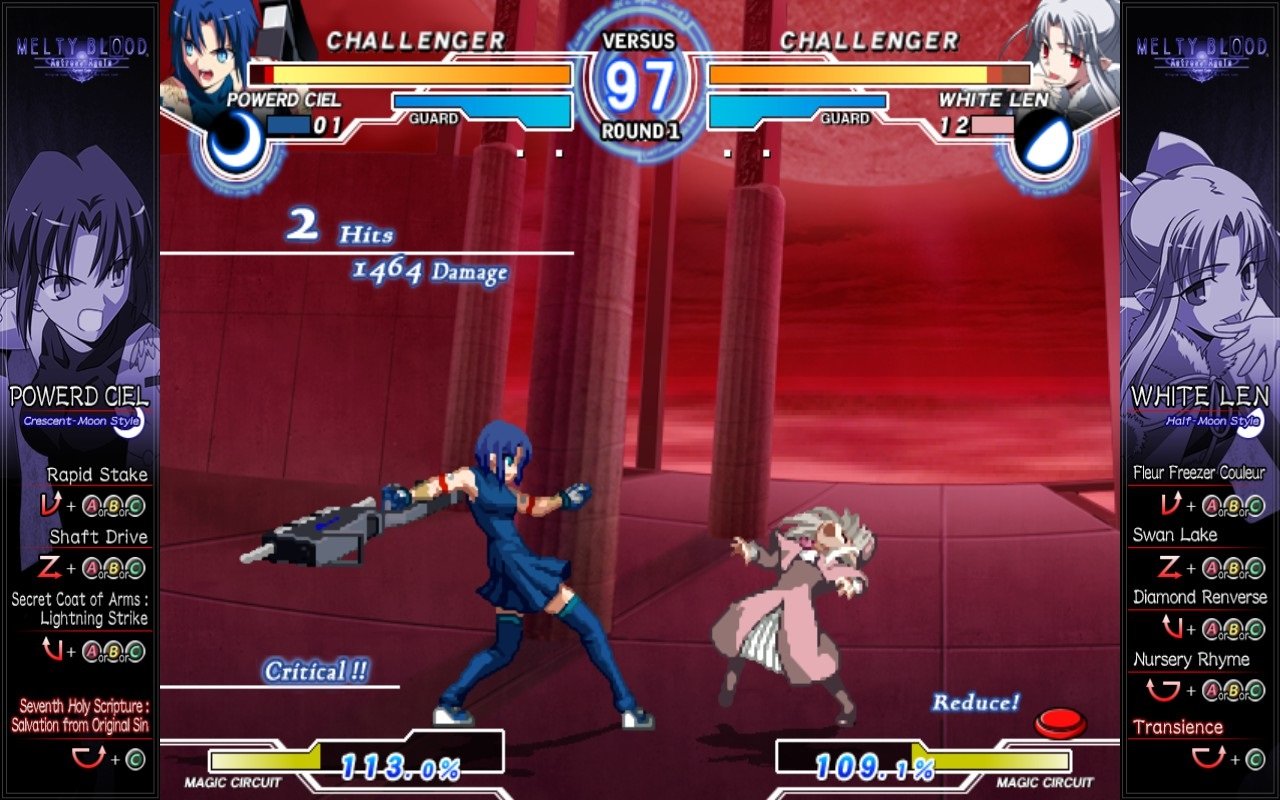 One of the more interesting aspects of Melty Blood is how it handles combos. Its combat system is incredibly flexible. By allowing reverse beats (moving from stronger attacks to weaker ones), it opens up a wealth of possibility for chaining attacks together. Essentially, so long as you don’t repeat or jump out of a combo, you can continue stringing hits together and pin your opponents up against the wall with a seemingly interminable salvo of punches, kicks, and whatever else you may have up your sleeve.

I could go into infinitesimal detail expounding all the intricate systems at play here, but suffice to say, Melty Blood is an incredibly fast, deep, and enjoyable fighter in the time between bells. Unfortunately, the rest of the package isn’t quite as fleshed out as its combat systems.

In contrast with other fighters on the market, Melty Blood only does the basics: arcade, training, versus, and network modes. While the training options are surprisingly robust, the game doesn’t go out of its way to teach players its mechanics, meaning you’ll need to seek outside help in the form of guides and tutorials, or just figure everything out for yourself. Also missing are non-essentials like survival and score attack modes, which can provide a nice change of pace and bring some added value. 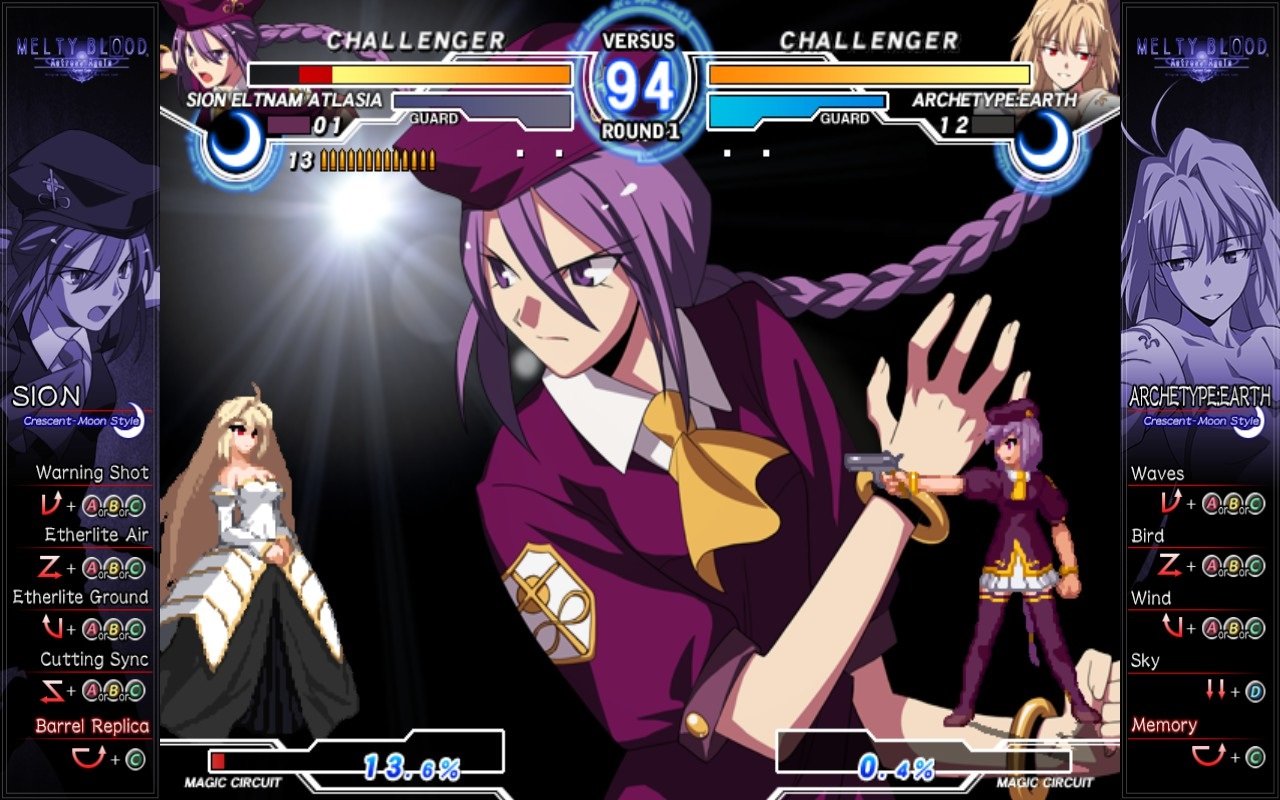 The spartan nature of the package is by no means damning, but the current state of the net-code may give some players pause, as disconnects and latency issues have been a problem for the game since launch. However, publisher Arc System Works (Guilty Gear, BlazBlue) has been working to improve the online experience with post-release patches, which, at least in my experience, seem to have improved things thus far. While the situation isn’t entirely remedied just yet, it figures to improve with time.

Aesthetically, it appears a tad timeworn in stills, with its 4:3 aspect ratio and chunky pixelated visuals, but Melty Blood is genuinely gorgeous in motion. The animation here is top notch, as is, I would remiss not to mention, the varied and quirky soundtrack that accompanies the experience.

Nearly 14 years after first bursting onto the scene, Melty Blood has aged to the point of near-perfection. While a few aspects of the package leave something to be desired, the fact remains that, at its core, this is a supreme fighter with a diverse roster and deep, compelling mechanics that merit your attention.