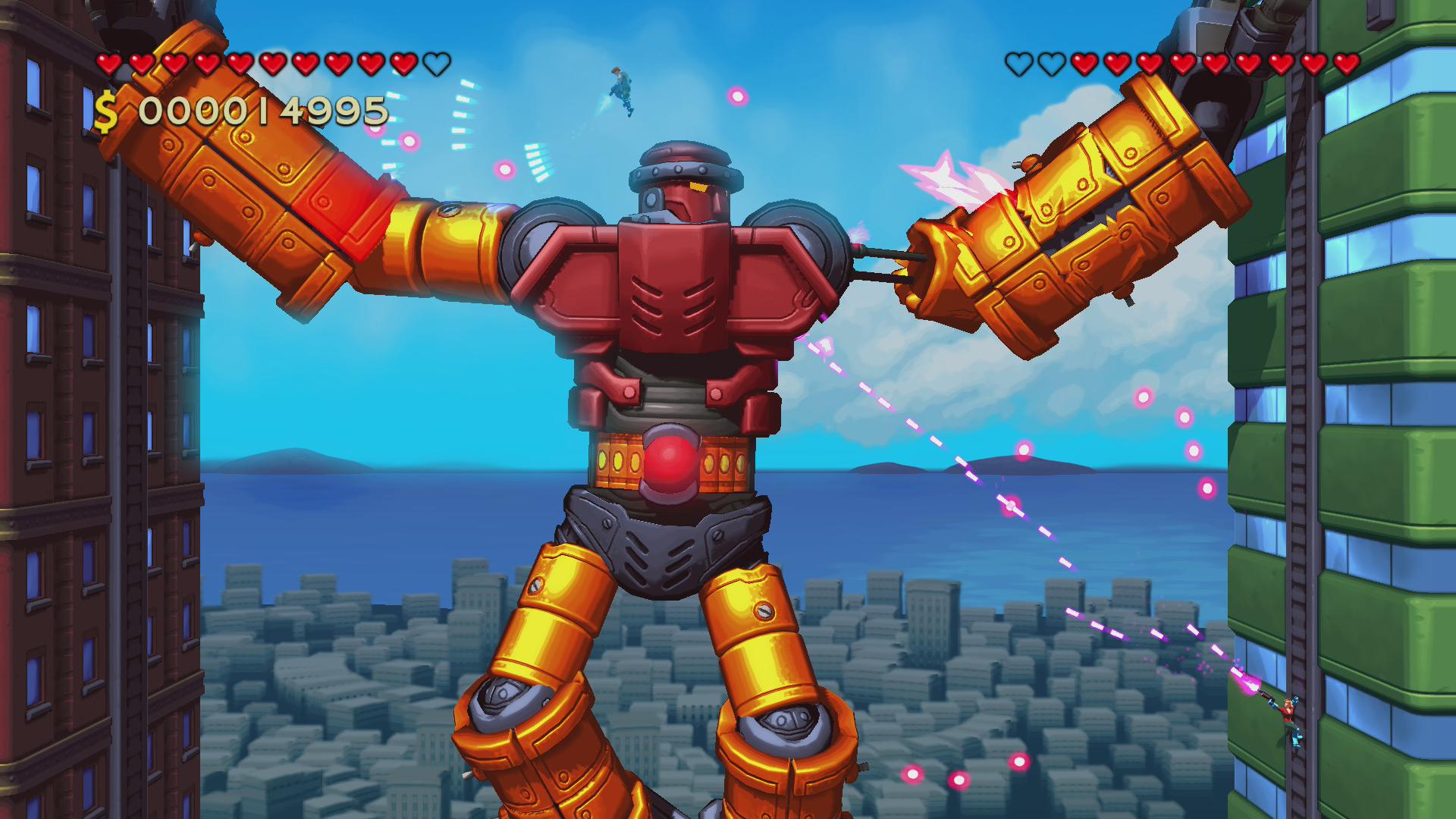 Mechstermination Force came across the table as I was knee-deep in three other major projects, not to mention the behind-the-scenes mischief I manage alongside of Jordan and Brett.

But everyone needs a break, and one day I decided to boot up Mechstermination on my Switch: five hours later, here I am. I’m not only glad I played the game, it also allowed me to come up with that bomb-ass subtitle.

Mechstermination Force is the latest game from a very small team helmed by Bertil Hörberg, the genius who brought us the Gunman Clive series. Hörberg knows 2D action inside and out, and rather than go the side-scrolling level-based platformer route again, he opted for a Contra-style game with a boss rush focus: I can get behind that.

In a world threatened by mechs, a small…force rises up against it, and it’s your job to use your basic skills (moving, shooting, and ducking, which allows you to lock your aim) to take them down. As you can imagine each encounter draws from various action inspirations both old and new to provide puzzle-like fights that are often filled to the brim with frustrating (in a good way) surprises. As in, you finally think you’ve bested a multi-phase boss with one heart remaining, only to find out that they have one last crazy desperation move left.

Each mech has something new to add to the table; another riddle to solve. While I’ll refrain from spoiling specifics here, some solutions are relatively out of the box, like making a frame-perfect jump to reach a new area on top of the mech itself, or shooting an appendage to open up a glaring weak point. As soon as I heard my wife discover a solution and shout “go under his foot and shoot him in the nether regions!” I knew there was something special here. While a lot of the game’s soundtrack isn’t quite as memorable as I’d like, the few tunes that are etched in my brain fondly reminded me of Punch-Out!!, a perfect analog for what Hörberg is trying to replicate here.

Tagging her in was easy enough, as she leapt into my solo session instantly with no problems, without the need for any context. “Shoot mechs, get paid, upgrade.” That’s all you have to know as you navigate the game’s mostly three-button system. Weapons and health purchases are shared between co-op partners so there’s no need to micromanage anything: the action is the focus. It’s an arcade-influenced joint through and through.

But that simplicity comes at a cost. If you’re not interested in running previous levels over again, Mechstermination Force won’t last you more than a rainy day. Now that’s perfectly fine, but there aren’t enough incentives or meaty bonuses to keep going beyond the expiration date, and all of the characters (by design) have the same basic movements and abilities.

Another hang-up for me is the floaty controls which caused more than their fair share of accidental deaths. Jumping can be an imprecise pain, and the game lacks a dodge button from the very start. I don’t even want (invincible) iFrames necessarily, just more control out of the gate. It’s not as noticeable as you take on a few of the easier mechs but builds up as you go on to some of the longer skirmishes.

My complaints with Mechstermination Force are straightforward because that’s really what the game is, a boss rush shoot-fest. If the stars align and you can find someone who really enjoys 2D shooters, give the game a go: even its fleeting joy is worth the entry ticket. Hell, it’s worth it if you go alone, so long as your expectations are in check.