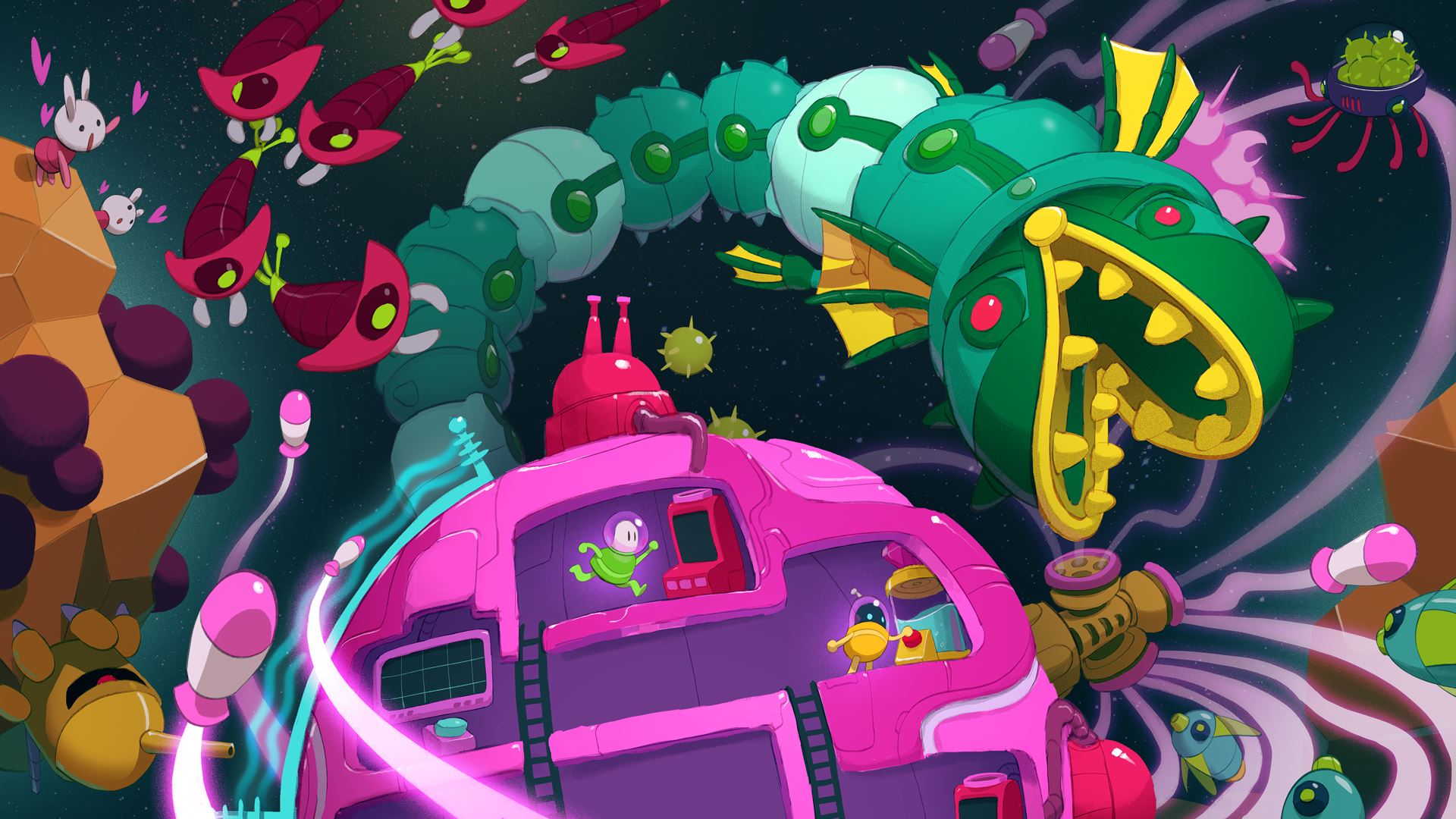 The Power of Love

Throughout my history of gaming there have been games that stand out as important bonding experiences: Bubble Bobble with my mom, Bomberman with my college roommate, and now Lovers in a Dangerous Spacetime with my lovely boyfriend, Gage. This marks the first game we’ve ever finished without a nearly relationship-ending fight, we were truly Lovers in a Dangerous Spacetime and — much like the game — it was beautiful.

If you have a friend, roommate, grandma, or anyone else that you would like a bonding experience with, look no further than Lovers.

Lovers in a Dangerous Spacetime takes place in outer space, the final frontier, a place of wonder filled with various anthropomorphic species, and a heart-shaped space station called the Ardor Reactor, which is powered by love and protected by the League Of Very Empathetic Rescue Spacenauts, also known as The Lovers. Everything was fine and dandy until the dark forces of anti-love destroyed the Ardor Reactor, ripped a hole in spacetime itself and took prisoner many of the lovely inhabitants. That is where The Lovers come in to save the day, running to and fro to control their circular spaceship while spreading love throughout the cosmos.

While the story isn’t exactly new — evil force caused by evil being ruins the day, fix it — the cute presentation and charm more than make up for it. Everything in Lovers is completely adorable, including the enemies. Lots of bright colors fill the screen, and love is emphasized at every turn.

As you and a friend guide The Lovers through spacetime you’ll be jumping from role to role inside various circular spaceships. Stations include thrusters, shields, turrets, navigation, and laser. Manning the guns is a pretty straightforward affair of aiming and firing, shields can be rotated around the ship to prevent damage from terrain, enemies, and projectiles, and the laser can be triggered causing it to automatically fire while rotating around the ship before needing to cool down.

Piloting the ship is a bit different than any other game I’ve played. By default, you’ll be rotating a thruster around the outside of your ship to determine what direction you’ll be heading. If the thruster is on the bottom left of the ship, you’ll be heading up and to the right, if it is on the top then you’ll head down, and so on. While it may sound confusing, piloting only requires the brief tutorial to get used to and you’ll be zipping through the cosmos in no time as if it were second nature.

Your goal throughout each colorful level in the four campaigns you’ll be exploring is to find five of a possible ten captive critters to advance to the next stage. Collecting critters also increases your ranking, which unlocks different ships and upgrades for them, so exploring to find all ten critters per stage has its benefits. Gems are also found floating in containers in each stage and can be used to power up each station with power, beam, and metal abilities.

Stations can be upgraded to hold two gems each, allowing you to mix and match gems to gain different effects. For example: two metal gems on the shield form a large spiky barrier that rotates a bit slower than other shields but provides more protection, or a power gem and a metal gem on a turret creates a powerful rocket that can be manually controlled. Experimenting with gems until you find the perfect configuration is exciting and leads to hilarious results, especially on the laser.

Campaigns have four levels and then a boss fight with massive creatures based on real-world constellations. Boss fights are as you’d probably expect: learn the bosses pattern, take its health bar down enough to piss it off, avoid an even larger barrage of attacks, success. Don’t be fooled though, bosses are no pushovers and we found ourselves teetering on death whenever we finally defeated each boss.

Nearly every level seems to add at least one new enemy or mechanic, which keeps the entire journey fresh. The first campaign gives you the basics, before later campaigns add underwater combat, solar winds, and even wormholes that teleport you throughout the stage. Some of the more interesting stages include stationary defenses against waves of enemies and one particular stage that had to be completed in under five minutes before a star explodes killing everything in sight.

We rushed through this time-limited level and ended up getting the last of ten bunnies with ten seconds to spare on the clock. We could see the exit as the clock hit zero, but luckily for us the explosion was a gradual one allowing us to make it by the skin of our teeth. I’ve never held my breath during a game as much as I have during Lovers, which makes the sigh of relief afterwards all that more rewarding.

After finishing each campaign you’ll be awarded a badge showing that you’ve completed it with each ship. While it isn’t necessary to complete each campaign with each ship to reach the ending, it does add a bit of replayability and difficulty, especially if you’re using the Jelly Roll ship. When piloting Jelly Roll your thruster rotates the entire ship, causing your controls to also change inside the ship along with it. When we played through one campaign with the Jelly Roll we found ourselves getting confused but laughing about it the whole time, though it certainly made the boss extra challenging. Completionists will be happy with the unlockable ships and added difficulty they provide.

Completing each campaign unlocks new cute Lovers to play as which don’t change the gameplay, but instead just add to the overwhelming amount of cuteness the game already oozes. One of my favorite things about the Lovers is they have no gender signifiers, thus allowing you to technically be any gender you so wish to view yourself as.

Those of you without a couch cooperative buddy — as there is no online mode — will be playing alongside a computer-controlled cat or dog that can be directed to man each of the stations at your will. Unfortunately your CPU partner will not control the thrusters, so all driving will be up to you, but the AI is very competent at the other stations. While Lovers is still very much playable as a single player title, it certainly shines as one of the best co-op experiences I’ve ever had and that is the way I feel it is meant to be experienced. Being able to blast asteroids and baddies out of the way while someone else is driving the ship is far more fun than watching an AI do it for you.

Lovers in a Dangerous Spacetime reminds me why I love video games, because it provides a unique and colorful journey to get totally immersed in that can be enjoyed with a loved one. Probably the most original game I’ve played to completion in the past five years, and worthy every penny of its asking price. If you’ve got a loved one to play with, do yourselves a favor and play this game as soon as possible, you won’t regret a your lovely journey through space.