Let’s be real, this is the best Fantastic Four game we’re ever gonna get

Lego games haven’t changed much since their debut in the PS2 era (and yes, it’s really been that long, and you’re really that old). For better or worse, TT Games settled on a formula that seems to work, and the company has stuck with it for nearly 15 years. Every Lego game lets you take control of various characters from the franchise du jour, pound the crap out of the scenery to reduce it to its component atoms, then reassemble some pieces in a different configuration in order to progress through levels based loosely on the source material.

Despite the pedigree of the movie version of The Incredibles and the fact that this is the first Lego game to feature Pixar characters, Lego The Incredibles doesn’t deviate even slightly from the formula first put forward in 2005. It does let players explore a unique world and includes a lot of fanservice for kids (and adults) who’ve been raised by Pixar movies. I thought it was pretty neat to see the hopping lamp made of plastic bricks when the game first starts up, but whether or not that image triggers something in you will have a lot to do with how much you’ll enjoy Lego The Incredibles. 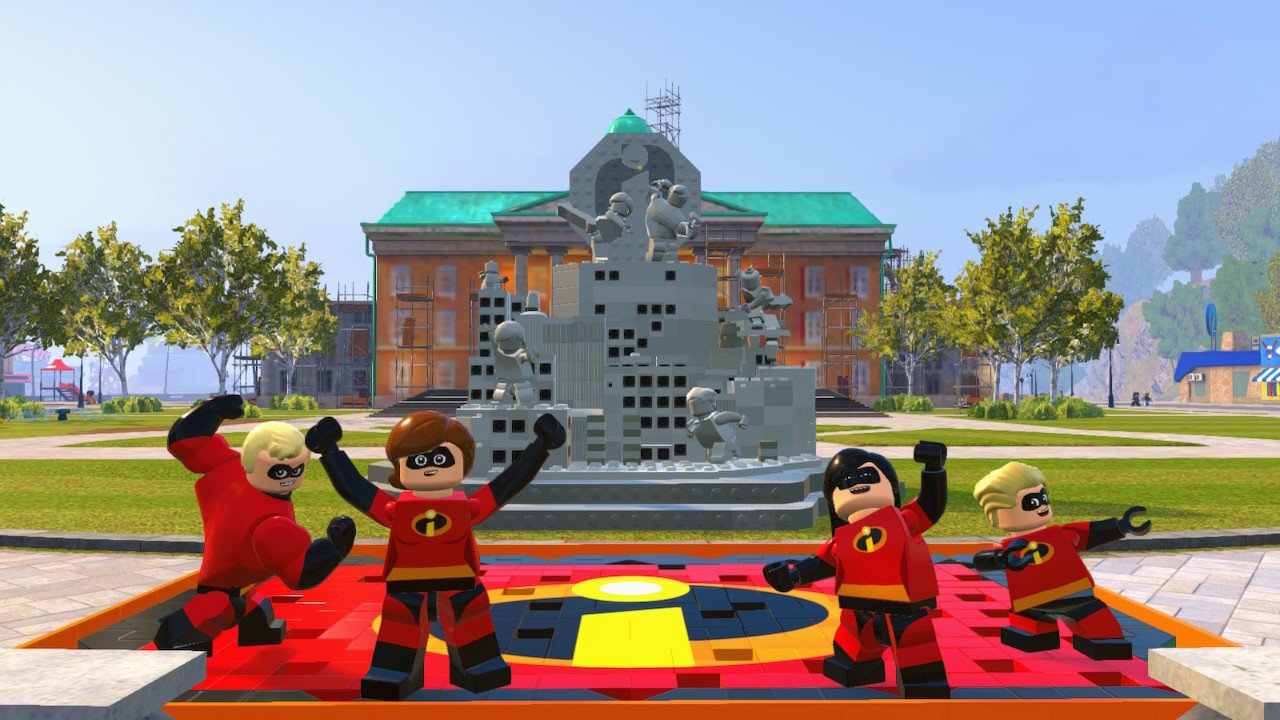 I’ll do my best not to spoil anything for those who haven’t seen the new Incredibles movie, but you’ve had 14 years to watch the first one so if you haven’t yet and keep reading, that’s on you. The game begins right where the new film does, directly after the events of the first movie. I thought this was a mistake at first, and restarted my game to see if I had misclicked something, selecting the second movie by accident. But no, you have to play through the second Incredibles movie to unlock the first. It’s a questionable design decision, and the chronology of the film universe means this decision robs many of the first movie’s plot points of their impact.

As an example, baby Jack-Jack spends a large percentage of the first movie as a normal toddler, and it isn’t until the end of the story when the audience realizes he has superpowers (and quite a few, at that). One of the new film’s plot lines explores how the rest of the family deals with this realization. Jack-Jack is a playable character in several scenes from the second movie, so the reveal at the end of the first movie’s story mode means nothing. It’s not a shock to the player that Jack-Jack has powers when they’ve been actively turning him into a fireball or a demon for the last few hours. It’s weird that everyone’s powers are more developed in the early game than later on, and the cool team-up abilities the kids discover on the tropical island have already been in use for several hours by the time you play this part of the movie.

Putting that aside, the game opens up after you complete the first story assignment. There’s an open-world playground to explore, and you can faff about here or return to the story mode at any time.The open world has plenty to do and collect, and it’s fun using your powers to save people, fight fires, stop robbers, and so on. Drop-in, drop-out cooperative play is enabled by default, and the Switch version lets each player take control by using a single Joy-Con. This is strictly couch co-op, and there’s no online play or additional multiplayer modes.

Co-op is one of the Lego games’ biggest selling points, and every level includes at least two characters to switch between, even when the original story doesn’t call for more than one. This necessitates some changes to the movie’s script, and creates some tonal shifts I didn’t care for.

For example, early in the first movie, Mr. Incredible tells Buddy/Incrediboy “I work alone,” and “You are not affiliated with me.” The rejection twists Buddy’s hero worship into hatred, and he eventually becomes the arch-villain Syndrome. In the game though, the pair work together willingly for an entire level to foil a bank robbery. Frankly, Incrediboy’s more useful in this stage than Mr. Incredible is. 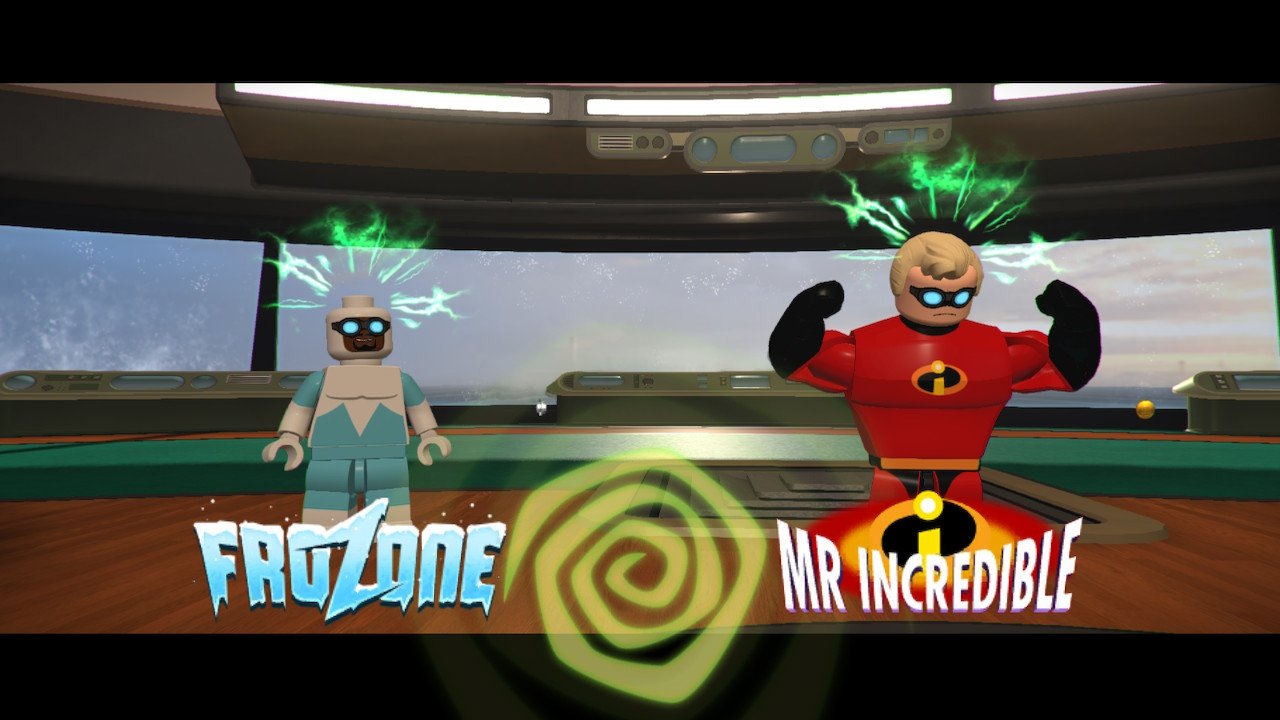 I was also somewhat bothered by the odd Bowdlerization inflicted upon the game’s script. Most references to death were removed, and the most glaring example of this comes when Mr. Incredible is infiltrating Syndrome’s island stronghold. In the movie, Mr. Incredible escapes detection by hiding behind the corpse of Gazerbeam, one of his fellow Supers from the days before vigilantism was made illegal. In the game Gazerbeam is not only alive, but joins Mr. Incredible on his infiltration mission. This is especially strange since the mission concludes as the pair manage to hack into Syndrome’s computer, finding that he’s been killing Supers using his Omnidroids in a scene lifted directly from the movie.

I can understand wanting to appeal to as large an audience as possible, but no kid who’s seen The Incredibles will be damaged by the realization that an off-screen character dies, and no kid who hasn’t will want to play Lego The Incredibles anyway. I guess I just don’t understand who this decision was meant to protect. 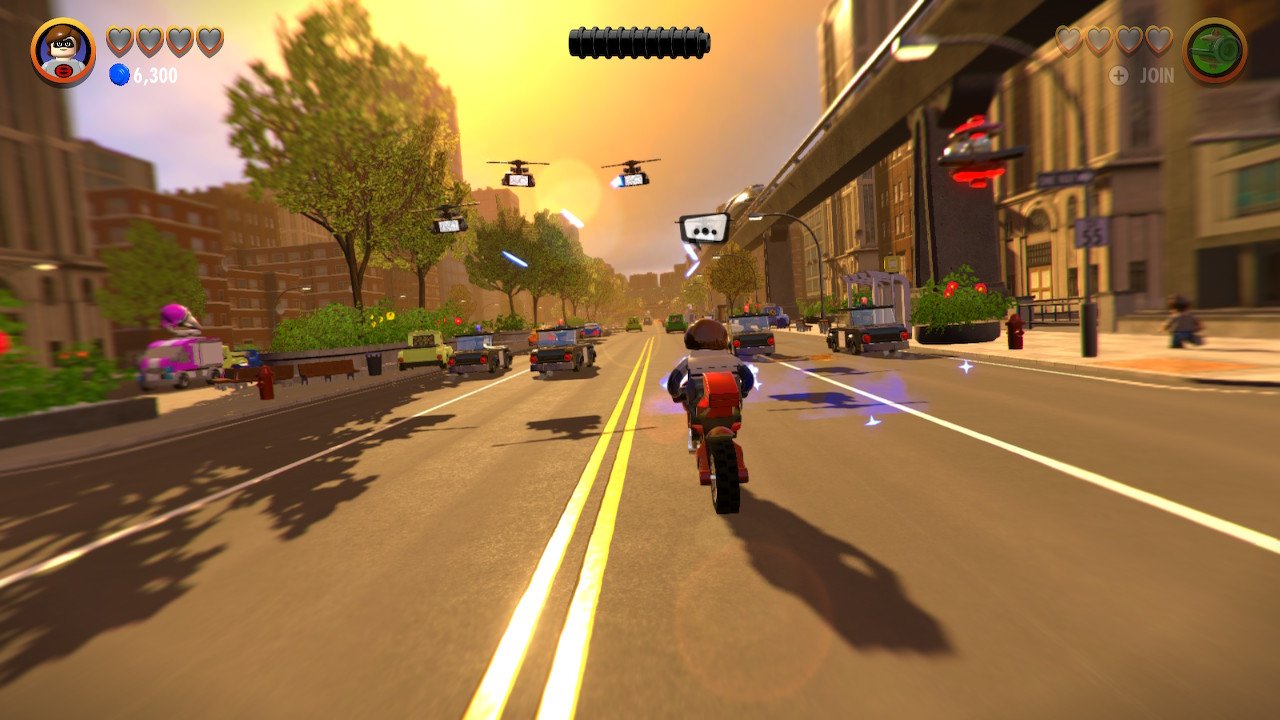 Apart from these changes the game follows the plot of both movies adequately, and the various superpowers are realized well. TT Games has been doing this for a while, and they understand how to make playable superheroes interesting and fun. Mr. Incredible has super strength and can smash through weak walls, his wife Elastigirl can stretch and transform her body into a variety of useful shapes. This is a little weird since Lego bricks aren’t known for their flexibility, but I got over it after a while. Dash is faster than any other character, and this includes both movement and his ability to build Lego constructions. Violet may be the most powerful member of the team, using her psionic blades, invisibility, and invulnerable shielding to get where others can’t. Many other characters have different abilities, and matching the correct character’s ability to the obstacle in your way makes up the bulk of the gameplay.

There are over 100 characters to unlock, and I was pleasantly surprised to find that more Pixar movies than just The Incredibles are represented. Completing a Crime Wave event in the open world gives you the opportunity to build something from one of Pixar’s other movies and unlock a character which can then be used in the open world or free play modes. You can even create your own hero by visiting Edna Mode’s house and building a new Super out of parts you’ve collected, but you’re locked into specific characters in the story mode until you’ve completed each mission at least once. 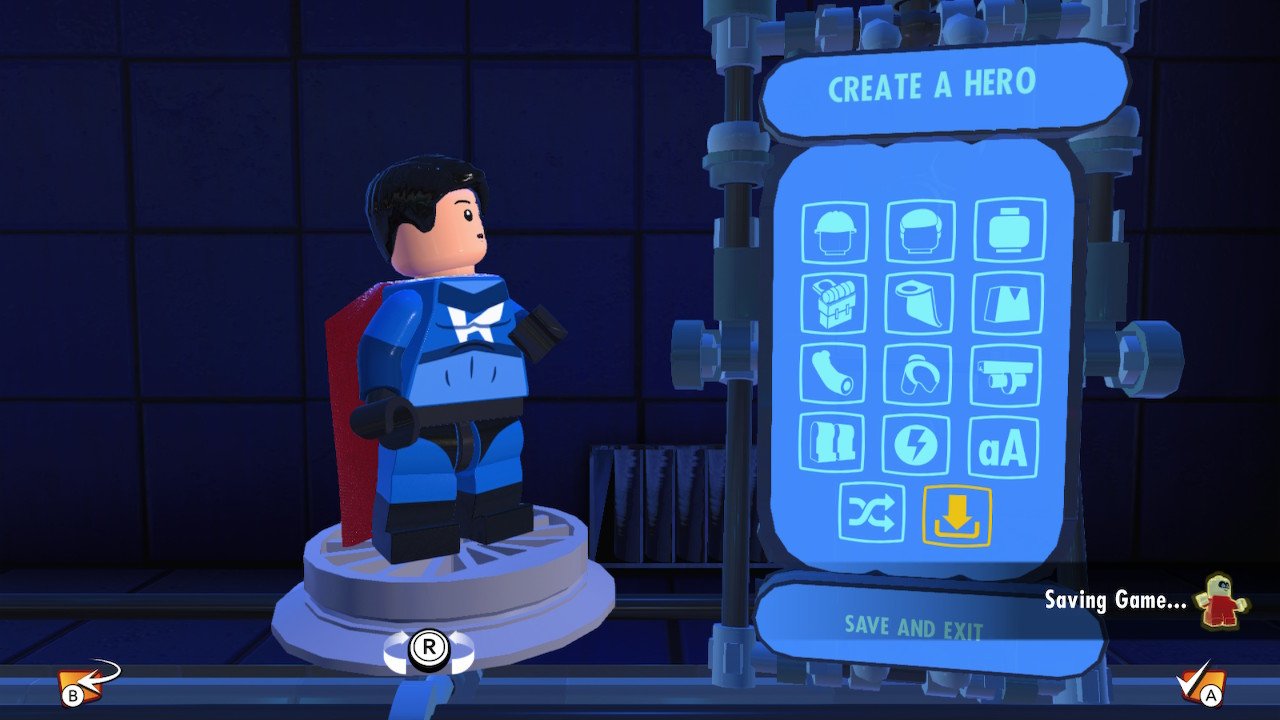 Characters from the Incredibles movies can also be unlocked by exploring the open world or by playing through story missions. This includes heroes and villains, some of which were only a passing reference in the dialogue of one of the movies. Some of these are a bit of a reach; it’s unlikely anyone will want to play as the kid in the driveway who watches Mr. Incredible blow his cover, or the old woman he helps get a cat out of a tree. It’s also a bit of a cheat to call every costume variant a different character since their powers remain the same. Still, it’s fun to play as some of the new heroes like Voyd and Brick, or try out heroes and villains from the old days like Thunderhead and Bomb Voyage. There are even original creations, and clearing Crime Waves will pit you against new antagonists like the sea-themed Anchorman or ice cream villainess Brainfreezer.

You’ll unlock lots of other characters including several other Supers, but the Parr family are still very useful due to their unique ability to team up with other characters. Mr. Incredible can throw fellow heroes to reach greater heights, Violet can share her psionic shield to help others past laser grids or toxic waste, and Elastigirl can become a bridge, boat, ladder, slingshot, or other items depending on what’s called for. Unfortunately, this versatility doesn’t encourage creative thinking, and there’s only ever one “right” way to solve a given puzzle. 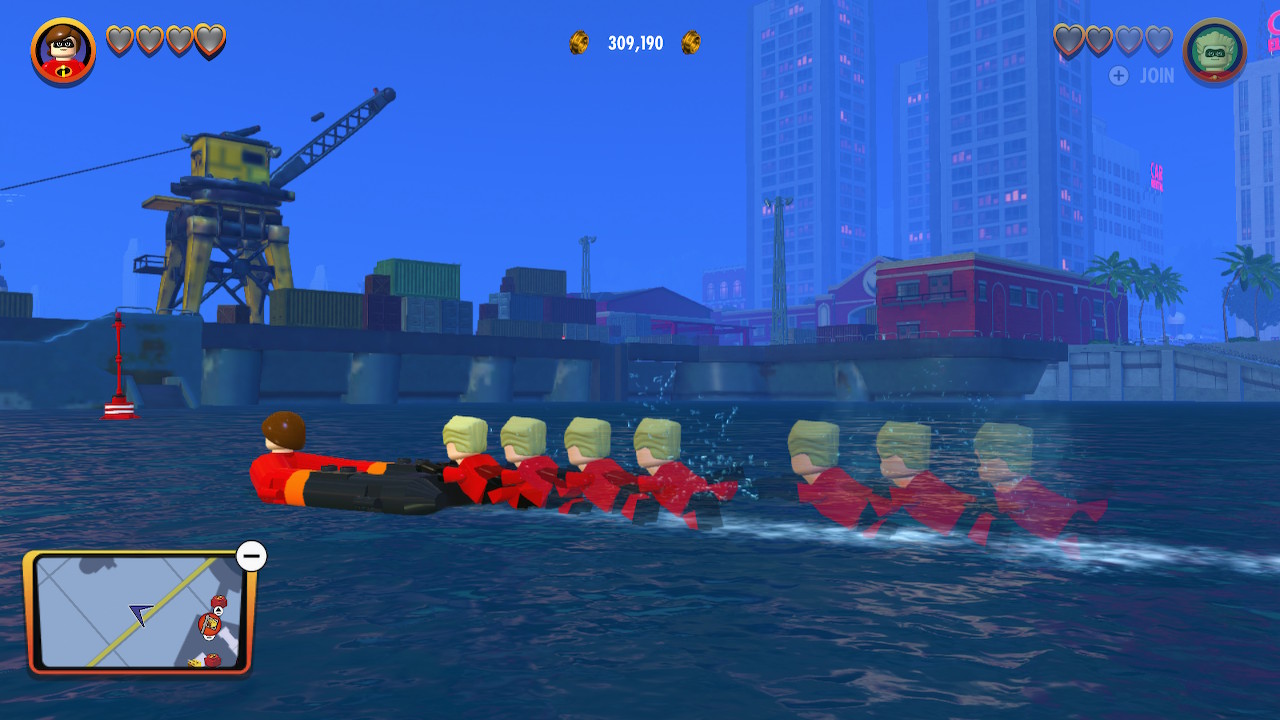 The audio in the game is quite good. Michael Giacchino’s bombastic ’60s inspired score is intact, and that counts for a lot. The full voice acting is also better than I was expecting. It says something to me that director Brad Bird was willing to put his voice behind Edna for this game version of his movies. Most characters are voiced by their original voice actor, but TT hired high-quality soundalikes when this wasn’t possible. Woody isn’t voiced by Tom Hanks for example, but his brother Jim does an adequate impression.

It seems as though the game is meant only for fans of the movies. That’s fine, but some of the puzzles amount to nothing more than acting out a scene from the film, and if the player is unfamiliar with the scene I could easily see kids getting stuck. I would have had no idea what to do in one of Jack-Jack’s sections if I hadn’t seen Incredibles 2 before playing, though there is a hint system in place.

I never ran into anything game-breaking, but there were some glitchy annoyances that cleared up when I started a new story mission or reset the game. These almost always occurred in the open world section. The most annoying was when the game decided I couldn’t switch between my two active characters, locking out the second one and forcing me to do everything with the first playable character. I also ran into a strange error in the open world where piles of bricks that could be rebuilt would remain on the ground even after I’d interacted with them. 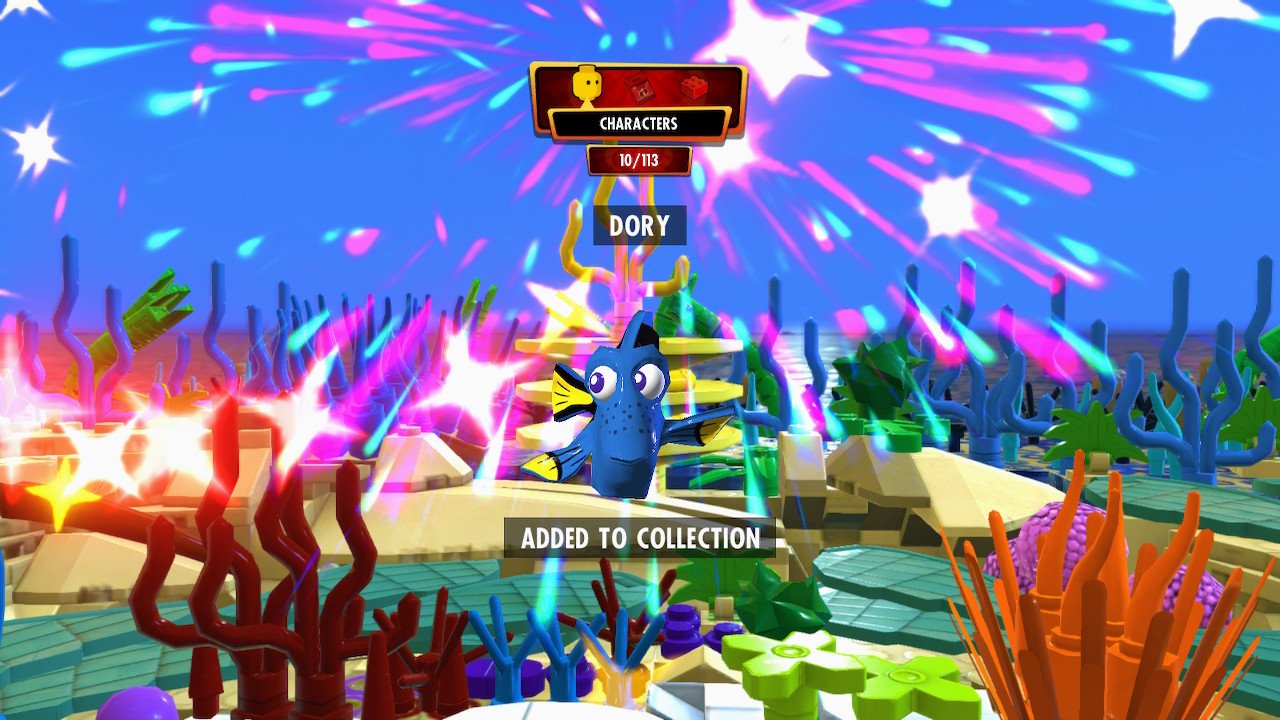 There were some graphic and control glitches as well. Pop-in is pretty common, though it may be less frequent on more powerful hardware. And context-sensitive button prompts are fine when they work, but can be frustrating when they don’t. I can’t tell you how many times I went to build something as Elastigirl and ended up transforming her into a hippity-hop instead. Camera weirdness, useless A.I. helpers, and forced-perspective jumping challenges all return, and they’ll get you killed much more frequently than the milquetoast goons on the city streets. The controls for Lego games could stand an overhaul, and just as Chris said in his review of Lego Marvel Super Heroes 2, it’s disappointing to see such nice presentation hampered by the flaws in the Lego engine.

I enjoyed playing through the game, but felt some of the questionable decisions and creaking technology kept it from achieving its potential. It’s quite good for a licensed product, and can be fun for a couple of kids to play together, or for a parent to play with their child. It just isn’t anything special, and in a game all about being Incredible, that’s kind of a letdown.