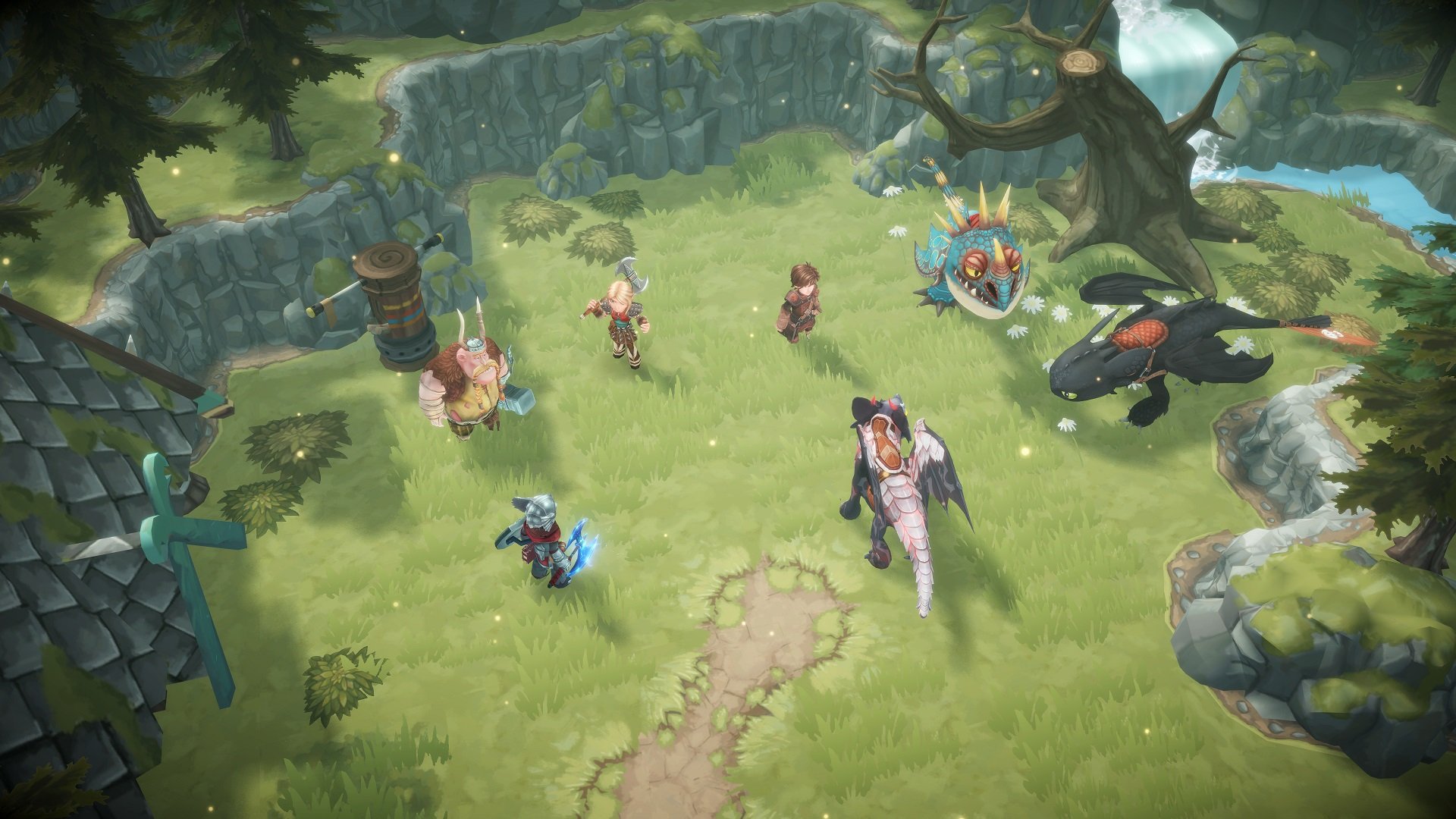 I just watched the dragon movies so I’m gonna review the dragon game.

Despite launching near How to Train Your Dragon: Hidden World, Dawn of New Riders is not quite a tie-in to the third film. Rather, it’s a side narrative that takes place between the second and third movies. This isn’t Hiccup’s story to tell.

Dawn of New Riders features a, well, new rider. The protagonist is an amnesiac named Scribbler. He’s suddenly on a ruined dragon sanctuary with no recollection of his past, his purpose, or even his name. He forms an immediate bond with a dragon named Patch, who’s a rare sort of hybrid beast that can acquire different types of powers.

At first, Dawn of New Riders revels in its fan service. Hiccup and Toothless make appearances. So do Astrid and Stormfly. There are nods and references to the movie material — the real reason anyone’s here in the first place.

Before long, it finds its own identity. Dawn of New Riders settles into a comfortable pace of linear island exploration that gives way to lite Zelda-like lairs. There’s a story about order and freedom, as a scientist is ruling dragons through a form of mind control. Also, Patch is rapidly aging and Scribbler is terrified of losing him. Dawn of New Riders doesn’t use the established parts of How to Train Your Dragon as a crutch as often as you’d expect.

Patch’s chimera-like DNA is the driving force behind most of the mechanics. Over time, Patch learns different elemental attacks: ice, electric, and fire. Although most of Dawn of New Riders‘ puzzles are built around block sliding or switch flipping, there’s usually an elemental component to consider. It’s mostly elementary and not too tasking, but the puzzles never really wear out their welcome.

Combat, on the other hand, grows tiresome. There’s a Diablo-like quality to fighting, hacking and slashing away at enemies until they’re defeated. But it’s too stiff and janky. The attacks have a long animation window during which an enemy can interrupt and deal damage. Patch can fire off ranged attacks but they aren’t too effective. (Scribbler and Patch can both be controlled, switching between them with a single button press.) Dawn of New Riders doesn’t have many combat sections, but these encounters are the most onerous in the game.

One of How to Train Your Dragon‘s strongest themes is sacrifice. (SPOILERS FOR THE FIRST TWO FILMS:) In the original, Hiccup lost a foot saving Berk. In the sequel, Stoick sacrificed his life to save Hiccup. (/SPOILERS) Dawn of New Riders half-commits to the idea of sacrifice in a semi-meaningful way. Any real weight vanishes thanks to feel-good deus ex machina. Most of the narrative wraps up without addressing any of the conflict Scribbler and Patch were trying to solve.

Still, DreamWorks Dragons: Dawn of New Riders is the rare movie tie-in that doesn’t flagrantly lean into a reliving of the film. Dawn of New Riders tries to do something else entirely, and that’s admirable in its own way. There’s a decent time to be had — especially for youngsters — and its flaws and shortcomings don’t grate too much, thanks largely to a relatively short runtime. But, because it forges its own path, Dawn of New Riders won’t make a lasting impression on the How to Train Your Dragon canon.