As it turns out, running right and shooting dudes is still pretty fun. Many classic arcade shooters have aged incredibly well due to their addictive jump-shoot-dodge cycle complemented by varied level, enemy, and boss design. There are few modern games that can stand beside those classics.

These days the genre is used for flawed experiments, genre mashing, and ‘80s arcade tributes. Yet, Intrusion 2 is none of these things. It is a meeting point between old game design and new, with every other moment punctuated with some of the most thrilling level and boss design to grace the genre.

As improbable as it may sound, this game made by one guy not only stands up to the classics, it is every bit as good as Gunstar Heroes and Contra.

Intrusion 2 is the sequel to a 2008 Flash game. Its sole developer, Aleksey Abramenko, worked on the game for three years, spending upwards of five months on the final boss alone. The effort shows. What doesn’t show is that this is a solo effort with only music being handled by someone else. The graphics, design, and presentation are great, if not better than much of what you’ll find on Xbox Live Arcade.

There is a certain control scheme that I love but has, for whatever reason, been unpopular throughout the years. Abuse had it. The Showdown Effect will have it.  Intrusion 2 has it and the game makes a perfect case for why fluid, non-restrictive mouse/thumbstick-controlled aiming is so much better. Instead of shooting diagonally, awkwardly trying to position yourself in the right area to hit the enemy, you can jump up and accurately aim. It gives the player so much more freedom in action and helps make Intrusion 2 a fluid and fun shooter from beginning to end. 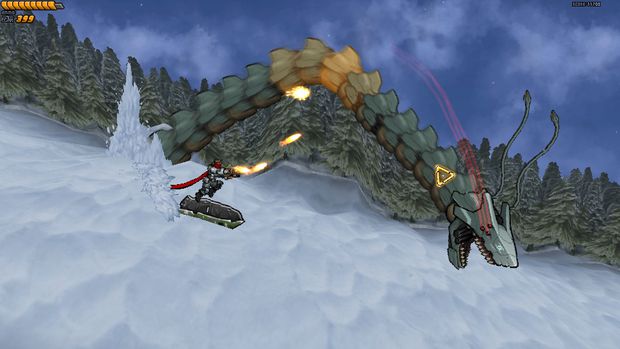 Intrusion was pretty good for a Flash game, but the additions and refinement that this sequel brings makes the original completely irrelevant. The controls are now pitch perfect, the levels are colorful and varied, and the game, as brief as it is, is packed full of memorable moments. One stage starts with a giant robot breaking the bridge that you are standing on, sending you cascading down a cliff side while you return fire, and it ends with you surfing on a metallic plate from the robot, gunning down parachuting enemies and missiles while you narrowly escape an avalanche. This is the sort of over the top action we rarely see in games these days, outside scripted, non-interactive moments in first-person shooters.

The game isn’t always showboating, however. Even the nuances of its the combat make it a better shooter than Contra and Gunstar Heroes. You have five weapons, pistol (which you can dual wield), machine gun, a rail gun that goes through walls, a plasma rifle, and a grenade launcher. Other than the pistol, each weapon will be used frequently throughout the game and has its own unique advantages in combat. The game could use a melee attack and shotgun, but their absence isn’t a problem, especially when you have mechs and wolves.

Throughout the game’s six levels you’ll come across Metal Slug-esque animals and vehicles that can help you put the hurt on enemies. The introductory wolves are goofy as all hell, with their paws swinging every which way from the wonky physics but they can do massive damage when you jump onto an enemy. They can also crawl up walls and take great leaps. The mechs, however, are much better designed and fun to control. These come in three varieties: rifle, sword, and harpoon. 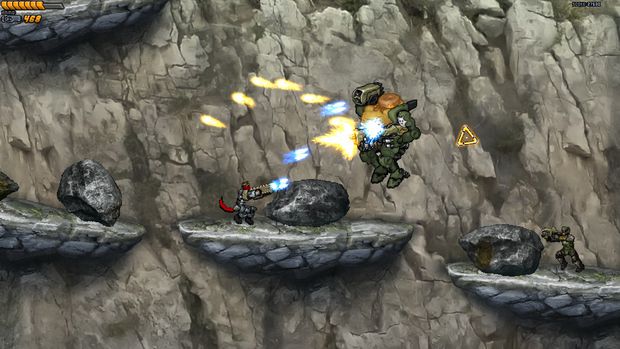 The rifle mech has a heat-seeking missile and you can use its rifle as a weapon once the mech is destroyed. The sword mech is slow on the draw but can do a lot of damage. Boosting into enemies and timing your swing just right never gets old. My favorite is the harpoon mech which has a bionic arm that can grapple to anything. You can grapple enemies, bring them toward you, and shoot them off into the sky. You can also swing around the environment with it. These moments add some nice variety to this otherwise standard run-and-gun shooter.

Intrusion 2’s boss encounters are awe-inspiring. They provide a great challenge and some refreshingly original design choices. Each boss has several attack phases that change the dynamics of the encounter. Enough can’t be said about the final boss that will go down as one of the greatest boss encounters of all time. One minute you are dodging bullets in an enclosed corridor, the next you are trying to escape a building that is being rotated in the boss’ hands, and then you need to dodge an onslaught of missiles while you take shots at it from below. Each boss fight in the game is intense and peppered with checkpoints, but the final boss sends Intrusion 2 off on a high note.

In addition to mouse-aim, another old favorite of mine is wonky physics. Before developers started implementing realistic physics, we had games like Max Payne 2 where bodies would go flying and contort in ridiculous ways. Sure, it’s goofy, but there is a certain charm to it. Intrusion 2 is no different. The game is full of crates, bodies, and other objects that go flying across the screen in ridiculous ways. Unlike Max Payne 2, the physics tie into the combat and make for some interesting encounters. 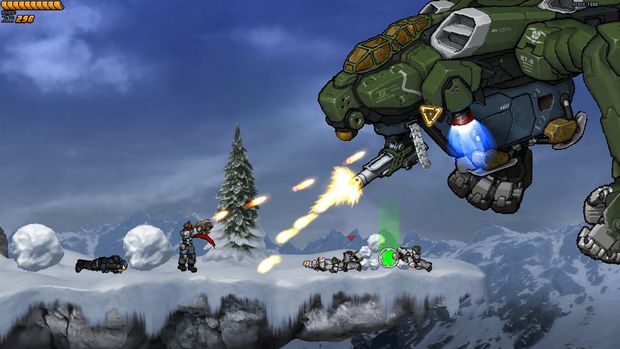 You’ll frequently use boxes and boulders for cover and even crush enemies with them. When you are up against the Crysis– esque cybernetic squids or mechs, it helps to slow them down with debris. Some hilarious emergent situations can come about through the physics. I once trapped a squid in a narrow cargo unit, making a difficult encounter pretty easy. Another time, I some how was able to surf the skies on the squid’s tentacles while I fired my gun down at my feet. Gunning down all the enemies in a corner and walking on the hill of their dead bodies is a morbid pleasure in Intrusion 2.

The game also has a couple physics puzzles that alter the pace. These vary from shooting down a guard tower to knocking boxes off a platform. It’s not exactly Half-Life 2 but that’s a good thing given the breakneck pace of the action. There is a fair amount of strategy in combat, as well. You can split a log with your gunfire, set a propane tank on fire (shoot it more for an explosion), and roll boulders onto enemies. The ragdoll physics and object collision might not be to everyone’s taste, but it’s an intentional decision that increased the enjoyment very much for me. Nowhere is this more true than the jetpack enemies that keep aimlessly flying after they are killed. It’s so dumb … but awesome.

As far as complaints go: Intrusion 2 is short, its hard mode isn’t all that difficult, and the game’s music is incredibly repetitive. Other than that, it’s hard to fault the game. Much praise has been given to Dyad and Fez recently for being smart, imaginative games developed by modestly sized teams, but we rarely see traditional action games by indies stand up alongside the classics of the genre. Most indies aren’t brave enough to even attempt it, so they make an unorthodox genre-bender of a game. Intrusion 2 is proof that it can be done. This is some of the most fun I’ve had with a game so far this year, and it will go down as one of the best side-scrolling shooters of all time.

[Intrusion 2 is available for purchase at the developer’s website and will be on Steam by the end of next month.]