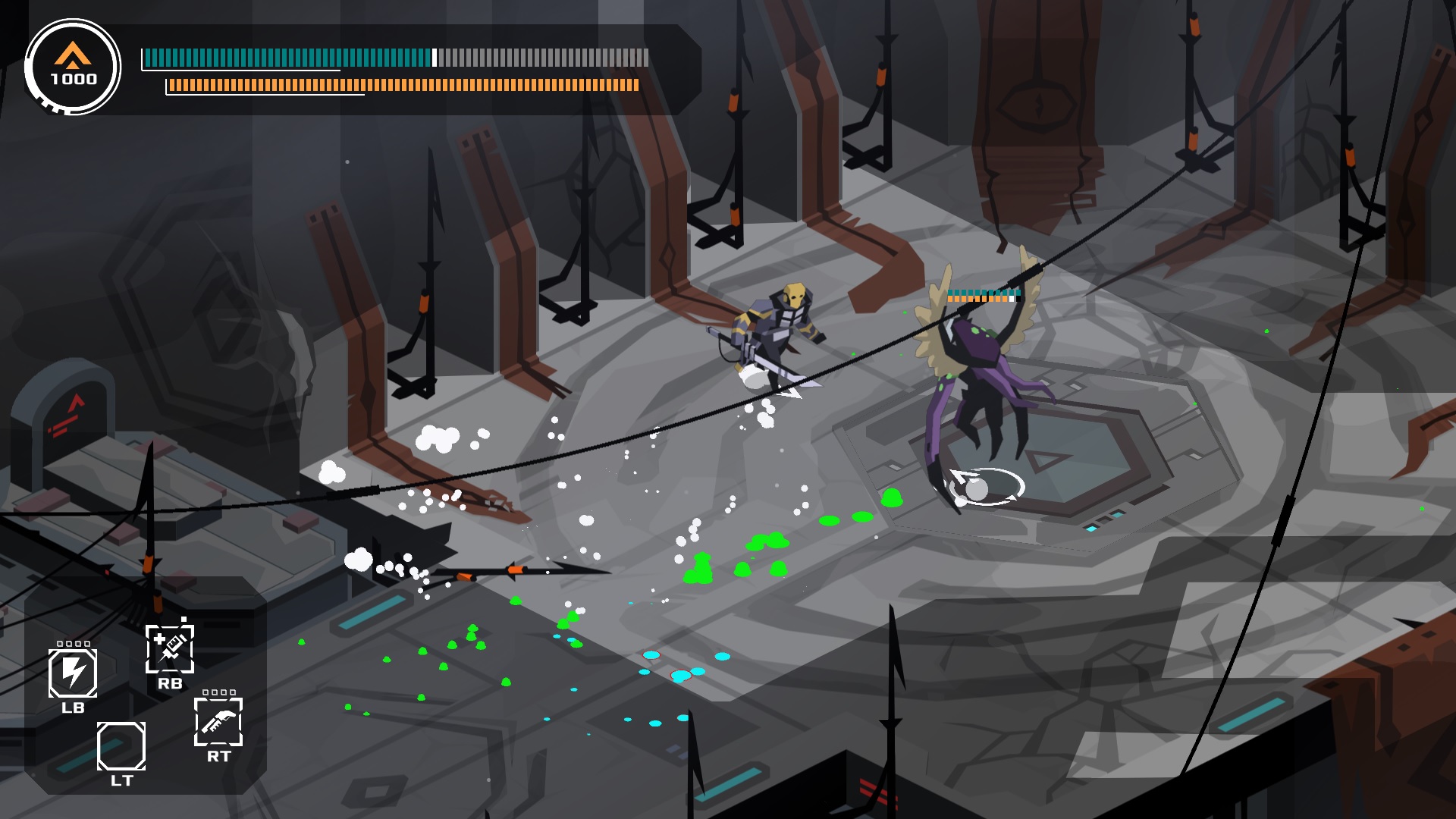 It has become something of a joke online to compare things to Dark Souls. When writing a review, most writers will opt to reference something popular to cut down on the length of a piece. This is supposed to work in that readers will be familiar and can draw parallels without explicitly being told how something is similar.

What has happened, though, is that reviewers have gotten lazy and started referring to anything “hard” as Dark Souls. This came to a head when a review for the Crash Bandicoot N. Sane Trilogy claimed the game turned into Dark Souls due to its difficulty. What does one say, though, when a game directly bills itself as a riff on Dark Souls? Immortal Planet is one such game and I’m kind of at a loss for comparisons.

Would it be tacky to say Immortal Planet is the Dark Souls of isometric RPGs? 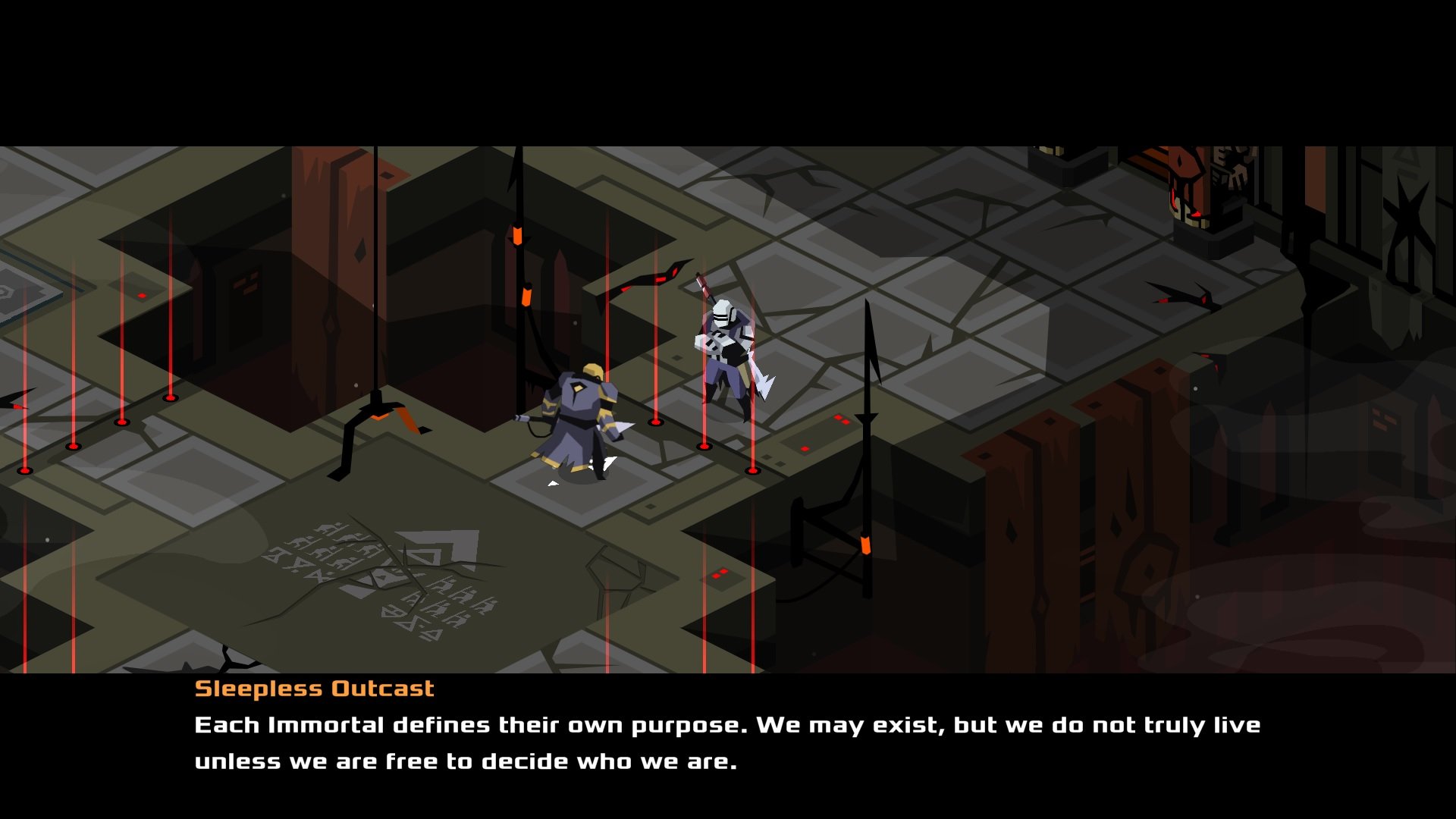 Taking a page right out of the Souls playbook, Immortal Planet begins with a quick cutscene that vaguely sets the stage before directly thrusting you into the action. After that, you’re left to scramble together pieces of the narrative at your own discretion. There are a few NPCs that will explain little bits and pieces, but this is pretty much an experience centered on the gameplay and level design.

The game starts by having you select from three different weapons and three different special abilities. While this is supposed to give you slightly different playstyles to mix up the combat, everything basically feels the same. You can also eventually find the other starting weapons and attributes, so this is really just a way to acclimate yourself in the beginning with limited assistance.

After “creating” your character, you awaken from a stasis pod and immediately face off with an enemy. There are small little beacons on the floor that will pop up what each button on the controller does, but this really is just Dark Souls in 2D, isometric form. You have access to a basic attack, a block, a dash, a sprint and the ability to change the form of your weapon, but all of these actions will consume part of your stamina meter. Stamina will recharge when you’re not actively performing anything beyond walking.

There are also sub-weapons and items available for you to use, which are displayed at the bottom left of the screen. These are mapped to the triggers/bumpers on your controller and allow you to shoot guns, throw grenades and perform spells/magic to attack from a distance. Then there is the healing vial, which has a limit to how many times it can be performed until you find items to increase said limit (think the Estus Flask from Souls).

The big “twist” on the Souls gameplay in Immortal Planet is that you can see the enemy health and stamina meters at all times. They are governed by the same ruleset that you are, so the combat becomes tactical in that you can coax enemies into performing actions that will leave them at low stamina and vulnerable to counterattack. Most of these enemies hit like freight trains, too, so you’ll really want to learn their patterns and when to retaliate if you hope to make it to the first boss fight.

Enemies follow classic villain designs by telegraphing their attacks and having clear patterns for you to exploit. It is all tried and true stuff that Souls perfected through its various iterations, so fans of that series won’t find much to stumble about here. For anyone completely new, this will come off as sometimes punishing, but always rewarding and an experience that emphasizes raw skill more than anything else.

The boss fights also follow the same mold, though they typically have multiple health meters and various stages to their patterns. The first beast you’ll face off with is mainly a giant form of the enemies in the first area, but the bosses do become more varied as you progress along, utilizing ranged or area-of-effect attacks to keep you moving. They complement the areas you’ll traverse to reach them, in terms of design, which is nice.

There are four main areas to the game, though upon defeating the boss, you’ll unlock the second half of each area for further exploration. The reason behind this concerns something from the plot about everyone on this unnamed planet being immortal, so they get reincarnated or something. I’m not really sure what the whole deal is, but it highlights one of my biggest problems with the game. 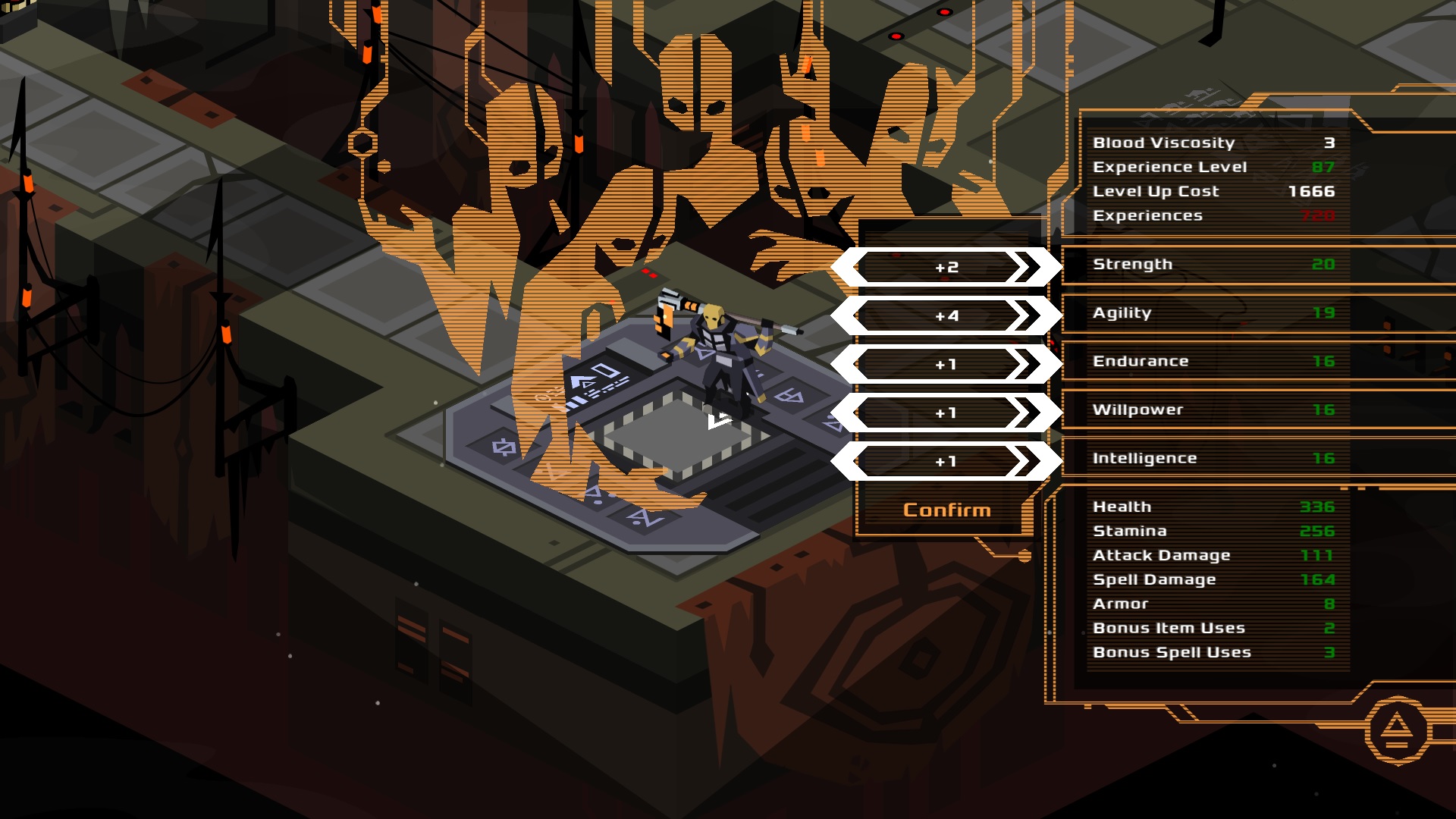 Immortal Planet is a short game, clocking in at roughly six hours for a playthrough. It feels like a condensed version of Dark Souls for people with tight time constraints. That is fine and all, but you’d think that short length would facilitate enough new ideas floating around to make every encounter wholly unique. Instead, the game forces you to basically repeat everything you’ve just done in each second half of an area. This also includes facing off against the same boss, even if they are slightly more difficult.

It also brings about how pointless the leveling system is, since the required experience to level up is fairly low. Sure, dying will see you drop your XP at your point of death and task you with retrieving it while a second death will erase that XP (exactly like Souls), but simple enemies drop a lot of experience and you can quickly amass a considerable amount of strength and endurance to really cheese out any troublesome spots.

The level design is also quite generous with shortcuts and interconnectivity, so you can find some great farming spots to kill five or six foes, die and then repeat the process for quick XP boosts. Since it is never quite clear which area you’ll need to head to first (mostly because you’re free to choose), you might stumble into the “later” section and feel completely underpowered. Since the enemies aren’t impossible, just mostly a pain, you inevitably end up cheesing the system to bring yourself up to snuff. This, in turn, ruins the earlier segments because the enemies are just no match for you. 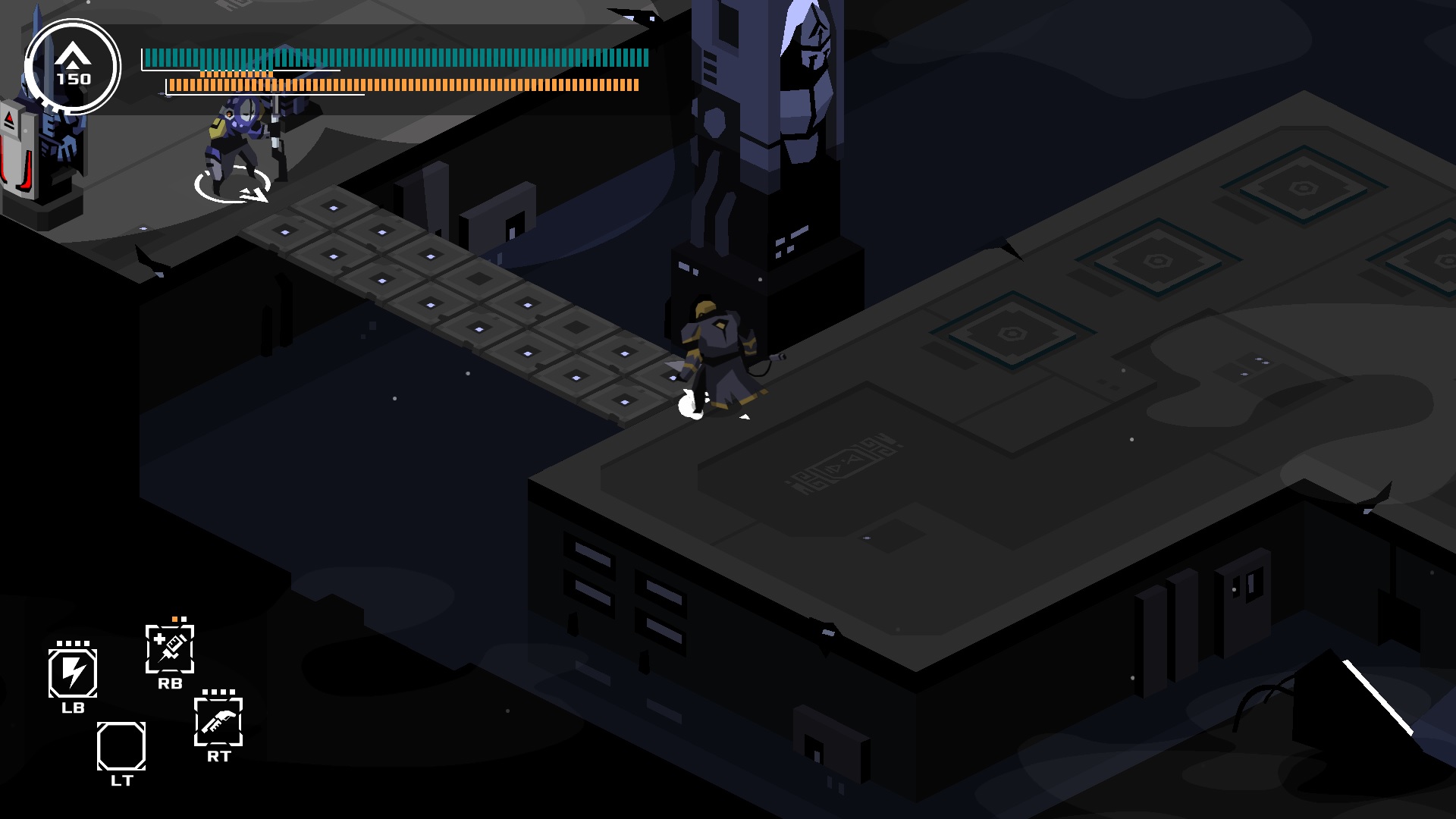 That could all be forgiven if there was something to actually find in this world, but Immortal Planet then forgets to include any secrets or extra loot. There are a few different weapons to track down (the aforementioned trio of starter choices being available in the world), but they all basically control the same and don’t utilize any different kind of animations. There is not a single bit of armor for you to get, so you’re stuck with the default look for the entire duration.

So whatever, the ranged attacks and level progression are kind of borked, but the core combat remains just as tight as Dark Souls, right? Well, not exactly. The isometric viewpoint that the game employs really hinders your movement quite a bit. While you technically have access to 3D movement, since the camera is always fixed in one direction, dodging around enemies can be tough. Sometimes you’ll run straight into them, which stuns you if they aren’t low on stamina.

When you’re stunned in place, you tend to sit there like a dumbass and just absorb damage. This also happens when enemies peg you with secondary weapons, which in turn almost always spells your untimely death. It doesn’t help that you can dash right off of platforms, which become hard to see due to the isometric viewpoint. There were a few instances where I was trying to simply dodge an attack and I’d immediately die because I stupidly went right off the environment.

There are also a few platforming segments that task you with dashing over gaps, but not lining yourself up perfectly will result in the same situation. While the majority of these are relegated to “challenge” rooms that unlock some extra abilities, there is one segment where you’ll need to diagonally dash onto an invisible platform that is underneath an acid drip. Trying to quickly perform all these tasks when you can’t clearly center yourself is just an exercise in frustration. 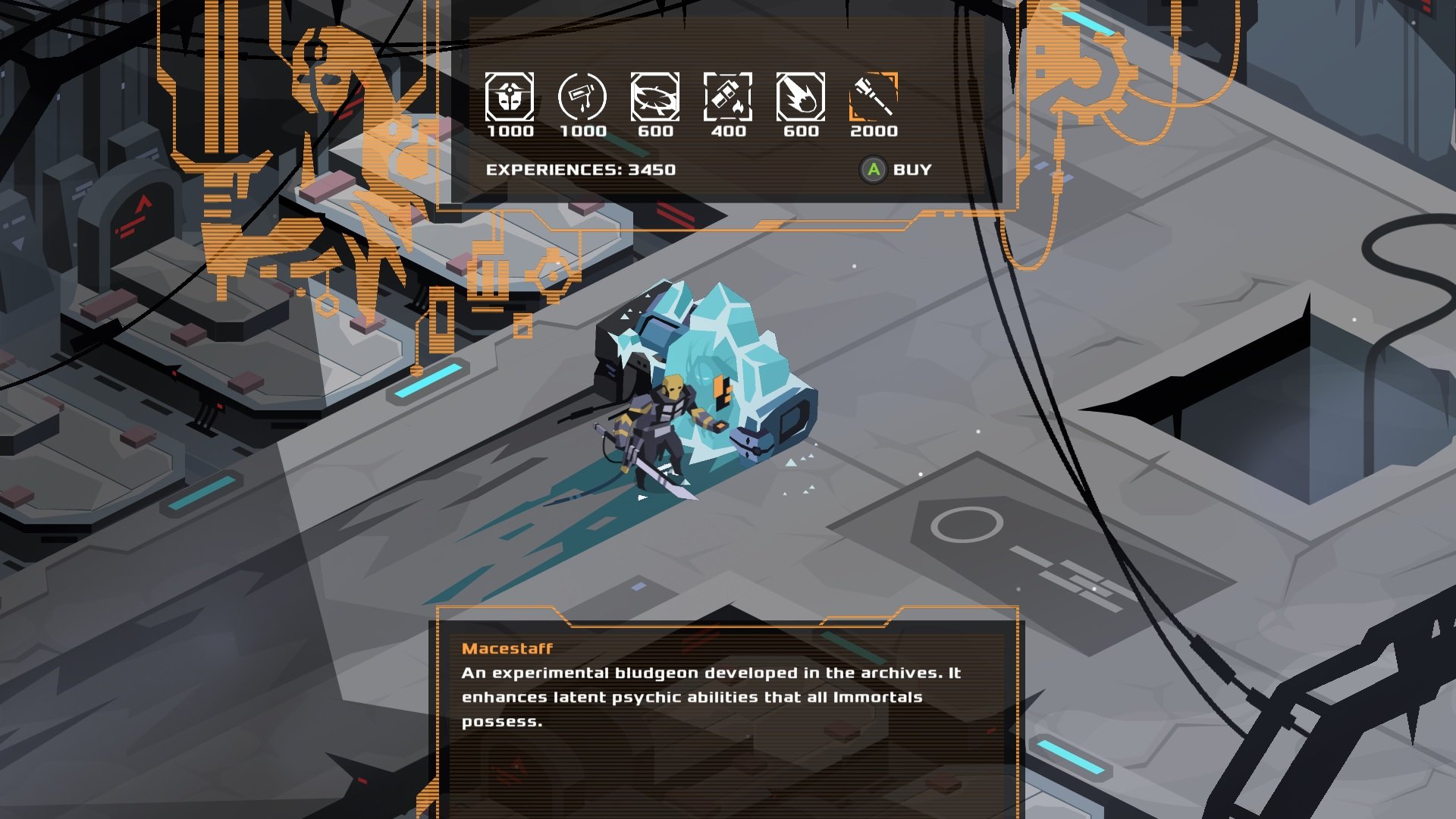 When the game pits you into larger arenas and stops with funky platforming, it does perform solidly enough. I don’t think the short length does anything positive for the mystery of this world, but that same stamina focused combat from Dark Souls is put to decent use. That sci-fi aesthetic is also neat, since it feels somewhat different from Souls‘ more medieval designs. The majority of the game is like this, so it has enough fun moments to feel rewarding enough.

The “New Game Plus” mode (called Nightmare, for some reason) is also really cool in that it slightly remixes the enemy and hazard placements, so it isn’t just a carbon copy of what you’ve already beaten with a “harder” edge. I’m not sure I understand why you start from square one with your XP, but you then have access to all of the weapons the game has from the start (should you find them).

You also feel a tangible progression in your skill, since restarting after having tinkered with the game for a few hours resulted in me better understanding the specific quirks of Immortal Planet’s animations and gameplay. Sadly, I can’t see myself actually wanting to finish this game again, which is a shame since the “real” ending is hidden behind “New Game Plus.”

Really, Immortal Planet is mostly a game for Souls fans that just cannot get enough of FromSoftware’s particular brand of action. While it could also work as an introduction to the series proper, what with its short length, Immortal Planet doesn’t bring enough new to the table to really justify a purchase for anyone not already familiar with the Souls series. That it starts to recycle content in such a short time frame is also a crime, even if the combat can be engaging.