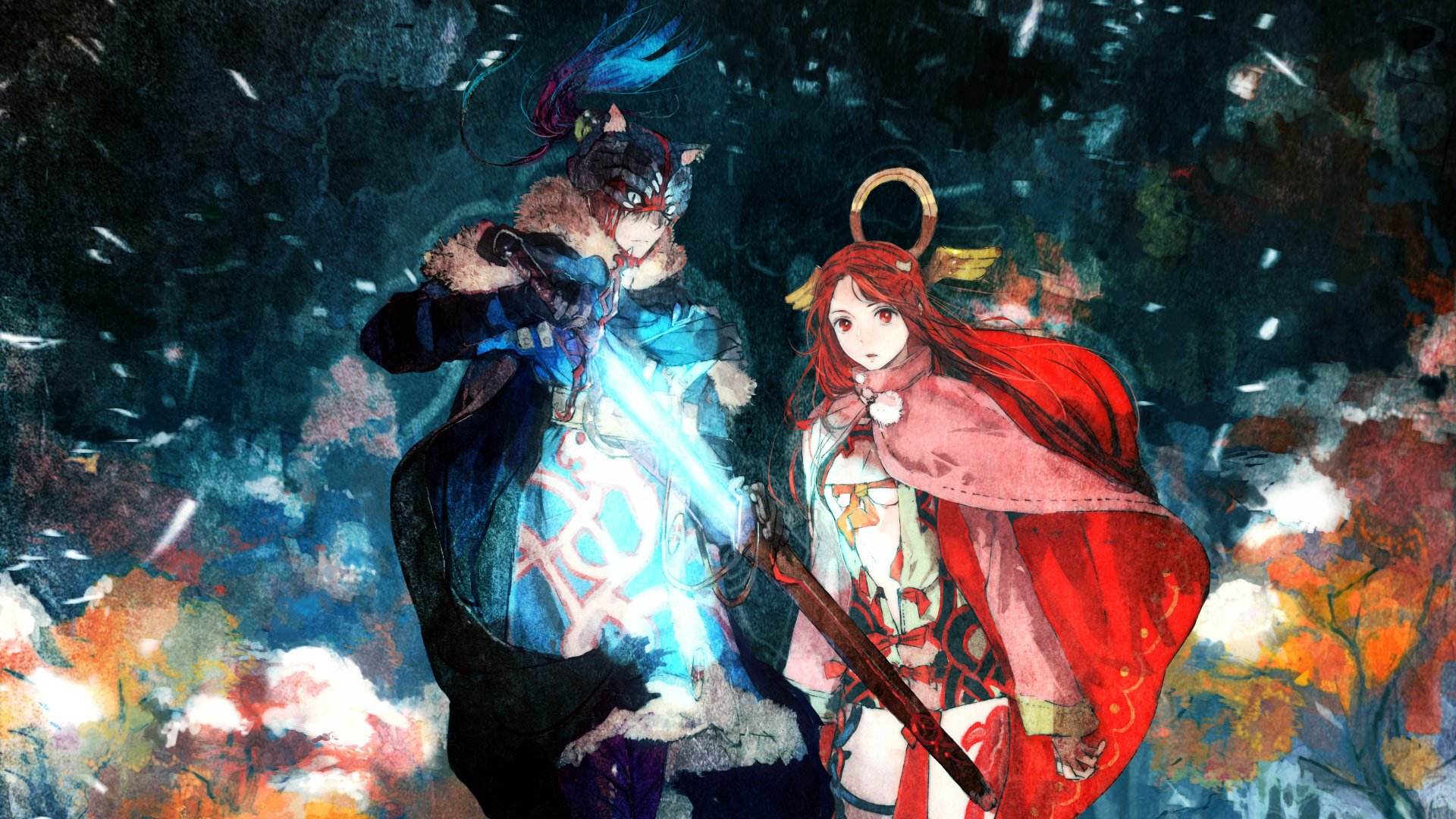 ‘Yes, I’m the real Setsuna. All you other Setsunas are just imitating.’

Last year, we saw the release of I Am Setsuna for the PlayStation 4 and PC. Much like one of Square Enix’s other recent role-playing games, Bravely Default, it was an attempt by the publisher to provide an experience somewhat reminiscent of an old-school JRPG from a previous era in gaming.

Considering its recent re-release on the Nintendo Switch, this seemed like as good of an opportunity as ever to revisit this modern take on a classic genre. After all, unless we suddenly enter a hypothetical perfect timeline where not only does the Switch have Virtual Console support, but where Square Enix has also released its back catalogue of role-playing games on the platform, this is the closest thing we’ve got to such titles on Nintendo’s new console. 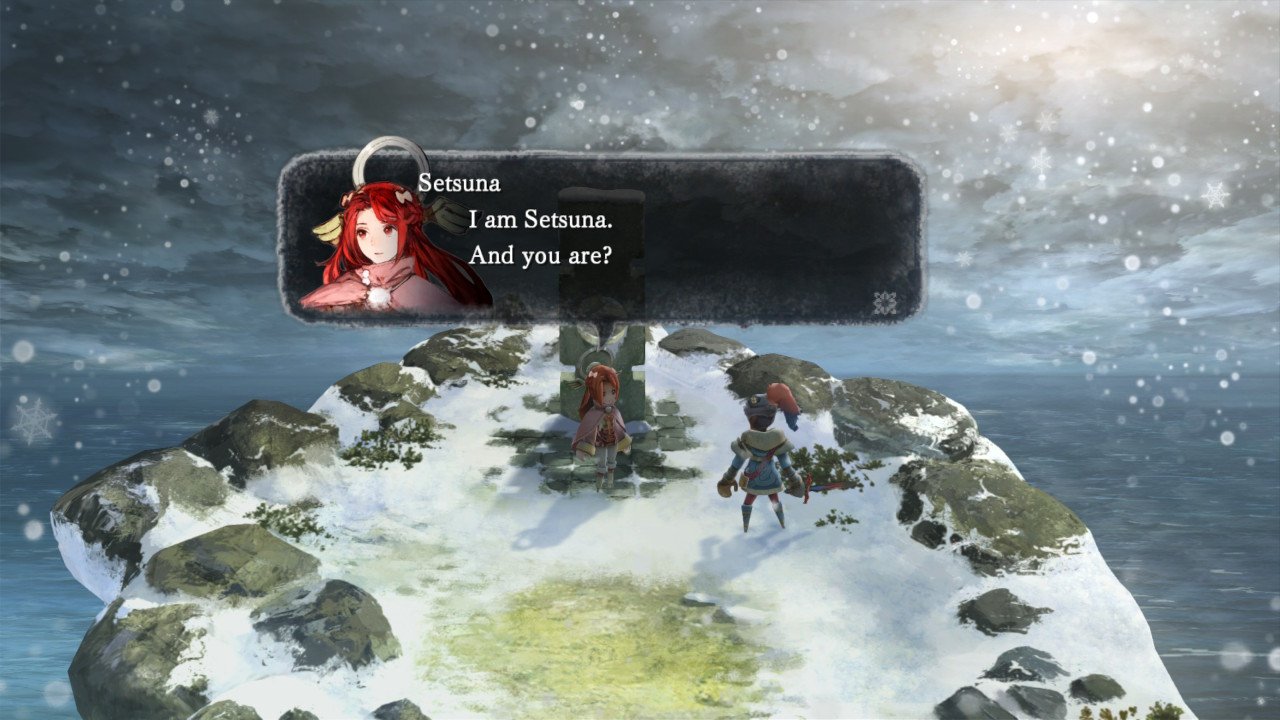 I Am Setsuna‘s story starts off in an interesting way. Endir, a mercenary who serves as the game’s main protagonist, is tasked with the assassination of a young girl by the name of Setsuna. This titular character is about to be sent off on a sacrificial pilgrimage to a location known as the Last Lands with the express purpose of somehow keeping the monsters that litter the world at bay. There is an irony to the idea of being tasked with the murder of someone who is, for all intents and purposes, destined to die anyway, and some moments of dialogue even show that this isn’t at all lost on the game’s protagonist.

Within half an hour of the game’s introduction, Endir is roped into accompanying Setsuna on her perilous journey. On their way, they meet and eventually team up with various other individuals, each with their own backgrounds and motivations.

While these characters are, for the most part, fairly archetypical, they all still manage to be enjoyable nonetheless. I just wish that they could forge their own unique identities, rather than simply being reminiscent of individuals who I’ve already grown to know and love in other games.

Setsuna, herself, is likeable enough as an example of a kind-hearted and selfless healer. Endir a textbook example of the mostly-silent protagonist, although there are a few dialogue options that occasionally pop up, even if most of them wind up being meaningless. And Kir? He certainly exists!

The only main party members whom I felt got an appropriate amount of screen time and development were Aeterna, Nidr, and Julienne. Even then, there are some character revelations and side-plots pertaining to these individuals that either don’t go anywhere, or that could have been explored in much greater detail.

Ultimately, however, the story does wind up being a wholly predictable affair. Many of the game’s light plot twists are heavily telegraphed, or are simply reminiscent of revelations that have been seen in other properties. The result is that I never once felt surprised or shocked by any of the story details in I Am Setsuna.

While I completely understand that the game was developed with the intention of providing a decidedly old-school experience, it would have been nice to see an attempt to create something that wasn’t entirely comprised of elements we’ve already seen before. To this end, I feel as if I Am Setsuna is nostalgic to a fault. I never got the impression that this game was trying to forge its own unique identity, choosing to settle for the simple mimicry of its predecessors instead. 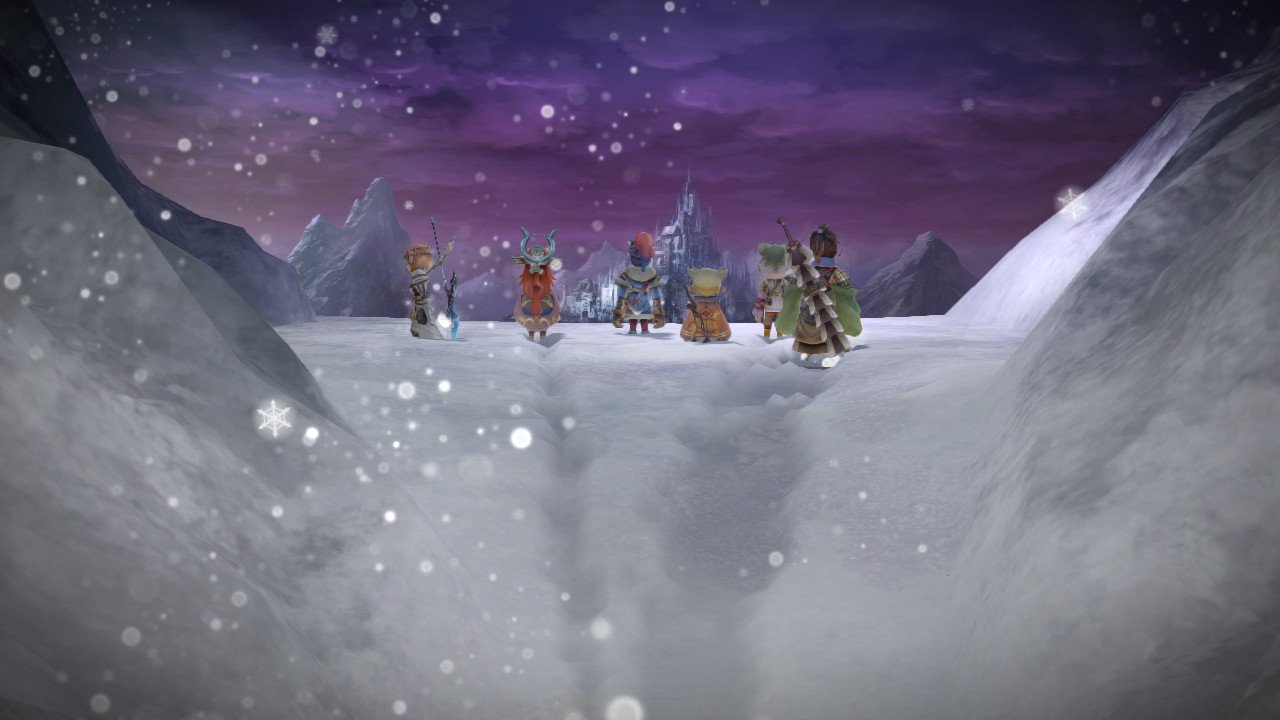 In terms of visuals, I Am Setsuna is simply gorgeous. While it may not be particularly impressive from a technical perspective — it was designed with the limitations of the PlayStation Vita in mind, after all — the game’s cold and wintery art direction manages to be aesthetically pleasing, while also doing a great job of complementing its more somber and melancholic tone.

For a game that was clearly made on a budget, there’s also a surprising amount of attention to detail, with characters leaving trails in the snow whenever they walk, as well as warm air visibly emanating from their mouths when they breathe. These effects may be relatively minor, but they do an effective job of providing the game with some sort of a basis in reality.

The soundtrack, too, is particularly noteworthy. Eschewing the orchestral compositions that pervade many other titles in its genre, I Am Setsuna instead opts to deliver a far moodier piano-based score. Although it may not deliver much in the way of high-energy tracks, this more low-key approach to composition manages to consistently sound rather pretty, while also being well-suited to the game’s overall atmosphere.

Where I Am Setsuna‘s presentation falters, however, is with its heavy reuse of environments and enemy encounters. It’s hard to shake the feeling of sheer repetition when you’re treading through environments that recycle similar (or even exactly the same) backdrops at other settings entirely, especially when many of the enemy encounters contained within these areas are simple reskins of foes that were already fought in previously-visited locations. Even the game’s final dungeon consists of recoloured tiles that were previously utilised in multiple other near-identical locales, which is something that I found to be shockingly egregious. 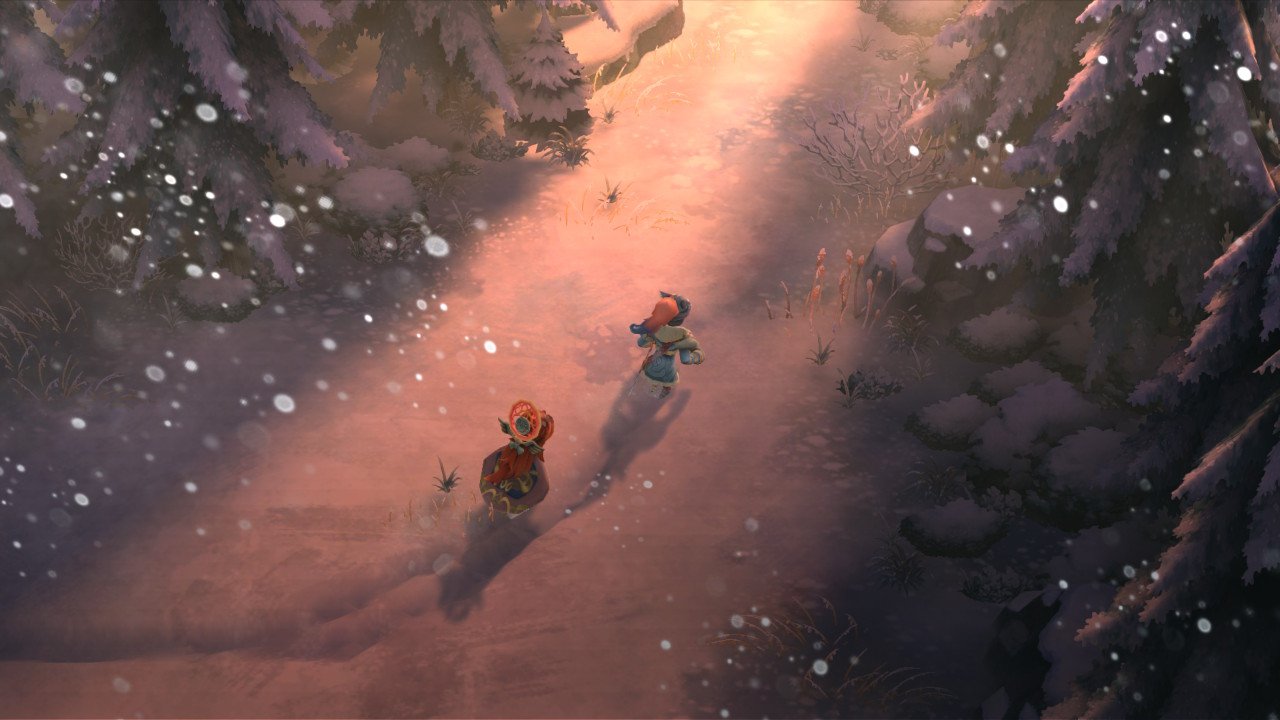 If there’s one major defining feature of I Am Setsuna, it’s the excellent combat system. Taking liberal cues from Chrono Trigger, I Am Setsuna utilises an Active Turn-Based battle system that forces the player to consider both party member and enemy positioning, as well as the areas of effect for each Tech (or ability), in order to attain victory.

To add to this, I Am Setsuna utilises a Momentum system, which essentially serves as a secondary gauge that fills up when a party member’s ATB meter is full. When this gauge is filled, the party member gains one Momentum point, which caps at a maximum of three in total. These points can be spent by pressing the Y button when performing a Tech, which then adds a secondary effect to these abilities, such as additional damage or some form of group heal.

In order to teach individual party members new Techs, players need to equip them with a corresponding Spiritnite. Think of this as being somewhat akin to the Materia system from Final Fantasy VII. One thing that I absolutely loved about I Am Setsuna‘s Spiritnite system is just how diverse each party member’s moveset can be. For instance, it’s entirely possible to teach Nidr — who is a predominantly tanky character — abilities that allow him to heal other party members.

I only have one major grievance with I Am Setsuna‘s battle system: standard enemy encounters are all just a little bit too easy. So long as you sneak up on opponents from behind — which allows you to start each battle off with every party member having a full ATB gauge and one omentum point — it’s usually possible to defeat your foes with only a single attack.

This changes for the better once you get to the boss fights. I Am Setsuna‘s boss encounters present the game with a level of challenge that I was greatly desiring. It’s here that the battle system really comes into its own, with encounters becoming extremely punishing to players who haven’t formulated a viable strategy, or have simply not formed a party that’s effective at countering them.

Oftentimes, when encountering these bosses, I found myself having to carefully micromanage my various buffs and debuffs, while also waiting for an opportune moment to strike. Rarely was a brute-force approach even remotely viable against these opponents. Suffice it to say, it was extremely satisfying to see a strategy I’d devised to defeat I Am Setsuna bosses be successful. 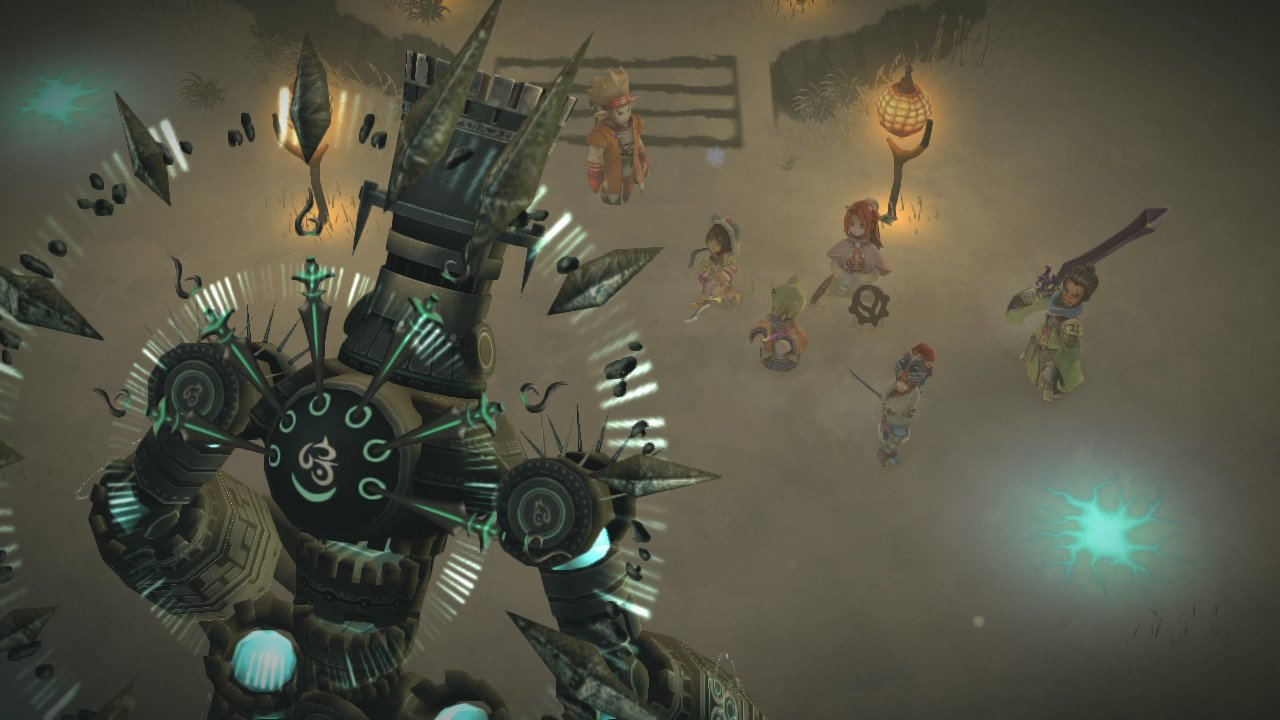 As far as performance is concerned, on the Nintendo Switch, I Am Setsuna manages to hold a stable 30 frames-per-second at almost all times when playing the game with the console both docked and in its handheld mode. I could only find one location in the entire game where there is a noticeable drop in performance, and even then, this only occurred when playing with the Switch undocked and when I was outside of combat.

While some may lament the fact that the Switch port of I Am Setsuna doesn’t aim for the same 60FPS gameplay that the PlayStation 4 or PC versions provide, I never really found this lowered framerate to be much of an issue. The game simply doesn’t require the level of precision that would necessitate the increase in responsiveness provided by a heightened framerate.

It also needs to be mentioned that, since the PlayStation Vita version of I Am Setsuna is unavailable outside of Japan, the Nintendo Switch port is the only portable version of the game that is playable with an English localisation. If you care about eking the best possible performance out of this game, you may want to look elsewhere, but there is still some merit to its existence on the Switch.

I Am Setsuna is not without its faults on the technical side of things, however. For starters, I’ve noticed a couple of odd issues with character models momentarily disappearing, party members falling through the floors of some dungeons, and even item descriptions that are displayed in French, rather than in English. Oddly enough, the latter of these bizarre issues managed to rear its head for a second time throughout my playthrough of the game. Thankfully, none of these problems impeded on my progress through I Am Setsuna, meaning that they were relatively benign and somewhat amusing technical issues rather than anything to be particularly concerned about. 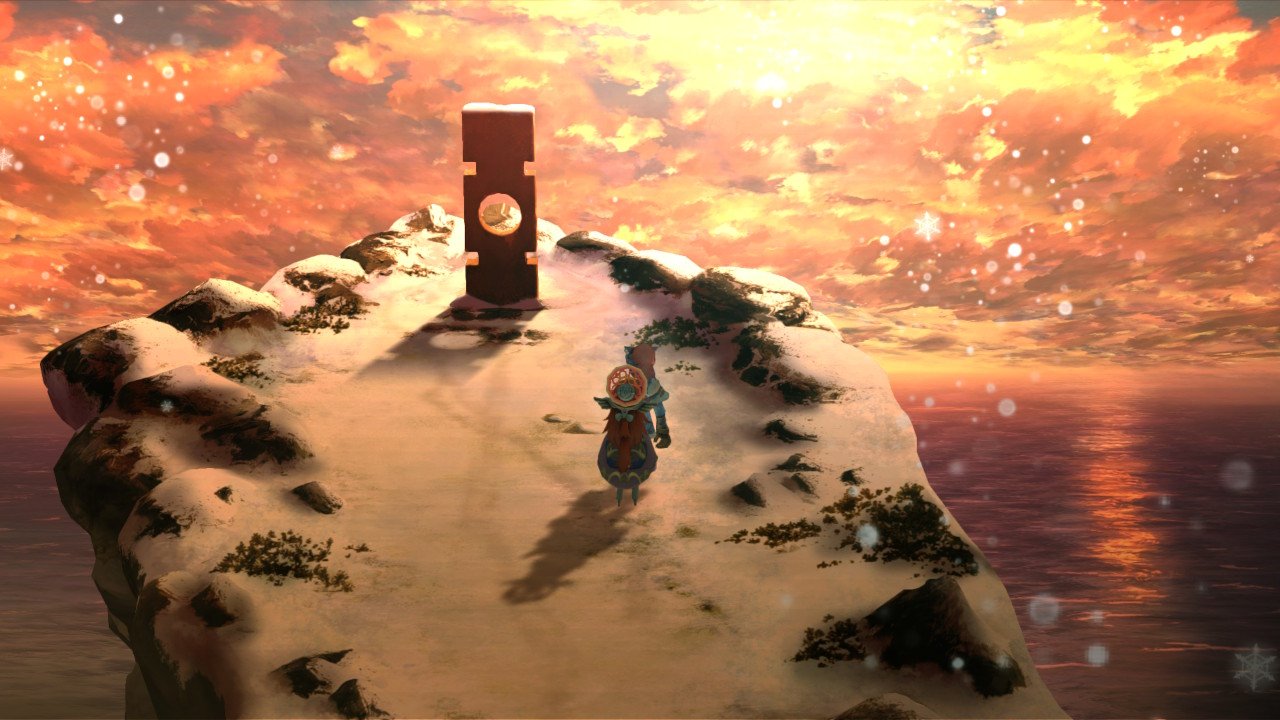 From a presentational and mechanical standpoint, I Am Setsuna manages to lay the foundations for an incredibly solid role-playing game. Unfortunately, this experience is often marred by a wholly predictable story, forgettable characters, and dungeons that feel completely uninspired. Still, if you just so happen to be in the mood for a traditional JRPG, and you’re looking for something to play on your newly-acquired Nintendo Switch, you should consider checking this one out.