The hyperactive, psychedelic, extremely noisy opera that is action anime is custom-made for fighting games. So much of the medium has been built around combat, usually engaged in fantastical, physics-breaking fashion. From Fist of the North Star and Dragon Ball Z to Attack of Titan, Naruto, and everything in-between, anime’s colourful and ridiculous violence often translates well to the gaming world. Hell, there’s even an anime about fighting games now. The lens has turned inward, people.

And so it figures that Trigger Studio would eventually offer up a scrapper based on modern classic Kill la Kill. Blowing up in the mid-2010s, Kill la Kill immediately won over an army of fans with its wild action, eccentric characters, frankly absurd premise, and, of course, lashings of cheesecake nudity. In fact, it’s amazing that Kill la Kill The Game: IF – from APLUS Games and Arc System Works – has taken this long to arrive, given the source material’s obvious potential.

Still, why ask why? Let’s dive into the spiky-limbed world of haute couture school Honnouji Academy and its bizarre, frequently unclothed student body. 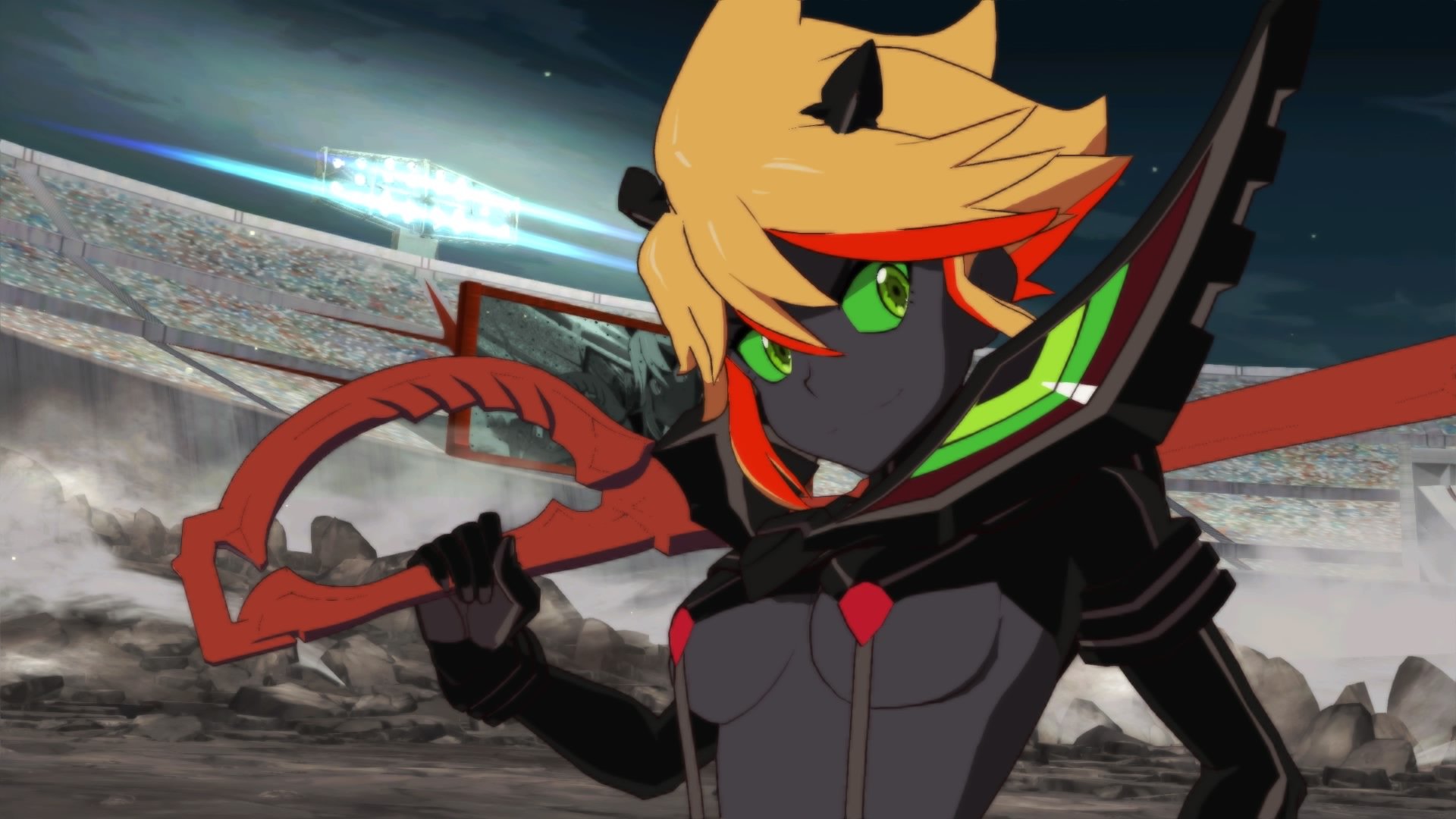 Developed by anime lovers APLUS Games (who were also behind the aesthetically pleasing but technically poor Little Witch Academia: Chamber of Time), Kill la Kill The Game: IF is an arena-fighter which emphasises movement and distance over complex combos. Fighters battle it out on a large 3D plane, allowing for movement in all directions, with action switching between close-quarters battle and long-range projectile-fests.

As is the style for many recent fighters, Kill la Kill: IF features a simplified control system, equipping each of its warriors with standard attacks, projectile attacks, and specials. Hitting the jump button twice causes your fighter to home in on the opponent with an air dash (similar to Dragon Ball FighterZ‘s “Dragon Rush”) while a one-button guard system can be transitioned into swift strafes and dashes with the flick of the directional stick. Essentially, Kill la Kill: IF proffers movement overall, with reads, dodges, and counter-movements rewarding the player with the opportunity to strike, blasting out kinetic auto-combos with a flurry of button presses.

Kill la Kill: IF‘s mechanics are certainly unique. Exciting, even. The control system allows fans – who may not be well-versed in fighters – to start throwing out flashy, cinematic combos with little fuss. But, as a double-edged sword, the action is marred with flaws by the nature of its design. Depth perception is a real problem in IF. At a distance, swift and perfect movement through a flurry of projectiles can be a frustrating exercise. There’s a reason fighters, even 3D entries like Tekken, essentially remain on a 2D plane, and that’s because gauging distance is paramount.

In Kill la Kill: IF, the 3D movement and wide variety of dashes can offer some exciting battles, but can also make for a trying experience when picking your way through a barrage of projectiles and guard-breaking special attacks. Doubly so if the camera has chosen to sit your character at binocular-level distance, or fill the screen with wild visual effects and HUD reminders. In close quarters things pick up, with the auto-combo system allowing for various “routes” based on directional inputs mid-chain. These chains can lead to juggles, air combos, wall-crumples, and spectacular supers.

As a fighting game, Kill la Kill: IF presents acceptable and even exciting gameplay, but its inherent flaws prevent it from offering a tight, reliable fighting experience. Fans of the show will be delighted with the on-screen action, but those looking for deeper mechanics might find that, although it says Arc System Works on the box, Kill la Kill: IF is not on the same level as a BlazBlue or Guilty Gear.

One element where the ArcSys’ inspiration does shine through is in Kill la Kill: IF‘s lively visuals and audio. Character models are crisp, well-animated, and full of life. Intros, winposes, cinematic attacks, and the game’s hilarious “Bloody Valor” insult system do the source material justice, while an cool soundtrack lends charismatic style to the action. Good work is put in on both the Japanese and English dubs, but the in-battle callouts get repetitive real fast. Overall, these audio/visual elements are IF‘s ace in the hole, and fans will be overjoyed to see their favourite characters brought back to life, so they can clench their fists and shout in side-profile all over again.

This leads us to the core of Kill la Kill IF, which is its single-player story campaign. Essentially an alternate re-telling of the events of the anime, (hence the “IF” of the title), the game allows us to revisit some of the series’ more memorable elements: The “Naturals Election,” the Life-Fiber saga, the rivalry between Class President Satsuki Kiryuin and rebellious student Ryuko Matoi, the Elite Four, the delightfully psychotic Ragyo… All these and more are resurrected in nicely-crafted cutscenes, with a plotline that follows familiar threads (no pun intended) but also throws in some surprises.

It is a short journey, however, which the dedicated will wrap up in a handful of hours. Once that’s done and dusted, Kill la Kill: IF offers a few unlockable side modes – such as the COVERS gauntlet battle – but the clunky AI consistently keep these from becoming truly engaging. Local VS. Playing with pals is definitely the key to longevity with this particular fighter. As of this writing, I was unfortunately unable to test the game’s online stability. 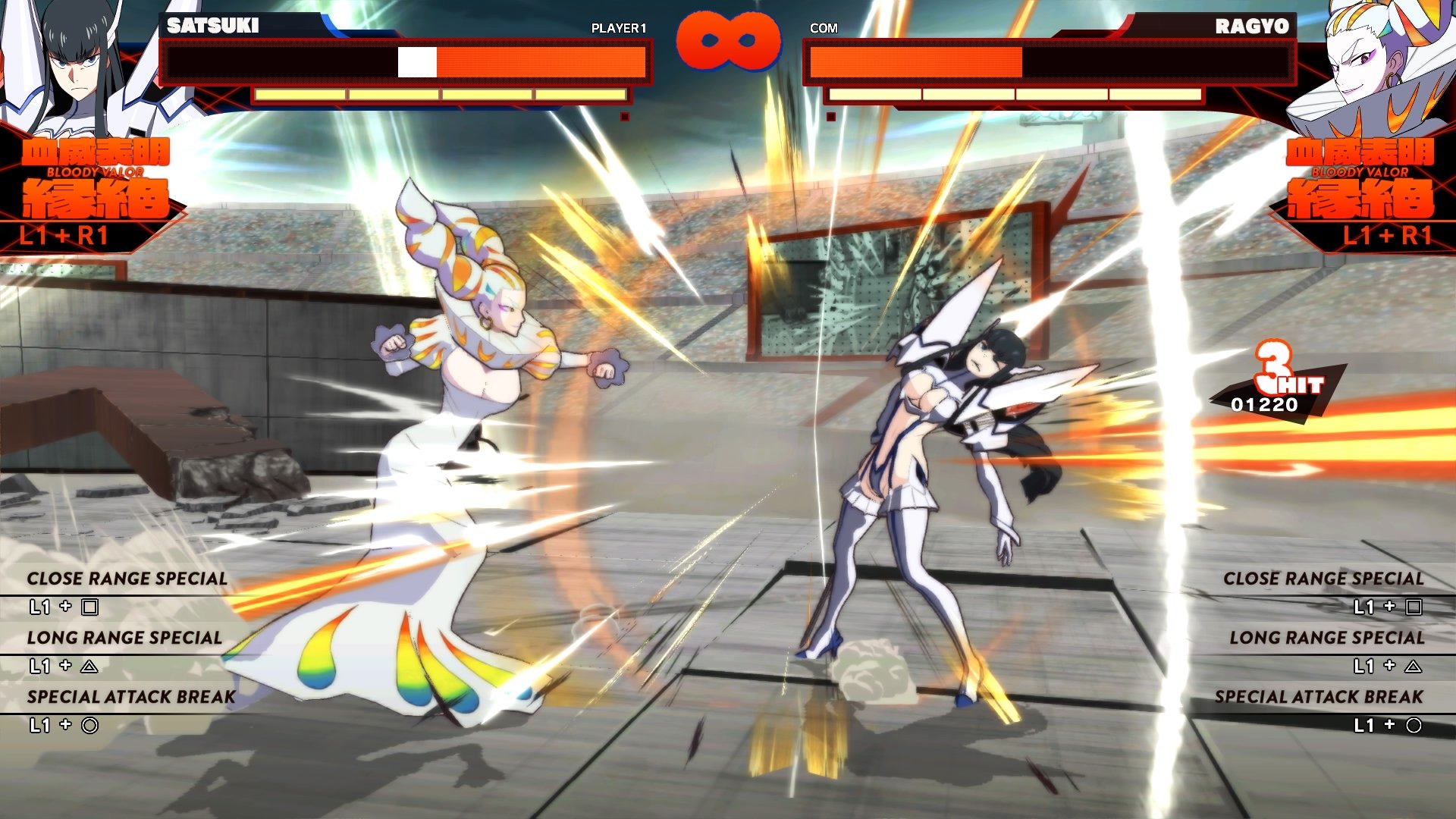 When not busting heads, players can use earned currency to unlock a variety of extras. These include the game’s artwork, soundtrack, and voice lines. The “Special Figure” mode is essentially a diorama playset for you to arrange your favourite maniacs into dynamic poses, which you then can capture for posterity with a camera function. Behave, you. All in, it’s not a deep package for your fifty bucks, especially given the genre’s efforts in recent years to offer players a glut of single-player content.

And therein lies the conclusion drawn by Kill la Kill: IF. Ultimately, enough is done to satiate most fans in terms of sights and sounds, beloved characters, nostalgic references, and limited, but fun gameplay. But IF fails to push for loftier goals, ala Bandai Namco’s Dragon Ball FighterZ, an anime fighter that absolutely smashed through the glass ceiling of its own audience, becoming the darling of the wider community. Still, not every game is for everyone and, through smart presentation and unique action, Kill la Kill: IF should provide the fanbase with solid entertainment. It is very much a “game for the fans,” however, and nothing more.

Kill la Kill: IF succeeds in translating its namesake’s hyper-kinetic universe, wild action, and extreme characters into a fun experience, but is held back by lackluster side-content and flaws inherent to its own design. It’s worth your time if you’re already a franchise fan, but those yet to be ensnared by Life-Fibers should wait until this particular couture number moves to the reduced rail.