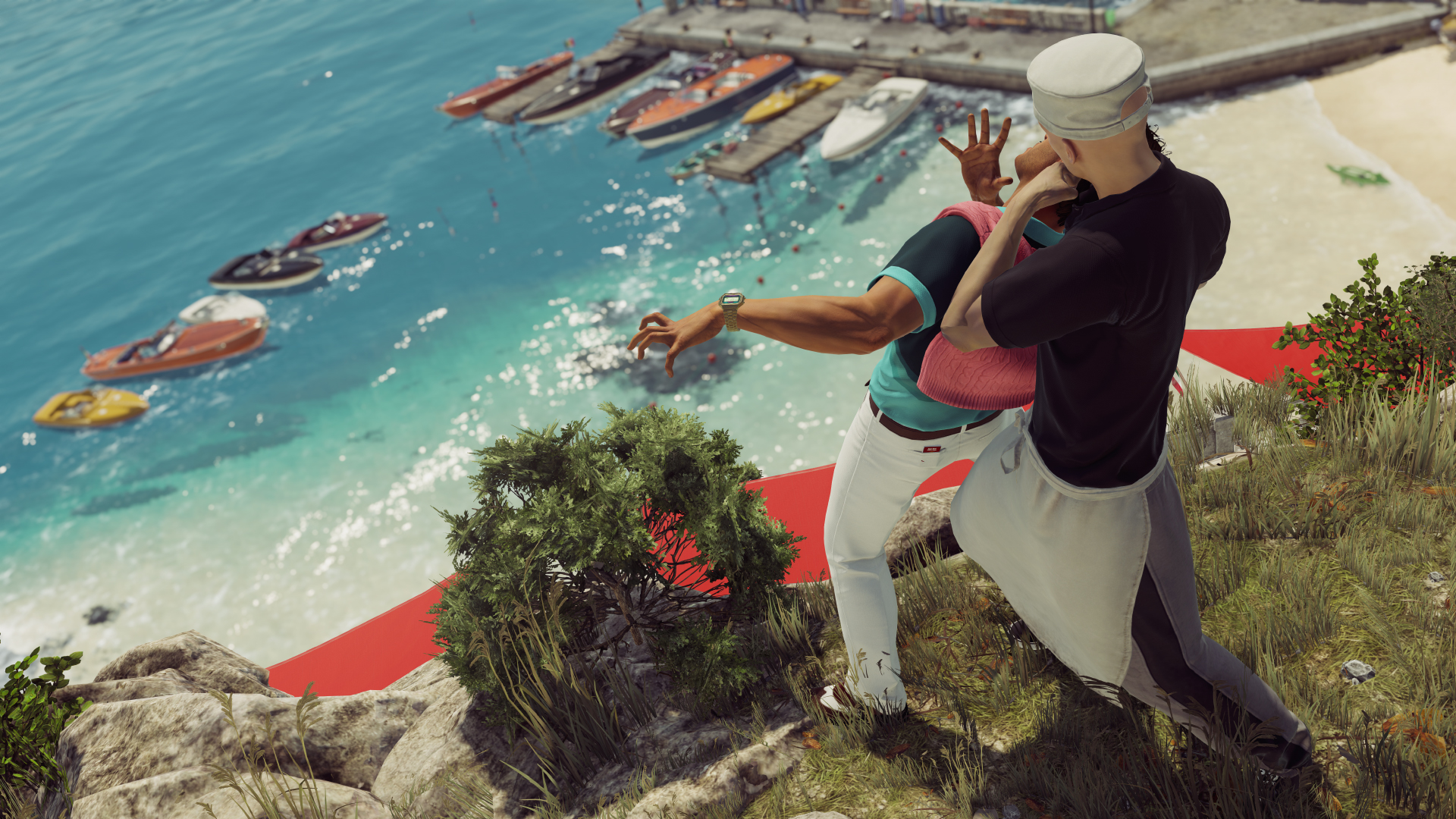 Hitman‘s first episode was a measured, strong proof of concept: that Hitman works best in large sandboxes with interstitial systems, rather than trying to string what are effectively set-pieces into a linear narrative. The job (professional assassin) is contract based, after all, just without those pesky 1099 tax forms that plague an increasing number of us these days. You can catch up on that initial review here.

The second episode trades the Paris fashion show for Italy’s Amalfi Coast. The town of Sapienza does boast a similarly bourgeois mansion, but the biggest difference is the lax, vacation vibe given off by both an ocean town dotted with apartments painted in primary colors and tourists in floral prints and a more languid pace to the actual mission. 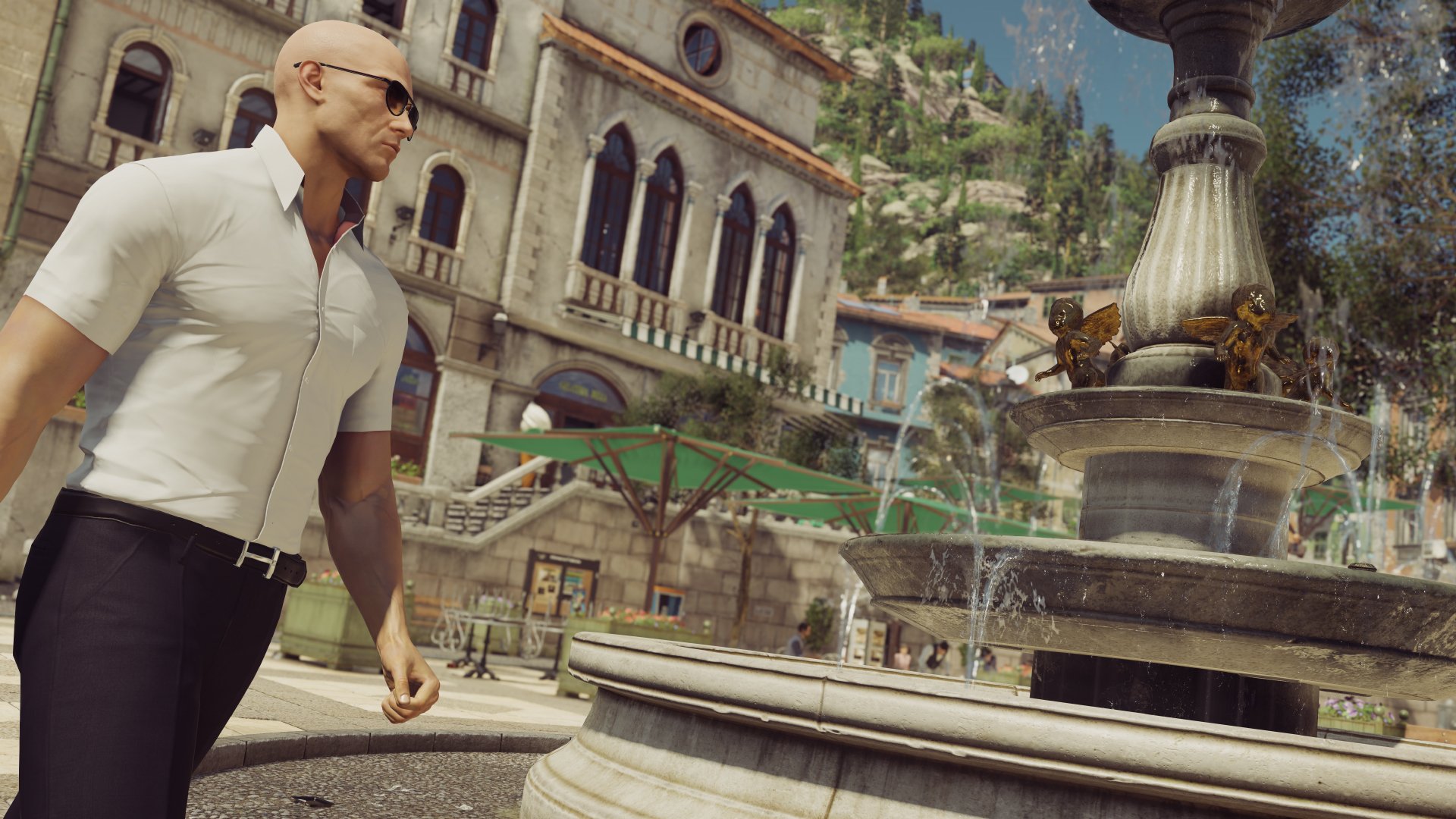 Sapienza’s story mission again features two targets. One is Silvio Caruso, a brilliant scientist with a Norman Bates mom complex that lends itself to some pretty macabre assassination options. Perhaps my favorite involves finding some old home movies on VHS and playing them on the projector in Caruso’s work station. This lures the deeply-troubled Caruso inside where Agent 47, if you care about style, can stand disguised as a genuine medieval plague doctor (pointy nose mask and all) before walking up behind a transfixed Caruso and slitting his throat with a ceremonial circumcision knife while a Hitman-lyric-themed approximation of an Italian rock ballad booms over the sound system.

Or you can sabotage Caruso’s golf lesson with an exploding golf ball. Hitman remains a mix of black humor and outright slapstick.

The other target is Francesca De Santis, a scientist sent to serve as Caruso’s minder as his fragile mental state concerns the organization that has outfitted his familial estate with a state-of-the-art biolab where the two are working on potentially devastating biological weapons. Sapienza adds a third wrinkle, however, tasking 47 with destroying the project before escaping, and I’ve found much less leeway in accomplishing that last task, which has kind of made for anticlimactic ends to otherwise free-wheeling run throughs in the mission.

I had an early concern that Sapienza was too easy. There are a wealth of areas easily accessible even without a disguise, while certain disguises do seem to give free rein through the Caruso estate. However, it’s not so much that it’s easier than Paris, but that it’s more open. The latter required almost constant wardrobe changes and even then the tight proximity meant suspicious eyes. Because of that, relying on the Opportunities system, which lets players track (with full way points) “opportunities” discovered through ambient dialogue and eavesdropping, felt a bit necessary, but counter to Hitman‘s exploratory nature.

In retrospect, though, it seems like that was about teaching newcomers how to play Hitman; while Sapienza also has opportunities that can dilute the creative expression of murder if followed by rote, it also takes the training wheels off and lets you explore more and organically come up with these plans. It helps that the area is absolutely massive, with several levels and way more nooks and crannies to explore, like closed shops and peoples’ apartment buildings, all of which feels more intimate than Paris and offers more organic ambient story nuggets. Following the “save the whales” signs to the rooftop den of a hippy, stealing his joint (which has some novel applications of its own), and donning his oversized tie-dye cardigan gives a more lived-in feel to the town.

The main place Hitman continues to struggle is on a technical level. On the PlayStation 4 I’d need two hands to count the crashes I’ve experienced all week (plus one freeze necessitating a hard reset) and while the long load times aren’t as much of a problem this time given the extra slack I found the lax coastal town to offer, it still does put a ding in a game that otherwise encourages you to try new things at the risk of failure. On the whole, though, Sapienza feels more robust than Paris, with even more gag costumes and slapstick deathtraps, leaving me even more confident in IO’s move toward this new model, even if the American voice actors’ pronunciation of “Falcone” physically pains me every time.