In popular Mexican culture, the luchador (masked wrestler) isn’t just an athlete, he’s a cultural icon. El Santo is probably the most power example of the luchador concept’s hold on Mexico. Santo started professional wrestling back in the 1930’s, but before his death in the 1980’s, he had beaten the crap out of secret agents, vampires, and even devils. No longer just a star athlete, Santo had gone on to become a cultural icon for selflessness, bravery, and man’s budding ability to conquer the unknown.

With Guacamelee!, the team at Drinkbox Studios snatched that idealized notion of the luchador and ran with it. You know how everyone in the Pokémon games is obsessed with Pokémon? That’s how the people in Guacamelee! treat luchadors. Their glorification of masked machismo comes off as farce at first, but a few minutes in and it becomes clear that there is more too it that. Luchadors are merely a vessel for the real focus of glorification: 90’s-style animation and gaming.

Like luchadors, the gaming and animation in the 90’s were all about colorful iconography, straight-faced silliness, and dedication to clean, simple, gut-punching design ideals that still pack a wallop to this day. It’s a perfect fit. 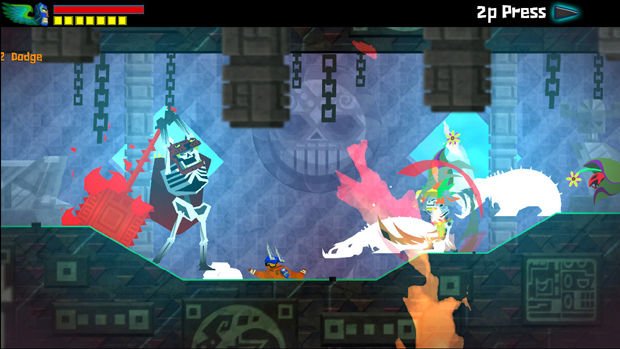 Guacamelee! is a 2D action/exploration platformer about wrestling monsters, but in terms of gameplay structure, it takes cues from a variety of sources. Like in the Metroid series, you scour large labyrinthine zones seeking new techniques which often serve multiple purposes. A flying uppercut will not only help in combat but also work as a limited double jump to help you reach new areas. There is even a power-up that allows you to “Morph Ball” into a chicken to explore pipes and crevices.

Though there are several direct allusions to Metroid here (the Chozo statues are particularly blatant), the game actually has more in common with Cave Story. While the Metroid games are generally solitary affairs, Guacamelee! often punctuates successful battles and discovery of new areas with cutscenes that come alive with a variety of charming and memorable characters.

The story focuses on a regular man named Juan who sacrifices his life while attempting to save the local politician’s daughter from being kidnapped by a well-dressed skeleton. As it turns out, this skeleton is a big-shot politician himself in the afterlife. (Dead) Juan discovers this himself first hand, and with the help of your soon-to-be two-player co-op partner Tostada (another dead luchador with an interesting backstory of her own), Juan finds his way back to the world of the living, now infused with the might of lucha on his side. From there follows battles against cat men, flame faces, lumbering dragons, and more. Every character in the game is dripping with charisma — even the bad guys are undeniably lovable. It’s silly, exciting, and delightful.

The art style is fitting to the subject matter and recalls some of the best of animation of the 90’s, like a cross between Disney’s Hercules and the finer works of Bruce Timm. Characters are bright, bold, angular, and iconic. They stay true to the Mexican setting while carrying their own unique flair (and plenty of tiny shout outs to other games in this vein, like Castle Crashers, Mario, Mega Man, Majora’s Mask, and more). The music is similarly high fructose while maintaining a serious sense of top-notch craftmanship. 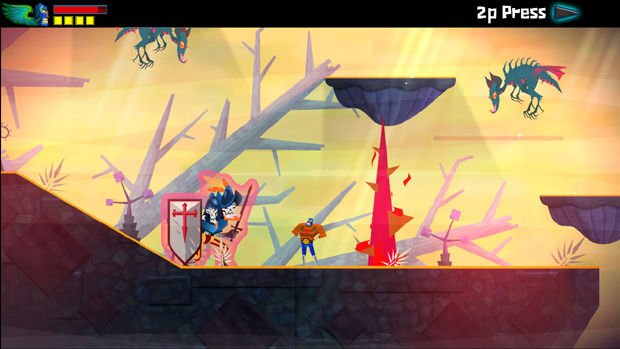 The second-to-second gameplay feels like Viewtiful Joe-lite crossed with Super Meat Boy. You’ll split your time between platforming areas that (generally) don’t set you back very far after falling to your “death” and combat zones that task you to punch, combo, air juggle, and dodge against tons of enemies big and small.

It’s all kept fairly simple, likely to more easily accommodate drop-in/out co-op play. It definitely takes some skill to achieve big combos and to access some of the games more obscure locations, but if you just want to get through the game, you wont have to work too hard. Memorize a few enemy patterns, seek out (or purchase) enough new attacks and health upgrades, and plant a few trick jumps and you’ll be there in no time. 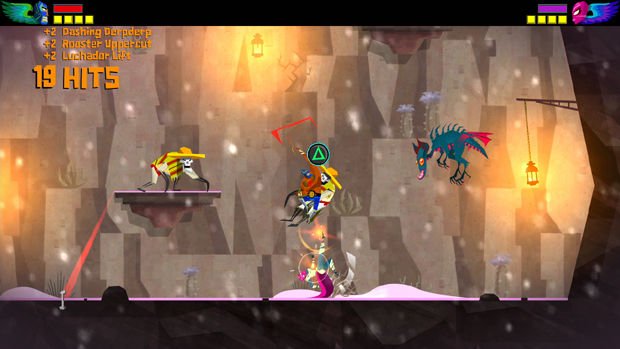 There is also a light/dark world gimmick where you journey between the land of the living and the dead, which expands the scope of exploration a bit, though major power-ups generally exist in the same location in both light and dark worlds. This mechanic sometimes feels a little forced on the player, like when you have to hop back and forth to take out common “Goomba” enemies who can only be damaged in their respective worlds but deal damage to you out regardless of what world you’re in. That’s not to say it’s not fun, but it just feels less graceful than the game’s more finely interwoven mechanics, required tasks, and game mythology.

If I have any complaint about Guacamelee!, it’s that those moments of inelegance do pop up fairly regularly. Most of the power-ups, combat, references, and level designs feel inspired, but when they become ham-fisted, they stick out like a sore thumb. Fairly early on, you acquire a power-up that allows you to preform a headbutt, its primary purpose to break yellow walls, like if there were a special bomb in Metroid that’s mostly used to open doors that say “special bomb” on them. Still, there’s undeniable delight in going back and finding all the yellow walls and busting through. Even at its least subtle, the game is constantly fun, just not consistently tactful about delivering that fun. 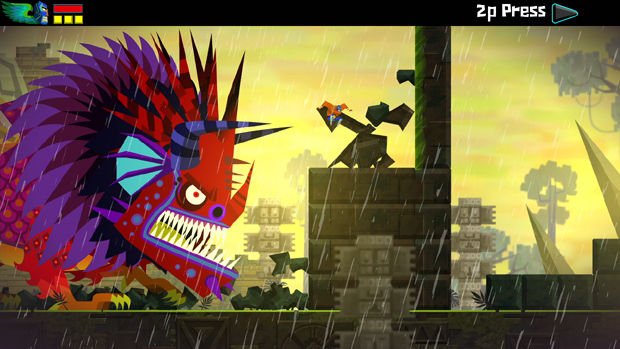 The game fully supports PS3/PS Vita crossplay, and you can use the Vita to control Tostada in 2P co-op on the PS3. The perks don’t stop there either. Collectibles, a horde mode-style dungeon, side quests, a new difficulty mode upon completion, and plenty of other secrets help with the replay value. None of those bonuses would mean squat if the Guacamelee! didn’t provide a fun world to mess around in, which it does.