Everytime I put my PSP down, something comes out to make me pick it back up. And it’s usually an RPG. That said, I have no problems with new title releases late in the system’s life, especially when they’re as engaging as Growlanser: Wayfarer of Time.

While I’ll admit that getting into a remake of a sequel of a series I’ve never played was a bit difficult at first, in the end it was totally worth charging my PSP back up this one last time.

Atlus, this is the last time, right? 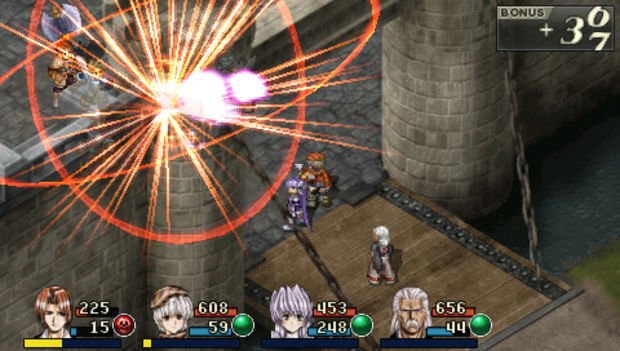 Growlanser: The Wayfarer of Time is a PSP remake of a 2003 PS2 title and the fourth installment of the Growlanser series, though most gamers in the West are unlikely to have played any of the previous series titles. No matter, as Wayfarer stands nicely on its own.

Wayfarer tells the story of a young, shiny-haired guy named Crevanille. He was a special orphan [aren’t they all? — Ed] that was taken in by a gang of mercenaries as a child, and as you’d expect from a role-playing game, grows up to be a mercenary himself. His mostly normal life of typical mercenary duties takes a sudden turn when angry Angels come out of the sky and begin blowing up everyone and everything. It turns out that those in the heavens are set on destroying mankind again, just as they did some 2,000 years ago.  After this attack, Crevanille swears to take out the Angels, though he’ll have to figure out how first. It seems that the traits that make him special might help him out with this task, though. 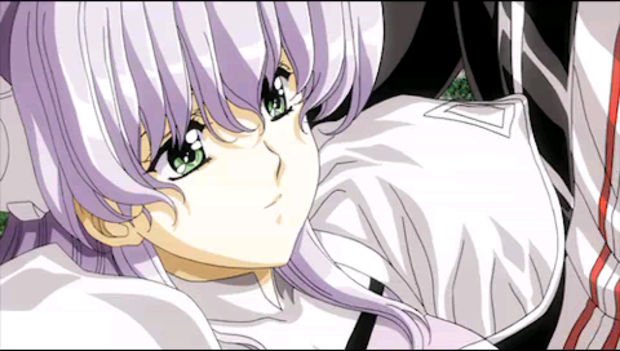 Before we go any farther, I want to tell those considering playing Growlanser: Wayfarer of Time to give it some time. As I said earlier, and in previous articles on the game, Wayfarer was a bit difficult to get into. After a sharp introduction and a good first impression, game’s story switches gears, dropping to a slow crawl. Its dull, shallow characters do little to pull in your interest, and the storytelling doesn’t help matters much. Worse yet, the battle system and equipment options have training limitations that make early encounters a bit boring.

But it does get better. The crap characters are washed away (in a fantastic way), and are soon replaced with much more interesting ones. The story also picks up in a big way with huge plot pivot points, numerous opportunities for party member deaths and visual novel-style dating-sim elements. Most importantly, the battles, the meat and potatoes of this strategy game, turn out to be fully engaging. I’d advise you to just try to enjoy the shiny character art and fancy cutscenes for that first hour or two to hold you over — it’s worth it.

Growlanser: Wayfarer of Time is a strategy RPG…wait, where are you going? Before you run away, know that those that dislike the slow, turn-based, grid-based combat of typical SRPG games might enjoy the changes in Wayfarer, as movement is completely free in these top-down style battles, and the turns are time-based instead of turn-based. 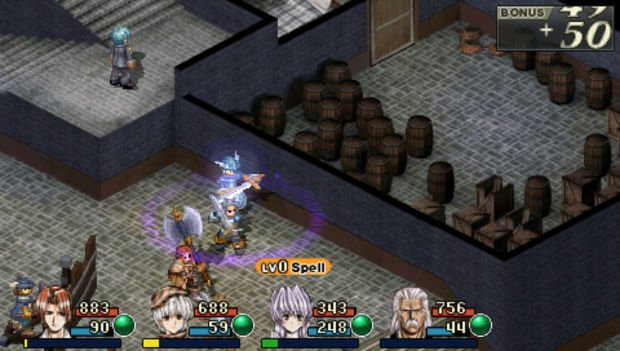 When you encounter an enemy, a menu pops up, letting you enter your desired command against the enemy. For example, for movement, you use a cursor to set up to four waypoints anywhere on the map, and your character will follow them over time. From here, time takes over, with the clearing of each party member’s (and enemy) time gauge determining what happens next. Once the cooldown-style gauge is cleared, the assigned command is executed, and will repeat until another one is issued (or needed). Movement, attacks, spellcasting and more keep the gauge filled, though, hindering the execution of your last command. The combination of all of these time-based elements makes for an RTS-like experience, and it makes what would normally be a pretty dull battle in a standard SRPG much more engaging.

Growlanser: Wayfarer of Time‘s equipment system also adds a neat twist to the standard SRPG methods with its equippable rings, which act as both your weapon and your armor (think Final Fantasy VII‘s Materia system). Each ring has three slots that let you equip spellstones to add abilities or change stats, with the power available to the ring growing as its wearer levels up. And even without spellstones, the rings have their own stat perks. Rings are found by defeating enemies and exploring, and spellstones can be bought or found, but the vast combination of powers to be uncovered are totally up to the player. 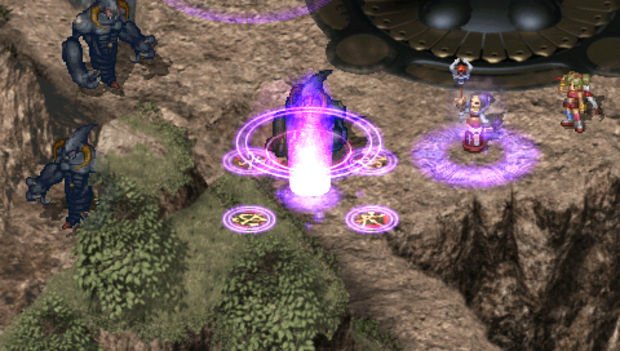 Those up for a stiff challenge will dig Wayfarer, as you’re almost always in over your head outside of standard field encounters. The four party members you have access to will be stretched to their limits in key battles, and all available advantages will have to be utilized in some of the grander ones. I quickly found that grinding up to a higher level was not the answer in failed key battles, and that only proper and exact strategy would see me succeeding. When you do win, it feels great, like you’ve achieved something nearly impossible. It’s a shame that the game does such a poor job at giving players the required victory conditions, though, as it has you playing many of the battles twice to learn what needs to be done.

The presentation of Wayfarer is a bit of a mixed bag. On the upside, the character art from Satoshi Urushihara is shiny and pleasing to the eye, and the animated cutscenes are top-notch. Some may be turned off by the super-anime, overly busty females and the off-the-wall, nonsensical costume mix of the main cast, but these could just as easily be selling points for others. 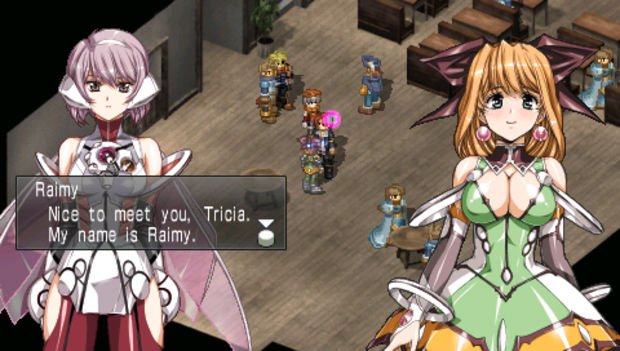 Less impressive are the bland, old-looking overworld visuals and sometimes blurry backgrounds. And while there were only a few instances, the occasional slowdown might bug some. The musical score ranges from sufficient to a punch in the ear, with the short-looping battle theme being the worst of the tracks.

Overall, while it sometimes loses focus, and at other time frustrates, Growlanser: Wayfarer of Time is an engaging, rewarding PSP SRPG. But, again, give it some time. There’s a big world, a solid story with crazy plot twists, some great key battles and hours of gameplay to be found here. You’ll just have to work through a couple of hours of dull and limited introductory play first.