This was supposed to be the game for Godzilla fans — an authentic adaptation that captured the look and feel of the films. In some ways, it is. There’s a satisfying cast of playable characters including Mothra, Destroyah, and Jet Jaguar (he can even shrink!). The camera is staged to give the kaiju a worthy sense of scale. Buildings and tanks are toppled as if they’re mere props.

These are high points of the game. Some people have expressed concern over the graphics — we’re talking PlayStation 2 visuals, at times — but I was okay with that going in. Actually, I still am. It turns out Godzilla has far bigger issues. 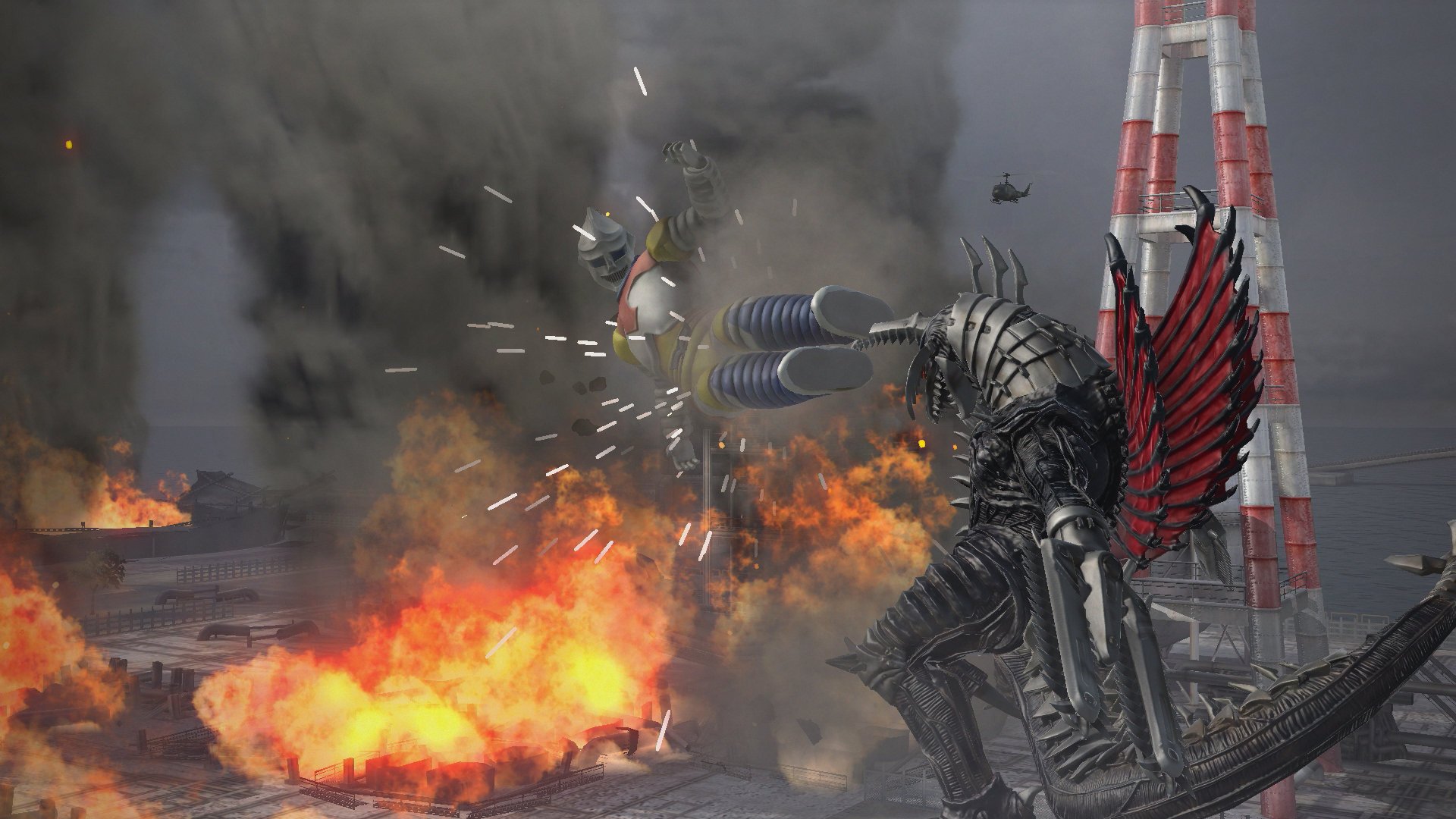 Half an hour and several levels in, I wasn’t sure Godzilla could really be hurt, much less die. That’s not an inherently bad thing, as he’s supposed to be tough, but I wondered where the challenge was. A few hours later, I found it. Godzilla is far too easy except when it veers into overwhelming, unfair, not-fun territory. Then it becomes a boring battle of attrition against the same old kaiju.

A lot of frustration lies in the controls. You use L1/R1 to turn Godzilla, which is weird at first but eventually feels fine. He’s got a forward-charging attack (that you’ll frequently use given his normal plodding pace), a standard three-hit punch combo, a heavy tail whip, and atomic breath. The latter needs to charge up before you can fire it, but the cooldown isn’t terribly long, especially with upgrades. Aiming, however, is a total nightmare; you don’t have exact control over it.

Say you want to shoot down a helicopter. You’ll need to position Godzilla close to it — but not too close! — and line up his body. Next, you can turn the camera to confirm his head is more or less tilted in the correct direction. Now fire away and hope that a) the helicopter hasn’t moved and b) the blast doesn’t just hit the ground. That’s my best strategy and it’s not even consistently successful. Thankfully, it got me through the aggravating fights in which you’re forced to take down a kaiju while multiple aerial vehicles (Super X, X2, and X3) come close, shoot you, then zip away.

For some baffling reason, there’s no blocking in the traditional sense. While Godzilla’s roar acts like a block to an extent, initiating it is by no means instantaneous. You have to know in advance that an attack is imminent or you’ll be too late. There is also this odd invincible dodge move, but it runs on the same gauge as your atomic breath, so it’s often unavailable when you need it most.

The end result is a slow, awkward fighting system that effectively recreates the movies but is annoying in practice. Although your attacks can and will be interrupted by strings of combos, you can’t always interrupt your enemy’s moves. To that end, I stuck with Battra whenever and wherever possible (Versus, King of Kaiju, etc.) — the moth is quick, easy to control, and cheap.

The main mode, God of Destruction, is something out of an arcade game. Levels are tiny, bland, and feature the same goal: destroy the generators. That’s the focus. Generally, you’ll also need to fight a monster, work within a time limit, or both. As you blow up vehicles and buildings, you’ll earn points that fuel Godzilla’s growth. There’s a multiplier to encourage you to move quickly from structure to structure. By the end, he’ll be about twice as big as when he first came ashore.

Branching levels give you control over which kaiju you engage as well as the overall difficulty. You’re meant to replay this mode several times to see all of the (super-light) story and unlock characters, but environments are so similar, so unengaging. I’ve literally punched hundreds of generators to death. There are variations on God of Destruction that have you invading as another beast, or defending as a protector like Jet Jaguar or Mothra. The format doesn’t help.

The game’s extensive character upgrade system requires even more replays. Godzilla has quite a few moves that are locked until you can find and defeat specific monsters, some of which appear under mysterious circumstances. King of Kaiju mode’s six quick back-to-back fights help with gathering resources, but tied to such repetitious content, the progression system is flat-out awful. 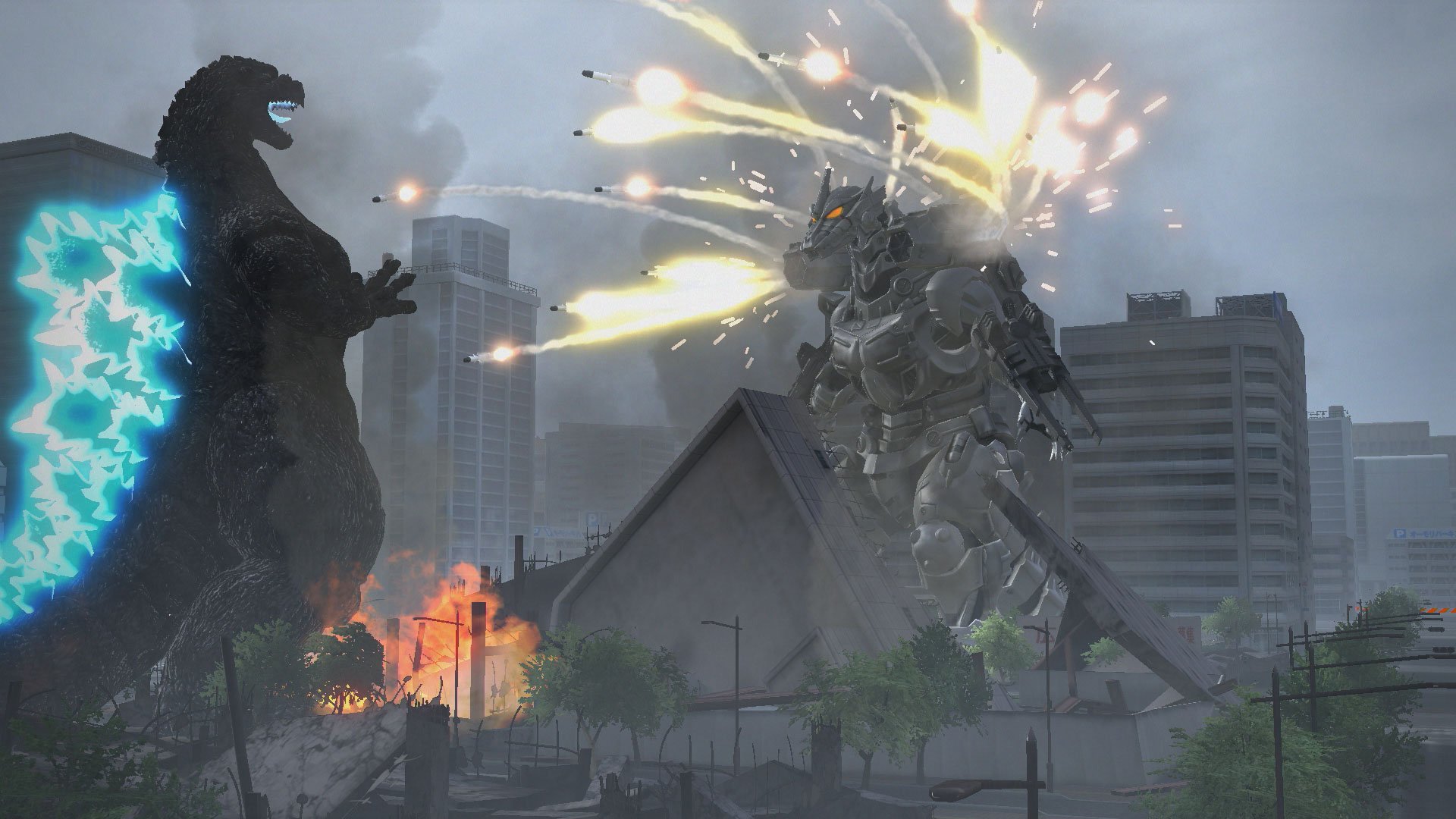 It was also disappointing to learn that the Versus mode for up to three players is online only. No split-screen support. There are Godzilla-obsessed fans playing, at least, so it’s not a total wasteland.

The only other bright spot is the Kaiju Guide, a collection detailing the playable creatures as well as quite a few not featured. I adored seeing old stills from the films and, sure, there is a certain appeal to playing as a bunch of these guys. But the feeling fades before long. A love of the movies can only get you so far when the experience is this frustrating and hollow. What a letdown.