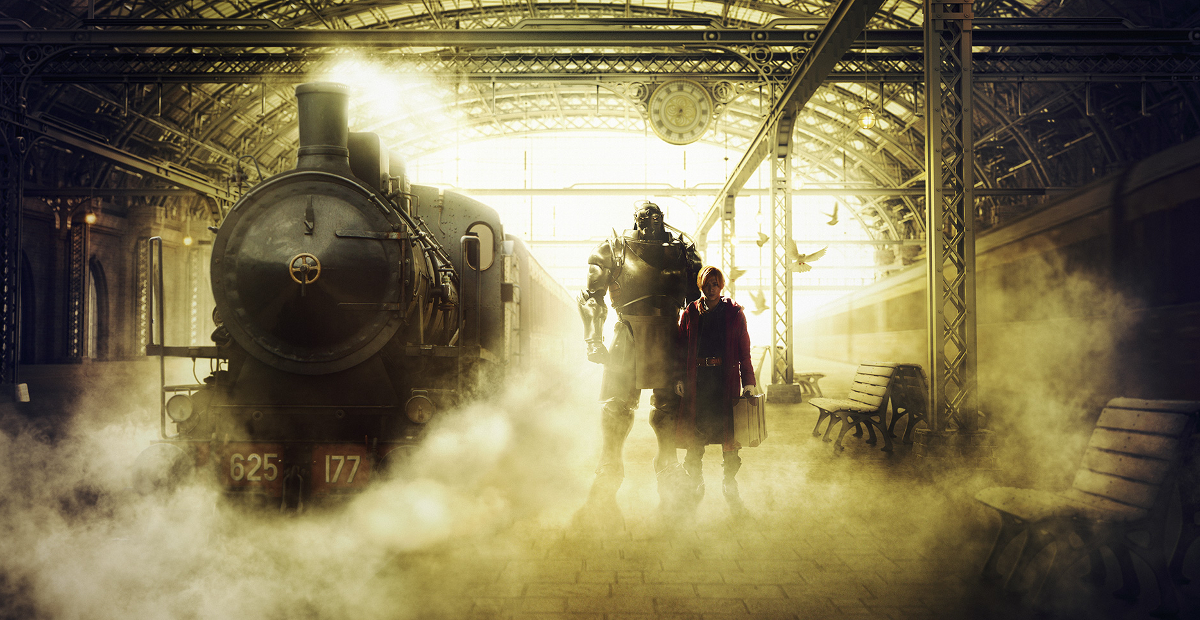 It seems that in recent years there has been an uptick in the amount of manga based stories getting live-action treatments. Some of them good, some not so good, some really bad. So it’s no surprise that the show that was voted as the most popular anime of all time would end up getting a live-action remake.

Because of budgetary and tech concerns, the Fullmetal Alchemist live-action adaptation has been languishing around in development hell for the past five years. While the wait might not have been totally worth it, the movie does its best try at a concise adaptation of the lengthy series before falling flat on its face in the third act.

I’ll start this review off that by stating it has been years since I’ve watched the original anime, but in a way, I think that helps the enjoyment of an adaptation because I wasn’t constantly comparing the new to the old. Of course I’m still going to compare the adaptations because I can’t ignore the past but I wasn’t sitting there ticking off boxes of things they missed.

Fullmetal Alchemist starts out in the past with the brothers Edward (Ryosuke Yamada) and Alphonse Elric (Atomu Mizuishi) committing the ultimate sin of attempting human transmutation to bring back their dead mother and the horrible fate that befalls them for their hubris. We are then quickly thrown into the present where the Elric brothers are State Alchemists hunting down a prophet who has been seemingly performing miracles. Sound familiar? The opening plays out just as you would think a live-action adaptation of Fullmetal Alchemist would. Alchemy battles, comedic pratfalls, Edward getting mad about being called short, state alchemists showing up to fix Edwards problems. It’s all here.

The challenge with this type of adaptation is the knowledge that you can’t shove everything from a 27 issue manga (or a 53 or 62 episode show) into a two-hour movie so there’s bound to be some cuts, but from where do you cut and where do you expand? The story of Fullmetal Alchemist is a truncated story of the Elric’s quest to discover the Philosopher’s Stone, a mystical alchemical item that is said to negate the law of equivalent exchange which states that you must only take from alchemy what you put in. Along the way, they will face off against an also truncated band of homunculi, beings that represent the seven deadly sins. Unfortunately, there is little initial expansion on them so they never really feel like the antagonists they can be. The problem here is that the movie has so many characters that are integral to the story that need to be introduced and expanded upon in a two hour and fifteen-minute runtime that outside of the two brothers and one classic Fullmetal Alchemist garbage human, there is never a real connection made to the characters.

The actors do a great job of portraying the characters we have come to love but because of that, it feels a little off. It feels weird seeing the character tropes that were present in the shows brought to real life because in the medium of animation that type of over-the-top stuff doesn’t seem so jarring but if you make a human get irrationally angry over being called short it comes off as odd.

Visually Fullmetal Alchemist is near perfect when it comes to its locations and costumes. It helps that they filmed in the beautiful mountaintop Italian town of Volterra so the European inspired roots of the source shine through well. The CGI for Alphonse and the alchemy portions are all really well done and that is coming from someone who will try to nitpick any CGI I find. The CGI does fall apart in the third act but then again almost everything does, so why shouldn’t the CGI suffer the same fate as the story.

Obviously, I’m not going to go into the detail but if the first two-thirds of this movie was a live-action manga adaptation, the final third is an Avengers remake taking place in an alternate history Europe. Any potential emotion from events is prevented by the fact that they never really let you think about what has happened, you jump from event to event of the final battle with little time to reflect on what happened. It feels like some studio head realized that they had too much inextricable build up and had to end the movie quick or risk the dreaded two-and-a-half-hour runtime and then made it wrap up fast without much time to spare for emotional connections. It doesn’t completely ruin the movie as a whole but it definitely ends on a bad note and not because of story elements.

In my post-viewing discussion with a friend, we were talking about recent live-action manga adaptations and how they keep seeming to miss the mark. While we couldn’t come to a definitive conclusion about what they keep missing I think with this one at least it feels like Fullmetal Alchemist could have benefited from an extra half hour or so of run time or maybe even splitting it up into two movies like they did with the Attack on Titan adaptation. This is especially true since best girl Rosé is nowhere to be seen, nor is fan favorite Armstrong. It’s not exactly insulting to your eyes and ears, but it’s also not going to be pushing anyone who doesn’t already have Netflix to subscribe. My suggestion is if you are a fan of the original source and have two hours to kill, it’s alright but anyone who isn’t would do better to just watch the show.