You may have heard of Flywrench before. A freeware prototype version of the game has been floating around since 2007, and many people were introduced to it due to the eponymous flywrench appearing as an unlockable character in Super Meat Boy.

Nearly eight years later, a polished and updated version of Flywrench has finally made its way onto Steam with a ton of extra levels, modes, updated physics and graphics, and a brand new soundtrack. The prototype already seemed too good to be free, and all of the shiny new additions to the full game definitely make this one worth the price of admission. 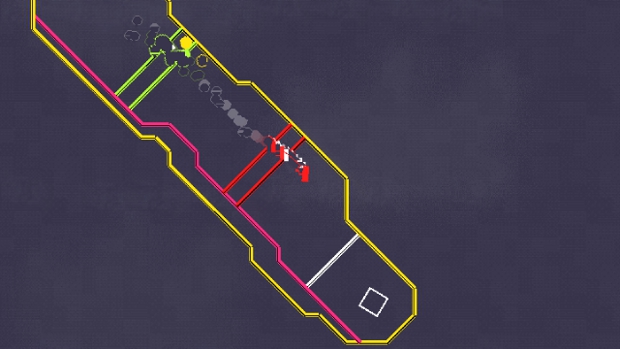 Flywrench is a little difficult to describe without actually seeing it in motion. It’s essentially an aerial obstacle course, where the goal is to guide the ship to the end of the level while passing through barriers and avoiding walls. It has the same sense of intense difficulty with rapid respawning as many notably punishing platformers such as Super Meat Boy and VVVVVV, without actually being a platformer per se.

The flywrench moves by flapping its wings, and it will plummet to the ground rather quickly if it doesn’t keep flapping. If the flap button is held down, the wings will come together to form a vertical line and the ship will change colors from white to red. Another button makes the ship barrel roll out of control and turn green, and also allows it to bounce off of boundary walls. The color of the ship is very important, because it can only pass through barriers if it matches the color. A big part of the gameplay involves quickly switching between forms so that the ship can safely travel through barriers, all while continuously flapping to stay afloat.

The levels start off rather simple, slowly introducing new mechanics in short areas so that the player doesn’t get overwhelmed too quickly. Moving from planet to planet, the levels steadily become more difficult. Each planet introduces a new obstacle to overcome, such as rotating barriers, turrets, switches, gravity pools, and more. All of this culminates in the final planet, Mercury, which steeply ramps up the difficulty by throwing every mechanic at the player in a gauntlet of truly challenging stages before the grand finale of the Sun.

Like Super Meat Boy, Flywrench is one of those games that requires a lot of patience and determination to master, and you’ll be filled with joy and rage simultaneously as you try to overcome the challenges. Once I got to Mercury, I found myself involuntarily clenching up as I tried repeatedly to overcome a tough level, tossing out all kinds of expletives every time I died, before rejoicing and fully relaxing every part of my body once I finally succeeded. And then I continued on to the next level and repeated the process all over again! But it’s all worth it for those beautiful moments where I seem to soar quickly and flawlessly through a tough level, pulling off impressive aerial stunts like it was second nature. 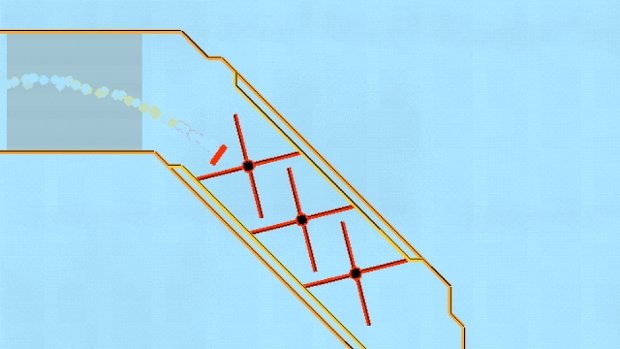 The Steam release of Flywrench makes a lot of much-needed improvements upon the prototype version. Perhaps most importantly, the physics have been tweaked to make it much easier to maneuver precisely through the air. The ship keeps its momentum going with every movement and flap, and barriers now hold that momentum until the ship has passed through them. It also feels much easier to maneuver left and right while changing colors now. Also, the ship will slightly gravitate towards the exit portals when it’s close enough, so even if your aim is a little off, it still might be good enough to get sucked into the exit. All of these changes make the gameplay a bit less frustrating and allows the player to feel more in control. Granted, it is sometimes a little too difficult to break momentum, which led to a huge number of deaths as my flywrench flapped one too many times and was unable to slow down before crashing into a wall. But that’s just something to get used to.

The graphics and soundtrack were also greatly improved. It now has that signature Messhof art style seen in many of his other games such as Nidhogg, with added effects such as a trail of exhaust leading out of the ship and an explosion upon death. The soundtrack was completely redone with electronic tracks by Daedelus and a host of other artists, and they sound much nicer than the previous scratchy, industrial-sounding music. Overall, the game is simply more pleasant to look at and listen to. 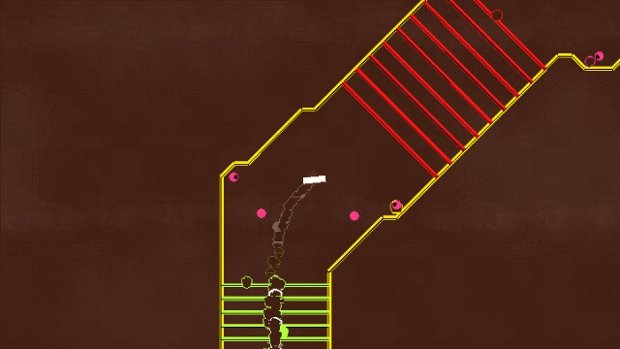 A few new modes were added to the Steam version as well, including time trials and a level editor. Each planet has its own time trial which unlocks once you have beaten every level for a given planet, so you can test your skills by beating each stage quickly with as few deaths as possible and try to climb the leaderboards. The level editor is also pretty neat. It allows you to create your own planet and add as many levels to it as you want, which can then be downloaded and enjoyed by other players. It’ll be interesting to see what kinds of challenges other people can come up with.

Flywrench comes highly recommended from me, especially to those gamers who are always seeking a new challenge. If you enjoyed Super Meat Boy, VVVVVV, and the like, you will certainly enjoy this one as well. It does a really great job of easing new players into the mechanics too, so it’s worth trying out even if the difficulty sounds daunting. I can definitely see myself coming back to replay Flywrench many times down the line. The feeling of determination as I try to conquer a punishing game and the satisfaction of finally emerging victorious is like an addiction, and I’m forever thankful that games like Flywrench exist to scratch that itch.