There’s a very simple reason why so many modern pro-wrestling games are bad. Pro-wrestling is not a legitimate competitive fight, it’s two or more people working together to put on an incredible, breath-taking performance. Wrestlers work within slight nuances of pace, timing and storytelling. The psychological skill of knowing when to kick it in and when to cool it down is just as important as the memorable characters and jaw-dropping moves.

But in a video game, you’re working against each other, because you’re both trying to win. That’s all well and good for FIFA, Madden, or even Street Fighter. But you can’t accurately capture the speed intensity and atmosphere of modern pro-wrestling in a complex, realistic sim. That’s why when Adam Cole (Bay Bay) and Ricochet have a ladder match in NXT, it’s a breathless thing of beauty, but if you had the same match in a WWE 2K title, it’d be a boring, clumsy clusterfuck. The more “realistic” the genre gets, the worse it gets.

Fire Pro Wrestling is a long-running series that strips wrestling sims back to basics, while featuring deep gameplay mechanics and so many customisation options that it becomes less a competitive wrestling title, and more of a sandbox wrestling title. Fire Pro isn’t attempting to perfectly recreate Sports Entertainment “like on TV”, it’s instead trying to encourage players to create their own memorable moments within the confines of the squared circle. 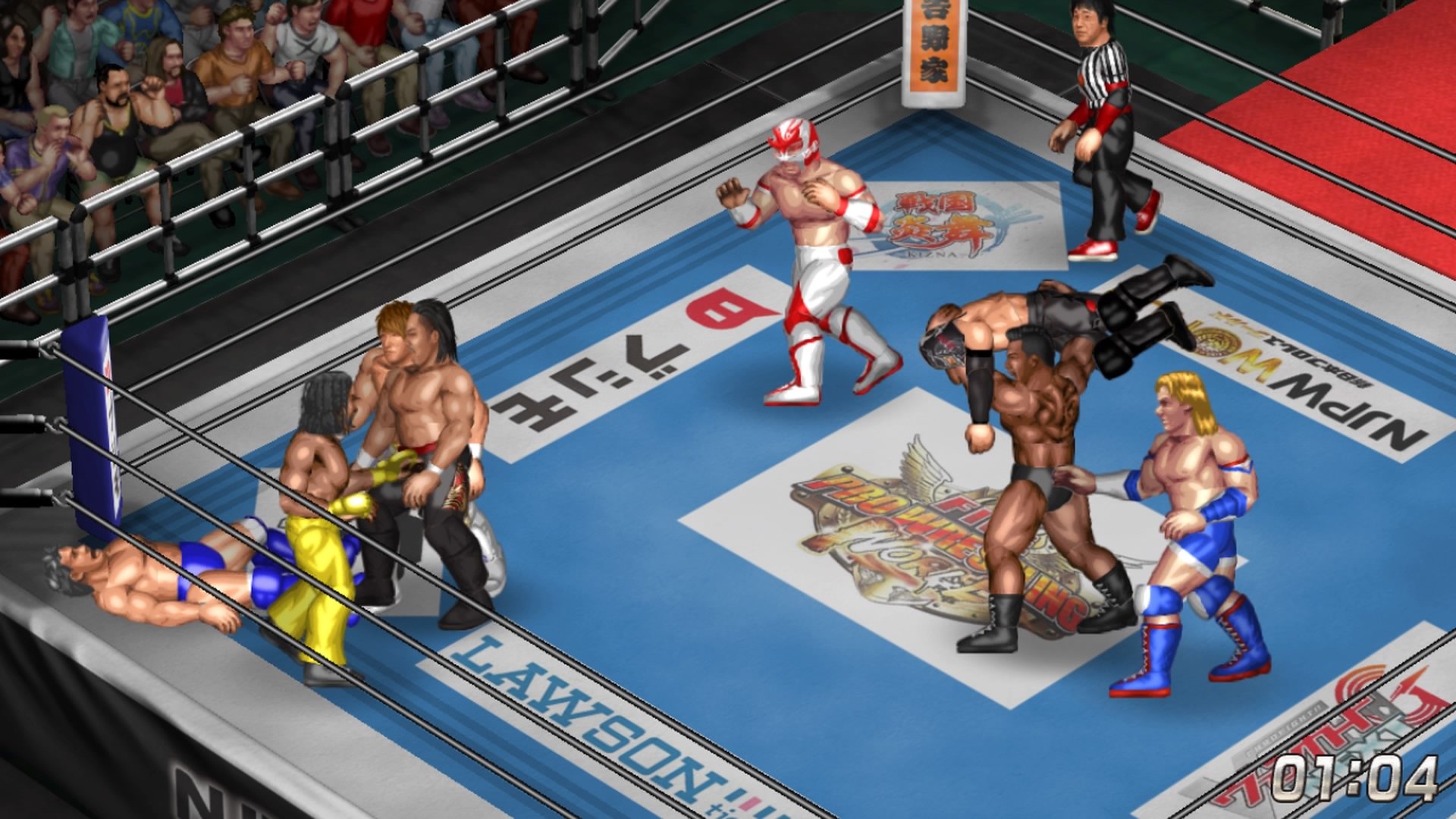 It’s taken some time for Fire Pro Wrestling World to make the leap from Steam Early Access to PS4. Over a year, in fact. The game’s core mechanics remain mostly unchanged from the PC release which, to be fair, remain mostly unchanged from the PS2, Sega Saturn and Super Famicom entries. You move your chosen wrestler with the thumbstick, the face buttons represent Weak, Medium, Heavy and Run. One shoulder button allows you to catch your breath, another pins the opponent, and that’s it. Because that’s all you need.

Fire Pro avoids button-mashing altogether, basing its rumbles on spacing and ring-savvy. Strikes are a matter of distancing, while grapples are based on timing. There are no visible health or stamina meters, and you can’t just open your match with a Canadian Destroyer (sorry, indie kids). Players work through their moveset, from weakest to strongest, in order to score the eventual pinfall or have the opponent cry uncle. Fire Pro is about precision, pacing and reading the match. Anyone smacking buttons will be left looking at the lights like a mid-’90s jobber.

Obviously, everything comes with experience. Although Fire Pro World isn’t a game you can just launch into, beginners will have the basics down after only a couple of sessions. With a little practice – plus the game’s so-so tutorial modes – you’ll be putting on Bret vs. Austin in no time. Most importantly, it’s this simple-yet-mature approach to control that makes Fire Pro matches flow – and feel – like genuine pro-wrestling showdowns.

A part of the licensing deal struck with legendary promotion New Japan Pro Wrestling, “Wrestler’s Road” is a new mode that sees you take your custom-made trainee on a journey to capture the coveted IWGP title. Players guide their ham ‘n’ egger from tryouts to the big time, with a visual novel approach to storytelling and an RPG-style stat system. It’s great to see such a star-studded addition arrive in the series, but it’s a little dry, and I just wanted to get back to having varied exhibition matches.

The core of Fire Pro, however, lies in its deep sandbox elements. You can have up to eight wrestlers fighting it out in singles, tags, battle royales, cage, hardcore and death matches. FPW even has its own built-in MMA mode, amusingly known as “Gruesome Fighting”. Brock and Ronda fans should be stoked.

This isn’t to mention the famously deep customisation options, allowing you to create essentially any pro-wrestler who has ever stepped into the ring, along with a host of pop-culture, anime and video game icons who haven’t. You can also customise rings, referees, entrances and title belts. The new “Fire Promoter” mode allows you to build and run your own federation, putting Roman Reigns in every main event and jobbing out Asuka because she was getting too popular.

Customisation is the core selling point of the Fire Pro franchise, with thousands of wrestlers already available on Steam Workshop. A day-one patch will launch “Fire Pro Net”, allowing PS4 players to share their own creations within the community. Expect a similar legion of stars to show up within weeks – days even. The Fire Pro faithful are nothing if not eternally dedicated, keeping the games constantly updated to align with real-world rosters, wrestlers and even ring gear. 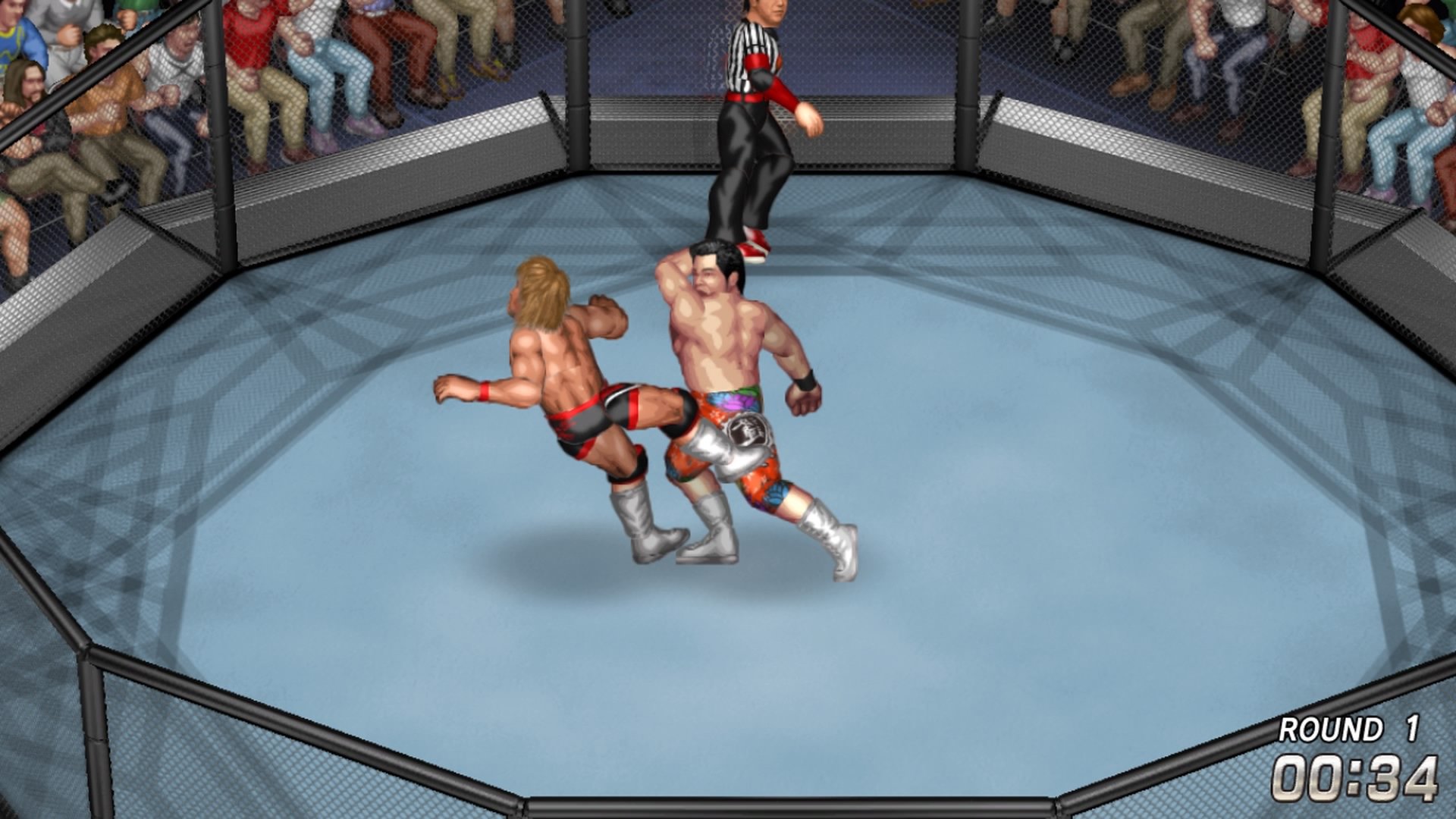 FPW does have its negatives. The game retains its finnicky, needlessly awkward menu system, featuring slots-within-slots-within-slots. You can get your head around it, but after years of releases, there’s no real excuse. The cheap-looking presentation style is a let-down, and belies the strength of the game that lies within. Speaking of aesthetics, the optional in-game music is cheesy, uninspired and becomes repetitive real fast. Turn it off and work with the crowd.

Unfortunately, the PS4 version has, what may be to some players, deal-breaking technical issues. The console version’s framerate noticeably drops in multi-man matches, and also suffers from surprisingly lengthy load-times. The day one patch has improved these issues, but not eradicated them. This is a real shame, as the PC release suffers no such framerate snafus, being as smooth as a Kairi Sane elbow. As for online, I was only able to play a few matches. Most of them were fine, but the connection feels wobbly, and you’d probably be best sticking to nearby players as much as possible, and timing is everything in FPW, and even the slightest lag can mess up your match, and limbs.

Platform-wise, Fire Pro World is in a difficult place. The PC edition is cheaper, has established an amazing mod community, and simply runs better, but the NJPW and other single player content is a month away, and has its own price-tag. The PS4 release is pricier, and has some technical hiccups, but is the “complete” version of the game. PS4 will also likely have a bigger player-base, especially in Japan, and thus may be adopted as the lead platform by the developers. Personally, even without the extra content, I’m convinced the PC version is the better-playing version of Fire Pro World, though the PS4 version will likely prove more popular – and may catch up technically in future updates.

Fire Pro Wrestling World is the best wrestling game on the market. FPW provides wannabe McMahons with a vast toolkit to build the wrestlers, promotions and matches of their dreams, while keeping the action tight, exciting and, most importantly, fun. FPW’s simplistic visuals and learning curve may discourage some, who demand more flash for their cash, but those who take the time to unlock its potential may find it hard to step in the ring with another wrestling title ever again.