It’s hard to believe, but the relatively recent Enter the Gungeon is now officially a franchise. I mean it pretty much cemented itself as one once the arcade cabinet was unveiled at E3 this year, but now it’s officially official with a cleverly named mobile follow-up: Exit the Gungeon.

Uniquely, Exit is actually part of the initial launch offering for Apple’s new Arcade subscription model, but it probably could have stood up on its own. 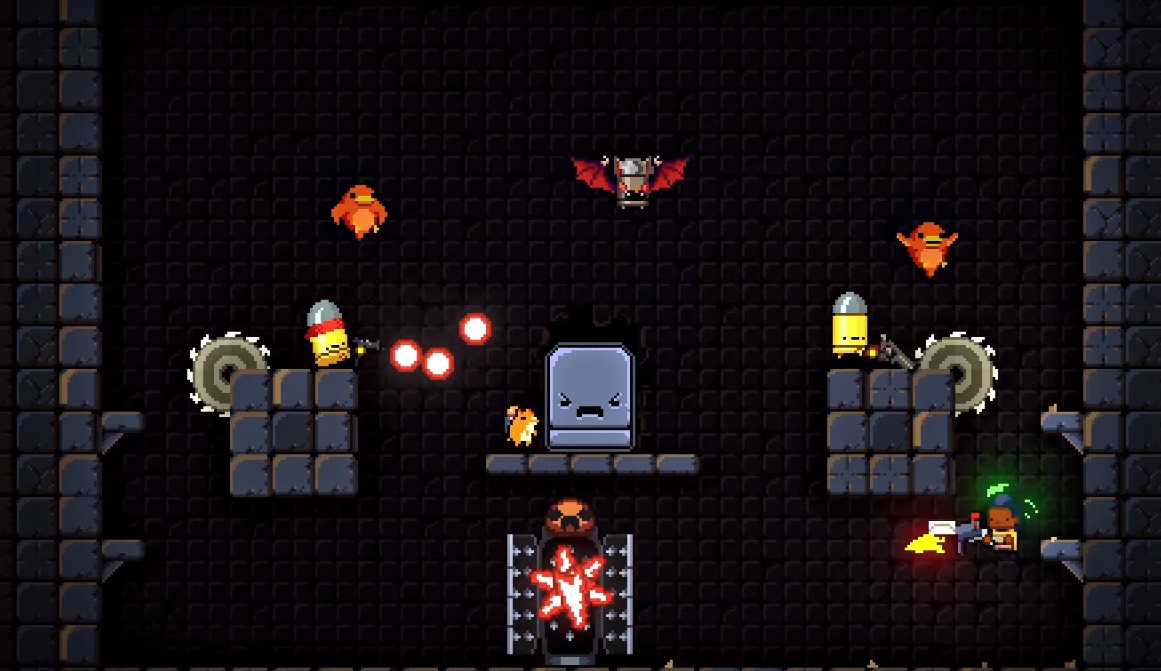 What was once a roguelike is now a Super Crate Box…like.

While Enter proper could have been very much playable on mobile thanks to the new controller update, Exit is more like a bite-sized version with the same aesthetic, and part of the same charm. If you’re not familiar with it, this is an irreverent world full of snappy, sarcastic NPCs, enemies shaped like bullets, and tons of cute things that want to eat your face off. It’s endearing until it isn’t, which in this case is a little more often than its predecessor due to some repeating enemy models.

Given the 2D shift, leniency is granted. Both jumping and falling down platforms is considered “dodging,” on top of the existing horizontal roll. The “blessed” mechanic in which you’re granted a new gun periodically is permanent, preventing the need to swap weapons. It’s very arcadey, good for a breezy half-hour-or-less run, and lacking some of the depth inherent in Gungeon‘s debut by design.

If you opt for the touch control scheme Exit will take care of most of the heavy lifting: auto-shooting and pausing the game with a sort of bullet time effect when you dodge (complete with a little aiming reticle). By connecting a controller you’ll unlock the full real-time experience, which operates like a 2D twin-stick shooter. If possible, go for the latter approach, though note that full button binding is coming in a later patch, so you’re at the mercy of the default settings.

That’s pretty much it. The flow involves taking an elevator up a shaft, battling waves of enemies along the way, stopping at an occasional trap-filled room, fighting the odd boss at the end of a sequence, then buying items at a shop. Rinse and repeat until you…exit the gungeon. Unlike other roguelikes where you can rush ahead and avoid the slow start if you know what you’re doing, you’re at the mercy of the elevator ride. Later on levels get more unique, like a series of challenge rooms that just happens to be connected by an elevator hub, but getting to that point can be plodding.

Exit the Gungeon is an interesting experiment and a clever way to keep the series going without copying what’s already been done; but along the path to mobile, some crucial elements of the DNA of the franchise were lost. I’ll still be following it through its post-launch journey, however, and Gungeon fanatics will find plenty of references to smile at.