The trailer for Energy Hook, a high-flying new extreme sports game from the guy behind the beloved web-swinging mechanic in Spider-Man 2, does not lie.

I’ve always been fond of games that prioritize fast, fun world traversal (Bionic Commando, Prototype, and inFamous: Second Son are a few that immediately come to mind), and as such, I was curious to try this out. Chris had also been looking forward to it, so we figured a multi-editor review was in order. 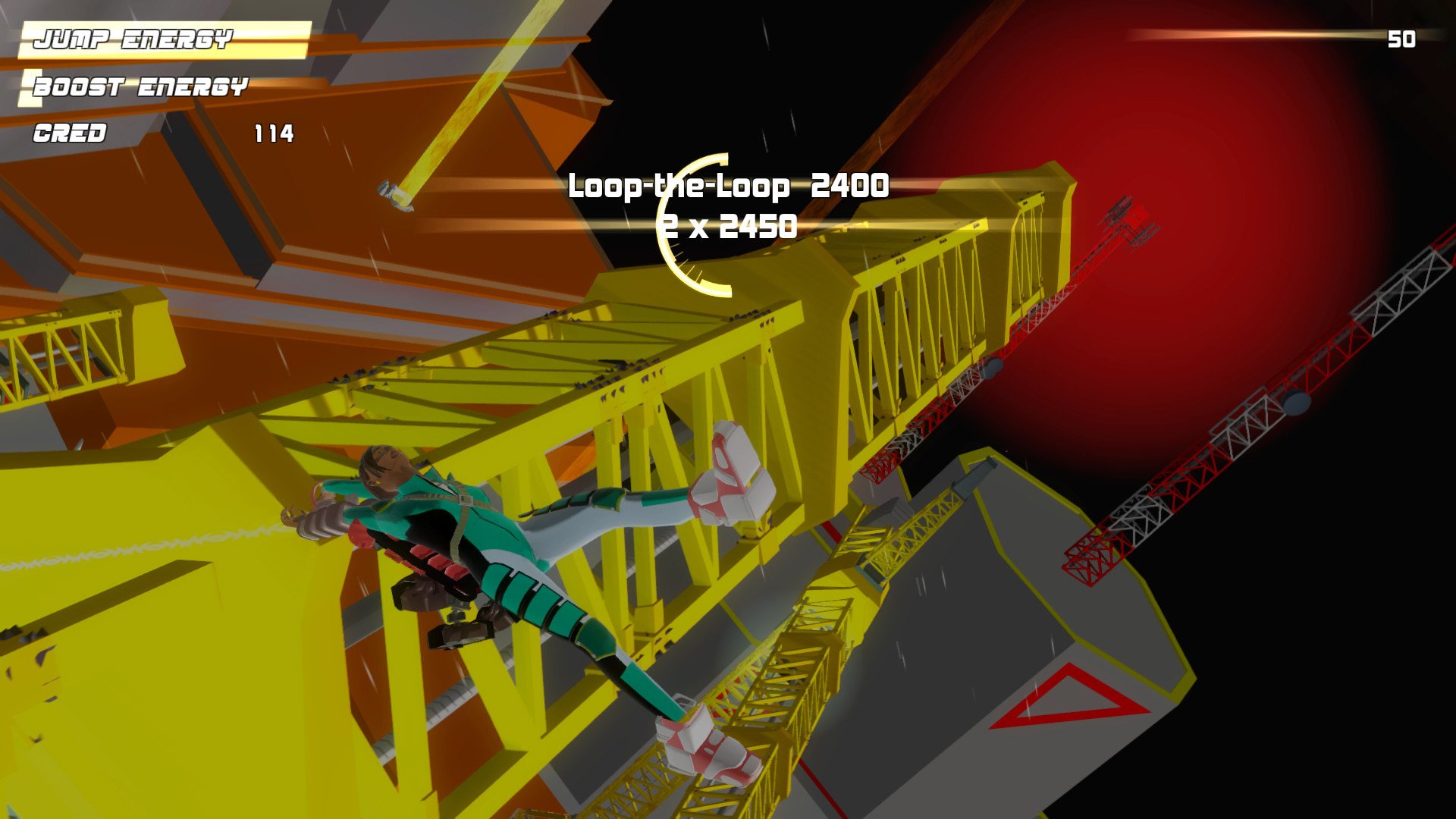 Jordan: The first time I booted up Energy Hook, I couldn’t tell if it was broken or I was. I’m still not entirely sure. You’re dropped off onto this sort of oil rig with cranes and told to run around, jump, boost, and swing to your heart’s content. I understood the basic controls, but I felt like something just had to be wrong — either I wasn’t “doing it right,” or the movement was too wild and finicky to get a handle on.

You gave me some advice on settings to tweak, and that did eventually help.

Chris: Ha yeah, that’s not typically the first thing I do when I play a new game — I tend to have some faith in the native settings — but I just had to here. The camera was swinging around wildly and wasn’t even following the avatar, and it was basically unplayable until I turned off the “follow camera” option and forced the sensitivity down.

You’re right, I really was looking forward to this as such a big fan of Spider-Man 2. It was one of those great “licensed” games like X-Men Origins: Wolverine that didn’t even feel like it was licensed at all, and in some ways, was more interesting than its source film. But some of the mechanics may have been obfuscated by the fact that they had the conceit of “Spidey can swing anywhere, even in open air,” which Energy Hook somehow didn’t have!

I don’t even want to say this could have used more time in the hopper, because so much of it is fundamentally broken.

Jordan: That’s the thing. I get that the game is going for the simple joy of swinging and pulling off aerial tricks above all else, with no real story to speak of, and that would have been fine as an unrestricted arcade-style experience — but only if it felt good to play. Most of the time, for me, it did not.

You’re meant to seamlessly flow between buildings, but I’d frequently veer right into them. There’s a wall-run ability, but it’s so frenetic that it feels out of control. During most missions, you’re asked to race through checkpoints, but it’s so easy to lose sight of where you’re going. There isn’t enough signposting and the respawns after you fall out of bounds can be super disorienting.

The more I played of Energy Hook, the better I got at it, both in terms of my skills and in learning to deal with the game’s many, many quirks. There were some enjoyable moments when I was less concerned with winning and more interested in just zipping around the city levels. Coming at it from that angle, it wasn’t as big of a deal when my character didn’t move or do exactly what I wanted. But there’s a limit to how much you can get out of this experience, and it wasn’t long before I hit it. 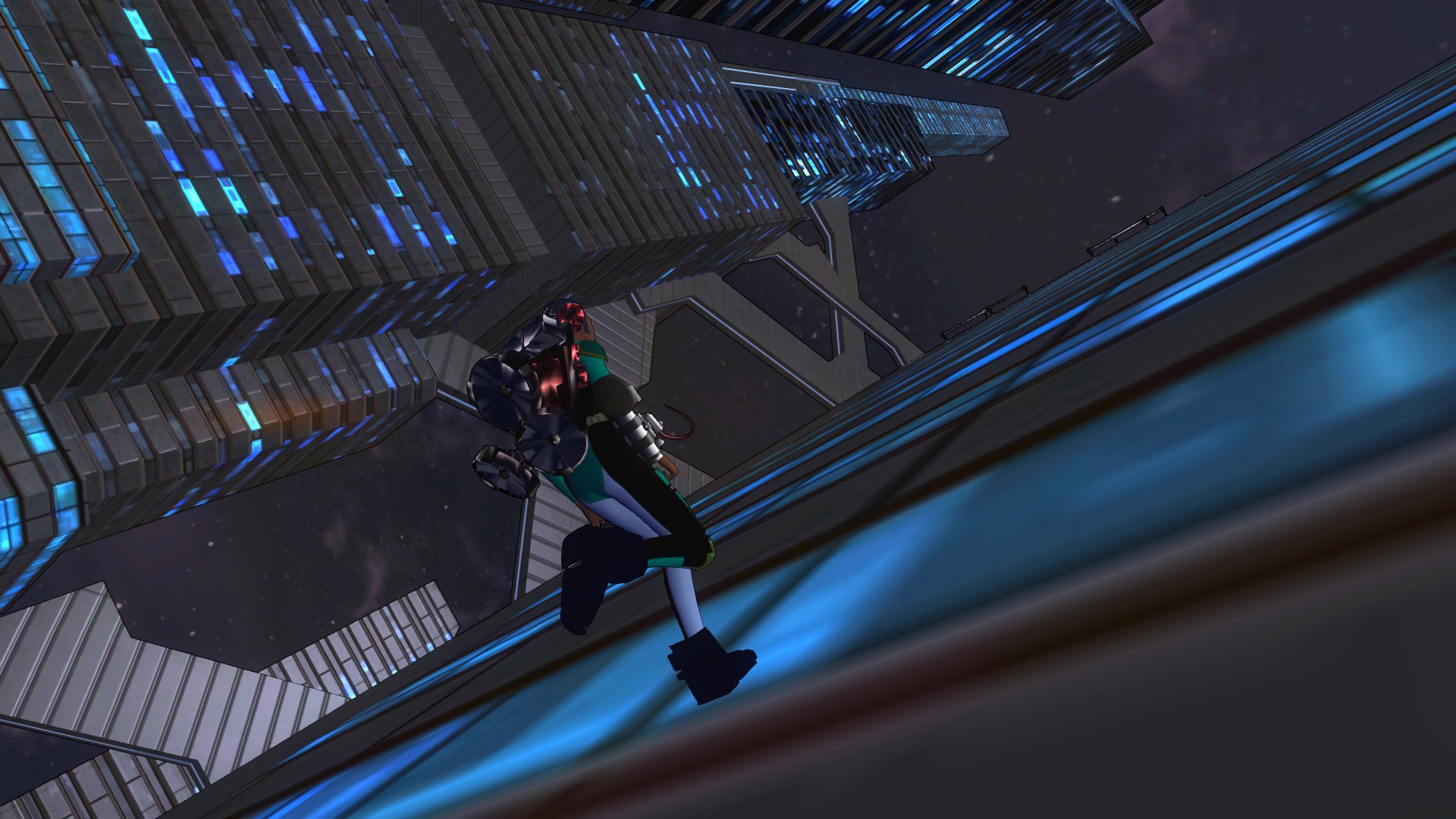 Chris: It’s so wild! Swinging, the entire core mechanic and selling point of the game, feels random. Sometimes I’d have a clear tether point and it would choose something else, other times it would queue up the swinging icon like it was going to happen and I’d fall to my doom. I had no idea that the other concepts like the jetpack and boosting would even be a thing, but they don’t work either. This feels like a Steam Greenlight project, and I’m surprised it got on the PlayStation Network.

I mean, the “no story” idea isn’t new — AaAaAA!!! – A Reckless Disregard for Gravity and many other similar titles did the same thing, but it’s a weird sticking point to focus on in the marketing. It’s a weird game all around. And since all there is to do is basically unlock several more sandboxes and complete similar challenges, it wears its welcome out very quickly. I went back to my Jet Set Radio Future 100% completion run I started recently to get the taste out of my mouth.

Jordan: That’s spot on with how I feel. As much as I want to like Energy Hook — the concept itself is sound, and should work — the whole thing comes across as unfinished and unpolished. Even when the stars align and the game seems to play as intended, the feeling is fleeting. It lacks staying power.