One of the most influential indie games ever released was Team Meat’s Super Meat Boy. A tremendous success story for the small team, it created a paradigm shift for what people would come to expect from homegrown platformers. Pretty much immediately after that, a deluge of tough-as-nails, ultra-precise indie platforms came out that has continued on to this day.

One of the better imitators to come out of that flood of releases was Michael Todd Games’ Electronic Super Joy. Released to basically no fanfare in 2013, it was a flashy, stylish, brutally difficult platformer set to the pulsating tunes of techno music. It was incredibly addicting and seemed to successfully emulate what Team Meat captured with its debut title.

Nearly six years later, Michael Todd is at it again with Electronic Super Joy 2. While technically not the second entry in this series, this is a true sequel in every sense of the word. Sadly, it doesn’t seem to have really upped the ante in any significant way. 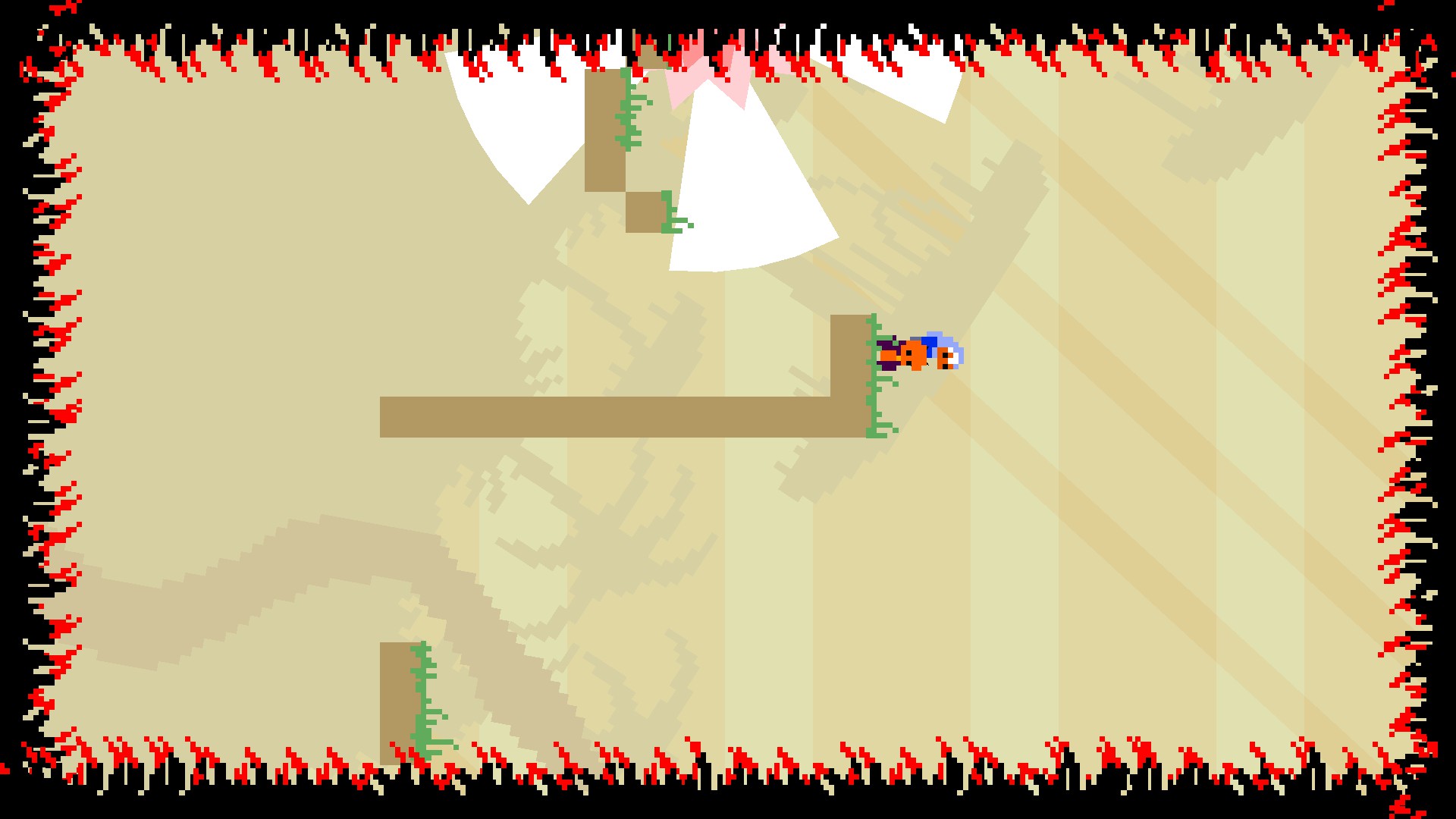 Following up from the original, Electronic Super Joy 2 sees the main protagonist looking to steal Mega-Satan’s golden butt. I suppose he has a bit of envy since his butt isn’t as glorious, so you set off on a journey through roughly 55 levels to accomplish this task. You’ll take down Santa, learn about your troubled childhood, and even find a new family. It’s a rollercoaster ride of emotions with a penchant for killing you at every step of the way.

The gist of this series is really simple: they are brutally difficult platformers. You run, jump, and dodge all manner of horrible obstacles to make it to a goal. Dying will only reset back to the last checkpoint, of which most levels have more than a few to nab. There’s a stark shadow-like art style that gives everything a crisp look while a fiendishly thumping soundtrack begs you to keep going. Different colors stimulate the senses and you’ll be pushed to the edge on more than one occasion.

The main differentiating factor between ESJ2 and the original is the introduction of some new abilities. The first Electronic Super Joy was so snappy and fun because of its “Stomp” power, which would send you slamming to the ground with the press of a button. For 2, the power-up makes a return and is joined by the likes of an “Air Sword,” an “Explosive Jump,” and all manner of multi-jumping (Double, Triple, Quadruple, etc.). It doesn’t greatly expand the gameplay but does set up some new possibilities for level design.

For example, the Air Sword will shoot you towards what you’re looking at. Certain challenges will have you flying through the air and dodging spike traps while making split-second decisions on where you go next. It can be exhilarating, but it doesn’t play well with the insanely tough difficulty curve that Electronic Super Joy is known for.

In fact, basically everything in ESJ2 is just much harder than the original. I’ll never claim that the first game was a cakewalk, but it seemed to have a better consideration for what made a level challenging versus being just plain mean. In Electronic Super Joy 2, some levels bombard you with so many projectiles and enemies that you’ll end up stuck on a specific checkpoint for the better part of an hour. I wouldn’t call it artificially difficult, because learning the patterns will see you perfect levels, but it’s not exactly fair for a blind playthrough.

There’s also an abundance of auto-scrolling levels, which are annoying as hell. As basically with any platforming game, what makes the act of running and jumping so engaging is how player skill can determine how difficult they want to make a level. In Super Mario Bros, blitzing through a level means making split-second jumps and dodging enemies with near pixel-perfect precision that would see an average player die. Sonic the Hedgehog, as well, rewards getting better at the game by letting one speed around faster than light while knowing where enemies are. Auto-scrolling levels are the exact opposite, almost punishing one for wanting to take the game at their own pace. 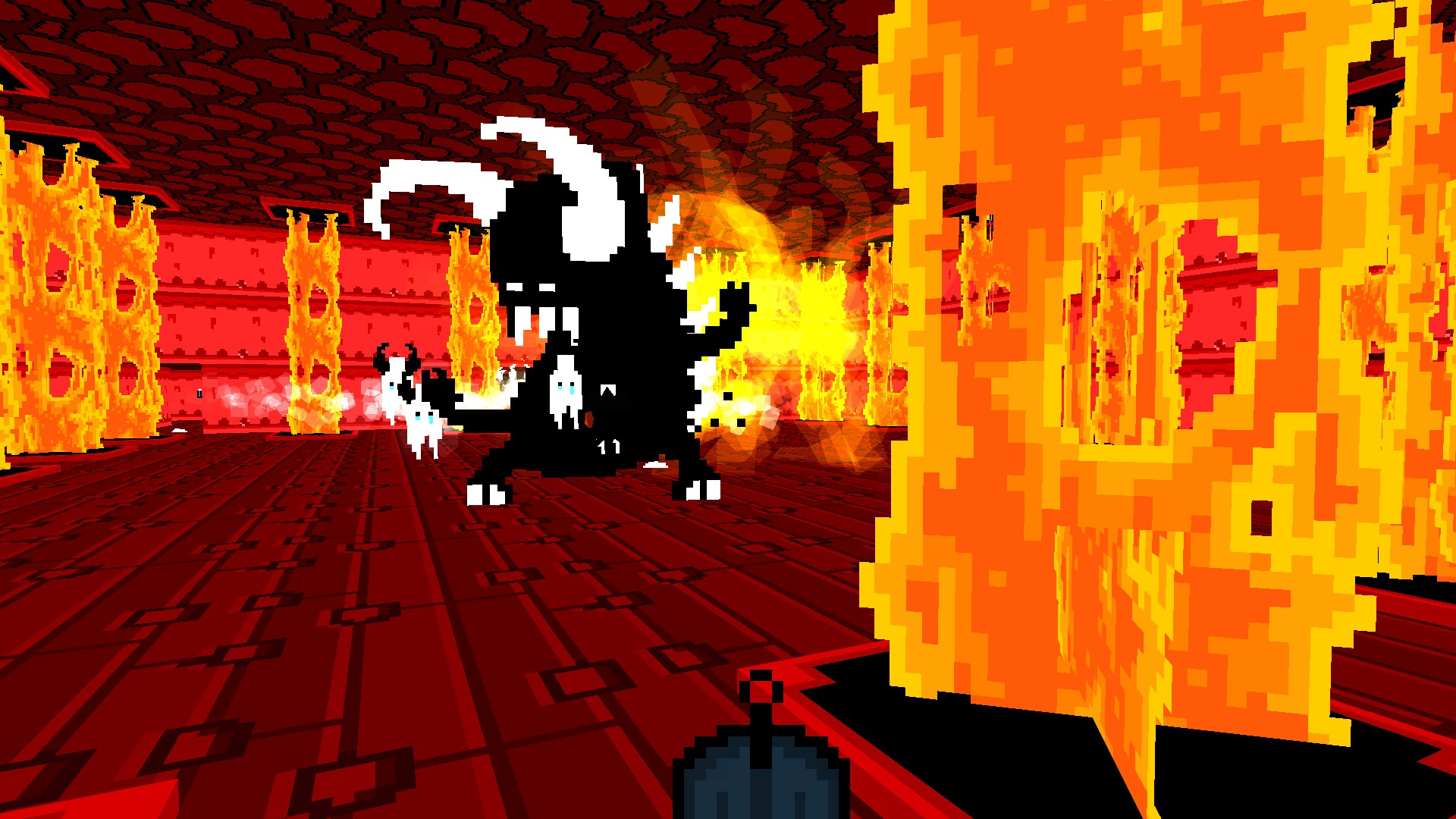 It doesn’t help that the checkpoint system here kind of defeats the purpose of these segments. If you’re doing so well that you’re on the far right of the screen, you can nab a checkpoint before it even appears and kill yourself, thus speeding up the level. That also removes all of the obstacles that might be following you, such as homing rockets. It’s very odd that a checkpoint system would make the game easier, but that is often times the case in ESJ2.

At any rate, the only real problem with the main platforming sections is that they haven’t evolved much beyond the first game. Some of the concepts from the original are even reused here, such as running on slippery surfaces to build speed and make blind jumps. The newer power-ups don’t get that much use, either, which means the majority of levels are simply more of the first game. It’s fun enough, but it never quite shakes the feeling of “been there, done that.”

That is, except for the first-person shooter segments. I’m not exactly sure what the design ethos was here, but Electronic Super Joy 2 has roughly eight levels that resemble Wolfenstein 3D. They are also completely awful, lacking in weapon feedback or enemy animations. In a stark contrast from the main game, you can suddenly take multiple hits, but you can’t really tell when you’re taking damage. 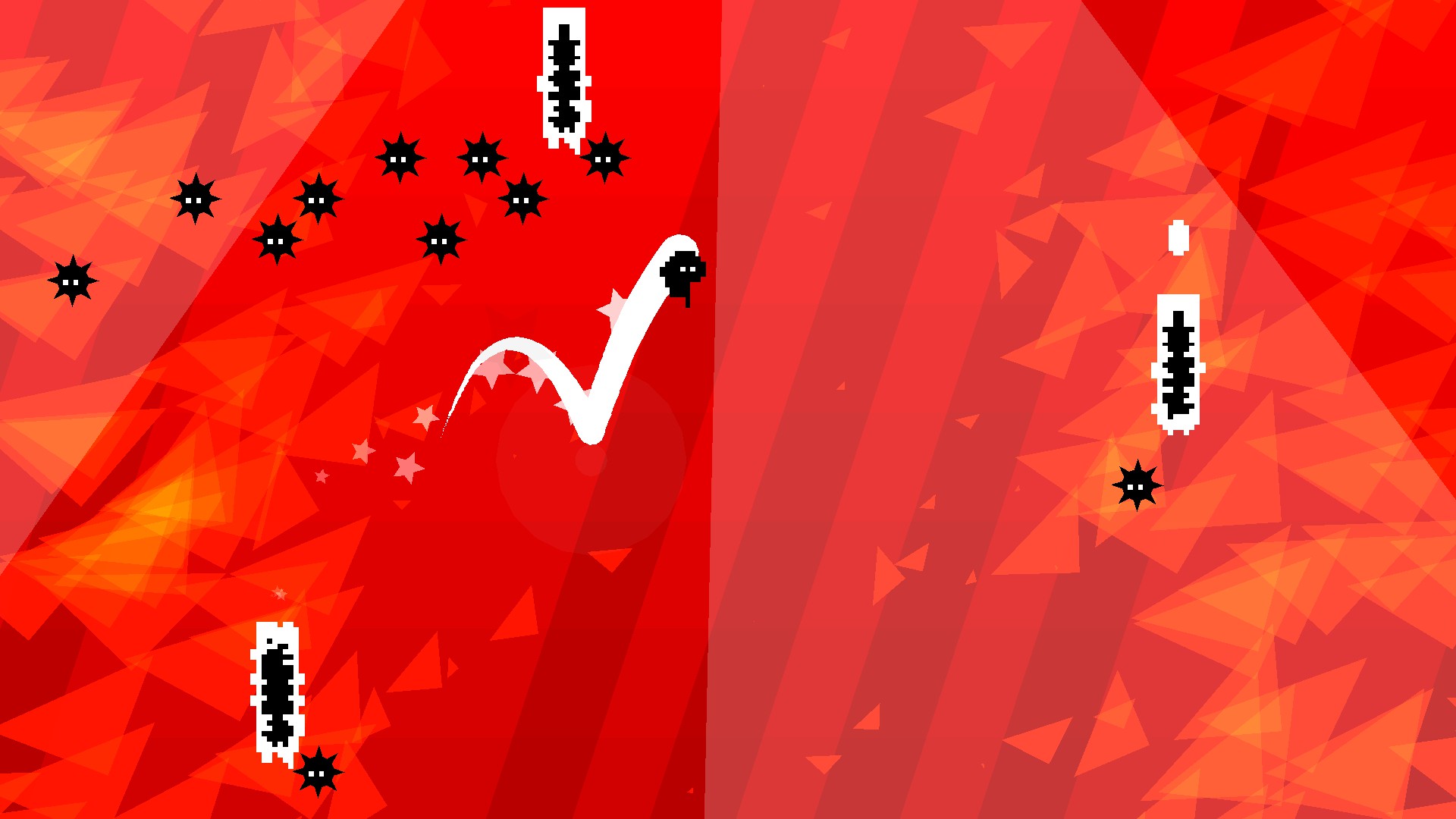 You’re given access to two weapons, though it’s never really clear when you’re damaging foes. Oftentimes it makes more sense to just speed past everyone because you’re not required to kill enemies to open doors or even collect keys. It’s like a mad dash to the exit, which almost defeats the inclusion of these levels. Worse still, a boss battle caps this portion of the game off and it’s just frustrating.

Thankfully, the bosses in the main game aren’t that bad. I’ve noticed this pattern where difficult platformers like Super Meat Boy and Electronic Super Joy throw in boss battles that completely go against the core philosophy of what makes the game so enjoyable. The bosses Team Meat concocted are a prime example of that and even the original ESJ had a gloriously frustrating finale confrontation, but ESJ2 manages to ease up a little here. The first boss is a real kick to the teeth, requiring pattern memorization on the fly that will see you repeatedly die, but every other boss is lenient.

Santa, for example, requires you dodge things while slamming into him with the Air Sword power-up. It plays to the strengths of what makes ESJ2 fun and his health bar isn’t so ridiculously bloated as to pad out the battle. The final boss is also a big chase scene, which is fun and peppered with a smattering of checkpoints to alleviate frustration. I’m surprised, too, because I had expected them all to be ball-busters after years of dealing with poorly designed fights in similar platformers. 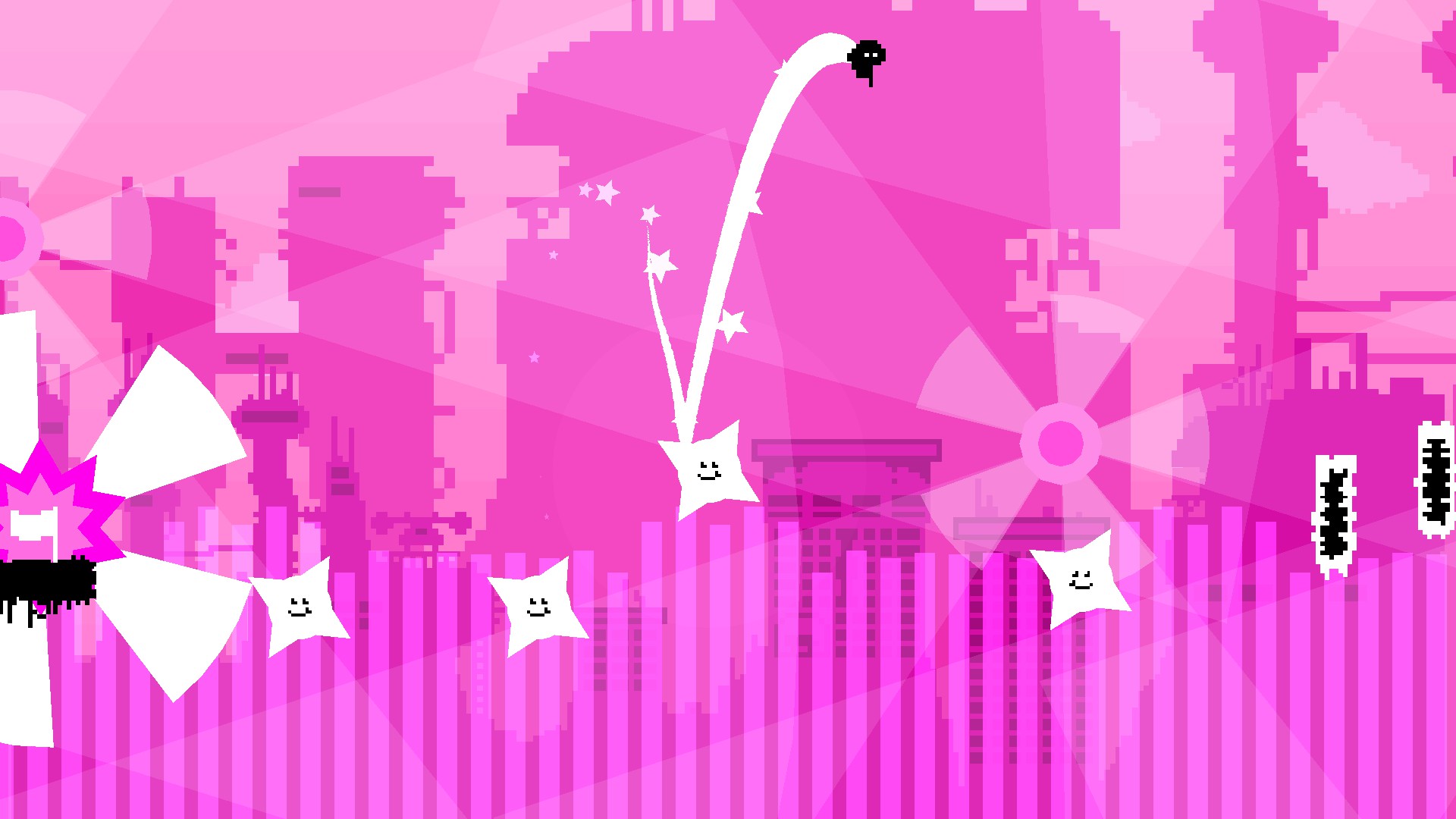 Once you finish that, though, the game just sort of ends and you’re left with not much else. There are bonus levels that really start to tweak the formula a bit, but they feel like too little, too late. They also don’t unlock anything for you, but it’s mainly hard trying to figure out where they are on the game’s map screen. Scrolling through levels sees the screen rotating around and I have to wonder why a style like the first game wasn’t used here. It seems to tweak what worked simply to be different instead of enhancing anything.

A lot of these complaints are going to be addressed in subsequent updates, though. Michael Todd has already started work on improving the FPS segments and the map screen is also set to receive an overhaul to make it more standardized. I’d be remiss to call this game bad because of two design choices that don’t really affect the whole package, especially when they are going to be fixed.

Ultimately, though, I’m just not as smitten with Electronic Super Joy 2 as I was with the first. The free price tag makes this a lot more palatable, but I do believe more could have been done here. It’s a little disappointing, but still a fun time that fans of the first are sure to get something out of. Just don’t go in expecting anything dramatically different.