Take a bow, Mr. Nolan, and cue the applause

Christopher Nolan is a well-known name. As modern-day filmmakers go, his name is near the top of the list of directors studios will trust with boatloads (literally in this case) of money to bring projects to life. Strange then, that in many marketing materials Nolan’s name has been conspicuously absent. In interviews, Nolan discussed that while he’s had the idea for Dunkirk for more than 20 years, he opted to wait until he had this sort of clout with studios to make the film, and, well, it paid off.

Even as I watched, I knew this was a very different sort of film and one that doesn’t draw easy comparisons with other movies, even other war movies. Perhaps the most obvious recent comparison would be to 1998’s Saving Private Ryan, owing purely to a concurrence of beach scenes taking place in World War II while tensions run high. But that’s an over-simplification that does Dunkirk no justice, as it is standalone one of the best films you will likely see.

Dunkirk tells an early, yet historic story from World War II when Allied (then only British and French) forces are being pushed back to the sea centering around the town of Dunkirk. The film opens, effectively, on a group of soldiers walking through abandoned French streets when fliers begin to rain down from above. One of the soldiers grabs one and we’re treated to a glance of what they see; that is, a German advertisement encouraging the Allies to surrender with a graphic map detailing how bleak their situation is. It’s a somber tone-setter which is quickly augmented by the realities of war as a soldier grabs several out of the air in an attempt to collect it for toilet paper. And then, things get chaotic, and never really slow down. Despite several attempts to void his bowels, this solider, our soldier, Tommy (Fionn Whitehead) never clearly gets to. The act of surviving becomes so all-encompassing that it’s to the point where his body forgets it needs relief.

And that’s the point: an experience so immersive that nature’s calls go unheeded: literally everything but survival is forgotten. It’s no accident that immersion is at the forefront of the piece. The action is tightly wrought, like floss wrapped round your fingers too many times: the blood continues to pump, but has no where to go; the flesh turns white; and sensation builds as numbness should set in. Nolan designed the film, from his insistence in shooting film rather than digital, to the carefully orchestrated score by Hans Zimmer (simply amazing), to the avoidance of digital effects and the minimal quantities of dialogue to be immersive. 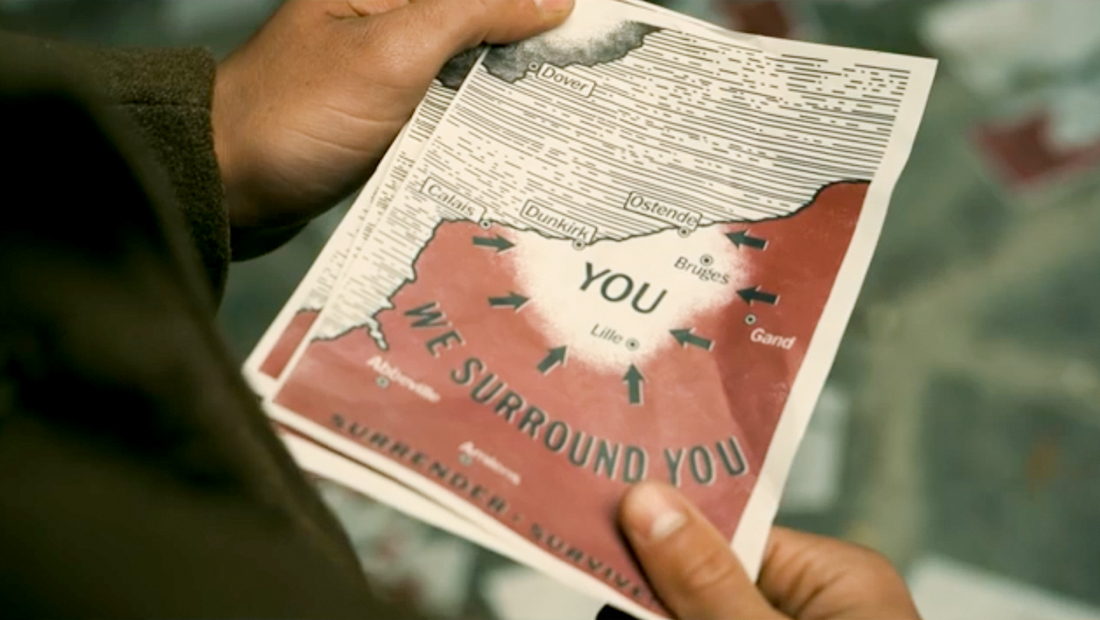 If you were to pass Christopher Nolan on the street today and shout out at him, “Hey Chris! Where should I go see your dope new movie Dunkirk! Dark Knight rules!” He’d probably yell back, “Hey asshole, you don’t know me!” Or just pepper-spray you in the face. But if he deemed you with a response, he’d be sure to recommend you take the time to find an IMAX theater showing Dunkirk with a film projector. It’s how he intended audiences to see the film. Film is known for feeling more real and alive. And IMAX film formats not only capture more information, but the screen size allows more to be displayed, and using film projectors does this best for the format. Couple this with the use of real, true to life and ‘historically accurate’ warships, fighter planes, and props (like scale models and stand-ins for large group shots) and you have a movie that pops off the screen like few others.

There’s a shot from above of three British Royal Airforce fighters flying in wing-to-wing formation that was one of the crispest, most real feeling moments I’ve ever seen that I wanted to screen grab live because I knew nothing I could share in a review would do it justice. This is a reference shot, but it’s a poor imitation of a cheap knockoff.

It’s true, not everyone’s going to see it in this format–which is unfortunate, but if you’re wondering if you can, it turns out Dunkirk‘s website will help you figure that out. Search here to see if any 70mm showings are near you. If they’re within driving distance, I’d consider making the trip: it’s that worthwhile. 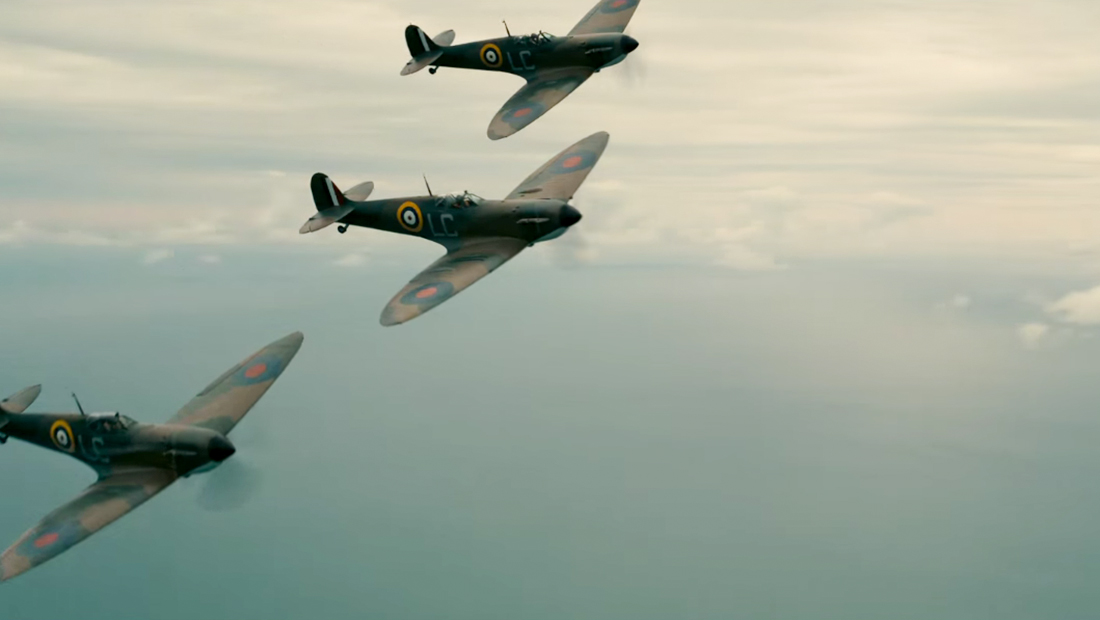 The experience was so immersive I failed to recognize both Kenneth Branagh and Tom Hardy (in fairness, his face is obscured for most of his screen time). I was actually lauding Nolan for going with relative unknowns entirely. Cillian Murphy does make a cameo (an early Nolan collaborator from Batman Begins), but it felt well-incorporated and didn’t jar.

The lack of dialogue didn’t jar either; it served the purpose of letting the action and tension dictate emotional response and immersion. The film’s a triptych, with three non-linear sequences taking place on land, air, and water. Yet, despite this, our lead, if you can pick one out, Tommy, doesn’t open his mouth to speak until something like 30-40 minutes into the movie, outside of a single word. The dialogue is noticeably reduced and it worked so well. There are no grandiose speeches, no overblown discussions on politics or course of action that can bog movie paces down. It’s frenetic. From the first time shots are fired, the pace of the movie builds and carries until the finale. This is all done without enemy soldiers ever really appearing on screen, and with the violence and horror of war (which are quite viscerally present) not being exploited for gore or shock value.

The reality is one in which every person present accepts that they may very well be killed at any given moment, but still operate within the rules of their world while best trying to survive. With the pace not waning, these rules are eventually put to the test and war stretches conventions to the point they break when individuals survive. Yet in spite of that grittiness, the film focuses on sacrifice and the willingness to put oneself at risk for others. These moments pile up throughout the film so that bleakness is balanced with inspiration and grief with triumph. It’s a movie about a retreating army, a defeated group (at least for the moment) that achieves victory through survival, with the one most-noted casualty coming from the unlikeliest of sources. War turns conventions, much as Nolan’s committed filmmaking does, and in one microcosm within this microcosm, we’re reminded that heroic deaths need not be grandiose, they only need conviction behind them. It’s incredibly resonant.

In reviewing this film, I find myself hard pressed to compare it to others. It’s a standalone. I say this, knowing that Nolan took inspiration from a variety of sources (for inspiration on total settings in war movies to inspiration for pacing and tonal setting in movies in general). And in trying to score it, I only know that it has no real failures: it is a great film, one that just far outstripped its other summer competitors.