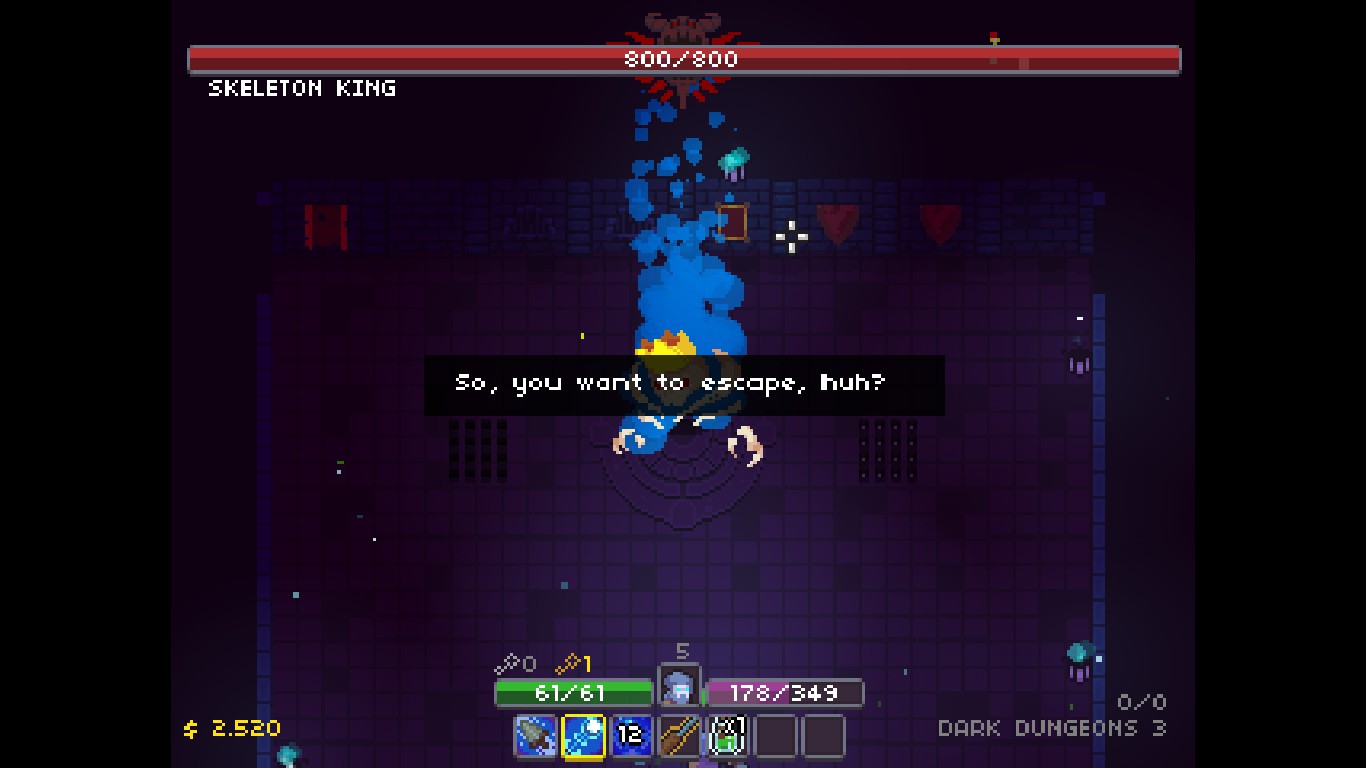 Heavy on Dungeon, light on Soul

I have conquered the first level of Dungeon Souls. Its boulders and explosion-traps were ineffectual; its skeletons and bats (who are also skeletons!) have been reduced to glaringly bright coins and shards of bone. I have activated the last mark, and the portal has activated.

“THE REDEEMER HAS ARRIVED,” the screen declares.

As the gigantic spectre rushed across the screen, filling it with projectiles, my first thought was, “Oh, it’s basically the Spelunky Ghost.” 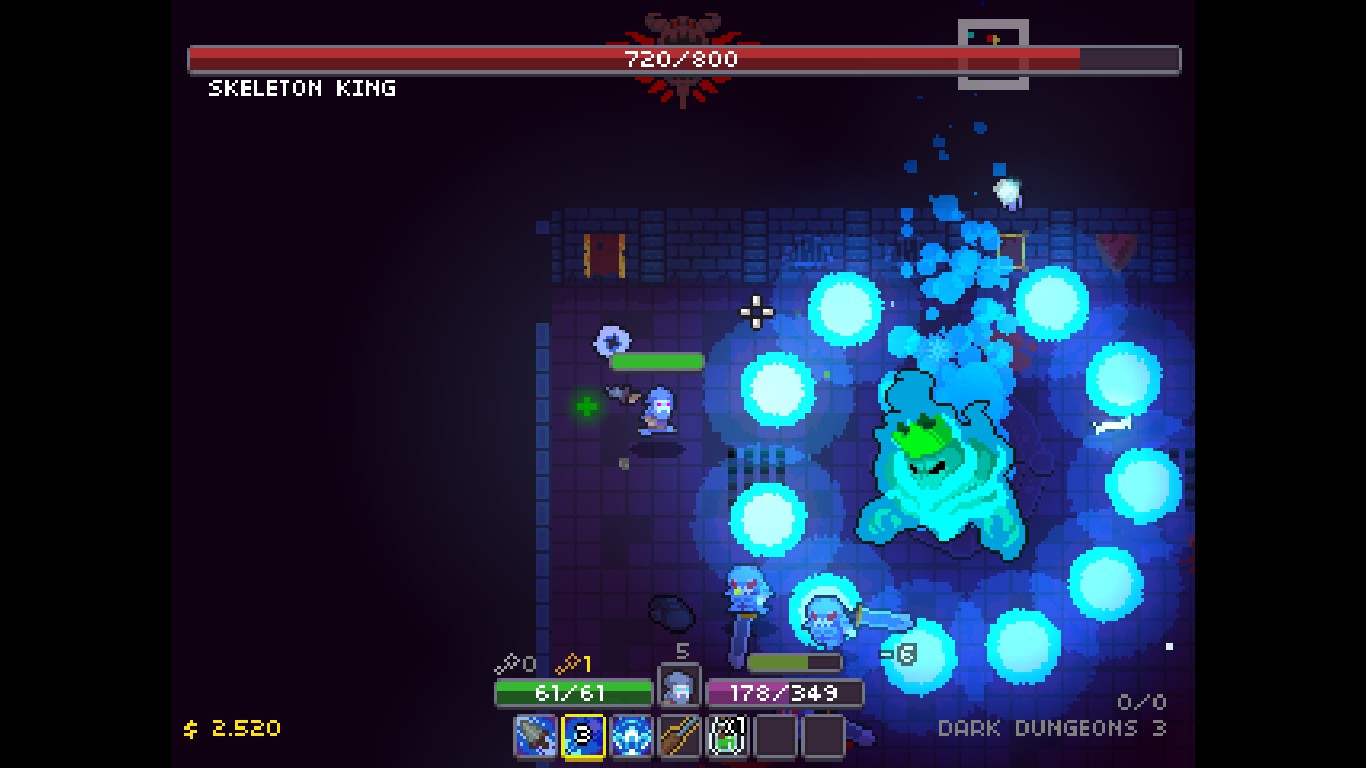 This thought process, I feel, aptly summarizes Dungeon Souls, a foray into the action-roguelike subgenre by Lamina Studios. Much like how its name is meant to capitalize on the popularity of From’s Souls franchise, Dungeon Soul‘s plays like an amalgamation of the genre. As I was playing, I couldn’t help but constantly notice similarities in the game’s elements to those from its popular brethren – the ghost of Spelunky, the items of Risk of Rain, the level structure of Nuclear Throne – and so on. All said, that might not be a bad thing.

Picking from one of ten heroes (only three are available to start, the rest are unlocked through various means), you spawn into a procedurally-generated dungeon, the theme and enemies of which changes after each boss battle (every few levels, à la Nuclear Throne). Regardless of theme, the goal is always to activate all of the ritual markers scattered throughout the stage, in turn activating the portal to the next stage. Each marker will spawn a small horde of enemies when touched, creating more than a few hectic moments where a boulder chasing me down a long, narrow hallway drove me right over the marker, spawning enemies and leaving me nowhere to run.

Monsters will also spawn at random throughout each level, and are usually extremely aggressive, with skeleknights and yetis attacking on sight, necromancers that run and hide to animate more enemies, and enemy spellcasters setting the screen awash with bullets. While this can reduce the tedium of backtracking across the stage, it also led to more than one instance of me being killed instantly as an enemy spawned on top of me.

The layout of each dungeon is pure procedural generation, for better or worse. This usually amounts to the game creating rooms out of various-shaped squares and rectangles, varying the size by smashing them into each other without intervening walls or adding narrow corridors. In addition to destructible projectile traps, there are floor traps, helpfully marked by a red target. At first, I was confused as to why I only saw these along walls, and almost always in corners. 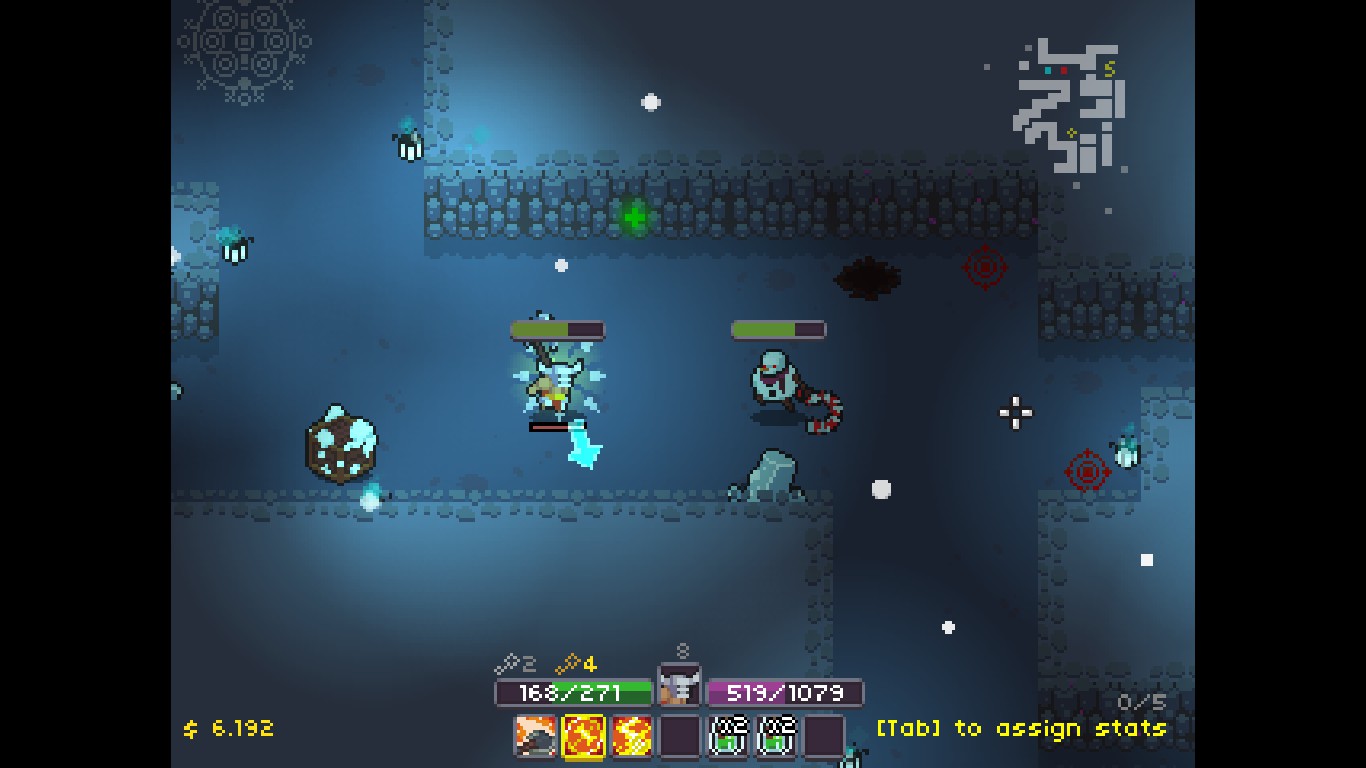 This is a programming shortcut to make sure that the floor traps will appear in as many corridors as possible – as well as in ritual marker rooms, where the amount of enemies and debris make it easy to lose sight of the trap markers. Thus many of my runs were ended at the hands of an explosion or an insta-kill rolling boulder, triggered as I dodged around the room’s inhabitants.

The placement oddities continue in the form of its items. There are a lot of items in Dungeon Souls (looking similarly to the item sprites from Risk of Rain), and to the game’s credit, a lot of them are very useful; extending from basic stat-boosters to life-stealers, eyeballs that shoot fireballs, shields to block bullets, or even items to make your foes explode on death – it’s all here! That said, chests are placed entirely at random in the dungeon, as is the shopkeeper, who is present on most levels. Unlike other titles, this shopkeeper can be found with enemies swarming nearby, blissfully unaware of what is going on around him, acting as an invulnerable shield for enemies behind him.

Chests will often spawn intersecting with the shop’s items, as will dropped items from monsters, and there is no way to distinguish between the two. Even more vexing are the secret levels. Objects will sometimes appear to warp you to the aforementioned levels when you possess the correct item. The problem is, it can do so from about half a map away, and activates with the same key to pick up items. It took about six warps to the game’s first secret level to finally figure out why I was suddenly switching levels while opening chests and buying items from the store.

If one thing stands out in Dungeon Souls, it’s the character classes, which all feel distinctive and enjoyable to play as. All have a basic attack, which may be physical or magic, ranged or melee, as well as two side abilities. With so few powers, it’s good that each adds significantly to gameplay. Most (but not all) have an area-of-effect damage ability, along with a more utility-friendly one. 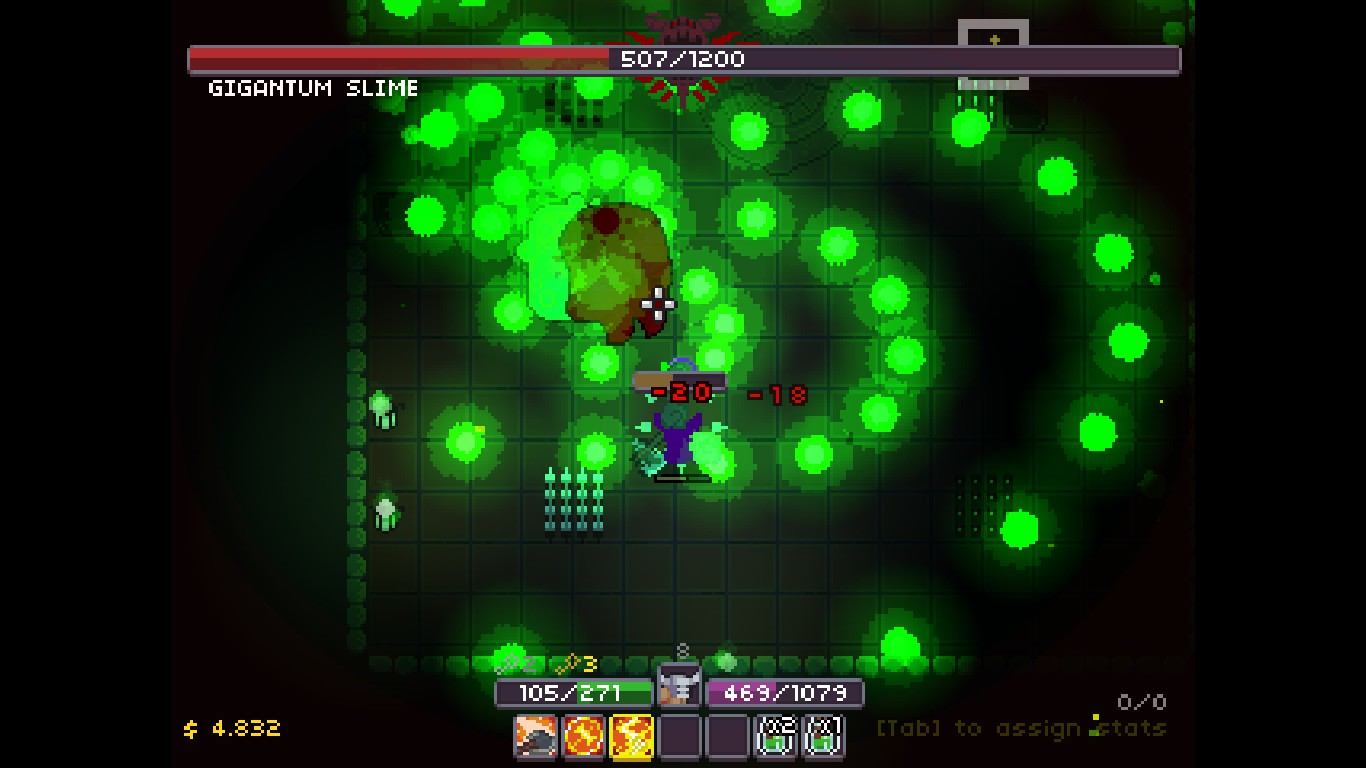 The Barbarian is a strong physical melee class, with a ton of health, that can either throw a thunder axe for AoE, or speed himself up to wipe out enemies in a hurry. The Cleric, on the other hand, is a magic ranged class who’s projectile bounces off of walls. Sure, he has a self-heal, but he can also set up a barrier that splits his spell into three when fired through, prompting a little more strategy. By strategy, of course, I mean filling the screen with bouncy death.

Despite the variety and fun of each class, the game still manages to take a step back. You, see, Dungeon Souls likes to fashion itself a bit of a bullet hell title (in the vein of The Binding of Isaac), with some ranged enemies and every boss being obsessed with filling the screen with waves of bullets. Melee characters have to be at point-blank range to deliver their attacks, monsters only rarely telegraph their attacks (those that do seem like an afterthought), and the game contains no dodge mechanics. I’m glad you can gather up to six health potions, because you’ll need them all the moment you need to survive all of that. It’s not that melee characters are useless, it’s just that the game didn’t seem to actually take how they play into account.

Making all that dodging and smiting more difficult is the mixed bag that the game presents visually. Environmentally, it’s a mostly-bland set of tilesets that blend together, with props and slight color changes to differentiate dungeon from sewer from devilish lair. By comparison, the heroes and monsters are detailed enough to be consistently entertaining to look at. With the exception of an outdoor Tundra theme, all of the levels are incredibly dark, with only a small glimmer around your character. I couldn’t help find this annoying, since enemies and traps were just as visible as ever, it only served to increase my eyestrain. In contrast, coins, projectiles, and other particles that hover over the landscape do so with retina-searing intensity. 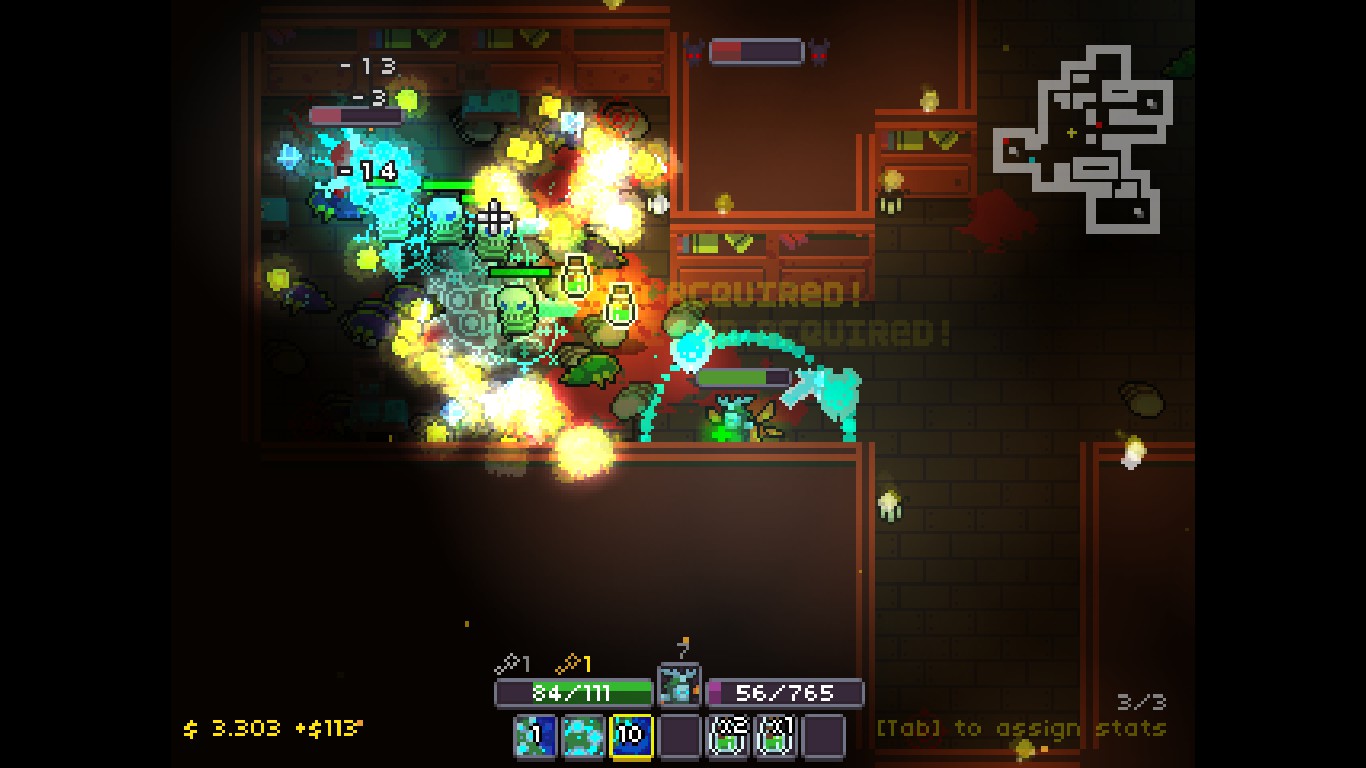 Dungeon Souls proudly wears its inspirations on its sleeve (and its Steam Store description), a mishmash of inspirations that takes a step backwards even as it steps forward. Yet, despite that, it still manages to create a tiny universe of its own, full of engaging heroes and tenacious foes. It’s a fun title, but when you have so many standout games that you can combine them to create something like Dungeon Souls, it’s hard not to recommend those instead.