Out of its depth

It’s amazing how bright the ocean can be, and yet still be so accursedly dark. My searchlights barely cut through the murk, and the shadows of ancient hulks say I have no place down here. My sonar pings off of an even bigger wreck, a tiny glow on its deck. Was this what I was looking for?

My ship shakes as cannon fire upon it, my HUD flaring the angry red of an imminent torpedo barreling down on me. There is no time to dodge. I slam “ascend” and hope I make it back to base.

The damn crab lied, it wasn’t better under the sea at all. 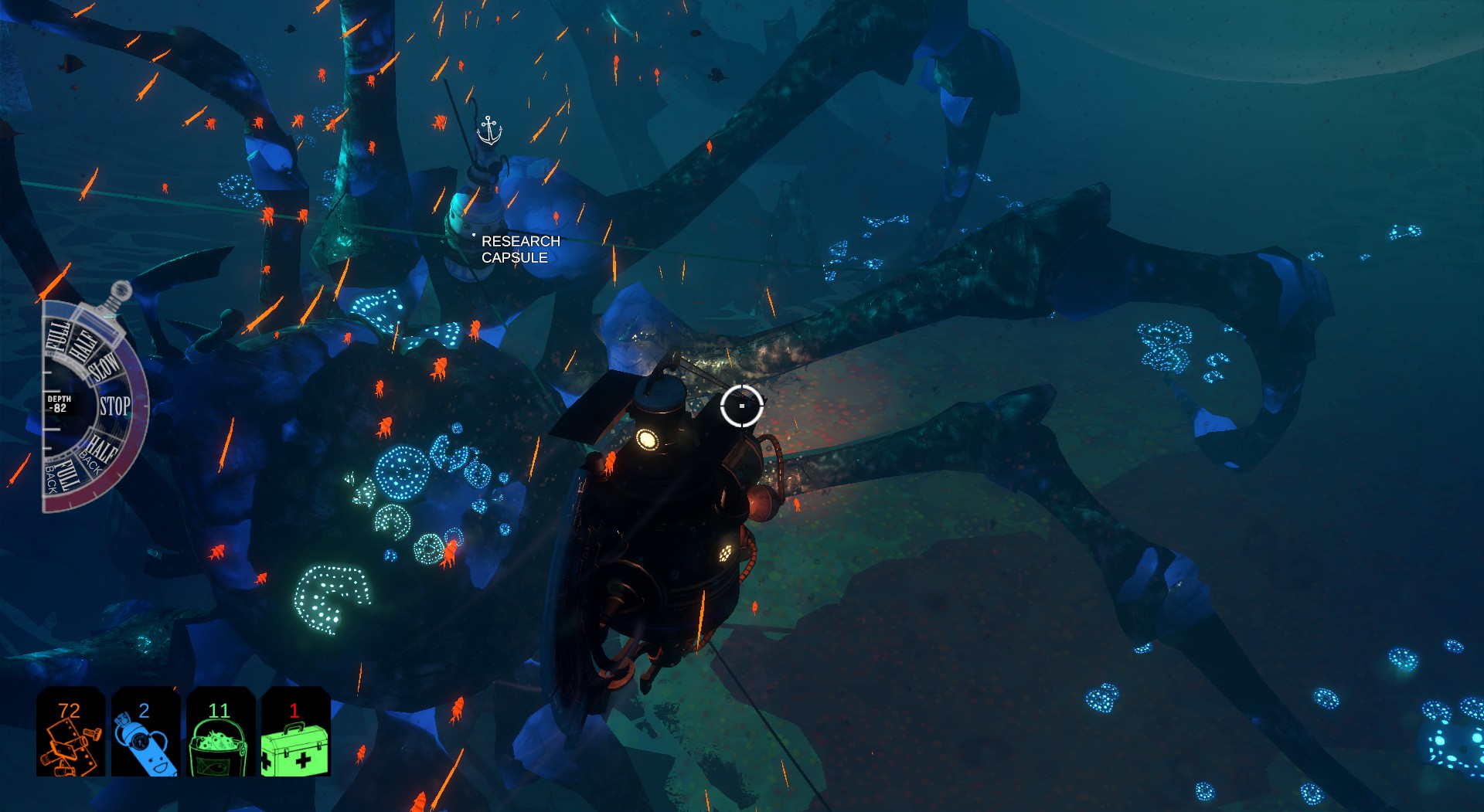 Given our fascination with exploration and alien landscapes, it always baffles me why so few games take place under the sea. Newcomer Arachnid Games tries takes a stab at it with Diluvion. Thrust from their land of plenty, humanity has been trapped deep underground – and underwater – for what appears to be hundreds of years. Legend has it that this was done by the gods themselves for Man’s hubris, but the god Sul, in its mercy, placed an item at the bottom of the Endless Corridor… and that item would be the salvation of humanity.

Naturally, as a race, we’ve gone and mucked it all up, and it falls to you, -PLAYER-, to gather your ragtag crew (Tired Veteran, Explosion-Obsessed Girl, and more!), and reach the end of the apparently not-so-Endless-Corridor, hopefully saving the squabbling humanity in the process. The story is vague at first, only picking up once you hit the game’s second map, and serves as a not-so-subtle guide to your explorations, the game’s main focus. By the end, rest assured, you’ll have your questions answered.

At its core, Diluvion is a game of exploration, and it continually nails the sense of wonder, trepidation, and dread that follows in the wake of that. Humanity has been trapped underground a long time, and it shows. Rusting hulks litter the ocean floor, from the size of your tiny starting vessel to massive tankers; cities and dwellings are literally bolted with massive cables to rocks and ice. The physics of the engine may not be good enough to make them sway in the current, but even the largest of structures are tenuous things, often covered in a patchwork of materials. Vessels have a Jules Verne-inspired, pseudo-organic style, taking after various fish. The theme does break a bit as the ships get bigger and more heavily armed, taking on a more directly-steampunk aesthetic. 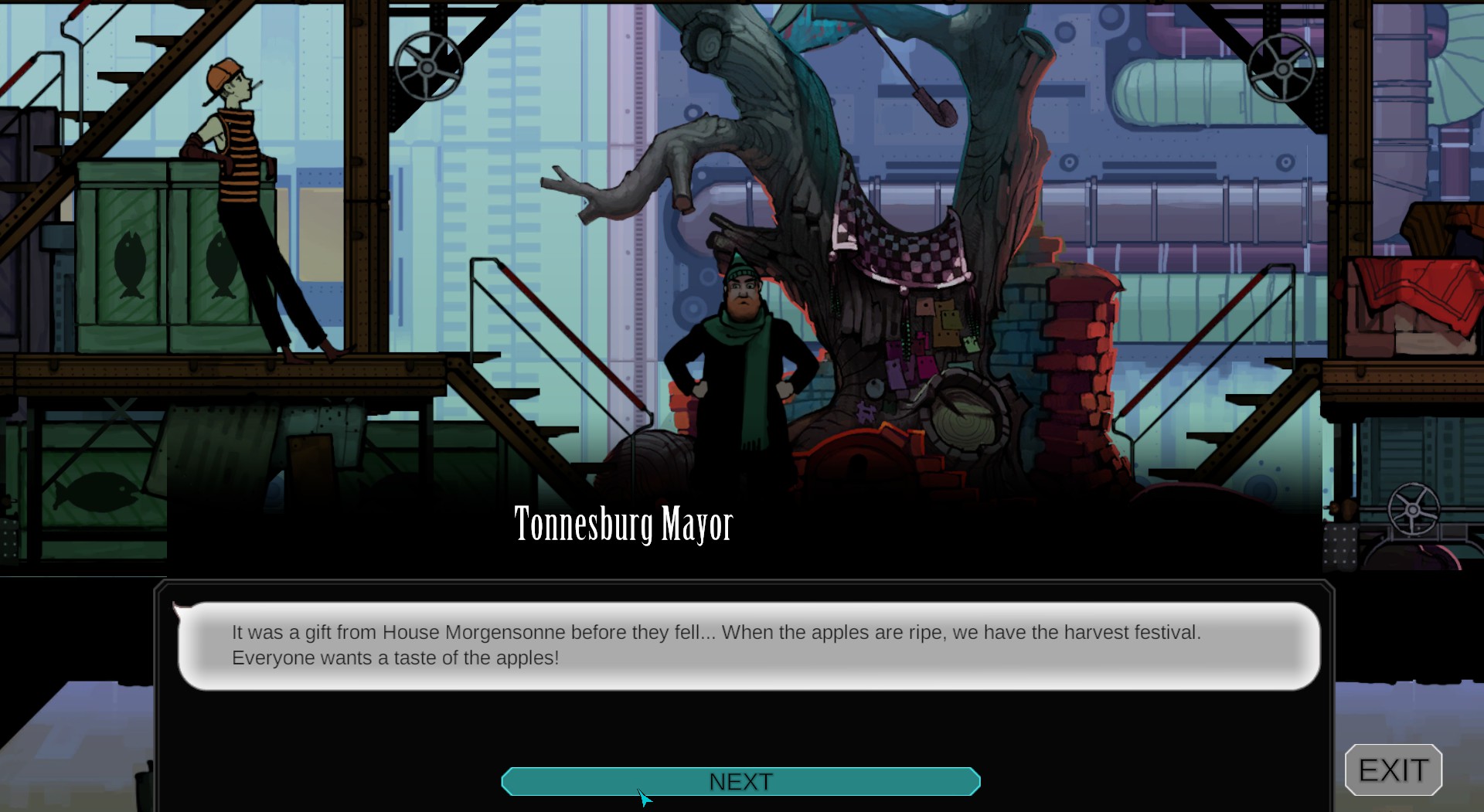 The majority of gameplay takes place in the 3D realm, but as you check your vessel, or dock with something else, it cuts the side away to reveal a 2D view. There’s a lot of asset reuse here, with only a handful of props and character models. You’ll quickly learn the one lootable barrel, the big golden chest that holds a ship’s loot, and so on. Despite the asset repetition, it’s these backdrops that flesh out the slightly-dilapidated, Vernian (that’s a word now) style the game tries to create.

When I said that it’s amazing how bright the ocean can be while still being so damn dark, I mean it. While some areas areas are well-illuminated by glacial ice or bio-luminescent plants, you generally aren’t seeing too far, with only the largest objects appearing as shadows in the distance. This can be awe-inspiring as a new discovery makes itself slowly visible, but it it can also be menacing, as you look up and find the shadow of a capital ship menacing above. 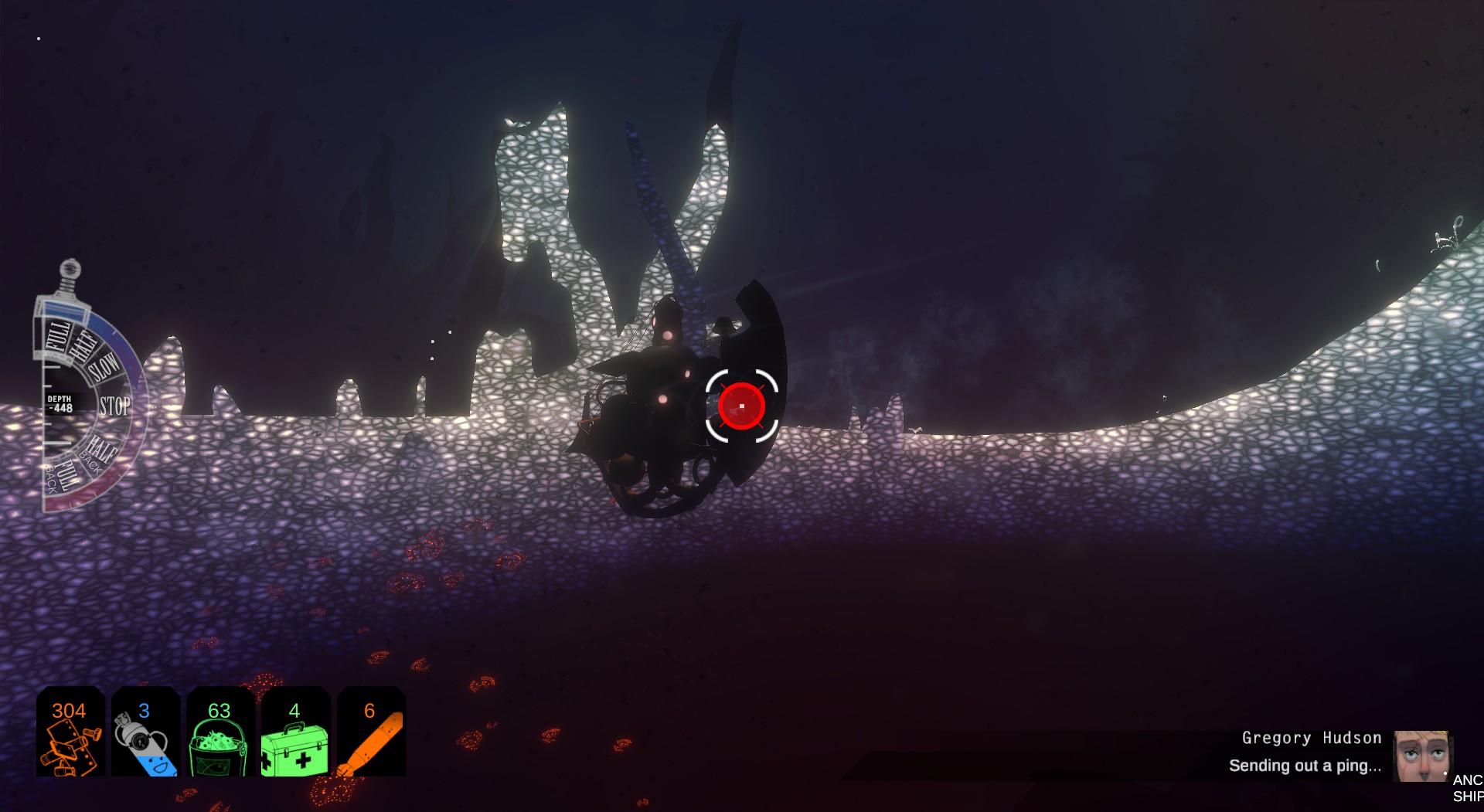 At lower depths, or where particulate is heavy, visibility is basically nonexistent; your only method of sight is sonar. Sonar acts as a wave, briefly illuminating the landscape within a certain range. It also marks vessels, salvage, and places of interest briefly on your HUD, making it absolutely indispensable to doing just about anything in the game. Other ships will not be shy about pinging you as well, and while it might just be trader making sure you aren’t out to get them, a sonar ping could also be the precursor to a torpedo launch.

Exploration isn’t just about sailing around and stealing loot from ruins, or completing fetch quests to finish the main plot (there’s a fair number of them). Your crew needs to eat (although I don’t think they can starve to death), and food – which is expensive – depletes very quickly as you gain crew. It also turns out, just because humanity has figured out how to magically survive for hundreds of years underwater, they haven’t figured out how to breathe it yet. As such, you’ll need oxygen, which is filled completely at towns, or one tank at time from other ships and ruins. The latter is clearly designed to keep you from asphyxiating quite as often, especially with the exorbitant cost of extra tanks… but immersion-wise, it left a strange taste in my mouth. Often I was docking with traders, or ships disabled by pirates who were waiting for help. I was effectively stealing their oxygen! By the end of the game, had I inadvertently doomed hundreds to an early death? 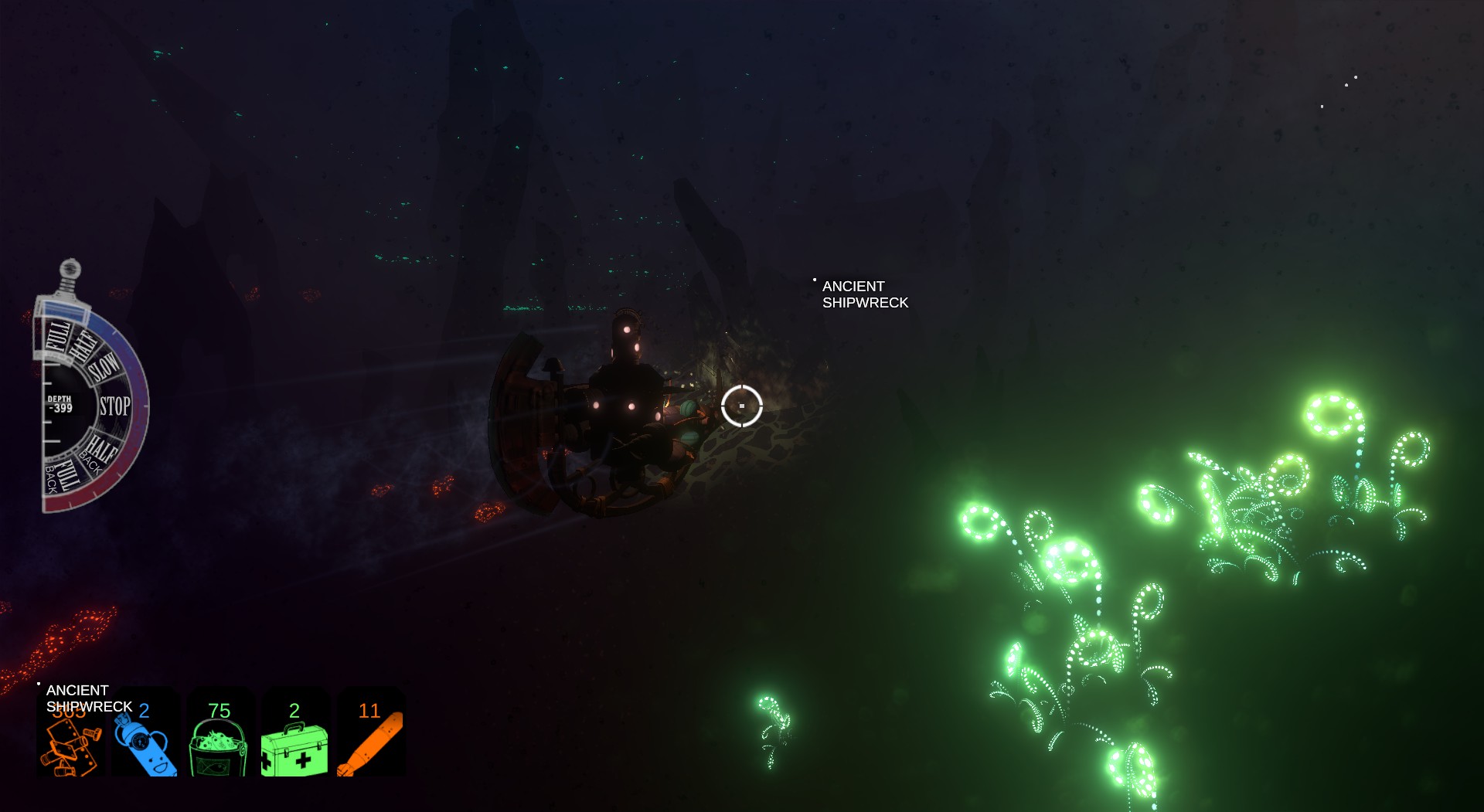 Well, no, but this is the sort of thing I think about.

While we’re talking about sending people to a watery grave, let’s talk about the combat. Armed with (literal) Scrap and, later, torpedoes, you’ll engage with your enemies, usually of the pirate variety. How each enemy fights depends on their type, as well as whether they actively seek you out or not. Cannon combat is pretty standard stuff, with you circling your opponent and leading them before blowing them out of the sky sea. Each ship has a different number of cannons and a different layout, but won’t actually tell you the latter, so it takes experimentation to figure out your own blind spots. Combined with excellent lighting and sound design, there’s a meaty thunk to your cannon fire.

Torpedoes are a more strategic affair. And by strategic, I mean powerful and cowardly – and thus, preferable. While you can hit enemies with a close-in torpedo, why do so when you can from far away? The range of a torpedo is the range of your sonar’s ping – but there’s a chance they’ll explode partway there, and can also be blown away by enemy fire (and by your own). 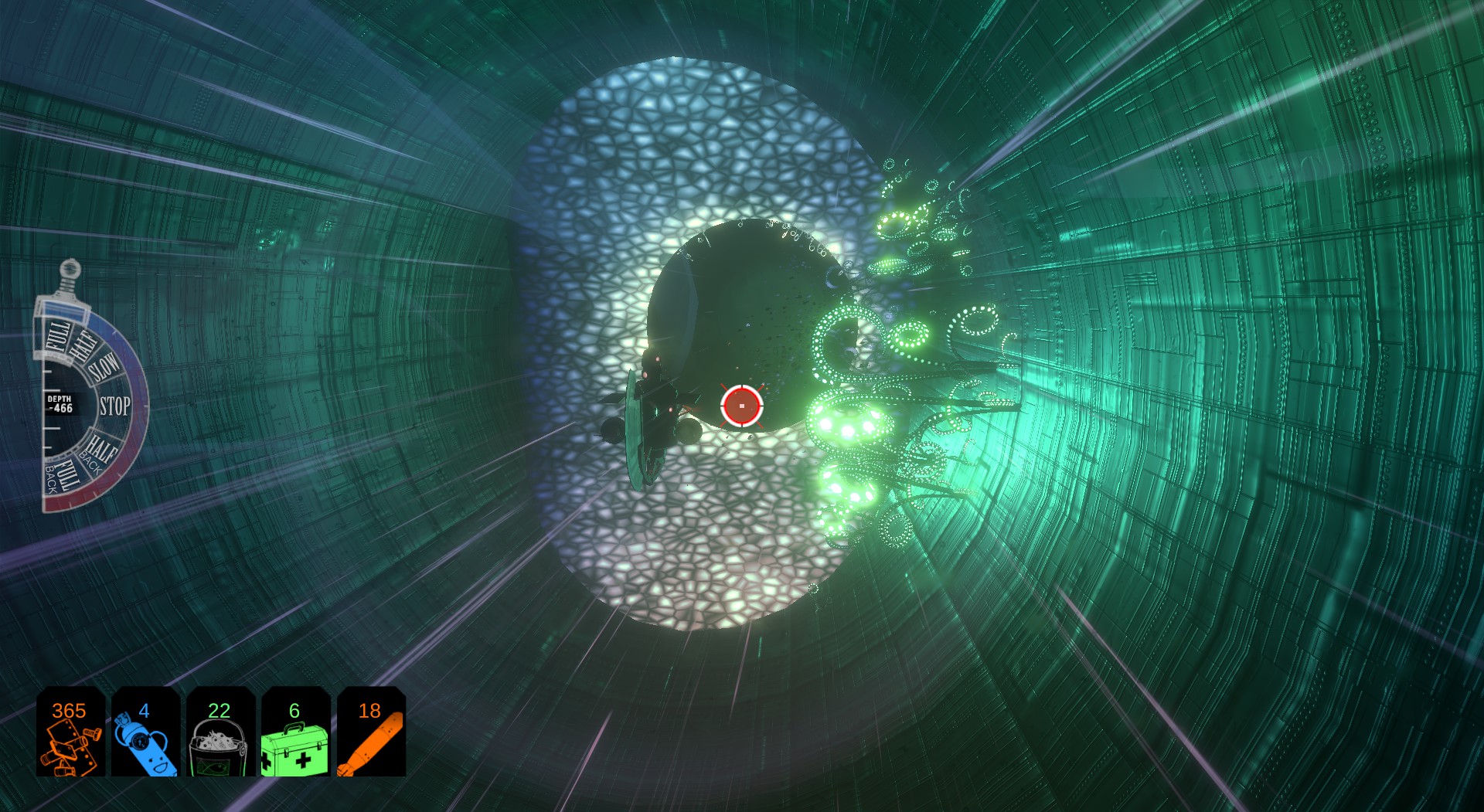 On paper, combat works well. Boss battles are impressive affairs, although the fact that they’ll respawn upon map change or reload lessens their later impact. Once you get more than a few enemies next to you, or you’re in an enclosed space, you’ll see the true terrors of the deep; unintuitive controls married to an awful camera.

You see, you have two control schemes in Diluvion: Arcade and Simulator. Arcade is what the game shipped with, and it shows. Your sub moves organically, and it’s a lovely sight to behold as you twist and turn, following the mouse like an agile fish. But that’s the problem – you follow the mouse. You can’t turn to look without also turning your sub, so you can’t see anything around you, and have to more or less ram your enemies. The turn buttons, ascend and descend keys? All useless.

Simulator, by comparison, is the compromise released days after release, and is your more traditional WASD-control scheme, with a camera that moves independently of the sub. You would think this would be preferable – and it is. Except your sub is as graceful as a bloated whale, and your camera is drunk. Since the camera is no longer at a fixed angle, and there’s no way to zoom in or out, if you’re near an object, you will likely end up looking directly into a wall, or into the back of your sub, totally blind. 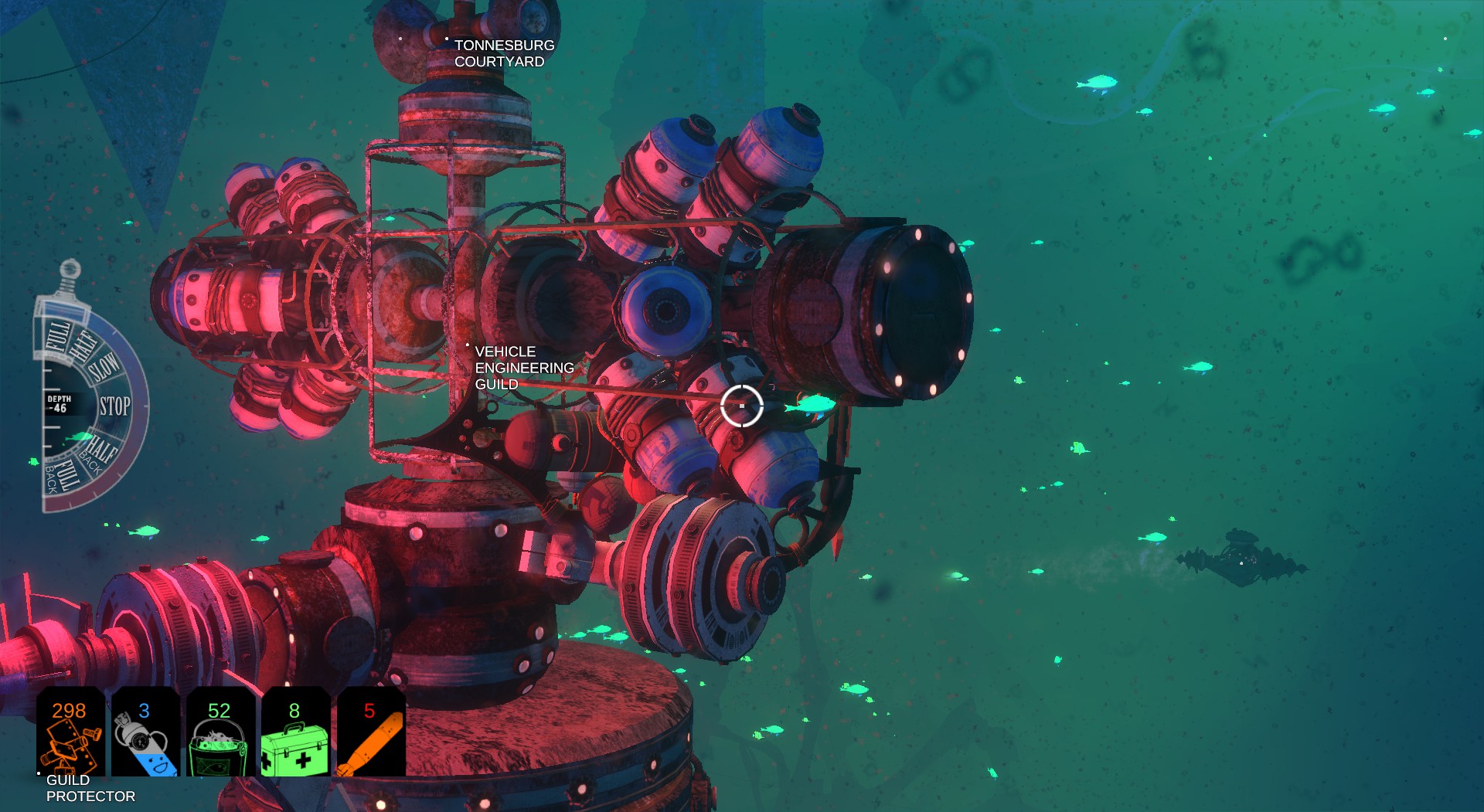 Could this get more awkward? Absolutely, because there are bugs. Lots of bugs. Beautiful golden fish that act as a waypoint system, but may not activate. Quest triggers can be activated ahead of time, and sometimes enemies on kill quests will actually wander away, forcing you to reload. My personal favorite is that quest dialogue will repeat every time you reload. Every. Time. If there’s a saving grace to this, it’s that the dev team seems genuinely interested in fixing these bugs, and I hope this interest is sincere.

We don’t have enough undersea titles, and much of the game was a delightful, and sometimes even breathtaking experience. Yet, the parts that weren’t were an exercise in futility and frustration – I can’t remember the last time I had to go to a game’s forum to get a bug resolved just so I could advance. It’s a lesson in wonderful concept and poor execution. If you were looking for the next Subnautica or Sunless Sea, this isn’t quite there.