Dead Rising did the impossible when it was released in 2006, at least in my circles — it ushered non-believers into the open-world format. In an era before zombies were in every other game or television show, Capcom returned to the formula it had utilized in the Resident Evil series but provided a new spin to it, instead focusing on the “horde” mentality and going full camp rather than a horror tint.

It was wildly successful, but underneath lurked tons of obtuse design choices that turned a lot of people off. Those exact same decisions persist in the HD remake, but that hasn’t stopped me from loving it all over again. 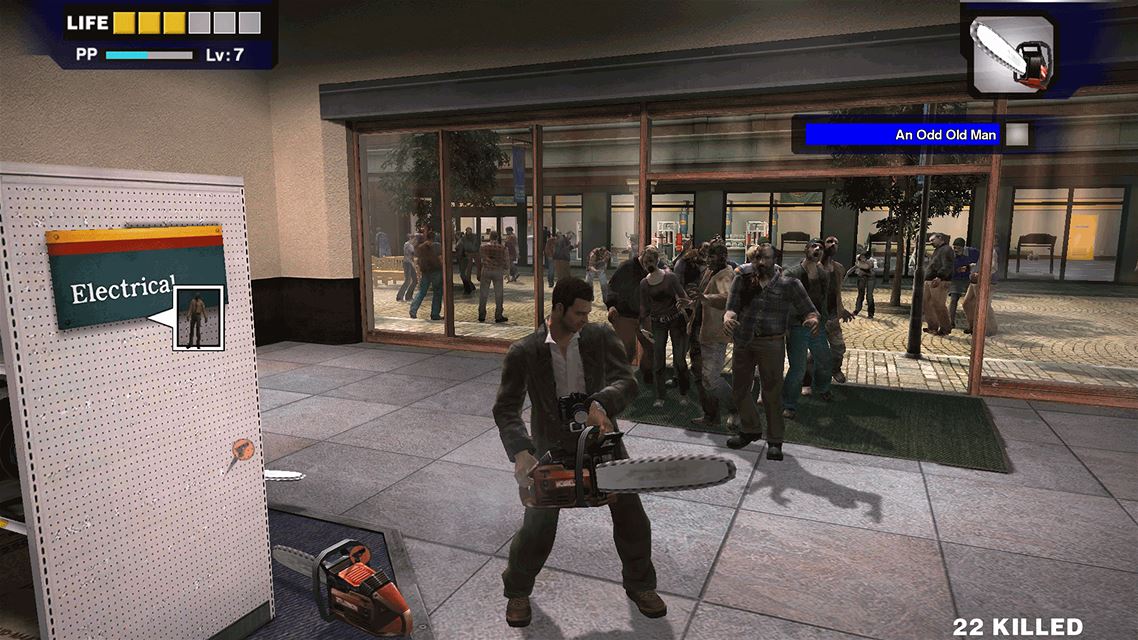 Once again, Frank “I covered wars” West is stuck in Willamette Colorado, and must uncover the mystery of its zombie outbreak while fending for his life. Yes, it’s the same exact game content-wise as the one you played a decade ago, with some light DLC costumes added in for good measure. So if you played the original a few times and hated it, this remake will literally have nothing for you.

Yet, no one can really argue against a 1080p and 60FPS upgrade on consoles. For a horde-based experience it’s imperative that the game actually runs without chugging when there are tons of zombies on-screen, and lo and behold, I didn’t really notice any drops during my playthroughs. It’s no magic wand though, as Dead Rising hasn’t received a complete visual overhaul and does look more dated compared to its successors. The Willamette Parkview Mall doesn’t hold up nearly as well as Fortune City in the sequel on an aesthetic level, but the character designs and insanely detailed shops are all intact.

I completely forgot how granular this game was, from all of the individual items laid out in each store to the costumes to the weapon system. Sometimes, I’d spend 30 minutes in a juice shop mixing up new recipes, fending off the occasional undead menace as they wandered into my new headquarters. It really reminds me of those crazy moments where you could spend an hour shooting fruit in Metal Gear Solid 2.

Yet, the rigid save system (there’s five slots in total now) and the time-management mechanic are still going to be two of the most polarizing elements. The former forces players to only save the game at specific zones (usually bathrooms), so if you happen to die after a long play session and didn’t make it to a save point, tough — your entire progress since your last save is wiped. Some would say (just like the inability to move and shoot in Resident Evil) it adds a layer of strategy and tension to the proceedings, but I’m somewhere in the middle. I don’t mind a challenge, but I would at least appreciate multiple slots so I could experiment a bit. Multiple playthroughs and endings is something I’m accustomed to, but having to replay the entire intro and tiptoe around not missing cases just to see them isn’t exactly thrilling.

The time system goes hand-in-hand with that frustration. While novel at the time, it can become tiresome in later playthroughs. If you’ve never played Dead Rising before the gist is that time is constantly running, with the final requirement of Frank needing to be present at the helipad to “escape” and end the game on a certain date. Because of this underlying limitation, you can actually miss out on side missions or core missions entirely by futzing around, which is part of the allure of a sandbox game that takes place in a mall.

How much you enjoy Dead Rising hinges entirely on your acceptance of this principle. As someone who doesn’t mind playing games over and over until I perfect them, I like the idea of adding some form of urgency, and feel like in most sessions I have ample time to meander without missing out on much. By that same token I also prefer the leniency of the sequels, and enjoy replaying them more often. It’s a give and take, but Dead Rising is worth the squeeze and still holds up after all this time.