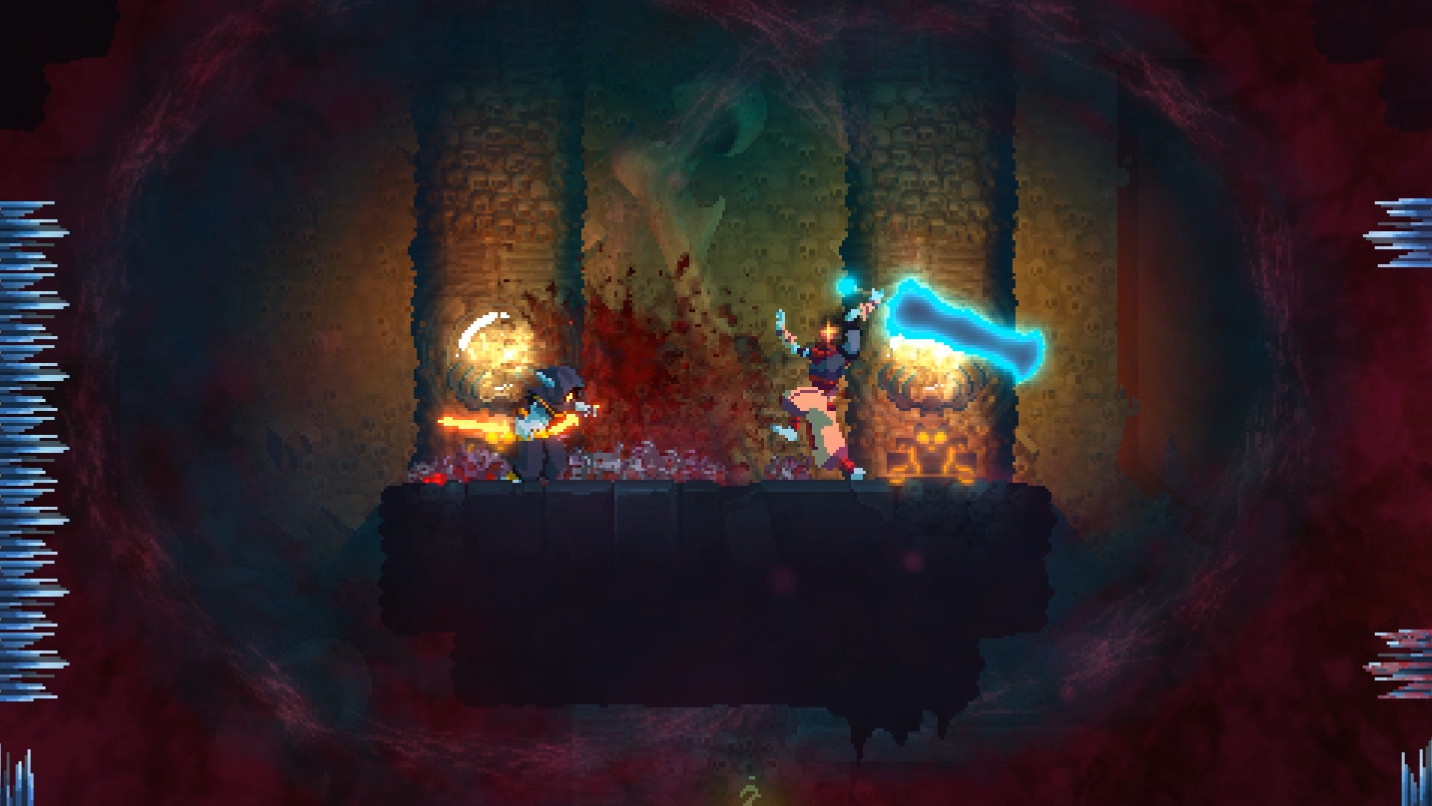 I’ve been playing Dead Cells in early access for over a year now, but I never want to get too far if you know what I mean. I have a weird relationship with early access games in that unless I’m covering them professionally, I prefer to keep my distance until the thing is actually finished.

This time I just couldn’t help myself. 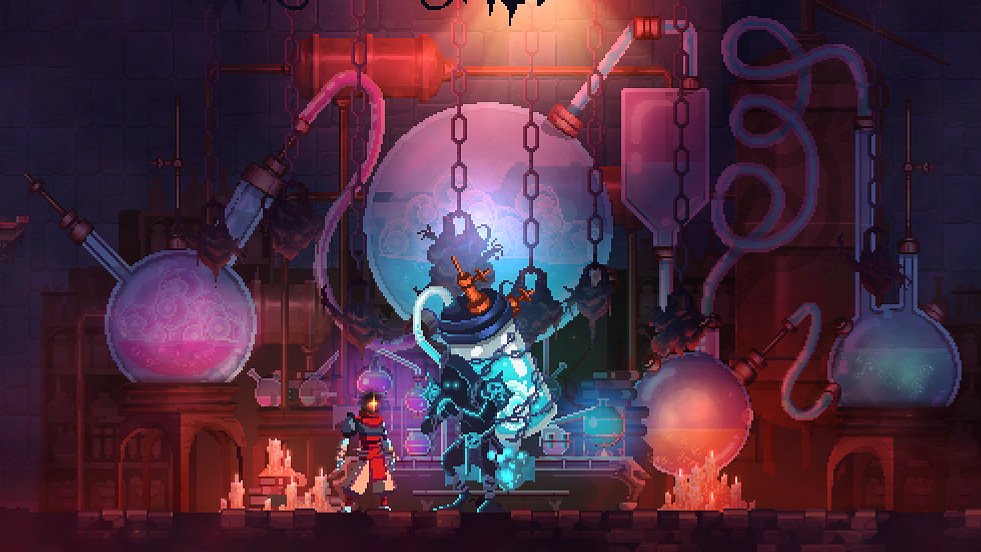 Dead Cells managed to stray from the pack of roguelikes due to its color-coded unique art style. It’s classic in a sense but it’s distinct.

The sprite work is phenomenally done and wrapped up in myriad animations, the weaponry is easy to identify in a pinch and its properties are part of said color-coded scheme, and the concept that the island setting is “constantly evolving” is cute and practical. I dig the juxtaposition of humor and profane imagery too. Horrific Lovecraftian horrors can be pelted by ACME-esque Looney Tunes crates, and the main character, an immortal blob, has a quirky, morbid sense of humor. Oh and it has a purely aesthetic vegetarian food power-up option (among others like “Castlevaniaesque”) which rocks.

Every run starts the same: in a holding cell that houses a challenge mode door and the main entrance, which presents two items initially (a bow or a shield) before you unlock the power to pick up randomized weaponry for each run. The Metroidvania bit comes in with Dead Cells‘ several permanent abilities like growing vines to reach new heights or using specific totems to teleport to new areas, which in turn unlock additional zones connected to earlier maps. It’s a fairly robust set of spokes on wheels: you could run through the entire game without actually seeing some of its areas. While they are generated each run for the most part they retain the same general layout and the interconnected series of levels are always the same. It’s a welcome compromise.

I have an appetite for roguelikes that are true rogueish, hellish experiences that start you off in the exact same square zero situation without fail — and I have an equally peckish penchant for what I call Groundhog Day roguelikes, where you pick up a few tricks and upgrades each time until you’re finally ready to break the cycle. It’s a common trend in recent games to allow for permanent fixtures to carry on from run to run, like installing a small airbag in a fiberglass car that goes 150 miles-per-hour — it gives people a faux sense of comfort.

Dead Cells has a very satisfying reward loop because it constantly encourages combat and exploration. And it’s not in the general, sometimes RNG-filled sense of a lot of other roguelikes that entice you to locate the best overpowered items (this feels more balanced) — if you kill enemies you will find cells and will level up. We’ve seen this formula before. You get a little better, both in terms of raw numbers and skill, until you edge out that boss you’ve been struggling with. It’ll probably last forever because of the raw human element of indomitably. Right now it’s a three-course meal.

Then there’s those moments where you have a perfect run with all of the items you prefer and think “these last 30 meticulous minutes are going to pay off.” Then you get to a boss you’ve never seen before and bam — he smashes you to a pulp. It’s frustrating and it’s meant to be. What separates the great roguelikes from the poor ones is how well they inspire you to pull up your bootstraps and keep going. Dead Cells is really great at not withholding information from the player. You’ll see these little cells on the ground and you can tickle them. Innocuous right? Well later on when you get a power that can interact with them you’ll notice them more. 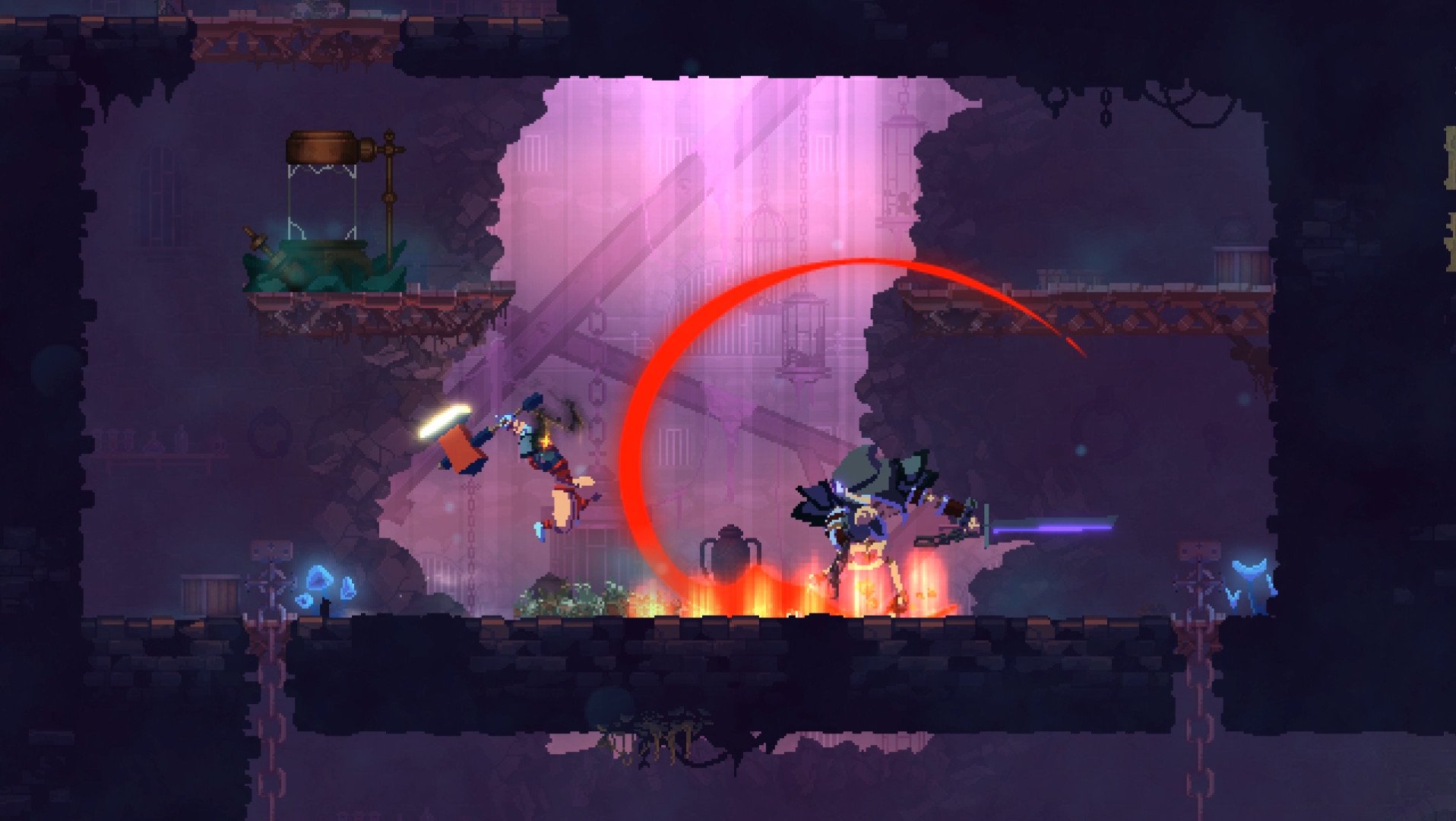 There’s a certain risk-reward to Dead Cells‘ runs too that help spice things up when you’ve failed multiple times and are running through the same zone. Time-based doors quietly ask you to run faster, “pay me” gates offer fleeting power-ups that might seem cool now but will fade after a quick death. Brutality (mostly melee), tactics (mostly ranged), and survival (mostly tools). Having to beat a boss to unlock daily challenges is also a very Dead Cells thing.

Motion Twin thought of everything because Dead Cells records every parameter you can think of. Minute stats, playtime, progress, number of times you’ve killed certain enemies — it even keeps track of your current run’s time (hello speedrunners!). When I finally finished my first full run my heart was pounding.

Then it’s time to repeat the process again, experimenting with a wild newfound power that’s unlocked after completion and items I’ve never used before. I’ll probably be doing that for longer than any roguelike in recent memory.