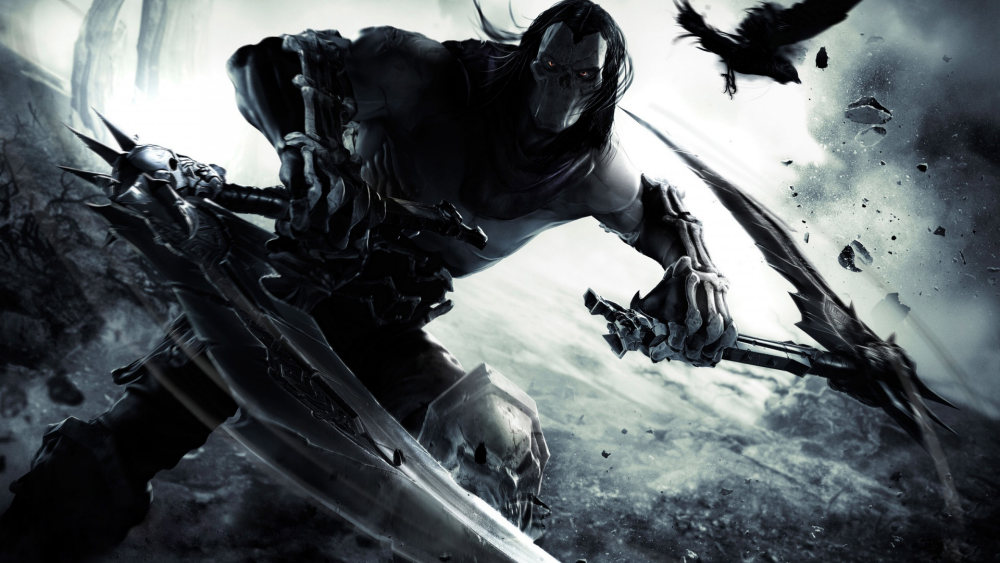 a great example of a sequel done absolutely right

Darksiders was one such game. One of my favorites of 2010, Vigil Games’ appealing (yet ridiculous) action title took the core of The Legend of Zelda and wrapped it in some highly original (and violent) clothes. It should have been a hit. It’s criminal that it wasn’t.

And if Darksiders II goes the same way, criminal won’t even be the word for it. 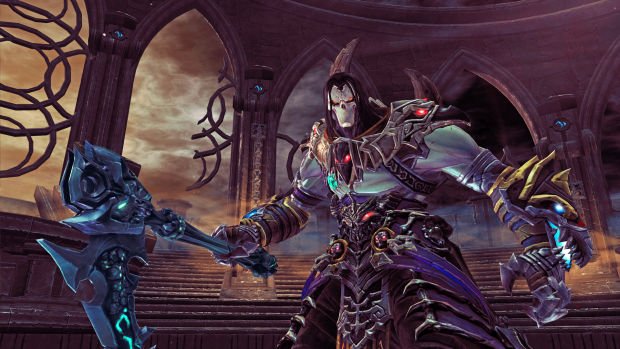 Darksiders II puts players in the bony boots of Death, a Horseman of the Apocalypse on an ironic quest to bring the slain back to life. His journey starts just after War has been tricked into obliterating mankind, and Death believes that if he can resurrect humanity, he’ll clear his brother’s name. Along the way, he encounters Corruption, a malevolent force intent on obliterating all existence, and thus finds himself with more urgent matters than his own brother’s fate — not that he cares.

Though Death is no less grim than his brother, he is an altogether more enjoyable protagonist, possessed as he is of a caustic wit and an affable disregard for anybody who isn’t a member of his family. As always, the weird and wonderful world of Darksiders is brought to life with a host of eccentric and overzealous characters, a fantastical set of locations, and some gorgeous designs courtesy of artist Joe Madureira. Much of Darksiders II will be familiar to fans of War’s bloody journey, but make no mistake, this is quite a different experience.

While Darksiders was an action game with heavy Zelda influences, its sequel comes close to being a full-blown action role-playing game along the lines of Diablo or Torchlight. There are still many Zelda influences — items that open up new paths, dungeons with tiered levels, key chests, and hidden maps — but the package is altogether less shameless this time around, with a greater focus placed on environmental challenges and puzzles that make heavy use of acrobatics, levers, and even a little time travel.

While none of these puzzles are especially fresh to the action genre — we’ve all spent time standing on pressure pads to open gates — the inventive level design helps them be among the best examples you could hope to see. There are some ingenious puzzles that make use of Death’s growing array of gadgets, whether he’s throwing bombs at crystallized rock, creating duplicates of himself, or jumping into Aperture Science-inspired portals. None of the mechanics are new, but the implementations are wholly refined. Dungeons are set out with a keen sense of logic, and the challenges within are taxing without ever coming off as contrived.

Likewise, Death’s movement around the world is full of the same wall-running, ledge clambering, hook-grappling acrobatics we’ve seen in titles like Uncharted or Prince of Persia, but the elegance and speed with which the Horseman navigates his surroundings creates a fluidity quite unlike that seen with other clambering heroes — all while demanding quick wit on the part of the player. At times, this fluidity is a little overbearing, as Death’s animations feel too “floaty” and unpredictable to cope with some of the more demanding, time-limited areas. A number of times, Death needs to move through a series of environmental obstacles at a pace too quick for his often laggy responses, as Vigil placed too much emphasis on animation over utility. However, these irregular occasions are more than made up for by the many moments the system works successfully — and looks gorgeous doing so.

Combat is where most similarities with the original Darksiders can be found, though Death’s respective litheness makes him feel less meaty and far more agile than War ever was. Button-mashing combos, a heavy emphasis on dodging, and a range of increasingly brutal special skills make for a combat system that balances grace and brutality in equal measure. Death’s weapon of choice is a pair of scythes, which will always serve as his primary armaments, though he can equip a secondary weapon from a range that includes maces, hammers, glaives, claws, and more. Scythes and secondary weapons can be used in conjunction to create more effective combos, and Death possesses a power gauge that, when full, allows him to assume the spectral form of the Grim Reaper himself, cutting into foes with deadly strength and enhanced resistance. 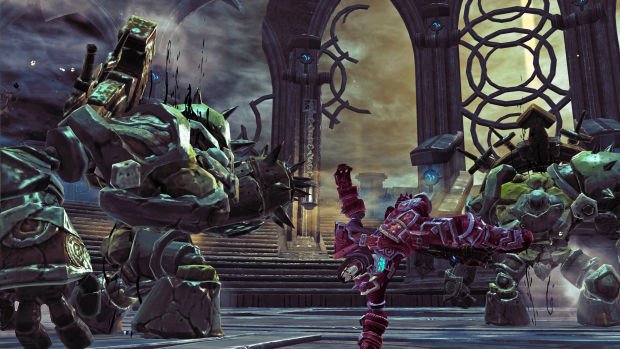 As Death gains experience and rises in level, he can unlock and upgrade abilities from two skill trees. Such abilities include the power to close distances with a teleporting slash, summon demonic minions, or send a murder of crows to steal health. Each power starts off relatively weak, but adding and strengthening each one with subsequent skill points can lead to possession of some utterly vicious playthings. If one ever grows bored of them, the demonic merchant Vulgrim is on hand to reset your points and allow you to start over.

Darksiders II‘s combat system works best in smaller engagements against a moderate selection of foes. Since it’s based on counterattacks, being able to concentrate on opponents is paramount, but it has to be said that Vigil sometimes relies too much on undermining this to create a sense of challenge. A fair number of fights, particularly toward the latter portions of the game, swamp the screen with monsters, many of which can power through your attacks in order to break combos. Some of the best battles are one-on-one engagements where timing is of the essence, so these larger, chaotic fights really aren’t needed and can be a little infuriating at times.

Things are kept interesting with the all-new loot system. Enemies now dispense vast quantities of gold, as well as pauldrons, greaves, vambraces, and weapons. Darksiders II does a solid job of providing more powerful gear at the right intervals, offering enough incentive to keep one hunting for fresh loot. There are also a whole bunch of extra statistics alongside the regular damage/defense boosts, allowing Death to improve his special attacks, increase the chance to perform execution kills, and enjoy a health regen. Possessed weapons are manually upgraded by “feeding” other loot items to them, and each level gained provides a variety of upgrade choices, allowing for tailor-made and significantly powerful armaments. Naturally, merchants are peppered throughout the world, happy to sell new items and buy your unwanted trash. 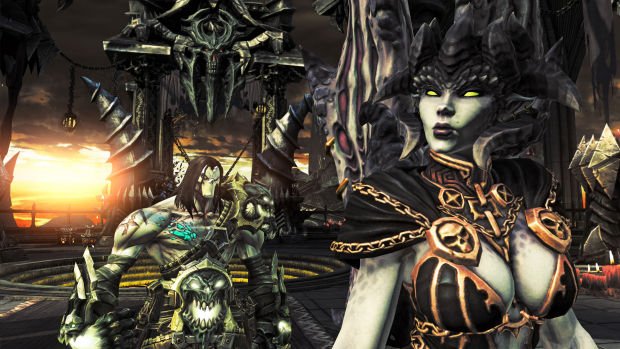 While not strictly open-world, the four realms that Death gradually uncovers can be freely traveled and are vast enough to provide secrets, hidden items, and side quests. Death traverses the game’s realms by summoning his ethereal horse, Despair, though there are enough fast travel points to get around the map without much equestrian help. A number of the optional missions rely too heavily on tiresome collection quests, but there are some satisfyingly challenging tasks involving full-fledged dungeons and powerful boss creatures. All told, the main game should take around 20 hours to beat, with plenty of content left unfinished. There’s also a “new game plus” mode, a survival-based challenge called the Crucible, and an unlockable “Nightmare” mode that features permanent death. For the hardcore Darksiders fan, there is a ton of stuff to uncover, ranging from the banal to the engrossing.

The sheer wealth of content on offer makes the original Darksiders look like an appetizer — still incredibly enjoyable in its own way, but a morsel in comparison to the main entree. Some of the optional quests feel like time wasters, but the main meat of the game features very little fluff — even if the “perform three tasks to unlock the real objective” formula is played a few times too many. While predictably structured, the adventure is never boring, and as Death slices his way through progressively more aggressive and bizarre creatures, there’s a tremendous sense of build. Sadly, the actual ending is a bit brief and unsatisfying, but it’s a fantastic ride to that point. 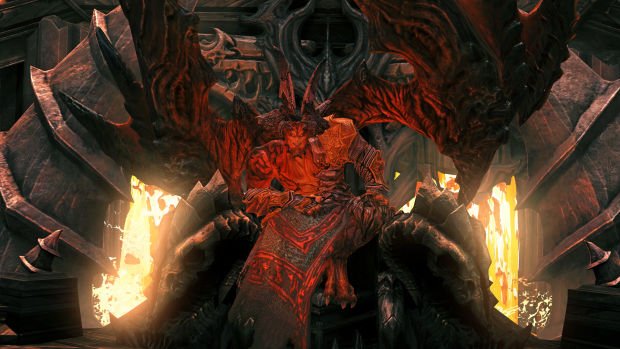 For a vast majority of the time, Darksiders II is a fantastic experience — highly polished, tightly scripted, and boasting enough moments of exhilaration to make up for the frustrating points. While mostly a high quality experience, an entire section that takes place on apocalyptic Earth seems quite glitchy, with sounds not playing and dialog skipping. It’s a comparatively small section of the game and will likely be patched, but it’s worth noting that right now the Earth section is a little busted. Still, the rest of the experience is remarkably well put together, with none of the screen-tearing found in the previous game and no other bugs encountered during my playthrough.

I wouldn’t want to say that Darksiders II is better than Darksiders. Both games are different beasts and provide separate experiences. It’s rare to see a sequel retain so much flavor while totally restructuring itself, but Vigil Games knocked it out of the park with aplomb. Neither game is superior, both are enjoyable in different ways, and together they weave one fantastic tale. Those new to the series certainly don’t need to know too much to get into it, but existing fans will be able to enjoy the universe in a whole new perspective. As far as I’m concerned, Darksiders II is a great example of a sequel done absolutely right. 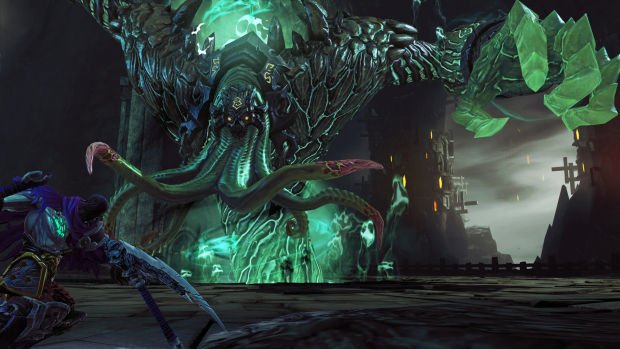 There are certainly complaints to be had with the title. The latter half feels like it’s over a bit too quickly, I’d have loved to have seen more exploration of Death as a protagonist, and I feel that the series’ trademark macabre characters needed more of a spotlight. However, with a game that already provides so much, these things feel more like desired garnish rather than missing components. This is one of those games that you can really sink your teeth into, a game that feels full, making you want more without feeling like you need more.

Darksiders II takes the best elements from many games and blends them into a seamless, wholly satisfying package. With a unique protagonist, killer art style, savvy level design, and ferocious combat, there’s little left for an action fan to want, while the role-playing elements have been enhanced to such a degree that the overall experience feels deeper and more compelling than before. If this game is not a success, then truly the world doesn’t know what’s good for it.