If Crysis was known for one thing, it was amazing graphics. That was with good reason, as the game didn’t offer much else. While it boasted a few interesting ideas, the game felt imbalanced, had bizarre difficulty spikes, and felt more like a tech demo than an actual game.

With Crysis 2, Crytek has scaled back its focus on pure visual overkill with a game that still looks thoroughly gorgeous while providing something a little meatier than surface-level eye candy. It may surprise you, but there are a lot more than pretty textures to talk about. 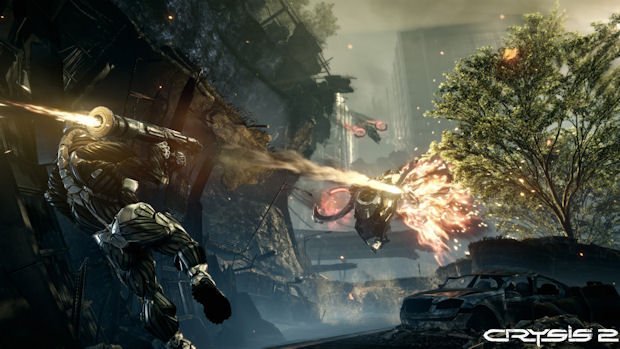 Crysis 2 swaps the lush jungle for the war-torn streets of New York, where a killer virus is destroying civilization and a gooey race of alien invaders known as the Ceph are wrecking everything in sight. As US Marine Alcatraz, your job is to step into a superpowered Nanosuit and wipe out not only the Ceph, but the CELL private army that wants to take you down. It is a story. You likely won’t remember it. Now let’s blow some stuff up.

Almost as soon as the player gets a gun, the improvements over the original Crysis are clear. The game’s four main superpowers — enhanced strength, extra armor, stealth and super speed — have been altered considerably, leading to a more intuitive and balanced experience. Strength and Speed are now passive abilities — they’ll automatically kick in if you charge melee attacks or start to sprint. Armor used to be the passive default option for the Suit, but is now an activated ability, along with stealth.

Unlike last time, taking advantage of the Nanosuit’s powers feels rewarding rather than punishing. Activing Stealth and Armor won’t drain your suit’s energy within milliseconds, allowing you enough time to navigate to an advantageous position or absorb heavy fire. Balancing your offensive power against your defensive ability is a careful game, and one that provides a consistent challenge without becoming overbearing. 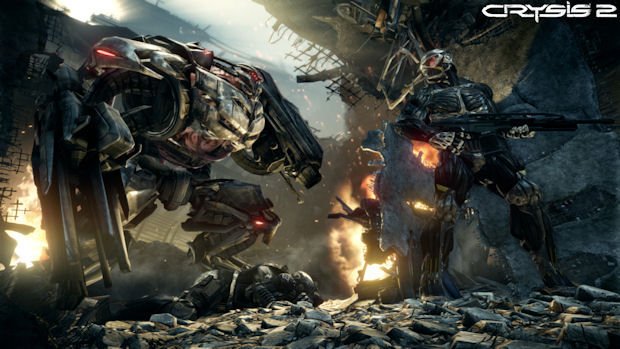 The levels feel smaller than Crysis‘, but they are better designed and the action is far tighter, with consistent pacing and a natural flow from battle to battle. Before each fight, you can scope into the territory to mark enemies, ammo crates, and tactical options. The tactical options offer cool ways to approach a battle, pointing out prime sneaking areas, useful flanking positions, and turrets that can be controlled. While none of the tactical options will dramatically alter the way a fight progresses, they are nonetheless useful little pieces of Intel that may come in handy.

Crysis 2 offers players a chance to actually feel like a badass, which is something Crysis sorely lacked. With the improvements made to stealth, you can engage in serious cat-and-mouse games with your opponents, stalking your prey and stealthily murdering them, or sneaking into position, switching to max armor and spraying a confused crowd with bullets.

Enemies will react to your shenanigans, crying out to allies if they see you switch abilities and homing in on your last known position. Their paranoid chatter of enemies and your ability to toy with them evokes memories of Batman: Arkham Asylum and I’d say the predatory stealth in Crysis 2 can be just as satisfying here as it was in Rocksteady’s classic action title. The only thing that lets the stealth down is the randomly spotty AI, which will see enemies get stuck on scenery or sometimes kill themselves. I saw a group of about four soldiers aim a grenade at a wall and stand right in place for the explosion to take them all out. I suppose you can pretend it’s the enemies freaking out and making mistakes if you don’t want to break the illusion. 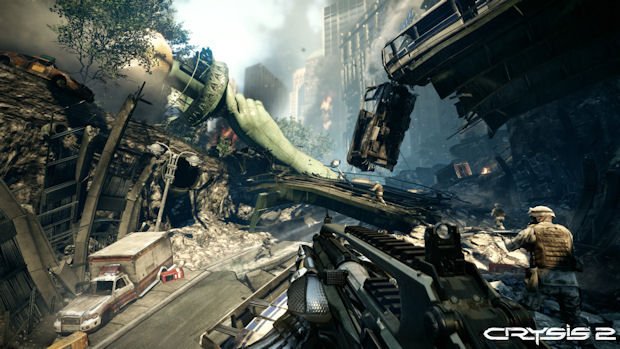 Although stealth is incredibly useful, it’s not the only way to approach a battle. Sometimes (or rather, often), the game will require you to get less thoughtful and more violent. Fortunately, the shooting element of the game hits its mark more than adequately. Combat is intense and sometimes overwhelming with the sheer volume of bullets spraying, aliens screeching and explosions exploding. Learning when to throw on your armor, when to conserve energy for sprinting, and when to hide is part of an incredibly stylish dynamic that makes Crysis 2 feel a little more involved and fluid than other shooters, even if the basic action is quite derivative.

Indeed, should you get over the energy of the action, you’ll realize that the the fundamentals of Crysis 2 aren’t quite as innovative as its gimmickry. While there are a range of weapons covering both realistic and futuristic firearms, most weapons are simply variants of the same assault rifle with attachments, and when you’re in a straight shootout with only one or two enemies, there’s a risk of feeling like you’re in any generic first-person-shooter. Most of the unique weapons aren’t all that useful in an actual fight, so you’ll likely want to stick to the dull assault and sniper rifle combo, which is a shame.

Every so often, the game’s overall structure can feel a little repetitive. Once you’ve performed one stealth kill, you’ve performed them all — almost literally, as there are only two animations for stealth kills, and both of them are rather mundane. Despite the wealth of tactical options, nearly all opportunities lead you down the same sneak/shoot/run/shoot/sneak/shoot path. While most of the game still manages to stay fun in spite of this, there are a handful of distinct moments when the game feels like it’s treading water. 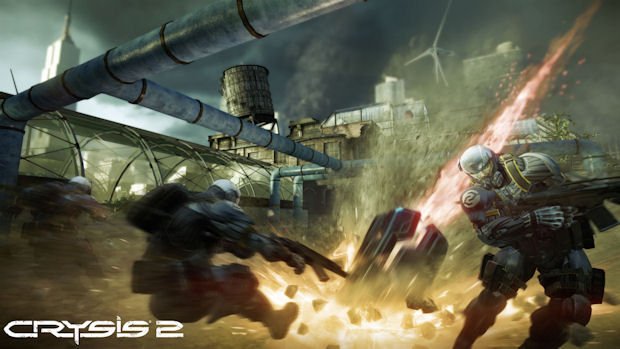 This is made worse by the fact that there are a few levels that have fantastic pacing and seem to be building to a crescendo that … never happens. The game is great at building momentum, but fails to deliver in certain areas, such as one level where you fight your way through a warzone and hop into the back of an armored car, taking hold of the gun turret. Just as you’re expecting to get into a huge, adrenaline-pumping shooting gallery, the game simply fades to black and you’re in the next level, on foot.

These issues sometimes threaten to drag down the game, but the speed and relentlessness of the combat remains a significant driving force. Crytek did an incredible job of making Crysis 2 feel like more of a shooter than it actually is, to the point where only the truly pedantic would have cause to be unsatisfied. It does a lot of things you’ve seen before, but it does them so much cooler than the average game that it feels like you’re playing something far more original.

Much has been made of the game’s multiplayer and I have to say that, while I was initially unconvinced, the online content is far more engrossing than one might think. At its core — it has to be said — the game has been utterly, shamelessly lifted from Call of Duty. It has everything you’ve come to expect from a post-COD shooter — persistent levels, kill streak rewards, perks — and it even has the same fast paced kill/die/kill/die meat-grinder gameplay that Modern Warfare popularized. The thing is — though Crysis 2 is ostensibly Modern Warfare with sci-fi gadgets, it’s a pretty damn good Modern Warfare with sci-fi gadgets. 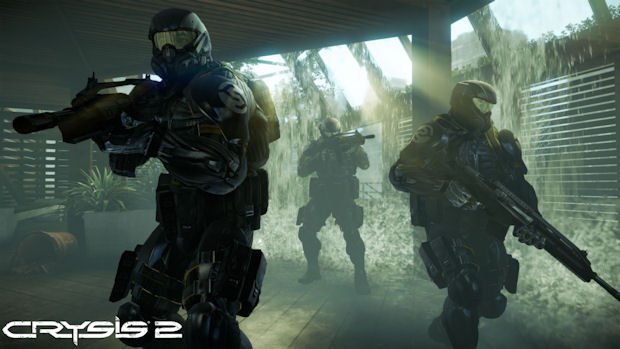 Crytek successfully lifted the solid, enjoyable, often addictive combat of Call of Duty while positively enhancing the experience with the Nanosuit’s abilities. All players are able to dash at super speeds, cloak themselves, and increase their armor, giving everyone a chance to be an overpowered supersoldier. While this could easily have become a chaotic affair, the super abilities are balanced so well that it works. Stealthy players can be spotted by anybody paying close enough attention, while armored players will go down if killed with skill. You can’t just turn invisible and run around stabbing everyone.

As the game progresses, players can specialize and get access to more unique abilities — such as decoy devices that project holograms of players and draw enemy fire. The Nanosuit can be fine-tuned for players who prefer to remain strictly sneaky or would rather charge into battle with guns blazing. There’s plenty on offer, and players who get into this mode will find a lot to love.

There does seem to be a few niggling issues, however. For instance, I’ve noticed that I tend to get shot through walls a lot. Not thin, realistically penetrable walls, either. I’ve been sniped through six-foot thick stone pillars, and the game’s kill-cam even showed the bullet passing through the thing like paper. I have also been shot through an allied player before, who remains unhurt. These strange, incorporeal bullets aren’t a complete game killer, but they’re bemusing nonetheless.

Despite a few strange bullet glitches, Crysis 2‘s multiplayer mode echoes the accomplishments of the single-player campaign, in that it’s a derivative experience that is just too flashy and fun to be written off. You’ve done it all before, but not quite this snazzily. 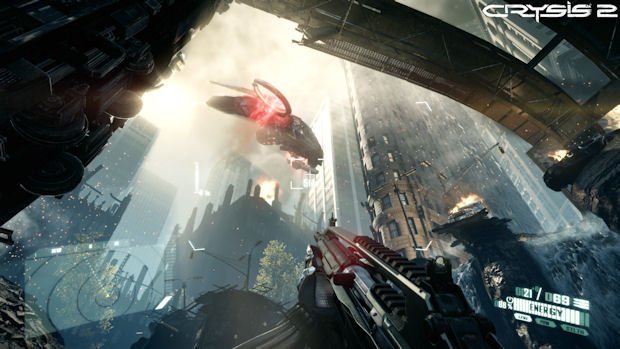 Naturally, the gameplay is all wrapped up with some of the most gorgeous visuals you’ll see in a videogame. Even on the Xbox 360, Crysis 2 is an optical treat, especially when it comes to the setpieces, which are tastefully kept to a minimum but always kick you right in the eyes when needed. In the years since Crysis‘ release, this sequel’s graphics are no longer the mindblowing revelation they once were, but you still won’t find many better looking titles on a console or PC. More surprising is the game’s soundtrack, which is damn fine and takes the boring “sweeping orchestral score” that infests most shooters and takes it in a few new directions. The game’s main theme is particularly atmospheric.

Crysis 2 is less ambitious than Crytek’s previous games, but it is also the most polished, refined and enjoyable title that the studio’s ever produced. With tighter gameplay, better level design, and an exquisite sense of flowing action, Crysis 2 is a damn great title that any shooter fan would do well to play at least once.