Tunes from the crypt

Dance Dance Revolution was a large part of an earlier era of my life. Going though dance pads year after year until I finally convinced my parents to get me one of the “big boy” pads for a lot more money. Eventually I grew past that era, but that part of my life will always be fondly remembered.

These days, games like DDR seem to be old hat, and roguelikes are the new hot genre in town. In comes Crypt of the NecroDancer to merge the two; flawlessly I might add, and rekindle that old love with my new love.

Man, is it lovely. 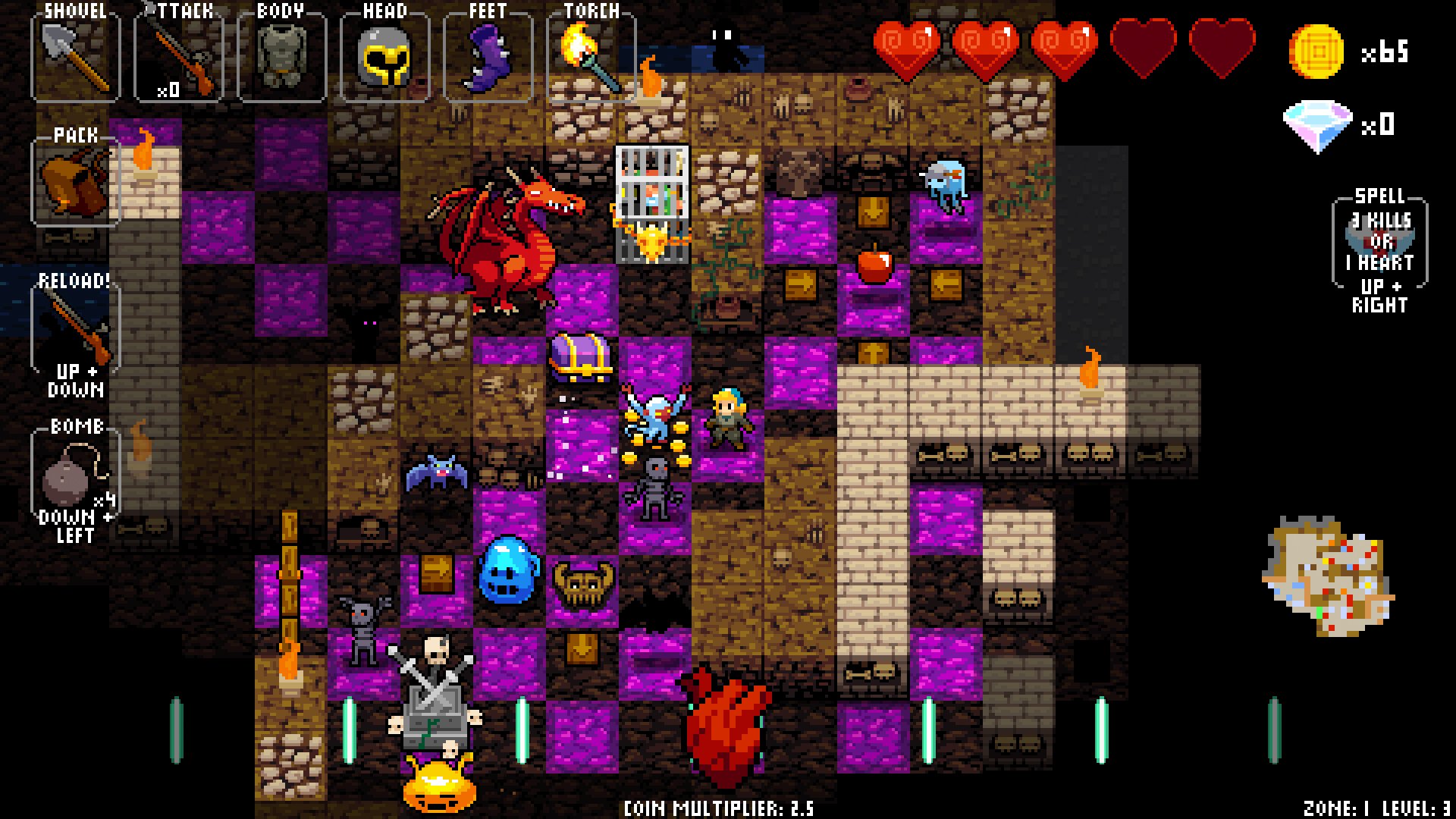 It would be a criminal act to not immediately mention the music in Crypt of the NecroDancer as it plays a starring role and deserves the first-paragraph treatment. This is mostly due to the fact that music is interwoven into the gameplay itself. The player can only act in time with the beat, which is also when the enemies act. Said beat has a visual representation on the bottom of the screen to help players get accustomed to it, but after a short while most players will be acting based on the audio cue, not the visual. When done correctly, the music, movements, and sound effects line up to create something that can only be described as “groovy.”

In a game where music is at the core of the experience, the soundtrack could have easily made the game fall flat. Thankfully, this is not the case. There are three soundtracks built into the game. The default music is by Danny Baranowsky, and it is amazingly brilliant and brilliantly amazing. The tunes for each level are varied, yet all of them are catchy. The other soundtracks are a metal remix by FamilyJules7X and an EDM version by A_Rival, and also assuage the eardrums. Regardless of music preference, players are bound to dig one, if not all, of these versions. It’s also possible for players to import their own music for people who don’t like good music, or just want to work with something different.

The game isn’t just about boppin’ along to some great music, though; there is a story at play here. There are cutscenes for characters between zones, and paying attention to them, as well as some in-game hints, alludes to a pretty big overarching story. It’s split over multiple playthroughs with different characters, so it will take some time to reveal the whole thing. The lore is legitimately interesting, something many players may not be expecting.

Every action is mapped to the arrow keys. In fact, the game can even be played with a dance pad! There’s a specific mode for dance pad play, which makes the game a bit easier since the control method is inherently more difficult. This also serves as an easier mode to introduce players to the game who don’t feel they are up to the full challenge quite yet. When playing with a controller, everything is mapped to the face buttons, which can also be remapped to the player’s liking.

Attacking is as simple as pressing the direction of the enemy. Items and spells are also available, and are used by pressing a combination of two arrow keys. For example, to use a bomb, players must press down and left (by default) on the beat. Various weapon types will alter where enemies can be killed in relation to the player, and it is of the utmost important to know a weapon’s attack range.

When moving, the game will check if anything can be attacked first. So if a player is expecting to move forward but an enemy is within attack range, the attack will happen. This means the character will remain stationary, which can be bad news in certain situations. Knowing these attack mechanics is crucial, and thankfully there is a weapon range in the game where players can try out all the different types of weapons and learn them inside and out. I recommend doing this at least once, especially for the whip.

In addition to weapons, players have access to a shovel for digging through walls, a consumable item, a torch, armor, a ring, and a spell. Armor is split up into head, chest, and feet, making there a lot of items to equip for a full “set.” The items found are random so make sure to pray to RNGesus before each run!

Many items must be unlocked before they show up in chests within the dungeon. Unlocking items is permanent and costs diamonds, which can be found in the dungeon itself. Any diamonds not spent in between runs are lost forever, giving the player all the incentive in the world to spend them on something. It’s the perfect system of progression in a game that otherwise has very little, ensuring that even the “terrible” runs can usually yield some sort of good news and contribute to the greater good.

The dungeon is split into four distinct zones, each with its own atmosphere, enemies, and randomly generated layout. The first two are on the simpler side of things, but the third and fourth zones introduce new tile mechanics and are completely unique. It’s amazing how fast confidence plummets after beating one zone and entering another. It’s easy to be on a bit of a high after beating a boss for the first time, only to be introduced to a brand new area where players know basically nothing. It’s a kick in the pants, and it feels so good. 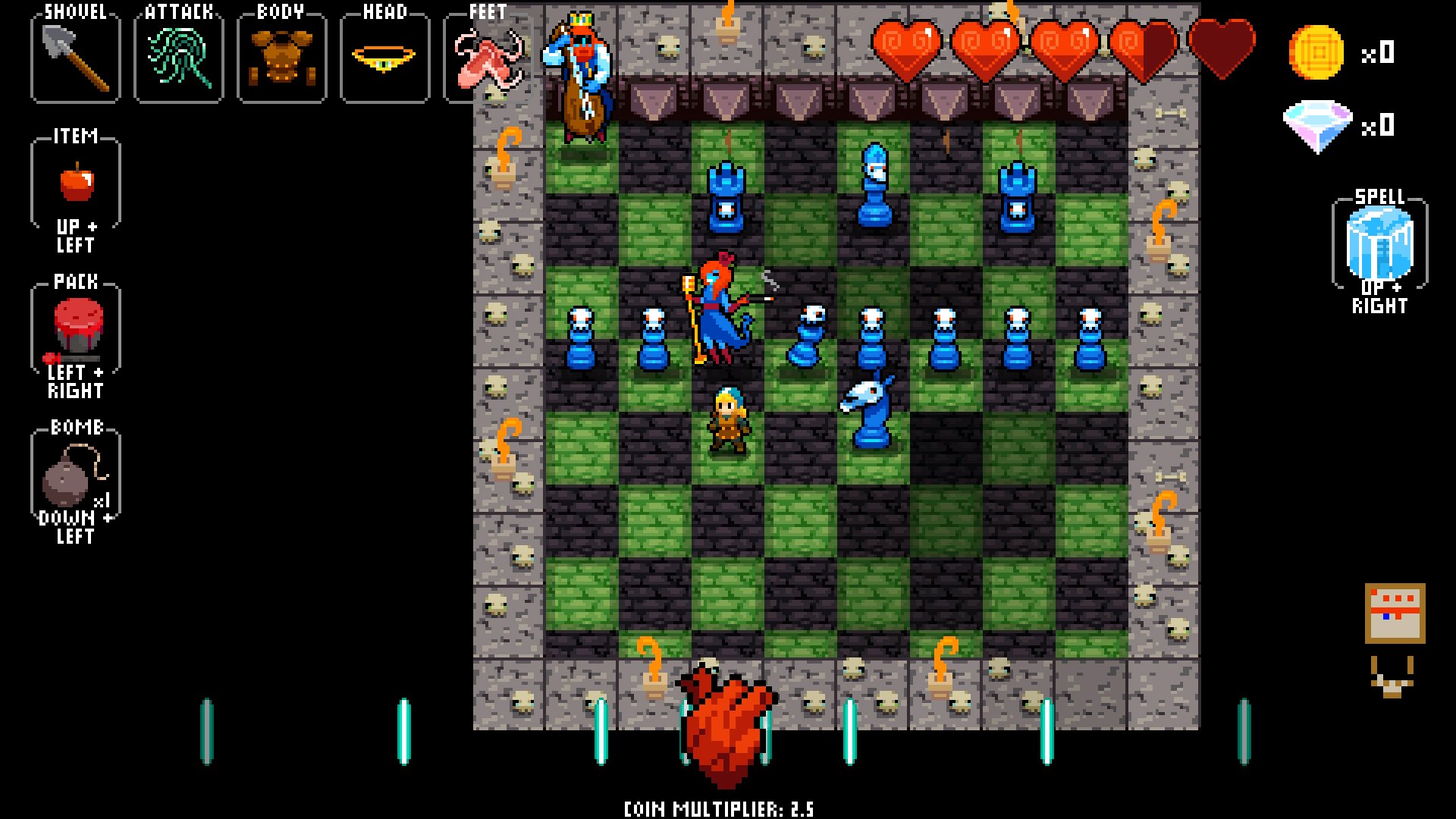 Speaking of the boss fights, each one in NecroDancer is incredibly memorable. Each one has its own theme and executes it perfectly. My favorite is definitely Deep Blues, which puts the player against an entire set of chess pieces as enemies, who move according to the chess ruleset. Seeing a boss for the first time usually results in a bit of laughter followed by an “oh shit” as the gravity of the situation sets in. Then death, of course.

Some bosses are definitely easier to comprehend than others (I don’t want to use the term “easier in general”), and the boss fights at the end of zones one through three are randomly chosen, which exacerbates the feeling of luck that’s inherent in the roguelike genre. There’s likely going to be some aggravation from time to time, simply because of bad luck. This frustration is lessened because of the diamond system, but the feeling of futility is occasionally hard to fight back, especially when there’s nothing left to spend diamonds on.

While each zone shares some common enemies, the enemy variety in each zone is largely unique. Some weapons may feel overpowered in one zone, and completely useless in another simply because of the change in enemy behavior. This makes the “all zones” runs that much harder. Some enemy types will be “buffed” in later zones, adding more health or variants on the original behavior. 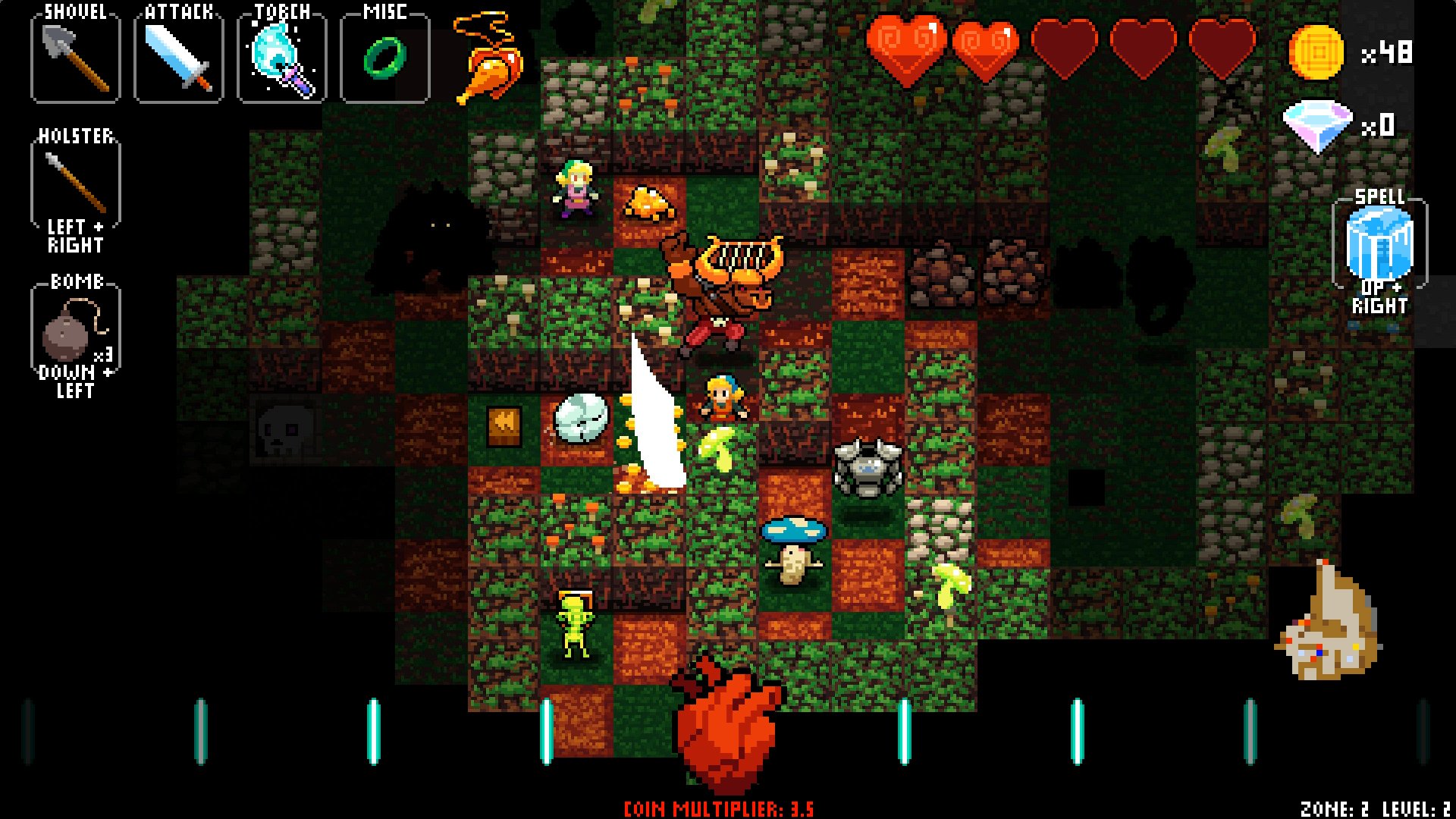 After completing the four core areas, there is still plenty to keep players occupied. Crypt of the NecroDancer also supports mods, and they are dead simple to use. All you have to do is download a mod from the Steam Workshop, then activate it from the pause menu. Many of the mods are currently music changes or skin changes, but only time will tell how far they go in the future.

Different characters are also unlocked by accomplishing certain goals, and these characters are way more than just re-skins of the main character, Candace. The Monk, for example, can choose any one item from the Shopkeeper for free, but will die instantly if he lands on gold. Considering gold is dropped by literally every enemy, this forces a huge change in playstyle. I couldn’t even get past the first zone!

In addition to the standard dungeon, which can also be tackled with two players in local multiplayer, there is a boss fight arena, an enemy behavior trainer, a codex for advanced skills, a daily challenge, and a level editor. Beating the game once is really only the beginning. There are enough variations on the basic playthrough to keep players coming back for a long time.

Crypt of the NecroDancer accomplishes what few games even attempt to do. It merges together two completely different genres: rhythm and roguelike. The frustrations of both come as part of the package, but some intelligent design decisions help to alleviate the issue. For those looking for the next gaming obsession after the likes of Spelunky, Binding of Isaac, or Rogue Legacy, look no further than Crypt of the NecroDancer.