There are Contra games I still play annually to this day — and I’m not just referring to the original.

I really have to give a ton of credit to Shattered Soldier and Neo Contra, the two (these days, low key) PS2 entries, for laying it down with two of the most fun co-op campaigns to date, and Arc System Works’ Hard Corps: Uprising still looks beautiful (I can’t believe it’s been eight years).

“Beautiful” isn’t exactly how I’d describe Contra: Rogue Corps, but at a budget price it might suffice as a rainy day weekend type of game. 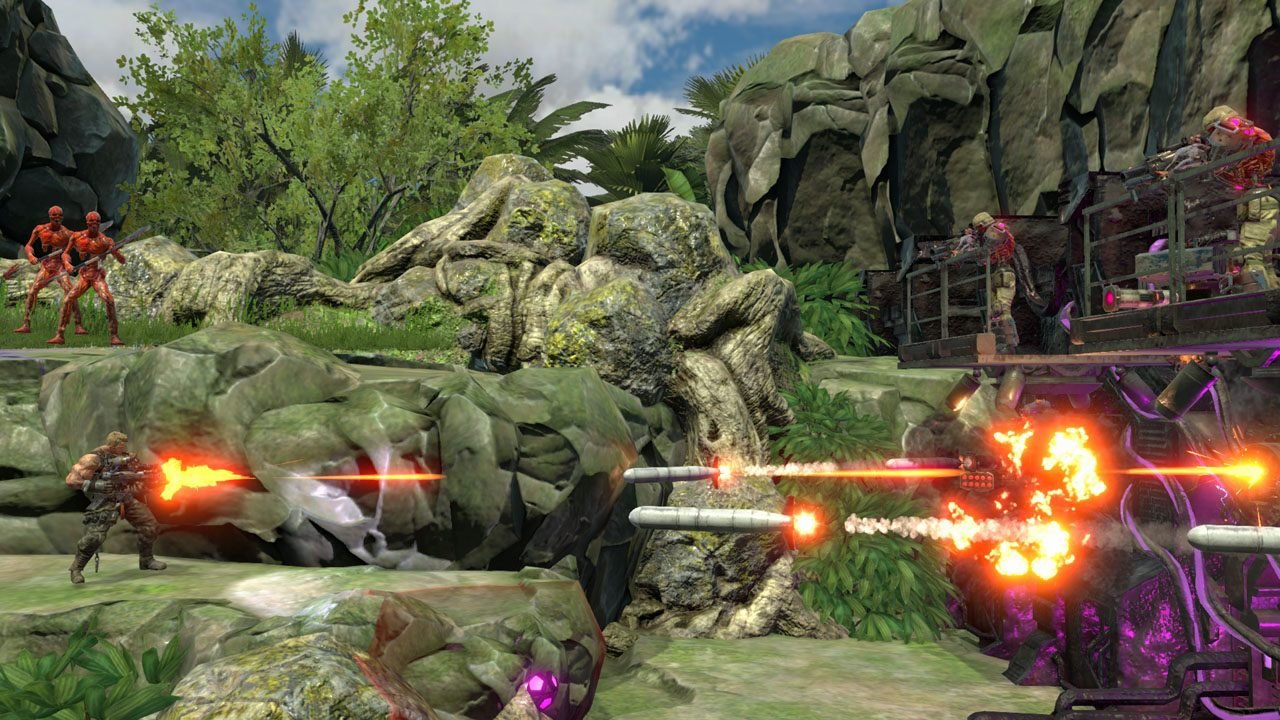 Contra: Rogue Corps isn’t solely a Konami internal project per se. It’s actually co-developed by Toylogic, who mostly have done assistance/auxiliary work on a few big-name projects like Kid Icarus: Uprising and Psycho Break (Evil Within). However, Nobuya Nakazato directed it, who helmed the legendary Rocket Knight on Genesis, and had a hand in a ton of other games (including OG Contra joints). This mishmash of talent involved bleeds into the game itself, which is a roller coaster of a shoot ’em up.

Rogue Corps attempts to continue the very loose “Alien Wars” timeline of the series proper, but really, all you need to know is that you’re playing as a crazy dude (Kaiser), a panda (Hungry Beast), a badass woman (Ms. Harakiri), and a gross bug thing (Gentleman). Well, you should also take into account that Rogue Corps dials up the absurdity (beyond the 3D glasses and killer robot chicken from the oddball PlayStation entry Legacy of War) up to Borderlands levels.

For example: Ms. Harakiri isn’t just a bloodthirsty assassin, she has an alien embedded in her stomach that she keeps under control with a sword (“I would advise not getting killed by her”). Characters shout profanities on command, and there’s these little transition animations that rule in a ’90s cartoon sort of way that are super morbid. In one of the first cutscenes, the gang saves an innocent hostage from the alien menace, only for said hostage to melt horrendously by way of an acid bath moments later. To some extent this playful tone extends to the game itself: enemies can flip up and smash against the screen like a Super Nintendo brawler.

It’s cool and frequently silly, all to its benefit. But once you actually load up into the game itself (especially on Switch, where it looks particularly rough), that veneer starts to fall apart. Confusingly, Rogue Corps is actually broken up into multiple modes. The campaign, which features constant camera changes, is actually the main event and can be played via online or locally with multiple Switches. Then there’s a strange PVP component, and the couch co-op portion (this is important) is actually a separate gametype that you need to unlock. We’ll get to that.

This is a messy game, there’s just no other way to say it. There’s no traditional pause in offline single-player, and I spotted menu typos (“allows here” instead of “allows her” in the loading screen tips menu), you name it. In some cases, “rough” is an understatement in reference to the aesthetics (again, on Switch, the version I played), and I just want to ask one question: is it possible to patch in a soundtrack? The practically non-existent one feels like a wasted opportunity when over-the-top crazy metal would have been a killer choice.

Slowly but surely though Rogue Corps won me over…in flashes. When it comes down to it most of the levels are actually fun to play, offer interesting enemy placements, and funnel players into tense situations. I dig the multi-faceted approach to combat, which incorporates a (very powerful) arcadey dash, melee finishers, and slight platforming with a jump button. Locomotion is paramount, as Rogue Corps‘ constantly shifting perspective adds a lot of variety to the standard run and gun archetype.

The cooling system (which overheats your guns if you use them too often) is going to be divisive, and I can certainly see where they were going with it. Swapping weapons is key, and the fact that you can’t just hold one button down indefinitely adds some strategy to the mix — especially when coupled with some of the cascading, almost puzzle-like barrel explosions. It’ll take some getting used to, but if you don’t like how a certain gun works you can swap it out, and four characters with distinct special skills and loadouts is the sweet spot for a run and gun game like this. I also dig that you can customize your build and gear (it’s part of the game’s long-term appeal) even if it does get a tad unwieldy at times.

As well as the typical “make your way through the level” adventure fare, levels are broken up by arena brawls, which are hectic as hell and easily the best part of the game. The whole cooling concept shines here as you need to regulate your weapons lest you get caught with your pants down, eaten alive by a swarm of zombie…things. When you have your back to the wall shooting out a screen full of enemies, you know they did something right. There’s a structure it all too, and optional extra missions if you want more variety.

Boss designs, on the other hand, can be just as messy as the framework. Some are really fun, MMO-like skirmishes that fill the screen with bullets and offer up generous attack telegraphs to keep you on your toes without feeling overwhelming. Collectibles can even pop up in the middle of a fight, which lends itself well to the whole entropic goal. Big bosses, on the other hand, can be extremely tedious, with tired “weak point” strategies and infrequent attack windows.

I was not able to test out online play during this review period, but I did try out four-player co-op. It’s a different campaign, intended as a side story, and the developer directly compares it to Gauntlet and Smash TV. It’s…disappointing. Having to wait to unlock it (roughly an hour or more) with a group can be a drag, and it basically amounts to randomized dungeon runs where the enemy layouts don’t always gel together swimmingly. Most of the people in my group weren’t thrilled with it, and the entire time it was running I wished that the campaign had full couch support.

Konami vows that more free DLC is on the way, and even teases something that has to do with Bill and Lance, the heroes of the original game. While none of those promises are factored in here, there is the chance that Rogue Corps could be improved upon over time and eventually become more than what it was at launch: similar to how Super Bomberman R turned out with subsequent performance and content patches.

It’s a shame because sometimes, even when I’m fighting the game, I’m enjoying myself. Contra: Rogue Corps needed more time in the oven, and I’m not sure the whole “segmented ways to play” concept is going to go over well with everyone. But when it’s firing on all cylinders, there’s some silly shoot ’em up fun going on.