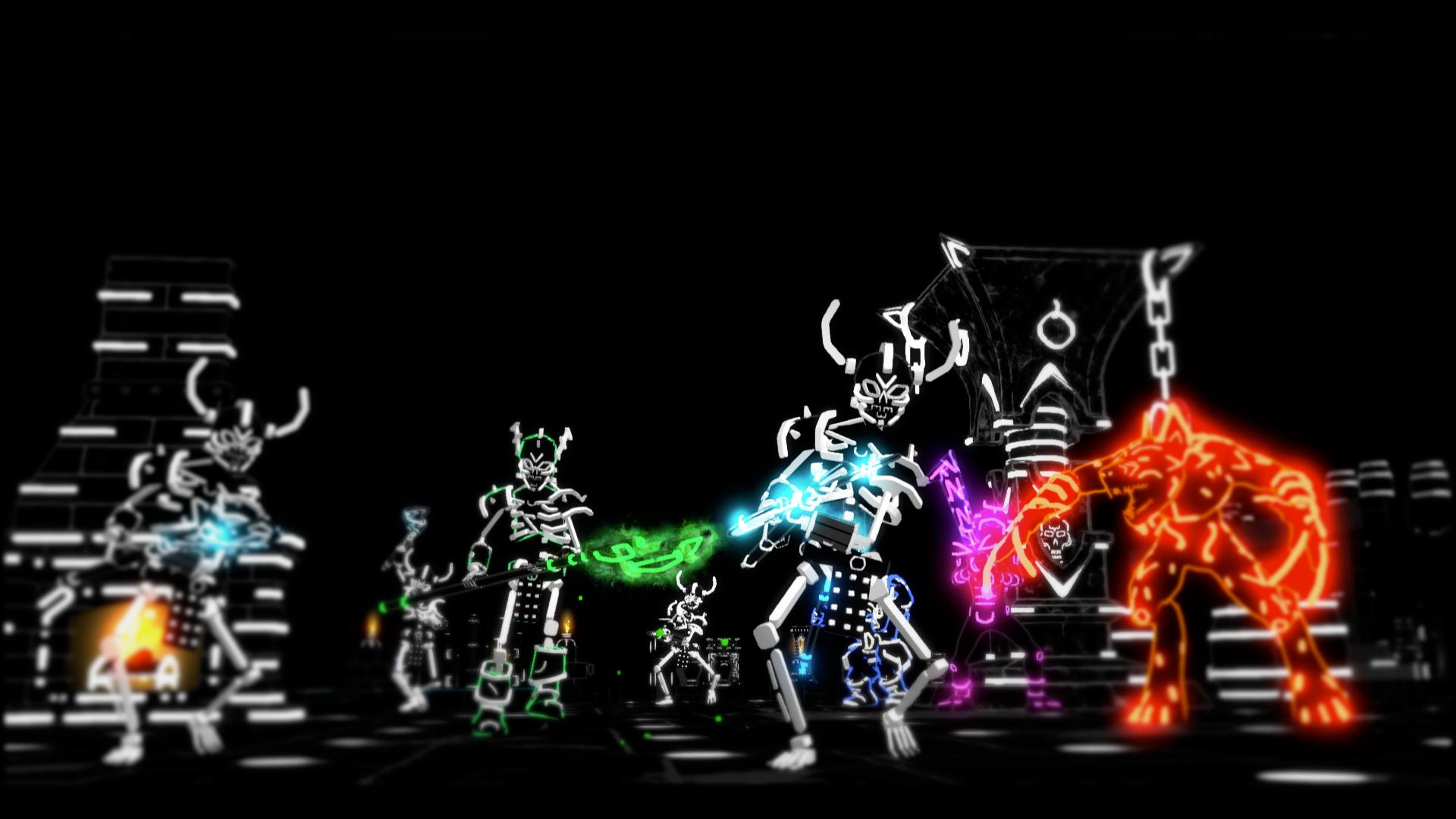 [Everyone welcome Peter Glagowski (KingSigy) to the party, who will be helping us out with coverage! – Chris]

Gaming has come a long way from the glory days of MS-DOS. We now have visual effects that mirror reality or create fully realized cartoon landscapes. Literally anything is possible with current technology. The 1980s weren’t the same; back then, having ASCII letters represent characters was the only option available. While I’m far too young to have actually played Rogue, it was the basis for many adventure games that followed.

[email protected] takes a lot of inspiration from Rogue while also utilizing modern technology to create a more dynamic experience. While the game has a lot of cool ideas, some issues with camera angles rear their ugly head and sour an otherwise neat experience. 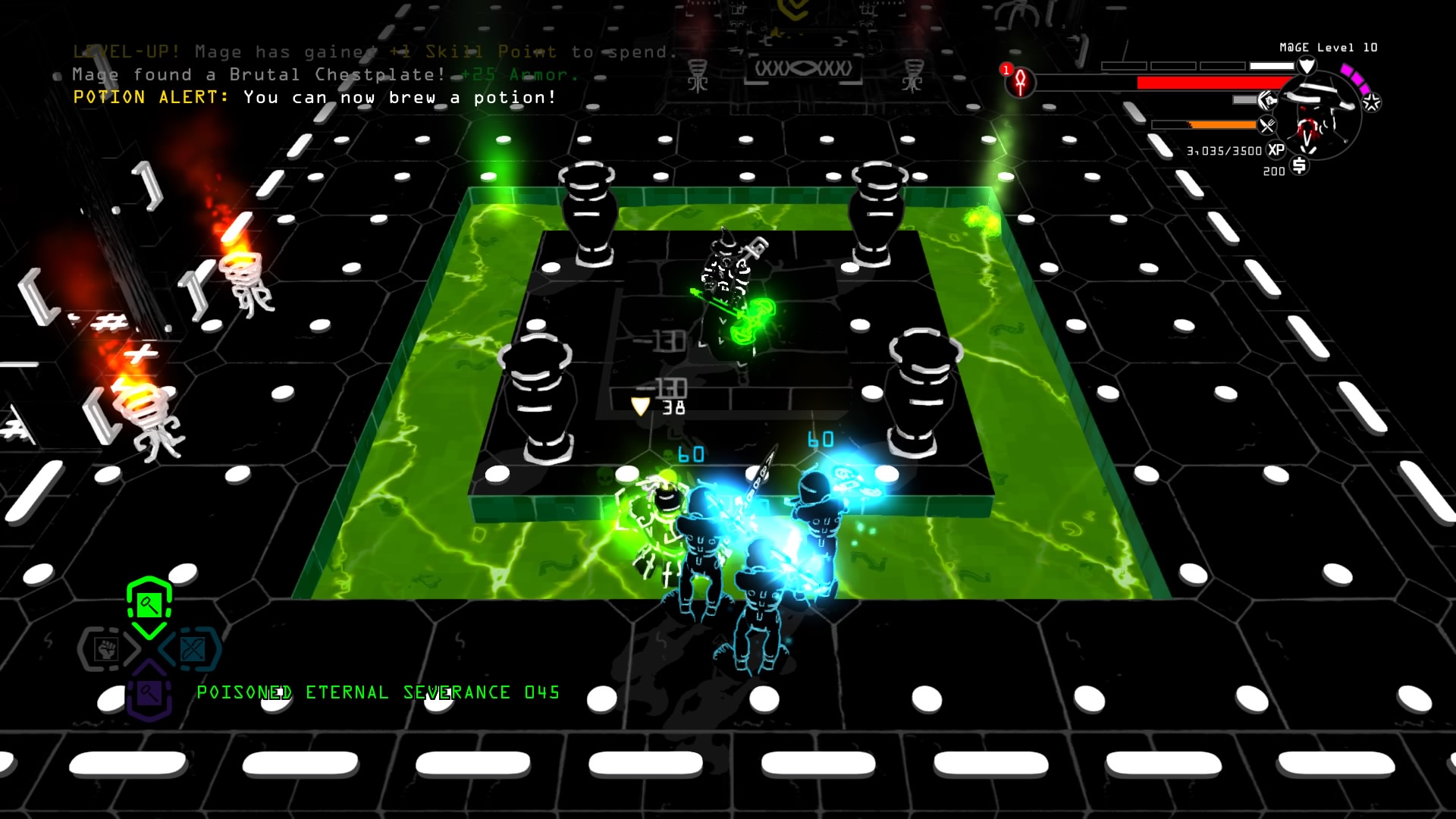 If you’re looking for story in [email protected], move right on along. I guess I could create a fake synopsis, but the game doesn’t have any plot to speak of. You’re a character made out of ASCII letters tasked with hitting other ASCII letters in a world generated of ASCII letters; make sense?

Invoking the style of old-school games, [email protected] doesn’t coddle the player with needless cutscenes or overbearing tutorials. You get a few screens describing controls and some other game mechanics and are sent into the fray. It’s a trial by fire and you’ll more than likely get burned.

The dungeon you enter features 26 randomly generated floors. Each floor is roughly 10 minutes in length, though you can speed run any floor if you are so inclined. You mostly enter rooms and look for the exit with very little in the way of puzzles or blockades.

Sometimes you’ll need to kill all the enemies to get a key or bash up a few pots to find one. Other times, you’ll have to make precarious jumps over bottomless pits on very slim platforms. Some rooms have poisoned floors and others have limited light.

When I mentioned Rogue earlier, I didn’t just mean from a visual standpoint. [email protected] is a roguelike dungeon crawler. Permadeath is a standard feature of that subgenre, so you better be okay with losing progress upon perishing. Seeing as how I’ve been highly addicted to The Binding of Isaac, I’m at least acclimated to this style of gaming. The similarities with Isaac don’t end at that single feature; [email protected] also has multiple character types and randomized levels. You get to pick between a Mage, Ranger, Amazon and Warrior. The only real difference between each class is starting skills.

There is a rudimentary skilltree, but the skills are identical between classes. The only major difference is that certain starter classes will unlock specific skills faster. By the later levels, you’re virtually indistinguishable from one another. 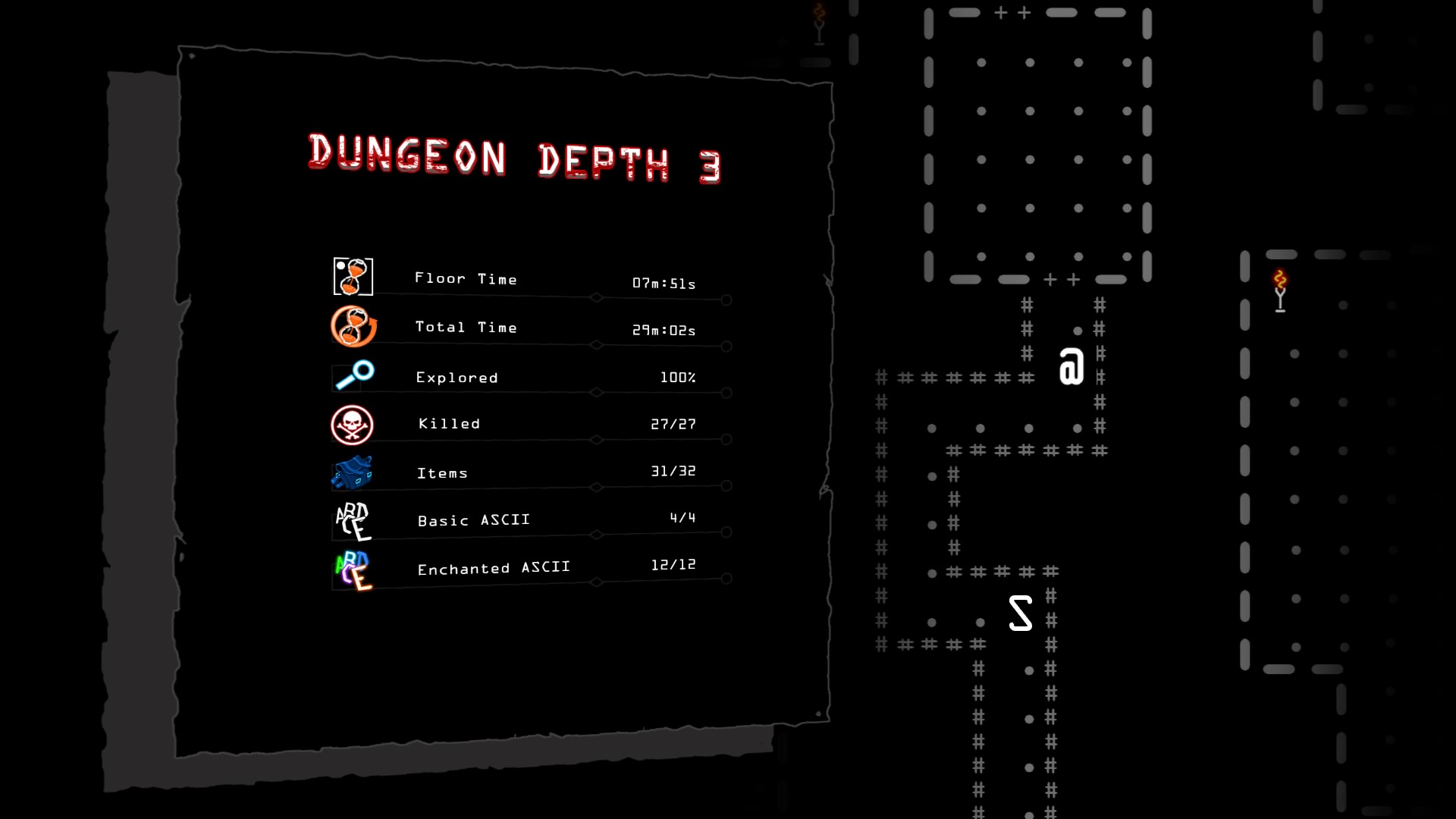 That being said, the Mage is the best class. You begin each floor with only a shield, an unlit torch, and your fists. Your only projectile is throwing your shield (which then bounces around for 10 seconds), except for the Mage. He gets a magic blast in addition to a magic shield.

You can craft potions and weapons based on collecting things. All weapons are made by finding various ASCII letters in the levels while potions are made by finding a bottle and some different ingredients. Along with the standard ASCII letters, you can also find enchanted ones. These add effects to your weapons with five different elemental properties: Fire, Poison, Arcane, Freeze, and Power (Lightning). The only major difference with each elemental effect is that it causes some damage over time; no enemies are weaker to specific types (save for zombies randomly requiring fire damage).

It’s strange to see a Freeze-powered enemy get killed with a freezing axe, but you can do it. Heck, you can even freeze the frozen guy. That’s some Inception level kind of redundancy. This goes for any of the different elemental enemies. Set fire to the burning guy; I’m sure he’ll feel it!

Some doors are blocked by elemental barriers, but they are never required to find the exit on any given floor. It mostly exists to rub the randomization in your face, since you may never come across the correct ASCII letters to unlock that element. 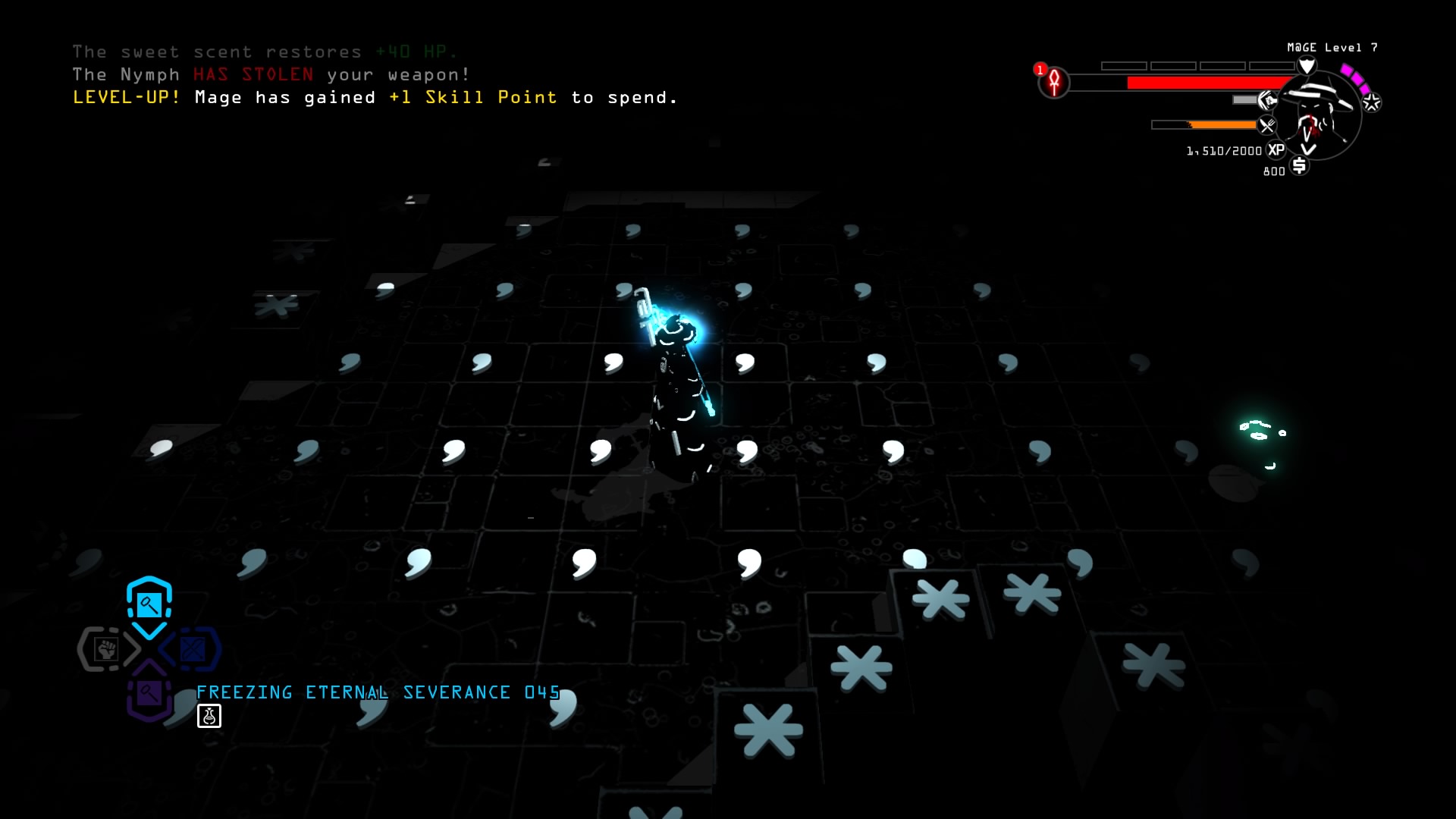 For that matter, weapons aren’t just crafted from ASCII letters alone. You need to find tomes that contain the recipe for the weapon, which then lets you craft it. This means you may end up without a weapon for quite some time, or you may find four weapons on the first floor. As for how the combat works, it’s basically just a button-mash fest. I’ve tried to get into the combat system, but I still can’t quite figure it out.

You, essentially, just hit Square and hope for the best. There is a dodge roll that can be initiated by holding the block button, but it’s incredibly finicky. Often times, I would just run up to enemies and pray I didn’t die.

I never managed dodge in my desired direction and I often rolled into a poison pit. For that matter, attacking more than one enemy is usually an exercise in frustration. Your character doesn’t lock on to anyone and trying to block the guy in front of you while someone from behind attacks usually leads to you taking damage (not to mention that blocking doesn’t fully negate damage).

Some of the harder enemies also have long combo strings that prevent you from moving if you block. You end up standing there like a jackass while you take small bits of damage, unable to retaliate. You can’t even perform your dodge roll, which never seemed to trigger in my mind. I fruitlessly tapped X and wondered why I was standing like an idiot. 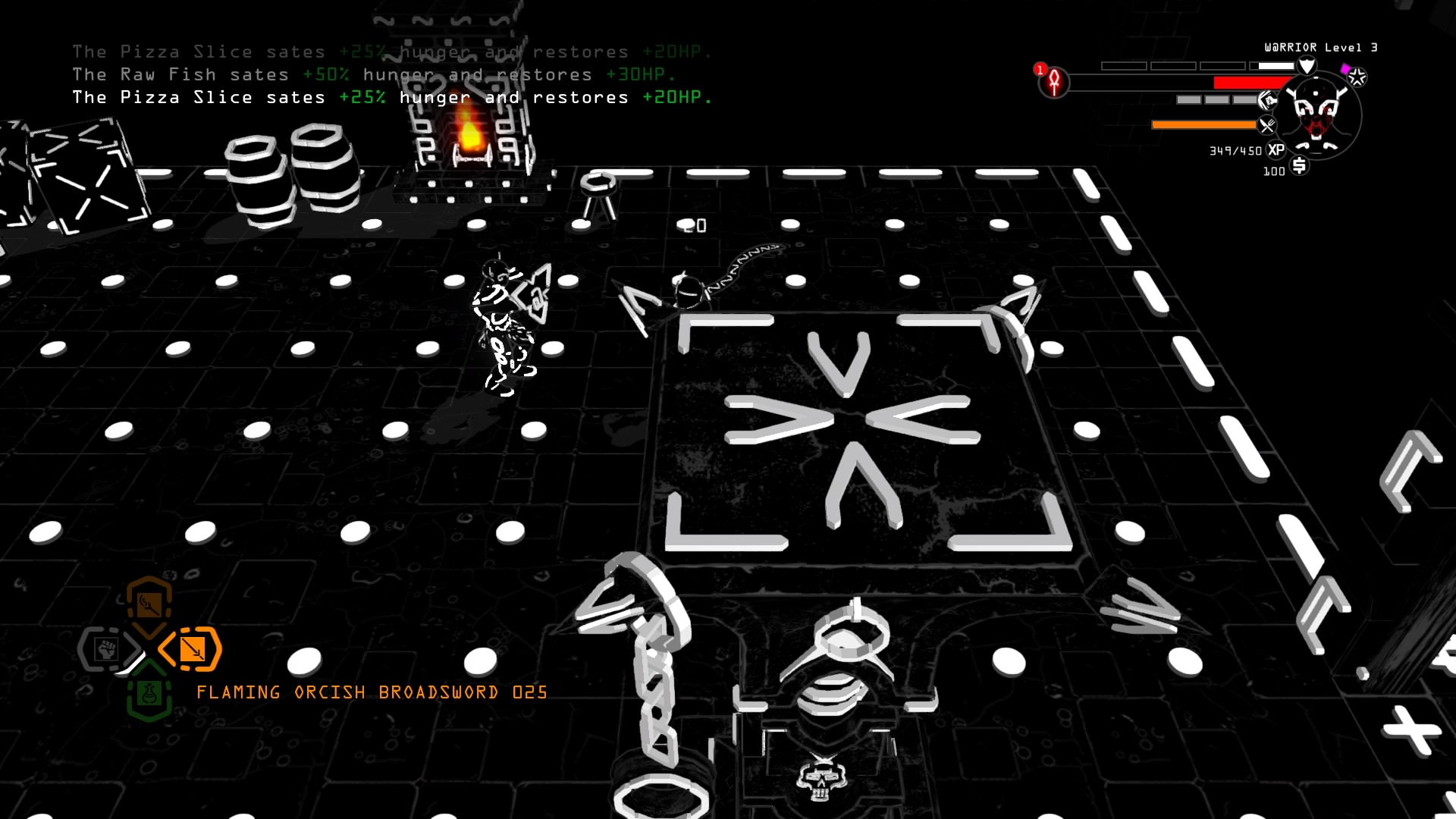 As for any kind of boss battles, there really aren’t any to speak of. Certain enemies are impervious to most of your attacks, but getting to the floors they are on is going to require a lot of patience. The general gameplay may not seem overly difficult, but the limited maneuverability and often obscured camera hinder you in a lot of ways.

Those random bottomless pits ended up being the biggest source of my failure. It’s really soul crushing to have a nice run of 13 floors and suddenly lose everything because of a poorly angled jump. If only the screen wasn’t blocked by an archway.

Bringing up that issue, I also can’t stand the rats/bugs that attach to your player. Sometimes smashing a pot reveals these critters and they just latch on and suck away at your health. They drop off after about five seconds, but it seems like a needlessly cruel way to drain the player of health. It’s especially infuriating since they blend into the ground pretty well.

If this sounds overly negative, I don’t really mean it to. I can’t claim that [email protected] is good, but it’s not poorly made. The combat is clunky, but it does function with small groups of weak enemies. For that matter, the frame rate is super smooth and the game never crashes.

This is pretty astounding since it is running on Unity. Nothing against that engine, but it has a ton of problems on PS4. Both of the previous Unity titles I’ve played (Broforce and Grow Home) had serious performance issues, but [email protected] only dips a little at the beginning of each floor. 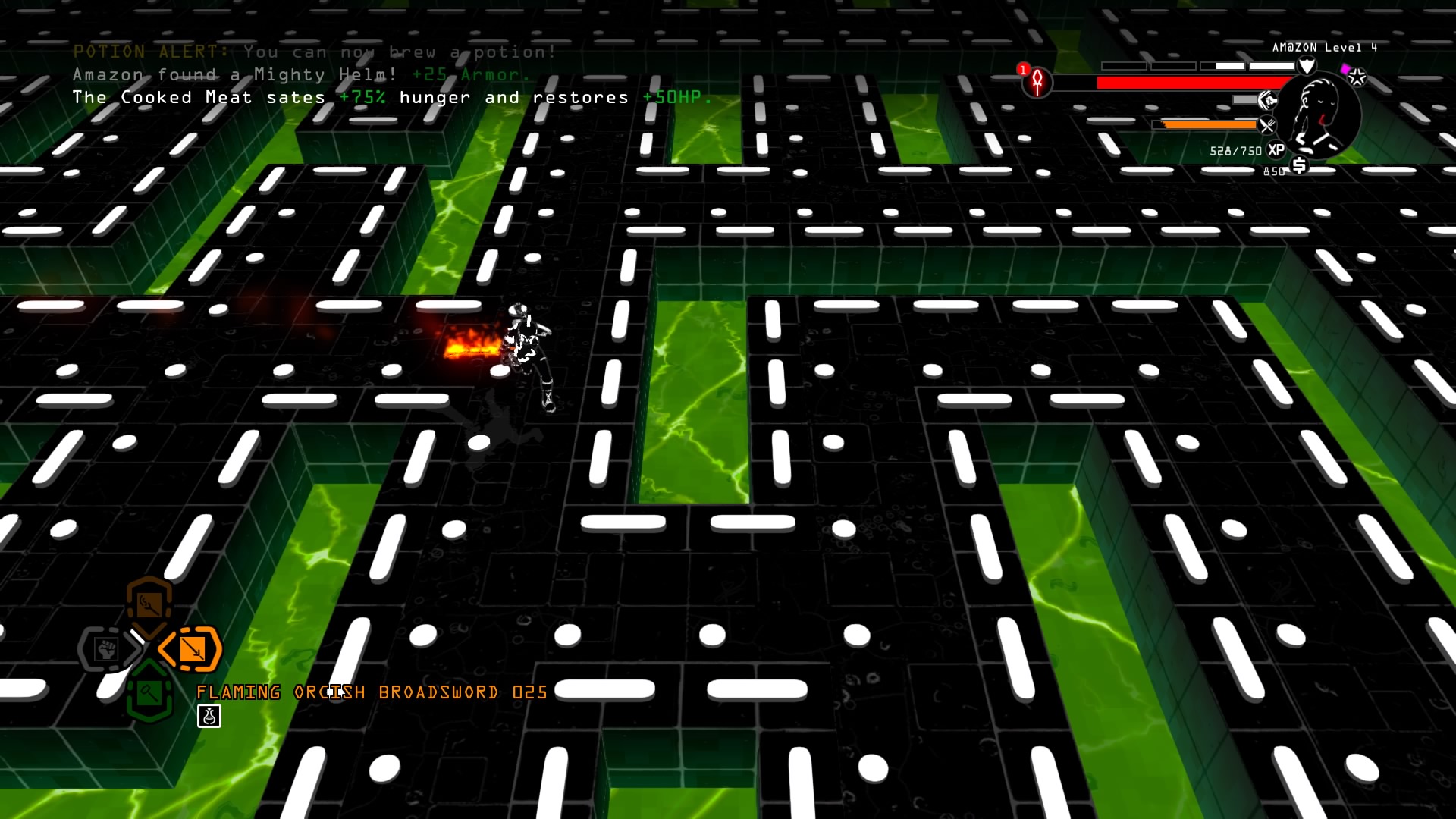 Even bringing in a second player didn’t hinder the performance. You’d think having two people on screen would incur some kind of drop, but everything remains the same. I’m not patient enough to play this cooperatively, but the function is available to those who want it. It’s relegated to couch co-op, so there won’t be any online lag to deal with.

The online functionality is limited to leaderboards and sharing custom made levels. Yes, that’s right; [email protected] has a small level editor. While you can’t create entire dungeons, you can make single floors that are then shared online for anyone to play.

The level editor is decently robust, allowing you to tweak room size, place enemies and items as well as adjusting light sources or hazards. You can, essentially, create an entire game’s worth of floors, they just won’t link together.

If you gel with the game, then I’m sure this level editor will be icing on the cake. I didn’t push the feature to a breaking point, but the only limitation seems to be some arbitrary money value. I’m not sure where it comes from, but placing some items take up greater amounts than others.

Still, as an extra feature, it’s really nice. I can’t say I wouldn’t have been overjoyed if something like Rogue Legacy had a level editor, so at least fans can test each other’s patience. 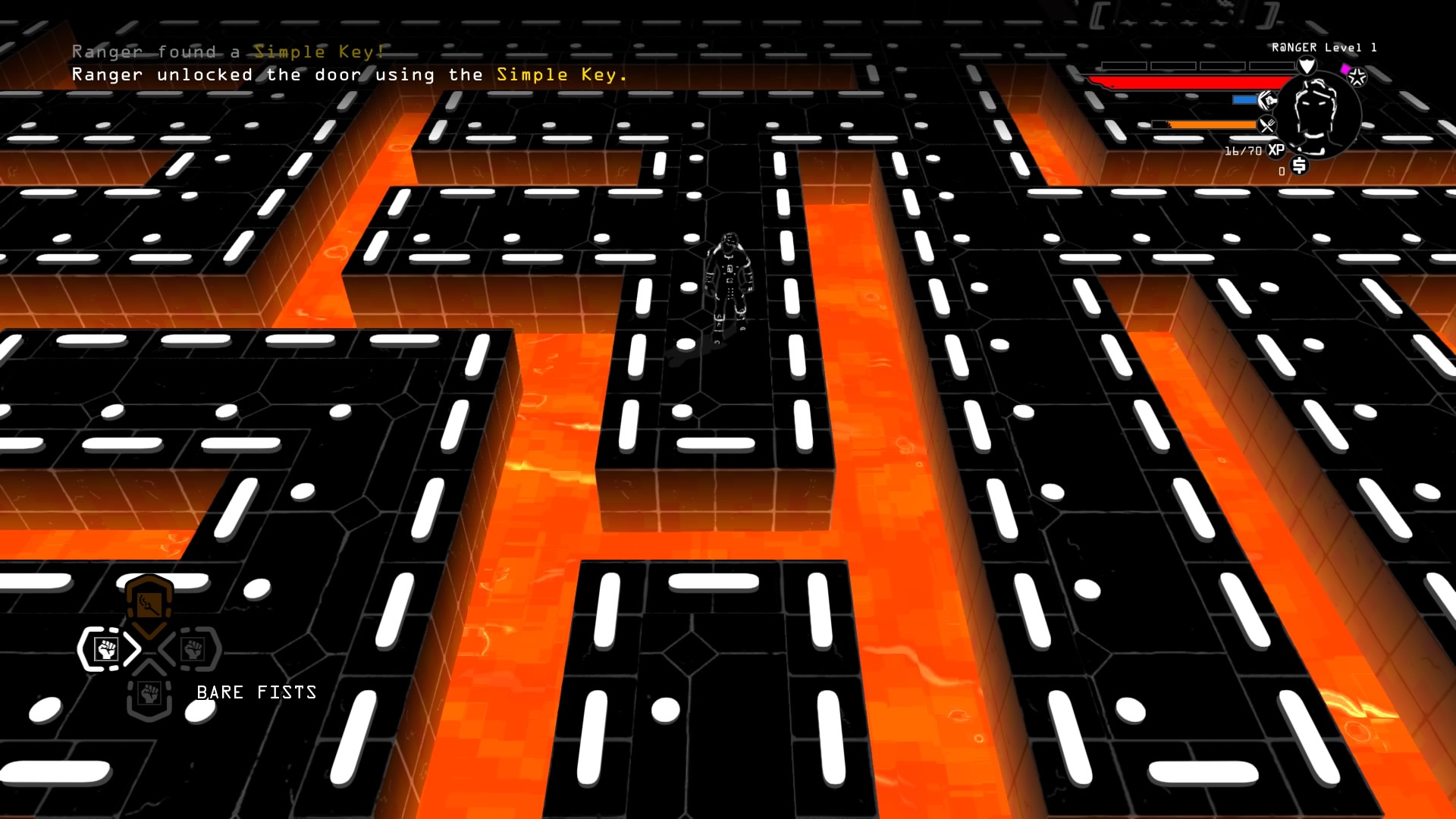 In regards to length, I have to admit that I can’t finish the game. The permadeath feature mixed with the awkward controls just creates too much frustration for me. I managed to get to around floor 20 before I couldn’t get any further and that was after 15 hours of gameplay. It could be shorter if you master it quickly, but I don’t see a lot of people having the patience to stick this out.

I want to love [email protected], but the combat mechanics and harsh punishments leave me sour. I can dig The Binding of Isaac because each failure unlocks something new. Even Spelunky allows you to skip ahead if you fulfill some obscure requirements in each realm. [email protected] asks for a fairly hefty amount of your time and then rips away your experience through a faulty camera or fidgety button press.

I’m sure with some more polish given to the combat, this could have been a real winner. All of the pieces are there to make something similar to the various other roguelikes on the market; the execution is all that is lacking.

With that being said, I can’t recommend this to all but the most diehard of genre fans. Even then, the art style may be lost on people who aren’t old enough to remember MS-DOS or a ZX Spectrum. That seems to be the most unique feature of the game.