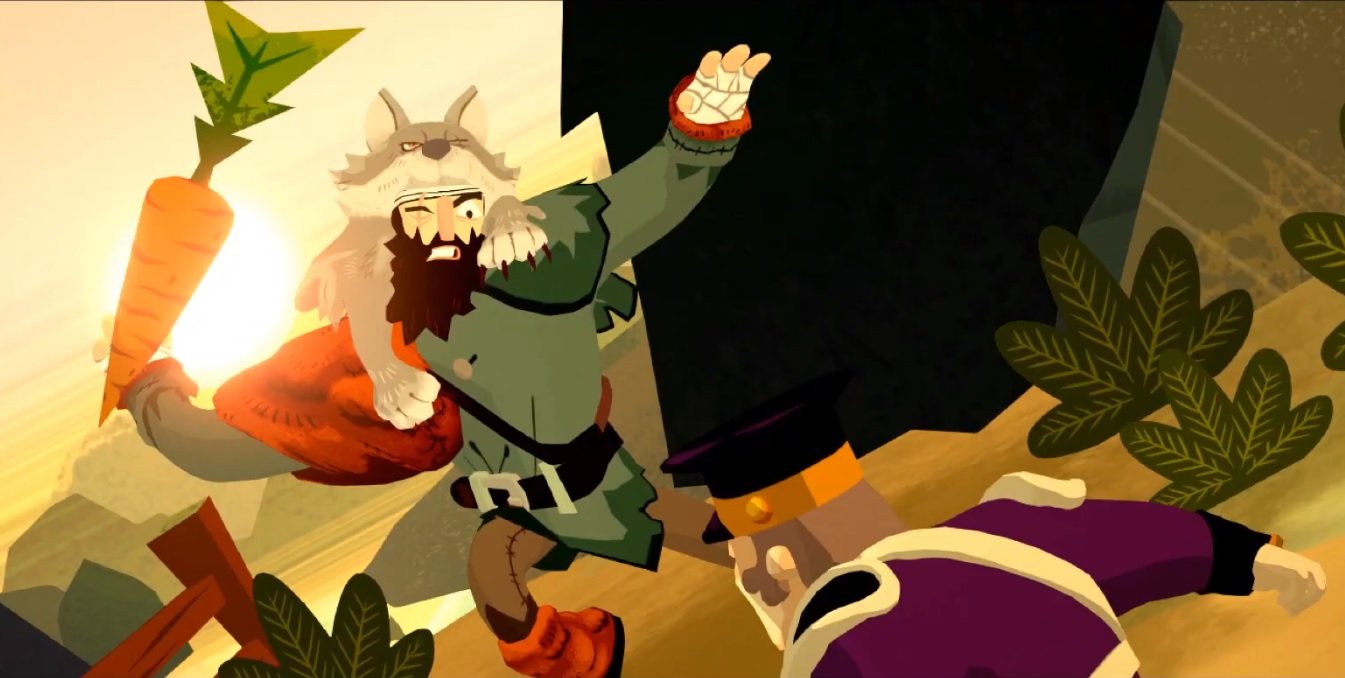 Taking the Improvised Weapons feat to the extreme

Okay, if I grab the hammer from that stump I can use it to take out two of those mooks guarding the shish kebab, then dash past the crush traps. The guy at the end of the trap line is wearing a pool floatie as armor, so I’ll have to use a ranged weapon to take him out, or else it’ll take two swings and I’d really rather drop him in one hit.

I’ll have to balance on the exploding barrel to avoid the spike pit, but would I do better to crash it into a dude and boost jump up to higher ground, or just use the cannon to gain altitude? No, wait, I can use this tiki torch to blow past those guys and take them from behind if I…

Crap, they got me. Let’s try that again.

Bloodroots is a heavily stylized, frantic beat-em-up which draws inspiration from games like Hotline Miami and Katana Zero, where a single mistake is as deadly for your opponents as it is for you. Your main goal in every level is to kill everyone before they can return the favor, though your motivation only becomes clear by playing through the story. When played well, it’s a blast bouncing from foe to foe in a ballet of homicidal fury. It’s a title I’ve been looking forward to since I first got to try it out a couple of years ago, and I’m pleased to say that in my opinion, it’s been worth the wait.

The two biggest selling points for Bloodroots are the striking animation style and the fact that nearly anything you see onscreen can be used as an improvised weapon. The game’s visuals were inspired by the work of Genndy Tartakovsky, particularly the Samurai Jack series. It’s extremely impressive in motion, and screenshots don’t really do the game justice. The final kill in each level is punctuated by a brief cutscene which slows down the action for a moment, no matter what weapon you’re using at the time. Most of the game’s unique weapons will trigger a different cutscene, so it’s quite entertaining experimenting with different options to see how you might end a man’s life with nothing but a dried fish, mandolin, or root vegetable.

Although your character Mr. Wolf is skilled with conventional weapons such as swords, axes, and firearms, it’s more entertaining to try killing foes with less common tools. Part of the fun is seeing how various items can be used to dispatch the army of thugs set against you by your former gang members. Wagon wheels can be thrown at enemies, or you can stand on one and ride it around like a top until it breaks. You can swing a giant hammer at your enemies, or use it as a piledriver to jump and take out several at the same time. A bundle of fireworks can be used to light enemies on fire, or used to double-jump. If you manage to time it right, you can do both at once.

Timing is critical to success in Bloodroots. There are separate buttons for picking up a weapon, using it, and jumping. While it’s possible to kill enemies with a single unarmed punch, doing so leaves you vulnerable for a moment, and that can be all your surviving enemies need to take you down. Each weapon has a limited number of uses, so you’re always encouraged to try something new and to keep an eye out for a new implement of death. The fast, frenetic gameplay lends itself well to speedrunning, and I’ll be looking forward to seeing experts do perfect runs at AGDQ. Fortunately, it’s possible to succeed even if you don’t have the levels memorized. Dying just makes the screen turn red and restarts your progress at the beginning of the current area, so you’re encouraged to get right back into the action.

One of the things that impressed me most was Bloodroots’ internal logic, and the way the cartoony physics make sense in this world. Throwing an oil lantern at an enemy will leave a trail of fire behind, and luring other enemies into this trail will set them alight. Roll a barrel through a campfire, and you can set a whole field of grass ablaze as you ride it like a steamroller. Crashing a haycart into a pine tree will knock it down, crushing anyone standing underneath and potentially providing a new angle of attack as you use the tree as a bridge. You can twirl a ladder around your head like a helicopter, which allows you to hover in midair and provides an opportunity to smash through a few enemies before it falls to pieces. If you come at a particular level thinking, “What would Bugs Bunny do?” there’s a good chance you’ll make it through in one piece.

While secondary to the action, Bloodroots has a story to tell, and it’s drip-fed through flashbacks and cutscenes in between the action segments. Mr. Wolf used to be a member of a criminal gang who all themed themselves after various beasts, and together they terrorized the wild West. After a disagreement involving a massacre in Tarrytown, Mr. Wolf turned his back on the other gang members, who attempted to kill him as a traitor. Mr. Wolf, understandably upset about all this, swore revenge against his betrayers. The spaghetti-flavored soundtrack helps sell the story, and these Western tunes set the mood so perfectly I didn’t mind retrying levels over and over to try and find a workable solution.

While there’s no multplayer option, Bloodroots does include online leaderboards for players who put up particularly good runs. Players are graded on how efficiently they move from enemy to enemy, how mobile they remain while doing so, variety of weapons used, number of deaths, and so on. There’s always a counter in the upper left of your screen which shows how high your kill combo is, and you can get bonus points if you refresh the combo just as it’s about to expire.

This adds a lot of replay value for those who want to absolutely perfect a given level, but there’s not much reason to return if this sort of thing doesn’t appeal to you. It’s still fun replaying levels to try out different combinations though, and there are some unlockable hats and other bonuses which change up the gameplay a little bit.

As much as I’ve enjoyed my time with it, Bloodroots does have a couple of problems which might make it less appealing to certain players. If you get frustrated easily, this probably isn’t the game for you. It’s pretty difficult, and if you aren’t willing to put some time in to learn the patterns you may become stuck on a section for quite a while. It can sometimes be hard to follow the action, especially on a smaller TV (or, presumably, the Switch’s handheld mode). The sheer amount of stuff onscreen at once means sometimes enemies and high-priority targets are hard to pick out. Additionally, the fact that you have to kill every enemy in an area before moving on to the next one sometimes makes the game feel more like hide-and-seek than it probably should.

While I admit it’s a very minor issue, I was surprised to read some of the language that came out of the antagonists’ mouths. It seemed odd that the tone seemed to shift from cartoonish, slapstick ultraviolence to brooding grimdark angst and back again so quickly. The previous stage had pinball bumpers in it, for Pete’s sake. Still, if you’re in it for the action and don’t care much about the story, you won’t be disappointed.

I did run into a particularly nasty bit of slowdown in one of the second level’s stages, but it didn’t show up until I had died several times during the same stage. It made the normally fluid animation look more like a slideshow. Fortunately, resetting the game took care of the problem. Unfortunately, I did lose some progress since I had to play this level from the beginning. I presume this will be patched soon, so I hope it won’t affect too many people before then.

Despite some minor flaws, Bloodroots is a manically fun game that oozes style. Discovering new and unique ways to use the extremely varied arsenal to my advantage kept me coming back again and again. Even when I died (and believe me, I died plenty), I was thoroughly enjoying myself. If you’re in the mood for a fast, stylish action game with plenty of challenge, Bloodroots might be just what you’re looking for.