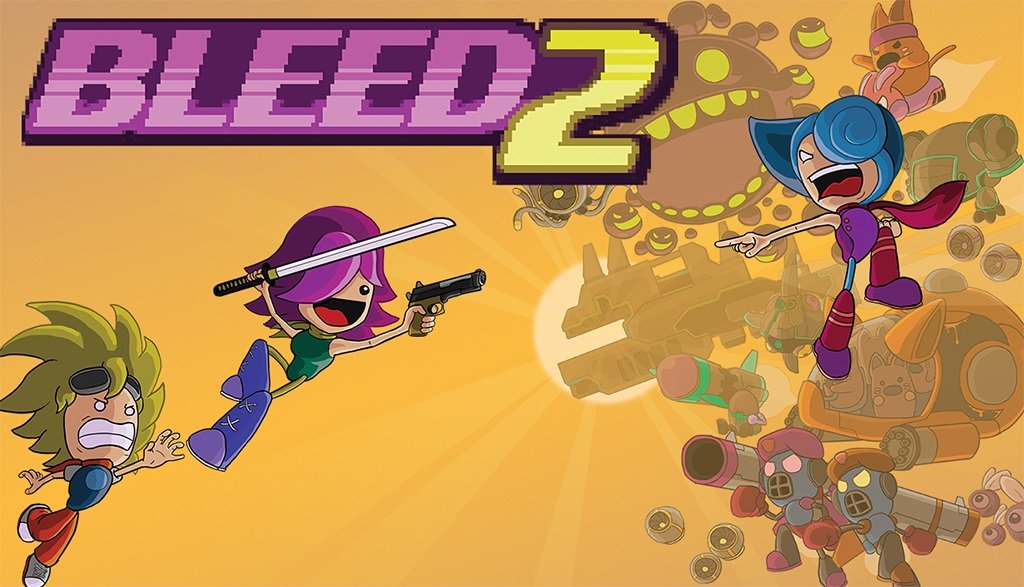 When Bleed came out in 2012, it was a great throwback to run-and-gun platformers of the late ’80s and early ’90s like Contra and Metal Slug. The sequel looks a lot better, builds on the foundation established in the first game beautifully, and adds some welcome new features into the mix.

In the original Bleed, pink-haired protagonist Wryn set out to become the ultimate video-game hero by defeating all other heroes on Earth. Her plan worked flawlessly, and she’s been enjoying the accolades and adulation every since. But the rest of the world’s heroes were the only thing keeping a massive alien armada from invading, and with them out of the picture, the aliens see Earth as ripe for the plucking.

With no other defenders available, it’s up to Wryn to beat back the alien menace and save the world. Fortunately, she doesn’t have to go it alone, since you can play this game with a friend. 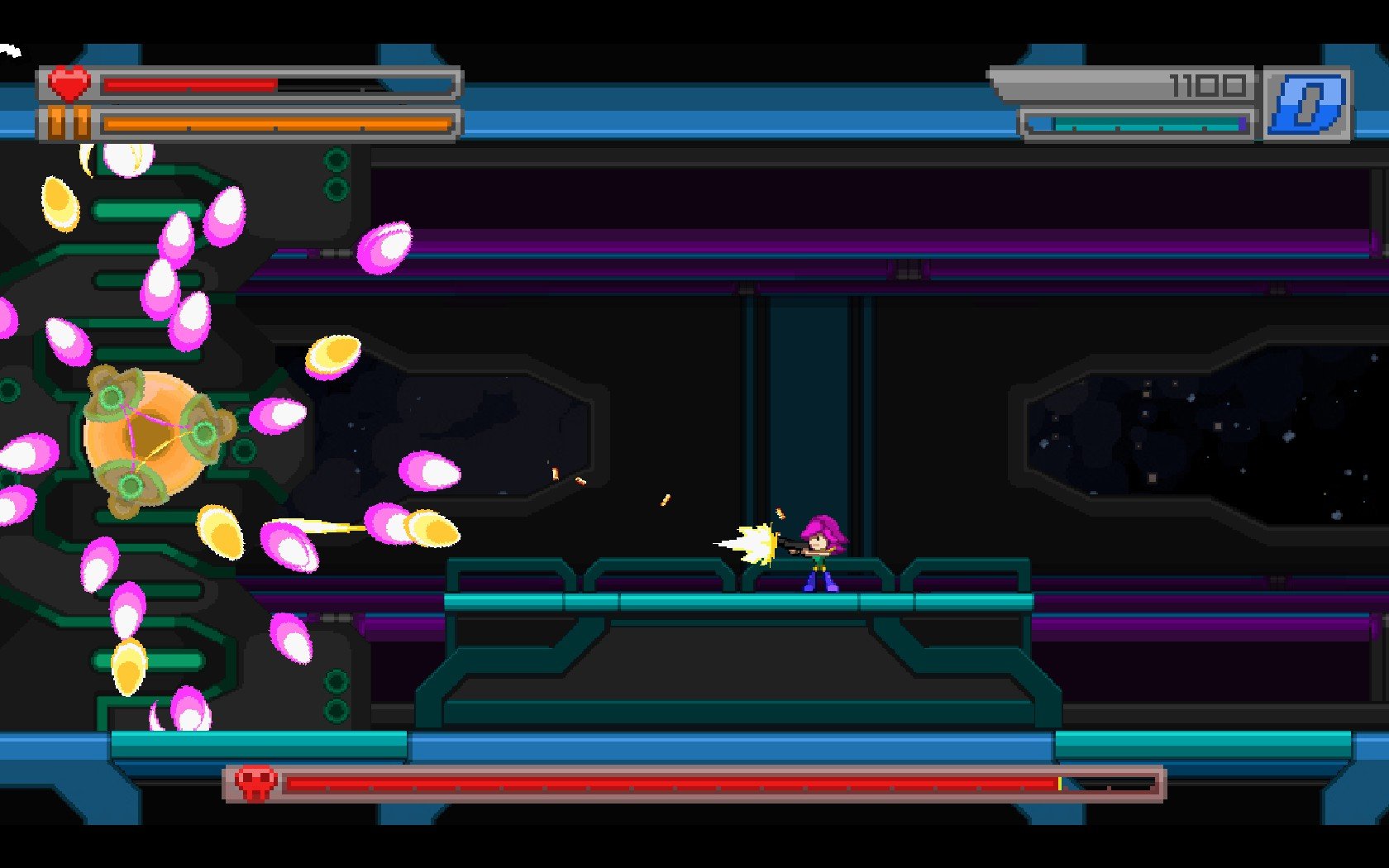 Wryn is a capable heroine who borrows her arsenal from Deadpool, wielding twin pistols and a katana. You have unlimited ammo, and can fire a stream of hot lead using the mouse or the right stick on a game pad, moving with WASD or the left stick. Wryn can jump three times before hitting the ground, and can also wall-kick by hitting Space or the right trigger. Jumping in midair allows her to boost through a projectile or obstacle, though it’s usually better to avoid them entirely. What sets Wryn apart from other run-and-gun game protagonists is her ability to reflect bullets and attacks using her katana. Letting up on the stream of fire for a moment and then beginning the attack again will cause her to briefly swing her blade, slicing anything nearby and also deflecting any projectiles that match her hair color. She can also slow down time briefly, which helps the player react to some of the more ridiculous fire patterns you’ll be exposed to.

I came into Bleed 2 having never played the original, but that’s something I intend to remedy. I first became aware of the title at PAX West last year. I got to try an early version of the game in co-op mode, which is the best way to play it. Aliens and their allies will shoot two colors of projectiles at you, and you can deflect the color that matches your hair back at them. If you have a friend along, you can keep each other from being hit by focusing on the projectiles that match you, sort of like a two-player version of Ikaruga. Even if you’re playing solo, there’s plenty of incoming fire to reflect at its source.

Bleed 2 is a lot like Contra: Hard Corps, or for a more recent comparison, think Comic Jumper or Mercenary Kings. You’ll fight your way through a short level crammed with enemies, and then take on a boss where you’ll need to figure out the pattern and adapt your attacks to defeat it. You’ll move from setpiece to setpiece this way, and several of these are very creative. All of the boss fights come down to shooting the core, but each has a gimmick or three that help make them memorable. You’ll fight a helicopter stuffed with evil kittens while jumping from car to car, a massive laser drill while digging yourself a path underground, and a skyborne mad bomber while using live missiles as platforms. 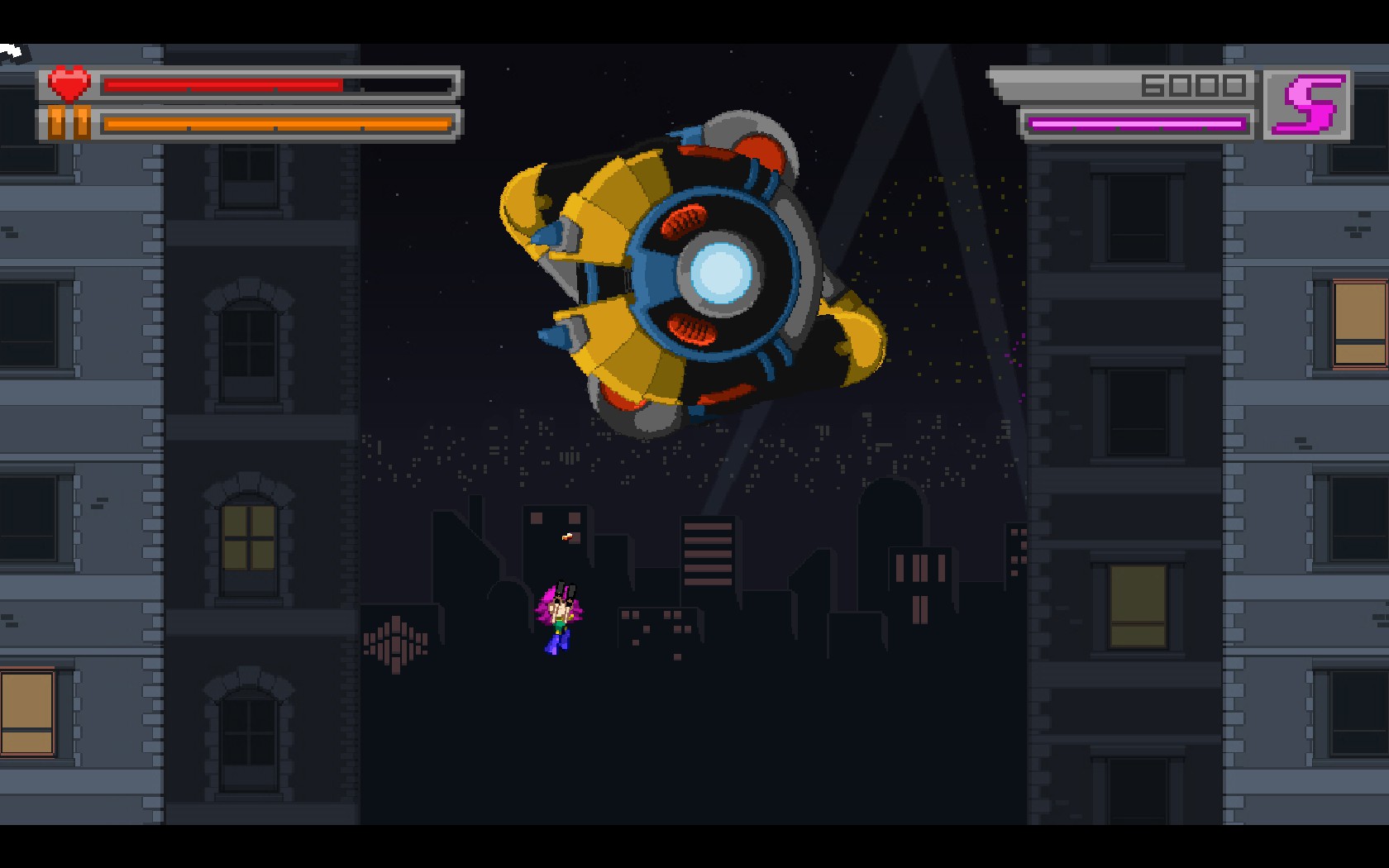 I had a lot of fun with Bleed 2, and there’s plenty to do here if you enjoy the gameplay. Beating the game once unlocks several new characters to play as, including the claw girl from They Bleed Pixels. There’s also an option to try and fight any three bosses simultaneously, a hardcore mode where you have to beat the game on a single life, and “mutators” that let you change some of the rules. These mutators reminded me of a time when cheat codes weren’t something you paid for as DLC, and they do some neat stuff like making the hitboxes visible on screen, taking away the ability to parry projectiles, or giving Wryn infinite slow-mo powers.

Though there’s a lot of ways to play Bleed 2, it isn’t the longest game in the world. I got through my first playthrough in about an hour, although I admit I was totally abusing the checkpoints and infinite continues. Bleed 2 seems to be perfect for speedrunners and score attacks, and encourages the player to get better by constantly showing their current rank in the top right of the screen. Getting hit even once can drop your rank by two stages, so clean, flawless playthroughs are necessary if you want to top the leaderboards. 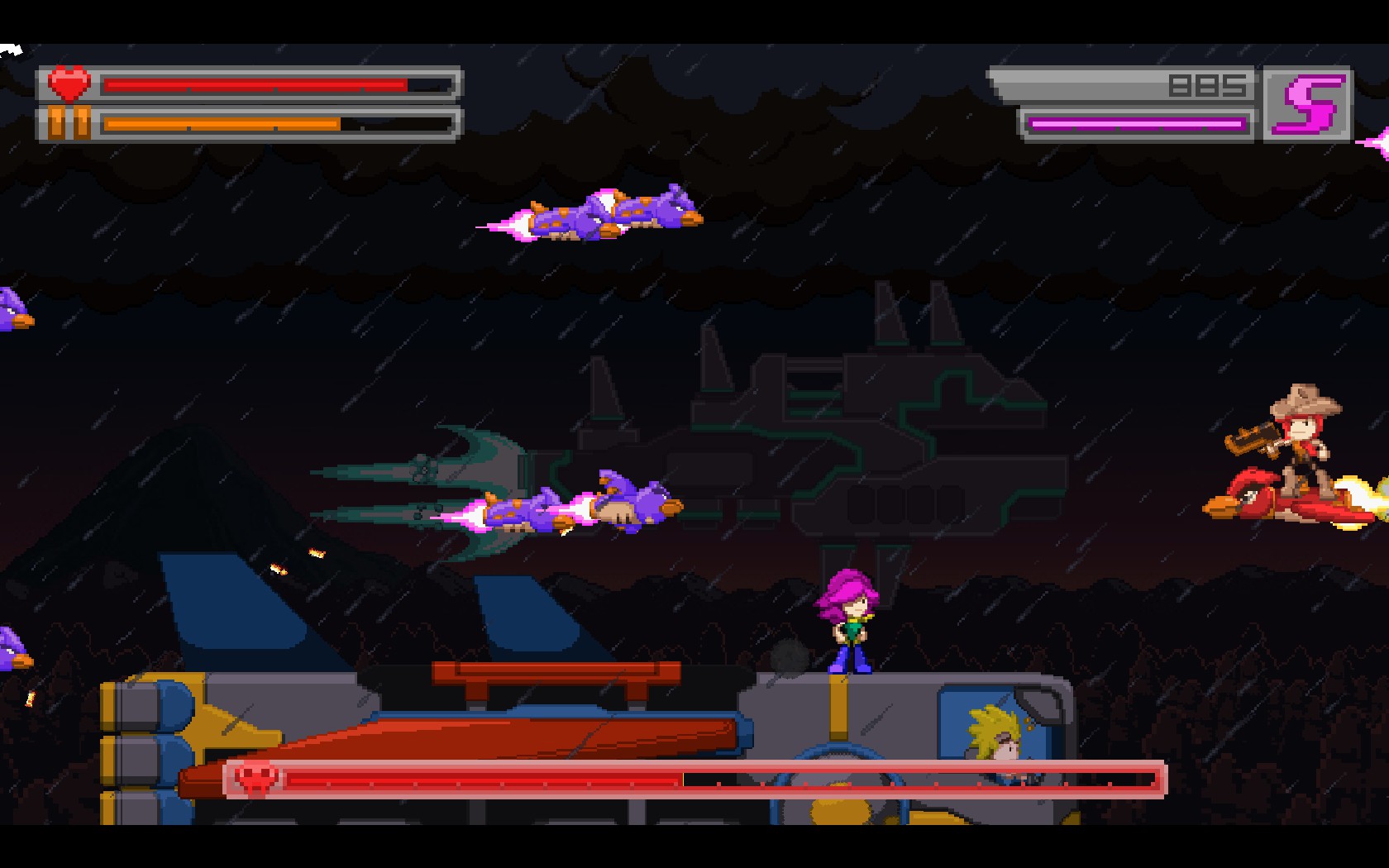 Bleed 2 manages to feel accessible while still rewarding precision and accuracy. It plays wonderfully, and you can enjoy it as a light co-op experience or really break it down and dig in to master its intricacies. I’d definitely recommend playing with a controller, but if you’re looking for a fast-paced platformer with plenty of action, Bleed 2 has you covered.