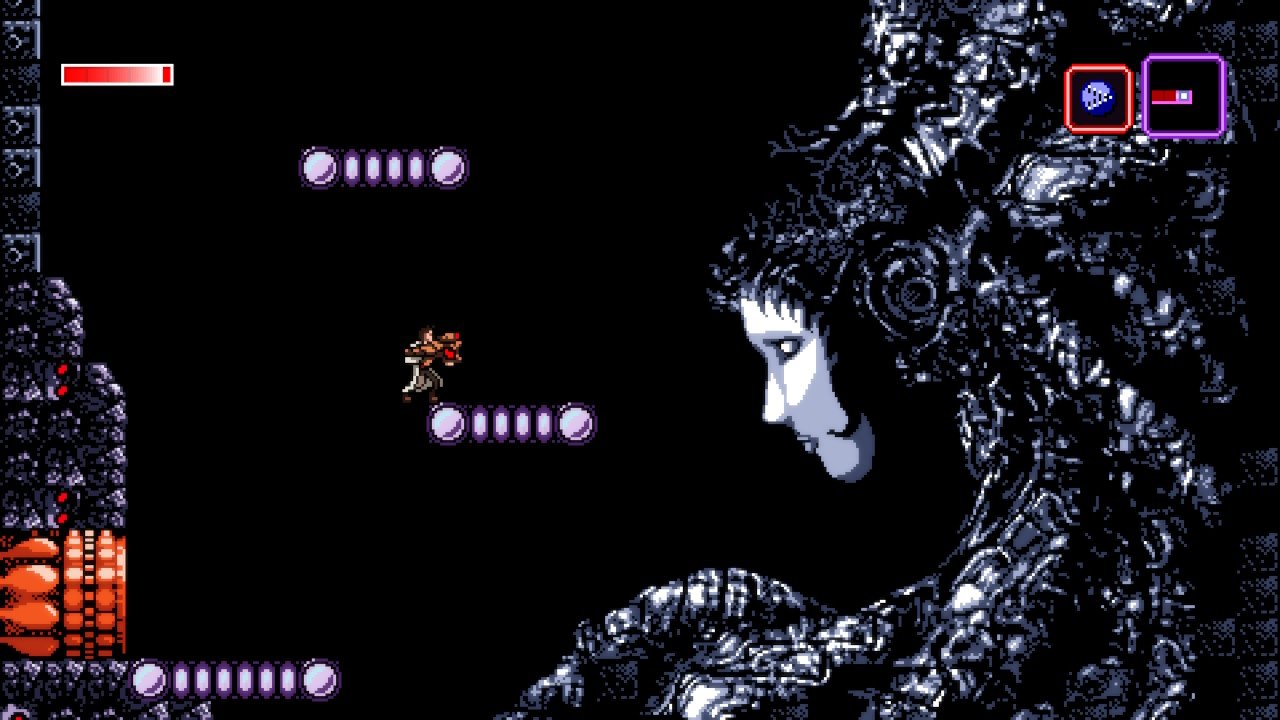 Glitch on a Switch

The original Metroid casts a long shadow, and it’s clearly had an enormous influence on current-day game creators. The concept of an interconnected world where progress is gated by your abilities never really gets old, and it’s resonated in the minds of those who grew up in the 8- and 16-bit eras. There’s no question indie breakout Axiom Verge is a love letter to Metroid, but it also borrows from other classics like Contra and Bionic Commando to create something more than the sum of its parts.

Last month was great for fans of Metroid-style gameplay, as we got the fantastic SteamWorld Dig 2 as well as the long-anticipated, well-executed reimagining of Metroid II. Axiom Verge has been ported to almost every system available since its launch in 2015, and it still holds up great on Nintendo’s latest hardware. 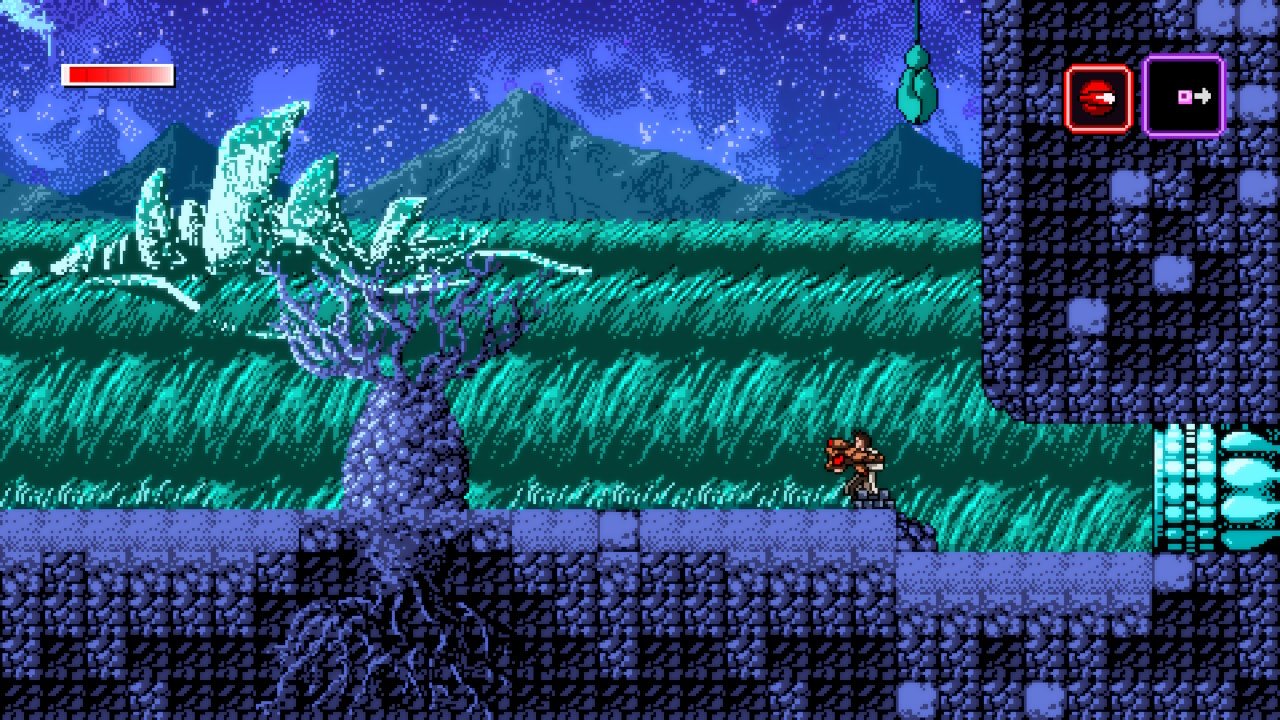 Axiom Verge follows Trace, a scientician who wakes up on a distant planet called Sudra after an accident seemingly inspired by the opening of Out of this World (a.k.a. Another World). After a brief conversation with one of the planet’s inhabitants, he discovers an amazingly adaptable weapon which becomes his main tool for exploring Sudra. He doesn’t take long to decide that he’ll use this new power to join the fight against a machine blight sucking the life out of Sudra and its denizens.

That weapon, the Axiom Disruptor, may be one of the most versatile implements of destruction I’ve ever controlled in a video game. There are more than 20 configurations you can find and experiment with, though I admit I defaulted to a few favorites like the Nova and Tethered Charge (basically an electric yo-yo) once I found them. The Axiom Disruptor can also equip upgrades that help further your progress, such as a short-range drill beam used to clear away small rocks, or a drone launcher which can help Trace explore areas he wouldn’t normally be able to access. The most interesting upgrade, however, has to be the Address Disruptor, or “Glitch Gun.”

The original Metroid was somewhat infamous for its many glitches, code which was never intended to be seen but made the game behave oddly when the player went out of bounds. Axiom Verge takes that idea and runs with it, allowing players to find shortcuts, create stepping stones, and mutate almost every enemy into a form with different behavior and a new sprite that looks like corrupted data. Doing so can cause enemies to clear a new path for you or may make them much more difficult to deal with, so figuring out when it’s best to use the glitch gun is part of the fun.

The idea of using glitches as a game mechanic works well, and it carries over into some of the other equipment Trace finds. I’m not sure why a lab coat allows him to phase through small walls and barriers, but every time I did it I felt like I was making use of a devious exploit to cheat the system. That feeling was amplified when I discovered optional glitch rooms, difficult platforming sections off the critical path which further reward exploration. 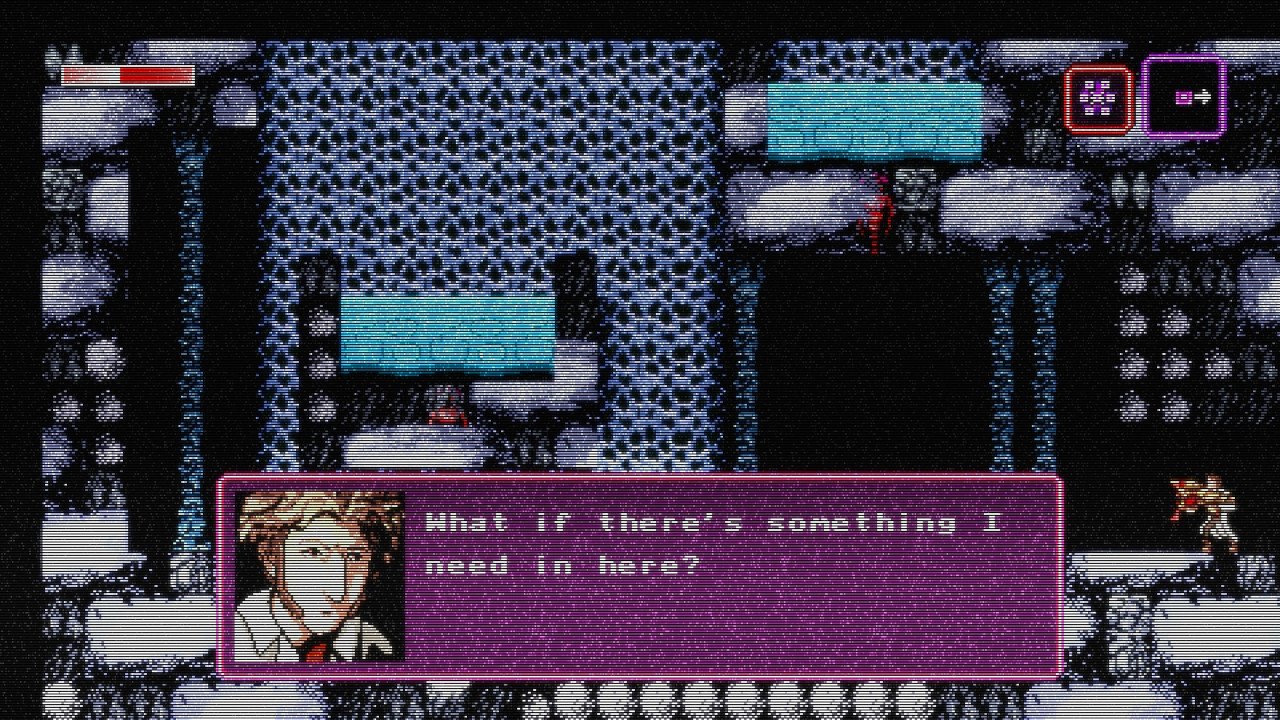 Axiom Verge was inspired by 8-bit games, but the art style is somewhere in between 8- and 16-bit graphics, sort of like what the developers of Shovel Knight called “NES Plus.” All of the spritework on display is incredible, and you really get a sense of technologic and organic entities melding together in varying states of harmony and discord. Bosses are especially stunning with dozens of moving parts and patterns that must be exploited, preventing the player from brute-forcing any encounters. It looks strikingly beautiful in handheld mode, though I did notice some brief stuttering while playing it docked.

I played through the PC version of Axiom Verge when it initially released, and the Switch port is a faithful rendition of the earlier versions. Unfortunately, this means all the flaws are still there too. Trace isn’t particularly relatable as a main character, and it’s still a little too easy to get lost in the sprawling catacombs beneath Sudra. I would’ve really appreciated another pass at the map system. If you’ve already played through Axiom Verge on another system, you might want to wait for a sale before double-dipping. 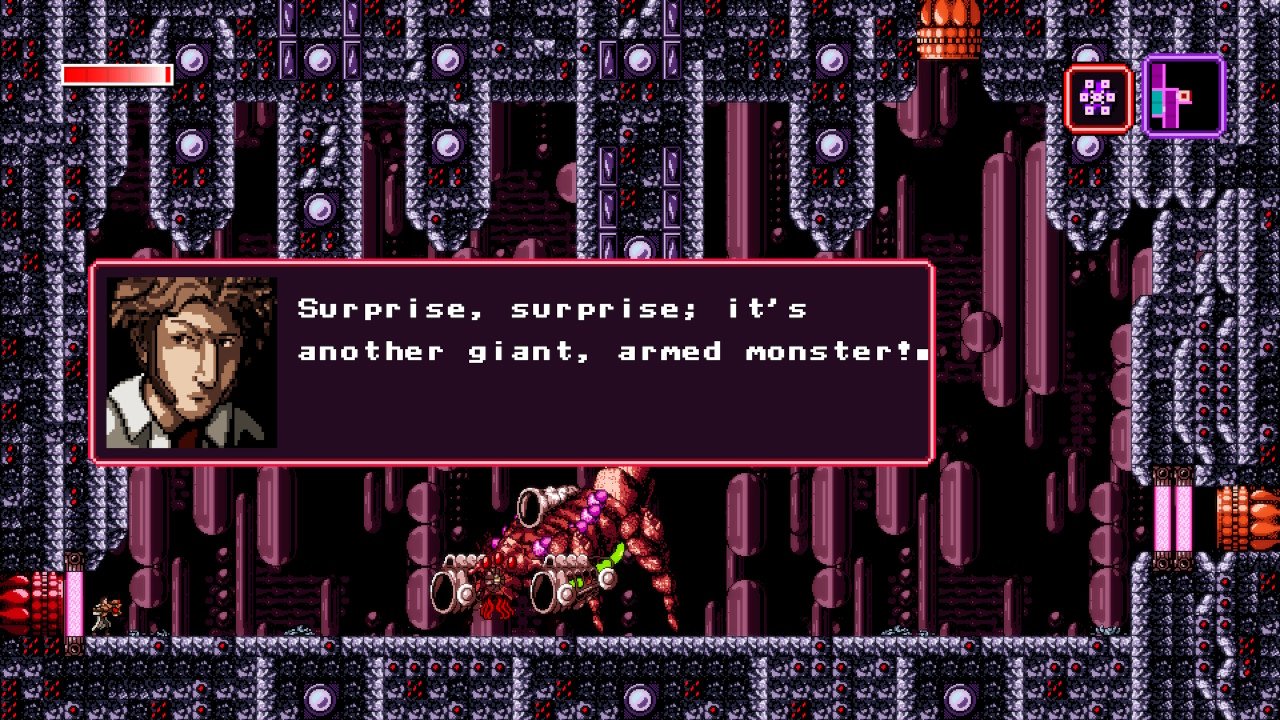 The Switch port doesn’t add anything new other than the ability to choose whether to play in docked or handheld mode, so it’s up to you whether that’s enough reason to revisit the title. I’d encourage reading through our original review if you’re still undecided. Axiom Verge works great as a portable game, and while it’s been available before on the Vita, I feel like the Switch is the best possible platform since it looks spectacular in handheld mode and works beautifully as a sit-down, console experience. Even if you’ve played another version, this is still a fun, fast-paced exploration game that holds up quite well and is certainly worth your time.